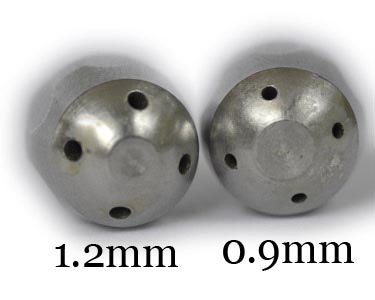 As with most double boilers the VII does well in the steaming department. The VII comes with a stock four hole tip with 1.2mm holes. This tip is great for larger amounts of milk but may in fact be a bit aggressive for smaller amounts of milk. A smaller four hole 0.9mm tip is available. This tip works well for smaller amounts of milk. So what does all this steaming power buy you besides the ability to boil milk in less than a minute? Before answering, please allow for a short review of what’s happening when you’re frothing milk (for one of the best-written articles on the subject, see The Milk Frothing Guide by Aaron De Lazzer).

Frothing requires high-velocity dry steam to introduce air into the milk. These teeny-tiny bubbles are called “microfoam” and give the rich flavor and texture sensation to milk that we adore. The smoothness that delights the tongue is analogous to the same sensation we experience when eating ice cream. As we all know, there’s little pleasure in trying to eat a solid block of frozen cream. First you must add some sugar, whip in some air (about 15% for premium ice cream and as much as 50% for frozen custard), and voila, America’s favorite frozen treat. Making the smoothest, creamiest lattes and cappuccinos is about a similar result but by way of a different process. Simply stated, it requires introducing air forcefully and without too much water into cold milk.

Why does it matter if too much water is introduced along with the steam? A little water won’t dilute the flavor noticeably for larger quantities of milk but it does drive up the temperature more quickly than drier steam would. Speeding up the rise in temperature with hot water leaves you less time for the first phase of frothing called “stretching.” The milk accepts air more readily when it is cooler. Depending on the desired microfoam texture, the stretching phase continues anywhere from 80 to 110°F after which the last phase of heating, called “texturing,” finishes the process by raising the milk to its final temperature of around 150°F. The texturing phase requires creating a vortex with the steam jet to help break any larger bubbles that may have inadvertently formed. Nobody wants to have soap bubble-sized foam in their milk, it tastes dry and airy. Bleech!

The table below summarizes the performance of these two machines heating water from 40 to 160°F. The VII tests were done with both the stock 1.2mm tip and the optional 0.9mm tip.

Seconds required to heat water from 40 to 160 degrees Fahrenheit

If you have previous experience with other lesser capacity machines and have the stock 1.2mm tip, expect to spend some time relearning your old techniques, since the increased volume and speed don’t give you much time for finessing the development of microfoam. With only a little practice, I was able to steam great microfoam for single servings; as the table above suggests, it only requires 10 seconds or so of stretching followed by a mere five seconds of spinning for such small quantities. You will need to focus to avoid overheating the milk or creating too much foam. You may start out by practicing with water and observing the turbulence patterns, learning to alternate between the dead-center position for the standing wave when stretching and the close-to-the-side position when spinning.

Smart ergonomics are responsible for a lot of that elusive “je ne sais pas quoi” which separates the mundane from the extraordinary. The VII scores well with its large steam knob that sports a rubber grip and quick, crisp closure. Two fingers can snap it shut easily and the ¾ turn from off to full throttle leaves plenty of margin for finessing the steam output. This comes in handy when you want to steam with smaller amounts without accidentally painting the kitchen walls with milk. The VII steam arm mates evenly with the tip, that is, there is no ridge between the wand and the screw-on tip, so it wipes perfectly clean every time.

The VII steam arm moves freely on a swivel joint. With the S-curve shape of the steam arm, it reaches to the bottom of a 20oz pitcher without difficultly and tucks away to the back of the drip tray when not in use. A fair amount of condensed water is trapped in the curve between uses, so remember to purge the wand extra long (a good five-second blast). The wand gets very hot, a rubber sleeve is installed to allow you to move the arm without getting burnt. You can order an optional no burn wand for the VII. These arms have a Teflon sleeve in them to keep them from heating up on the outside. The arm is a bit longer if you want to reach deeper into larger pitchers.

The VII’s large boiler shows off again in this run-off. The flow rate is considerably higher than the La Valentina, topping eight ounces in 10 seconds at 203°F. Americano lovers will be thrilled. Even those who wish to make instant soup or tea won’t have to worry about draining the boiler down too quickly. The water tap is fixed over the drip tray, so it’s easy to quickly rinse the portafilter. Do pay attention when you first use it—the flow is much faster than prosumer machines and it does sputter a little. Sometimes I like to add a half-ounce of water to an espresso that wasn’t “just so” to smooth out the flavors. That’s tricky with this water tap because of the high flow rate as well as the reaction time of the electronic button. Pressing and releasing the button starts the flow and a second press / release stops it, so you have to be very fast if you want only one ounce.