The VII is controlled by a panel of five buttons with a row of colored LEDs above them. The BOILER light on the far left flashes when the steam boiler is below temperature. Next is a series of three green, three yellow, and one red light that indicate the brew group temperature. When illuminated, the ECON light on the right indicates that only one boiler will heat at a time with the group boiler having priority. Finally the ON/STBY light indicates if the unit is on (solid) or off (flashing). The buttons that fill out the rest of the panel are, from left to right: Water tap, programmable one cup and two cup dosers, steam boiler power, and the on/off power button. To the VII's credit, its thick rubber buttons have a solid feel to them compared to flat membrane buttons that are typically found on other automatics.

A three-second hold-and-press of the ON/OFF button gets things started. The display flashes briefly to verify all the indicators work and then the current temperature and ON/STBY indicators illuminate. Both boilers will start heating if you have the 20 amp version and the ECON indicator isn't on. The BOILER indicator will flash to show that it's below temperature. The steam boiler was ready in about fifteen minutes. Progress towards the selected brew temperature is indicated by successive flashing and then solid lights (e.g., first the 91°C light will flash and then illuminate continuously, followed by the 92°C light flashing and then illuminating continuously and so on until the target temperature is reached). The brew boiler will reach its target temperature before the steam boiler but the rest of the group requires a good 25 minutes to finish warming up. Remember the number one rule of temperature stability is getting everything to the same temperature, from boiler to portafilter.

Chris has rewritten the original manufacturer's instructions. They are very readable and easy to follow.

The instructions enclosed with the machine suggested setting the auto-dosing while pulling a shot. I personally set the single button for a long pour. Since I don't pour many singles I use this for rinsing the portafilter and warming the group.

To program the one-cup button for a long pull, place a cup under the grouphead, and then press and hold the ON/OFF button for three seconds to enter programming mode. Then press and release the one cup button and draw three ounces or so. Stop the flow by pressing and releasing the same button. You end the programming mode by pressing the ON/OFF button again.

As was mentioned earlier, the basket for the VII is 53mm in diameter. It is quite deep, about the same depth as the La Marzocco triple basket. Before settling, grounds level with the top of the double basket amount to approximately 16 grams a good measure for the VII. Tamp the portafilter with about 30 pounds of force and lock it into the grouphead. Follow the same procedure for the double shot as you did for the single only cut it off at about 2 ounces. You now have set both dispensing buttons.

As I mentioned earlier, setting the brew temperature for the VII is a breeze. This is accomplished by pressing and holding the ON/OFF button while the machine is on for three seconds to enter programming mode. The current temperature setting will then blink. To adjust it, you press and release the water tap button once to rotate through each of the seven degree increments (i.e., 91°C, 92, 93, ... 97, and then back to 91°C). My suggestion is to use 93°C as a starting point.

Preinfusion can be programmed on the VII from 0 to 9 seconds in one second increments. The programmable version works by opening the intake manifold to let water into the group at line pressure then turning on the pump after the preinfusion interval. Chris also sells a progressive preinfusion chamber that has a fixed interval of six seconds.

The 0, 3 and 6 seconds shots tasted pretty much the same with a bit of additional brightness going to the pre infused shots. The 9 seconds shots were quite sour – a lot of channeling starting to take place as the puck falls apart. The added consistency for me makes the upgrade worthwhile. That is one good thing about Chris's Vivaldi line – he has kept the upgrade path open for a number of his improvements across all the La Spaziale Vivaldi renditions.

The offset temperature is the difference in temperature between the group boiler thermostat and the group. The offset is setup so that your temperature display matches the temperature of the espresso not the boiler. This setting is set up by Chris on the bench before shipping but it can be programmed at home. Setting the offset is pretty straightforward: with your machine in stand by mode press and hold the boiler button for about ten seconds. The boiler light and stand by light will start flashing. To increase the off set from +0/+8 degrees you push the single cup button to decrease the off set from -0/-8 degrees you push the double cup button. Each time you push button it will decrease/increase by one degree up to eight times.

To hit a 93°C group temperature as seen on the display I ended up setting the offset to -2°C.

Comparing the 15 Amp and 20 Amp Models

First of all there aren't really two different models of the VII, rather slight modifications of the same machine to allow for 15 amp and 20 amp usage. This boils down to the 20 amp version permitting both heating elements to activate at the same time versus alternating with the group boiler having priority, plus different plug configurations as was mentioned earlier. Independent of the configuration, you can explicitly turn off the steam boiler by pressing and holding the BOILER button for three seconds. This setting will return to its default of active after the unit has been powered off.

The 20 amp version's economy mode produces the exact same behavior as that which is hard-wired into the 15 amp version. I tried the economy mode for a few days to see if I noticed a significant difference. Most notable was the steam boiler startup time was prolonged by five minutes from 15 minutes to slightly over 20 minutes since it now waited for the group to reach its initial temperature. You may note a difference as well if you prepare a large Americano followed by a cappuccino since the steam boiler will have an additional thirty or forty seconds added to its normal recovery time. My impression is that the difference won't hold much sway with the majority of owners. 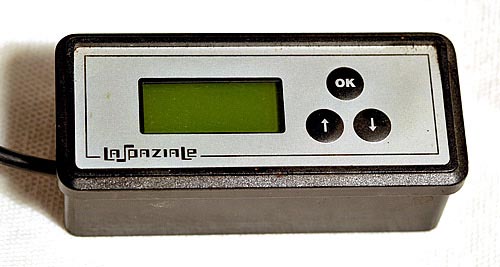 The VII is designed with 24/7 operation in mind. It's plumbed in and has independent control for each boiler. You can turn off the large steam boiler to save energy and avoid heating your kitchen, which is especially noticeable in the summertime. The VII also has an optional seven day programmable timer. I had this on my old VII and it wasn't installed on the new model I am testing. Boy do I miss it. The timer is a great compromise between leaving the machine on all the time: easy but a bit wasteful electricity wise or remembering to turn it on 40 minutes or so before you are going to use it: requires a better brain than I have but is a greener way to go. The timer is relatively easy to setup (manual in hand) and allows for turning on and off the machine up to three times a day for any of the seven days in a week. For me the seven day feature is moot since I get up every day at the same time anyways. For the later risers on the weekends this is a nice feature to have.

The timer comes with a backup battery so power outages shouldn't impact your settings. The timer is attached to a small cable that plugs into the control board of the machine. It would have been nice to have the timer integrated with the front panel some how; I keep my timer hidden behind the machine since I don't use that clock and I don't change the programming very often (read: never).