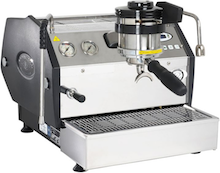 La Marzocco GS/3 MP (manual paddle)
Back in 2005, Bill Crossland of La Marzocco USA designed a new iteration of the one-group GS line by adding modern features like electronic temperature control and a heat exchanger to preheat incoming brew water; the new model is called the La Marzocco GS/3. The GS/3 is available in two models, the AV (auto volumetric) and MP (manual paddle). The AV model has been reviewed on this site two times, first as a prototype by Chris Tacy in 2005 and again by Dan Kehn in 2006. In the years following these reviews, La Marzocco has refined the GS/3 based on service experience and customer feedback. Given these cumulative improvements, we decided it was time to revisit the GS/3, specifically the paddle model.

Although the Marzocco GS/3 MP is a fully commercial espresso machine with enough capacity to cater a small wedding, it's nicely sized for the home. The MP model sports a paddle that enables the barista to easily control the length of the preinfusion. Because the pump is controlled manually, the barista must also monitor the extraction and decide when to stop it. In contrast, the AV model's preinfusion time is programmed and the AV's bank of four push buttons can be programmed for various shot volumes (single, double, lungo, etc.).

Collectively the grouphead, piping, and boiler are referred to as a "group". The portafilter locks into the grouphead; both must be maintained near the desired brew temperature. Some espresso machines have active heaters in the grouphead itself (e.g., Bezzera Strega), some have two legs of tubing that create a thermosyphon to circulate heated water between the boiler and grouphead (e.g., Quickmill Anita), some have the grouphead attached to the boiler so heat is transmitted from one to the other via conduction (e.g., Rancilio Silvia). The La Marzocco relies on a saturated group design to minimize the difference between the boiler temperature and the grouphead temperature, which lends itself to more stable, predictable temperatures. This preamble leads us to the explanation of the origin of the GS/3's name. As noted on La Marzocco's website, GS, in Italian, means "gruppo saturo" or saturated group. Thanks to this design, it's a lot easier for the electronic temperature controller (PID) to respond to temperature changes measured at the boiler since its reading lags only slightly behind the actual brew temperature delivered at the grouphead.

As noted in the introduction, the La Marzocco GS/3 is available in two models, the AV and MP. The AV uses programmable 1-shot, 2-shot, or continuous pour buttons to actuate the brew cycle; preinfusion is provided by pressure from the steam boiler. The barista can set the duration of the preinfusion cycle before the full pump pressure begins and also the total shot volume. The MP, like the one in this review, uses a paddle to actuate and terminate the brew cycle. The MP's preinfusion is provided by line pressure if plumbed in or the steam boiler pressure if running from the reservoir, however the barista controls how long the preinfusion phase lasts by moving the paddle through three positions: off (full right), preinfusion (midway), and brew (full left). 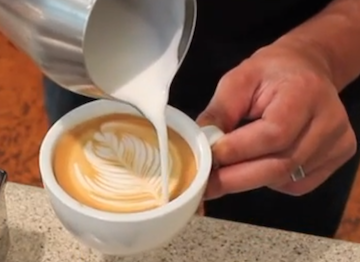 Lem Butler demonstrates latte art
If the GS/3 MP is plumbed in, preinfusion pressure is provided by the inlet source, either mains pressure or a bottle pump like the Shurflo Flojet. Once the paddle passes the midway point, the pump engages and the brew pressure quickly rises to the pump's bypass setpoint (e.g., 9 bar). In my experience, up to 6 seconds of preinfusion noticeably decreases the likelihood of channeling. If the GS/3 MP isn't plumbed in, preinfusion pressure is provided by the steam boiler. That's sufficient pressure to wet the puck, but I noticed the forgiveness factor suffered compared to when the MP was plumbed in and supplied with 3 bars of preinfusion pressure. As a matter of convenience, the reservoir located beneath the machine is welcome, but to fully realize the GS/3 MP's espresso potential, I would want it plumbed in.

Thanks to the GS/3's impressive brew temperature reproducibility, it's easy to explore how a coffee's taste profile changes by temperature bracketing. My favorite temperature brackets are the three settings 198°F (low), 200°F (medium), and 201.5°F (medium-high), though some who don't like high acidity may wish to shift this range to include +202°F. This strategy can yield interesting results, especially for single origin espressos, which are often more temperature sensitive than commercial roaster espresso blends.

For example, for Intelligentsia Coffee's Piata Bahia Brazil single origin espresso, the chocolate notes sharpened with the increase in temperature; the higher temperature also prompted an interesting shift in the aftertaste. I mentioned this effect at a get-together at Counter Culture Coffee and asked attendees how they used temperature to fine tune their espresso. Several attendees said they treat temperature as a means to control acidity levels. I agree that higher temperatures do reduce acidity, but I also find that in addition to a drop in acidity with an increase in temperature, some coffees improve in complexity. It only takes a few key presses to change the GS/3's brew temperature and a few minutes for the group to restabilize, which encourages this sort of experimentation.

Chris Tacy's review of the GS/3 in 2005 prototype recognized that some testers weren't happy with the stock wand/tip and early owner reports from the first year or two supported these critics, but these issues have clearly been addressed in today's model. Plainly stated, the GS/3 stock configuration is excellent and deserves a five-star rating. The so-called optional "burn me wand" is slightly faster, which may be appreciated by those who regularly steam very large lattes in the same spirit as a Starbucks Venti. But for those who don't serve Big Gulp lattes, the stock configuration is unbeatable.