Toonces and our morning routine

Want to talk espresso but not sure which forum? If so, this is the right one.
← Back to Knockbox • 6 posts

Familiarity is comforting. I look forward to renewing that sense of "groundedness" each morning, in both the drinking and preparation ritual of the day's cuppa. With the kitchen abuzz with kids, I'll admit the routine is far less relaxing than it once was. One constant over the years in front of the espresso machine has been my furry companion: 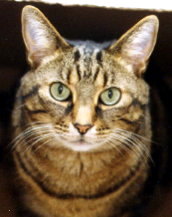 Prior to joining our family, Toones was the neighborhood cat, hanging out alternatively at one house or another. We were new to the block and assumed he belonged to someone since he was wearing a lavendar collar. At the time we were definitely not "cat people," which I believe he sensed, so he didn't linger in our yard.

Weeks passed by. We noticed that he was looking a little leaner. The mystery of who was his owner continued. He started coming to our back door, obviously hungry.

I warned my wife: "If you feed him, you'll never get rid of him." Predictably, he slowly worked his way into her graces. It began with a bowl of food on the deck. As winter approached, she offered him a soft blanket in the garage. I chided that it wouldn't be long before he was sleeping in our bed.

"No way that cat is living in our house," she said. "He's staying in the garage."

A few weeks later we posted "lost cat" signs around the neighborhood and called the local animal control board. Nobody claimed him. It was a formality. Afterall, he had already claimed us. The next question was what to name him (we called him "the cat" up to that point). He reminded us of Toonces the Driving Cat: 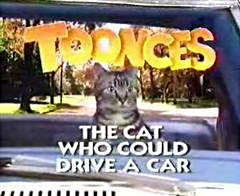 This series of Saturday Night Live skits had the same punchline: A couple mulls over letting their cat drive the car because he seems to know how ("...just not very well"). Invariably Toonces starts out fine and then: "TOONCES, LOOK OUT!" The next scene is a car going off a cliff (one is an end-over-end tumble, the other a roof-crushing splat). My favorite episode is the Tooncinator featuring Linda Hamilton and a cyborg Toonces. (Apparently a lot of people made the same name connection. Our veterinarian mentioned it was a very popular name for calicos.)

Toonces did make it out of the garage, into the house, and yes, wedged himself between us on cold winter nights. Where we went, Toonces went. He happily travelled in cars, but preferred the back window ledge, not the driver's seat.

He converted me to a "cat" person, or at least a "cool cat" person. They won't deign to offer slavishly devoted affections like a dog -- to a cat, you're their roommate at best. Toonces, like many cats, thrives on familiar surroundings and routine. Natually he gravitated towards my station before the espresso machine, either watching curiously, or walking by to rub himself against my legs. I thought of this as his way of saying "good morning."

A couple weeks ago Toonces didn't meet me in the kitchen. I didn't think much of it at the time; he was an indoor-outdoor cat and he missed our morning rendez-vous if a flitting bird or romping squirrel offered more interest. Later our youngest son came upstairs telling us that Toonces was asleep and wouldn't wake up.

I miss my morning espresso buddy. Goodbye Toonces, you were one cool cat.

ah, Dan, that's too bad. I am house sitting for someone this summer; she has 2 cats, and they both sleep in the full-size bed. Holly sleeps on the pillow i don't sleep on, and Whisker sleeps darn near anywhere. Wherever he sleeps, he won't move. you can kick him (gently) and he won't move. funny guy.

I haven't had a cat die on me. we had a cat when I was younger that had to be put to sleep because she got so senile that she relieved herself anywhere in the house, but other than that...

It's great that you found such a wonderful cat, though, or rather, that he found you. great name for him, too.
Top

Sponsored by Versalab - maker and supplier of finest espresso equipment

I'm sad that he passed but at least he found a good home. I hate seeing strays because we want to take them in. Matter of fact, our youngest came into our lives that way. She was rescued by a friend on a busy 6 laner and has not left since. The older kitty didn't like her and even now, only tolerates her. I love my babies.
Top 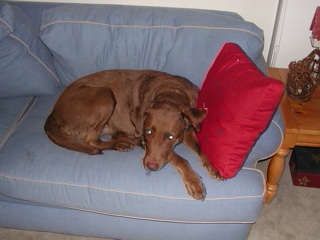 I was browsing around the site and came across this old post. Losing a pet is always tough. The picture above was our family pet. Ironically her name was Java! Funny thing is we named her for her coffee color years before I moved to Italy and got interested in coffee and espresso. She passed away several years ago but she is still sorely missed by my whole family.
Top

shadowfax wrote:I haven't had a cat die on me. we had a cat when I was younger that had to be put to sleep because she got so senile that she relieved herself anywhere in the house, but other than that...

Man, it's been ages since this thread, but I thought it might be of some interest. One of the cats I was caring for during the house-sitting actually did die--sort of. She had to be put to sleep because she suffered a kidney failure. The owner took the call from the vet while on her vacation and had to make the call (she couldn't afford the surgery remotely). It was pretty sad to experience Holly's death.

She was always allowed to go outside by herself for about 30 minutes each evening--she came back in herself. One evening she didn't come back, and I looked all over for her for days. Finally several days later I found her hiding under a trailer in the neighbors' yard, and brought her back home. I didn't let her out after that. She stopped eating, and then started drinking a lot, but never going to the bathroom, towards the end. That was how the vet identified her symptoms when I called, and one of the neighbors took her to the vet for me...

I completely forgot that I posted on this thread! Holly's death must have happened within a couple of weeks of this post. That's quite ironic.
Nicholas Lundgaard
Top

You provided that cat with a friend, not an owner. Good on ya, Dan, and I'm sorry for your loss.
Espresso Sniper
One Shot, One Kill