I've put this post in the Knockbox forum, since it's not an espresso grinder.

I became fascinated with large burr, regular coffee grinders after my cupping session, two years ago, at Terroir. They use a large Ditting grinder with 125mm burrs, which produces exceptional clarity for brewed coffee. The reason may be that the grinder produces almost no fines, a fact that becomes apparent if you attempt to use it for espresso. I didn't want to spend $2000 on that grinder, so I decided to take a flier on the Country Living Grain Mill, which costs $400, and had a good aftermarket on Ebay in case it didn't work out.

As you can see:

it even makes the titan grinder burrs look like puny little whirly blades.


The burrs fit into a cast iron manual grinder which can crank out 15 grams of coffee for french Press in about 25 seconds. Unlike most manual grinders, the huge flywheel takes almost no effort to turn. 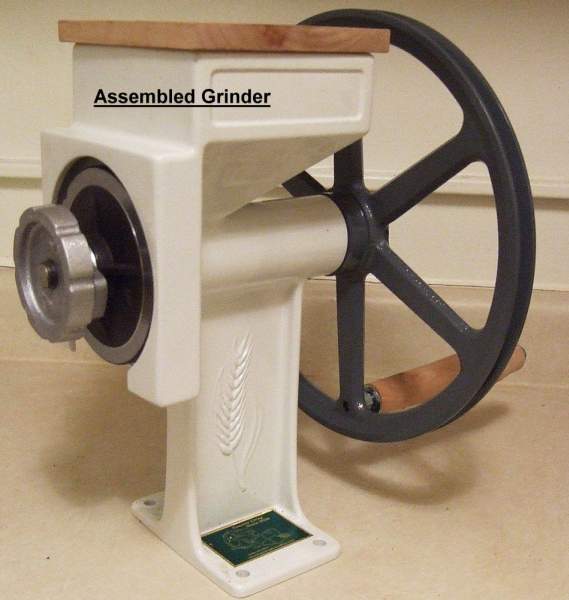 The burr is worth a closer look: 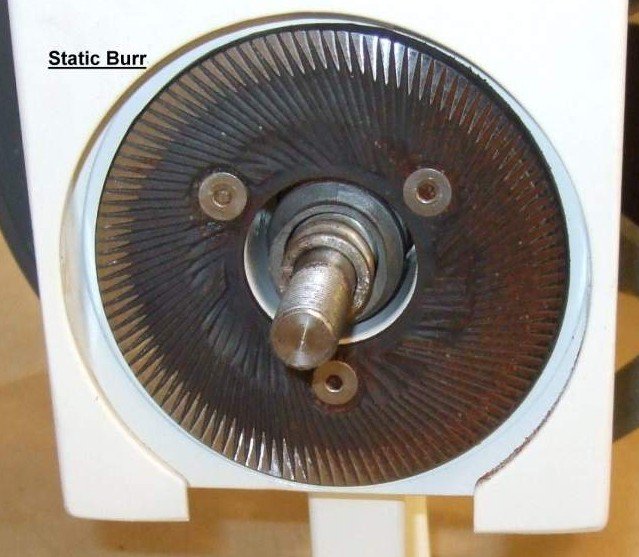 compared to the static burr on the M3 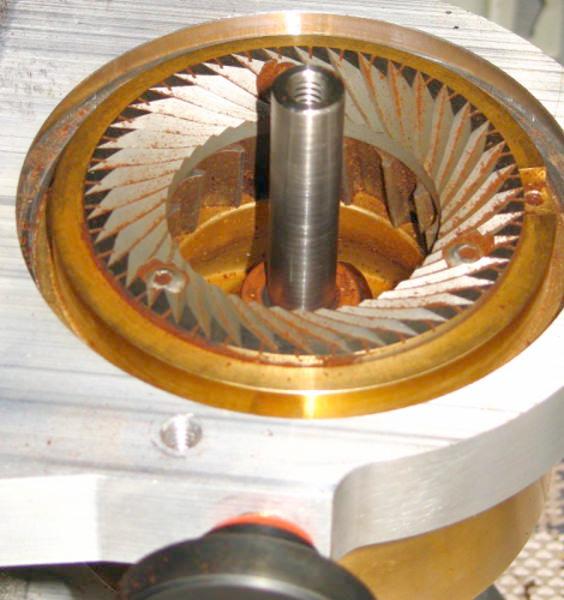 The grinder layout is simple, like all industrial grinders, with a horizontal axle and vertical burrs: 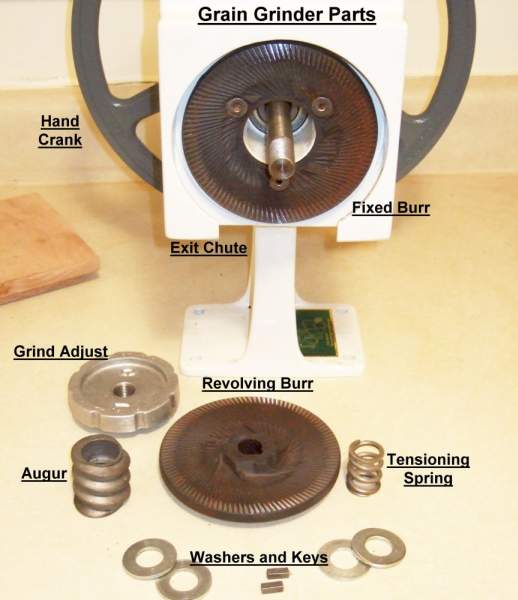 The pictured augur forces the coffee beans into the coarse grinding section. The rotating burr is fixed to the drive shaft with a key. It is spring loaded, and tightening the grind with the adjustment nut compresses the spring. The system is efficient, but not entirely free of waste. For brewing coffee, roughly half a gram of coffee remains as broken bits in the augur or as ground coffee stuck in the burrs. As one sets the grind finer, grind speed slows down and the amount of waste rises, since it becomes more difficult to force the beans through the burrs. The grind setting nut can loosen during grinding, especially for finer grinds, and it's a good idea to lock it in place with a 5/8th inch wing nut.

So how does it perform? I've compared it with my other grinders for brewed coffees. It is not always the best, but it is always close to the best and much more consistently so than my other grinders. The reason is simple to find, but hard to understand. On my other grinders, the best French press coffee required grind adjustments - some coffees did better ground a bit finer, others a bit coarser. The grain mill on the other hand was pretty much consistent at any grind level that felt like a French press grind.

The titan espresso grinders were a lot less finicky than the smaller espresso grinders, so maybe this effect for brewing is similar. Since one cannot fine tune the grind when cupping, the grain grinder is the best choice, and the one I've been using for the past six months.

On espresso it is not quite as hopeless as the big Ditting, but you still have ot wait 20 seconds before seeing the first drop on a non gushing shot. The grinder does produces some fines, since the rotating burr can wobble a bit due to its simple keyed mount of the grind shaft; but it is not enough for reasonable espresso use.

I think this grinder is worth checking out for people who do a lot of cupping, especially since it is easily motorized. But sadly, It is not the mythical, ueber-titan hand powered espresso grinder.
Jim Schulman
Top

another_jim wrote:I think this grinder is worth checking out for people who do a lot of cupping, especially since it is easily motorized. But sadly, It is not the mythical, ueber-titan hand powered espresso grinder.

Cool. Did you get the version with the Titanium Nitride-coated burrs?

But seriously, do you notice any variation in fineness depending on rotation speed? I notice a rather pronounced effect (pulling espresso shots, of course) with my variable speed Robur.
-AndyS
VST refractometer/filter basket beta tester, no financial interest in the company
Top

Hi Andy, I haven't consciously varied the speed, I just grind away at roughly 2 RPM.

I know from single dosing that when relatively few beans are in the burrs at any one time, as happens when single dosing, one has to grind with the burrs set closer. I don't know if this actually changes the grind to finer coarse particles and fewer fines, or whether the lack of beans jostling against each other means the burrs have to work harder to get the same grind.

I guess as the grind speed rises, there are fewer beans going through the grinder, and therefore one needs to set the burrs closer. If it turns out to work the other way around, I'll be stumped to explain it.
Jim Schulman
Top

Yes, that's the way it works for me.
-AndyS
VST refractometer/filter basket beta tester, no financial interest in the company
Top

Oops, RPS: 15 grams of last year's Esmeralda, 60 to 65 turns (the beans petered out in the last five turns), 25 seconds. So this hand grinder operates at roughly 150 rpm. The feed rate is really inefficient compared to the commercial conicals which can grind the same amount in 5 seconds going at only 300 rpm. On the other hand, I doubt they would crank as easily.
Jim Schulman
Top

Jim, do you suppose the feed inefficiency of this mill is attributable in part to the augur? It seems like it might be tuned for feeding smaller objects than coffee beans (hmm, grain?) into the grinding chamber, and thus suffer some feed efficiency when used for coffee. Have you noticed any kind of feed resistance, or am I way off?
Nicholas Lundgaard
Top

The augur is an extra for grinding coffee or dried beans. For smaller seeds, the helical shape of the tensioning spring acts as the feed.

Flat burr grinders are inherently inefficient compared to conicals, since they feed from a small central hole towards a wide outer diameter. The amount ground per rotation is determined by the inner diameter, not the outer one. This grinder has a small inner diameter, and therefore grinds slowly. On the upside, the grind path is huge, so the grinding action is ultra gentle.

It occurs to me that the reason the DRM/Versalab/Max grinders use a conical burr rather than an augur to feed the flat burr is so they can increase the size of the inner diameter and grind amount per rotation capacity. It's a good solution.
Jim Schulman
Top

My question is probably stupid, but... i will ask anyway.
Can this grinder be used for bright centrals or kenyan roasted city or city+ ?
If you put a 14 gram dose in and change the grind setting at every gram, would it produce a particle distribution that is suitable for espresso extraction?
if not, what about grinding some in the espresso grinder and some in this one and blend them to produce a shot.
if not, can it be used to increase the percentage of a bright coffee in a blend?

I guess i am just too frustrated that i can't use the coffees i love the most as SO espresso or in high percentage in a blend.
Top

I haven't been able to get any sort of consistent espresso extraction from this grinder. The fines are just too low. It might work if you use high doses, but this is exactly what to avoid when doing light roasted, acidic SOs.

My holy grail is to be able to make espresso of any coffee and get the same balance as in the cup. I'm getting close for most coffees, although Kenyas remain a challenge, while Catura, Catuai, and Pacamara washed Centrals mostly refuse to cooperate at all. For me, the key has been twofold:
-- use very low doses for bright high grown coffees, 12 to 13 gram doubles
-- get a commercial conical. Low doses of high grown coffees are a very tough challenge for any grinder, and these are the only ones I know that deliver the bulletproof consistency you'll need to get consistent shots. I'm sorry to say this, since these grinders are very expensive. It might be that grinding twice, once to French Press coarseness, and then to espresso, will get consistency from smaller grinders, but this remains to be proven.
Jim Schulman
Top

another_jim wrote:It might be that grinding twice, once to French Press coarseness, and then to espresso, will get consistency from smaller grinders, but this remains to be proven.

From different things I have read I thought this was generally not advised, that it could somehow foul the burrs!? Though I must admit I cannot see how grinding a rough press grind could be anymore taxing on the burrs than whole beans.

I really don't want to ask this question.

Assuming ill effects are only assumed

and this could not damage your grinder, would the press grind need to be from the same quality of grinder as the espresso grind. In other words could I grind with my currently unused Infinity to press and then into my NS for espresso and achieve a higher quality and consistency of grind? I have seen this type of question before and discarded it as sort of a noisy item generally coming from someone trying to simulate the effects of a hybrid after upgrading to a smaller flat burr grinder from a lower end multipurpose conical. I discarded it because I read somewhere about re-grinding that basically said it leads to a more irregular grind and higher fines count. I do not believe I have the ability or equipment to test this out so I took it as "makes sense" and moved on. Your statement above has goaded me into asking this question that I really wanted to discard.

Should this be tested or should I leave it alone?

Insert catchy phrase of choice here
Top
← Back •
By accessing this site, you agree to the site's terms of service. If you need help with the site, please contact us.