Want to talk espresso but not sure which forum? If so, this is the right one.
← Back to Knockbox

Note: If you want to browse quickly through the top ten entries, see the Synopsis of the Home-Barista.com SwagFest 2005 Contest Entries.

Our twelve judges have submitted their scores. Bob and I are double and triple checking the results. Tonight I'll post the first round scores and tomorrow the winners. In the meantime, I would like to thank our judges: (And me too).
Dan Kehn
Top

Explanation: Finalists were selected by six judges (me, Abe, Bob, Chris, Stephen, Steve). As described in the contest rules, each judge could award up to 600 points per entry; a perfect score would then be 3600 points. The percentage show in parentheses is the "early bird" bonus. These bonus points increase the entrant's first round score and improve their chance of advancing, but they do not carry forward into the final round.
Dan Kehn
Top

Note: If you want to browse quickly through the top ten entries, see the Synopsis of the Home-Barista.com SwagFest 2005 Contest Entries.

This is it! The first Home-Barista.com SwagFest concludes tonight. We're happy to have such a great set of prizes to offer, thanks to our generous sponsors: A small commercial message: Most of Team HB have personally done business with each of these companies. To help make SwagFest a yearly event, please remember our sponsors next time you're shopping for your espresso equipment needs! And it wouldn't hurt to mention you support HB. It's music to their ears, and more importantly, helps loosen their promotion budget next time HB goes begging for prizes!

So without further ado, the envelopes please!
Dan Kehn
Top

Storage of Roasted Beans to Maximize Flavor
by Bob Barraza

Putting it all together
by Charlie Wicker 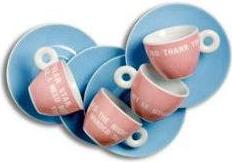 How to pull a beautiful "naked" triple shot
By Jon Rosenthal

An Aficionado's Guide to Espresso Blending
By Mike Walsh

Below are the final round scores based on judges' ranking from 1-5: Explanation: Twelve judges provided a numeric score from 0-6 for each entry and a ranking. The numeric scoring was principally for consistency checking a given judge's scoring (e.g., a judge scoring well outside the majority would have to defend their results); the ranking is what determines the winners. Ranking is used instead of the numeric score to avoid unfairly weighting more heavily those judges' scores that are higher.

For example, consider two judges submitting scores with the exact same ranking, but differing by one-half point for each contestant (e.g., judge A submits scores 2.0, 3.0, 3.25 and judge B submits 2.5, 3.5, 3.75 for contestants X, Y, Z). Both judges ranked contestants X, Y, Z the same, but if you simply added all judges' scores, the opinion of judge B will weigh more heavily in the outcome simply because he/she scored each entry higher. Summing the ranking (1, 2, 3 in this case) assures each judge's score is weighted the same.

Back to this contest's results. Since ranking is used, the lowest score is the winner. Twelve judges ranking the same entry as 1st would award it a score of 12. If everyone agreed on the 5th entry, its score would be 60. Realistically judges differ slightly on their opinions, so the 1st and 5th entry rarely are scored to the extremes so nicely.

Fortunately the SwagFest judges were in wide agreement about the grand prize winner. Seven of the twelve picked Mike's entry as #1. The 2nd and 3rd entries were as close as can be with only ONE point separating them. With such a razor-thin margin, we triple-checked all scores. As an extra step after the tabulations were complete, judges re-certified their rankings to assure no transcription errors occurred before declaring the results publicly.

PS: David (Cannonfodder) had three entries in the final round. Only his highest scoring entry is shown in the ranking.
Dan Kehn
Top
← Back
By accessing this site, you agree to the site's terms of service. If you need help with the site, please contact us .