Monday's final included three baristas from Intelligentsia Coffee Roasters in what was reported to be an extremely close race for the Speciality Coffee Association of America's US Barista competition in Charlotte. Meriting the highest score awarded a USBC competitor, Matt Riddle of Intelligentsia takes the title, $1000, a new La Marzocco GS3, and even $7500 in travel money in his next step towards the world competition in Bern. Congratulations Matt!

I'll post the full report over the next few days. In the meantime, to whet your appetite, enjoy these photos from Sean Lennon:
(*) Included in the finals due to an earlier scoring error. 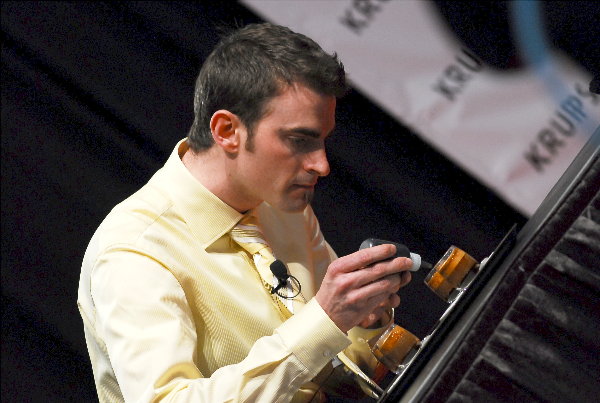 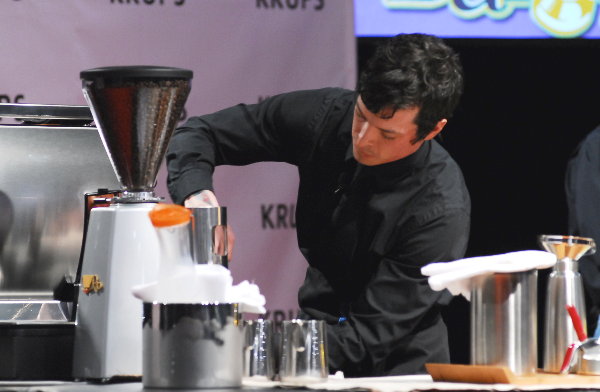 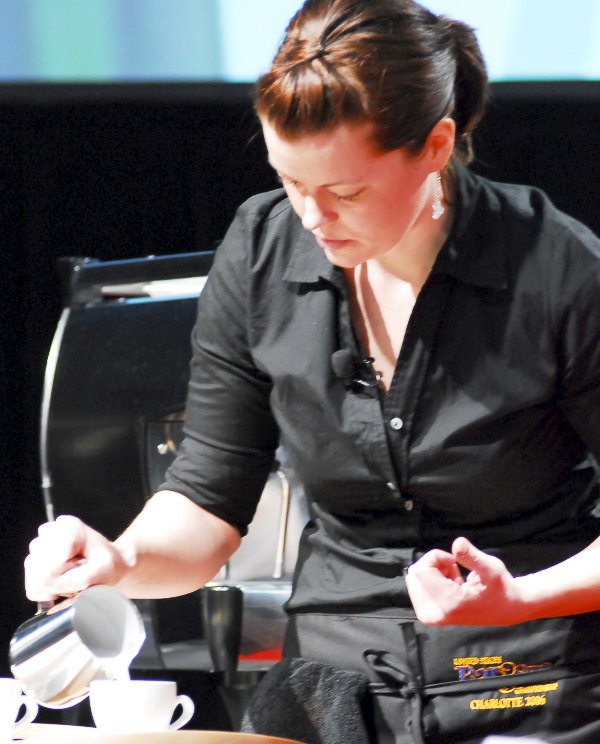 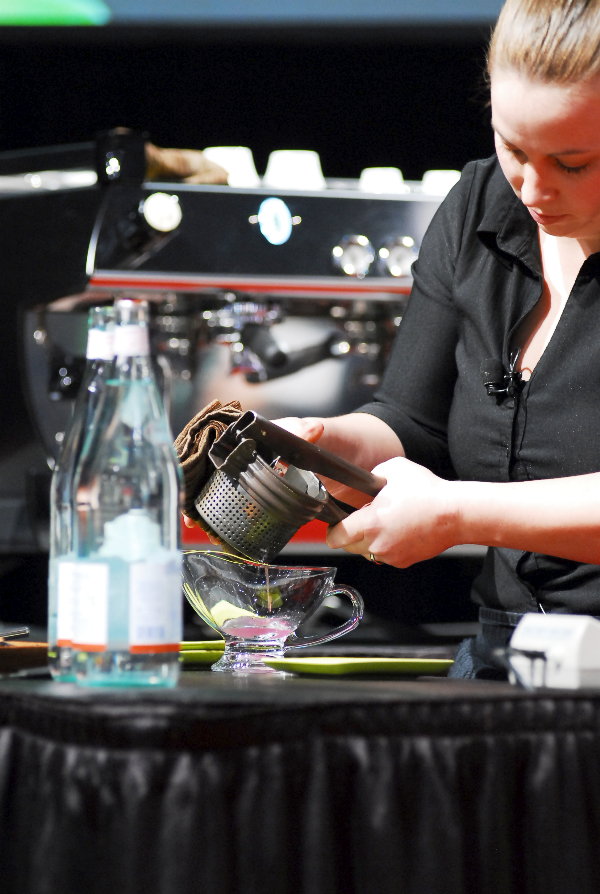 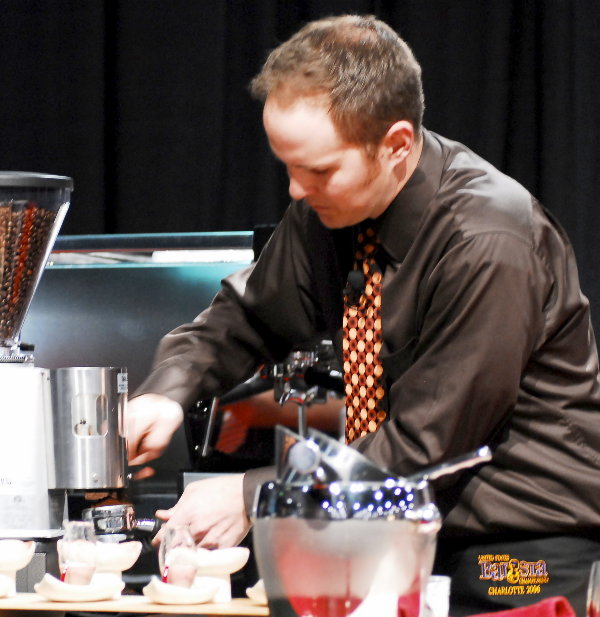 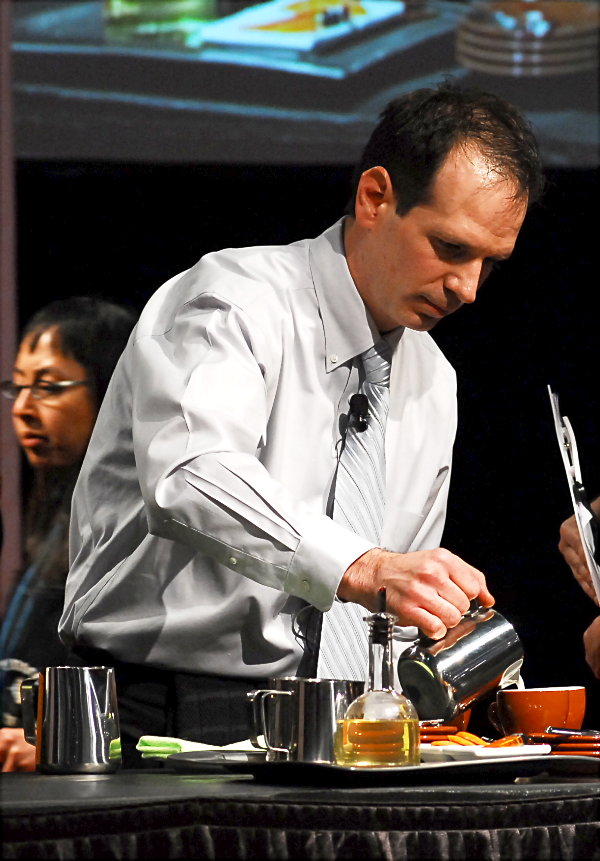 WAY TO GO INTELLY. AWESOME JOB!
I feel like one of Dave Letterman's "Brush with Greatness" guests now since Intelly is the only place I buy coffee in a shop, and it's 3 hours away.
I've seen their team in action and it's amazing to watch them work.


Seriously, a heartfelt congratulations to all of the competitors, though.
ThaRiddla RULES!

I just have to say Steve Fritzen is my hero. It is great to see an owner/barista and father of a young child get into the finals.
Top

I gotta say...there's more to the Ryan Denhard thing, more than just a scoring error, it's bad for barista competition. I'm just glad Matt pulled it out...he is a credit to the craft, as were the other legitimate finalists.
Top

Matt is a web and graphics designer by trade; his workday is a world of visual composition and colors. This attention to colors and their relationships were evident in small details, beginning with his pale yellow dress shirt, dark pants, and diagonally stripped tie that contrasted the red trim among the white service ware, red-rimmed white tablecloth and red napkins. Even the squeeze bottles had small red tips. Matt carefully balanced accents amid unbroken shades of white to create an elegant, crisp, and purposeful space for the judges to appreciate their three courses of espresso and espresso-based drinks.

As a nearby reference to the official clock, Matt placed a timer atop the espresso machine, then approached the judges' table to introduce himself and prepare the table. The menu he placed before them listed the names and order of the drink presentation. Matt's signature drink was named "Star" in recognition of the star anise that would be infused in the steamed milk. He served espressos composed of Central and South Americans to present a balanced sweetness, full body, and chocolate finish. 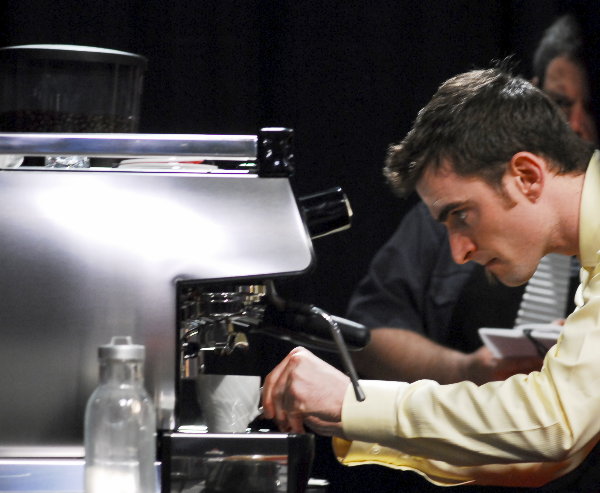 Matt chose songs from the band, Kings of Convenience, explaining that the calm guitar ballads put him in a good mood for his daily responsibilties at Intelligentsia Coffee Roasters. His cappuccinos were served in white delicate tulip-shaped cups with upturned handles. He explained the drinks were prepared with non-homogenized milk and a traditional style pour. Like several other finalists, Matt employed two pitchers while pouring, the first containing the originally steamed milk. As necessary, he would deftly transfer liquid or foam to produce four cappuccinos that were evenly textured and had the proper depth of foam. The camera zoomed in on the first pour as the luscious looking foam brimmed to form a crown. It may be wonderful looking, but it's probably hard to carry without spilling! Serving to the judges, he reminded them how the nice velvety sweetness of the milk compliments his espresso, then turned to prepare his signature drinks. 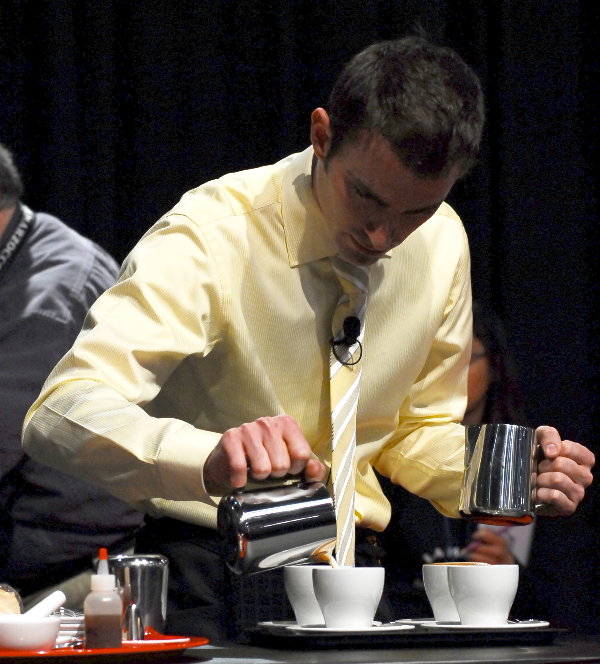 As Matt explained at the beginning of his presentation, the Star signature drink derives its name from the infusion of star anise. He placed the spice inside a paper filter and folded it over the side of the steam pitcher. The steaming rounds the distribution of the anise's flavor infusion in the milk. In addition to the spices, Matt used molasses and figs reduced to syrup. The result is a harmony of spiciness from star anise and complex sweetness from the two syrups.

He began by filling a short shot glass with a bottom glaze of molasses. He mottled some star anise with mortar and pestle to get the oils moving. The dark layering was topped with a dollop of foam in the center, to which he drew a delicate five-point star using a squeeze bottle of molasses. He instructed the judges to stir thoroughly, and if they desired, drink it all to appreciate the change in flavors. 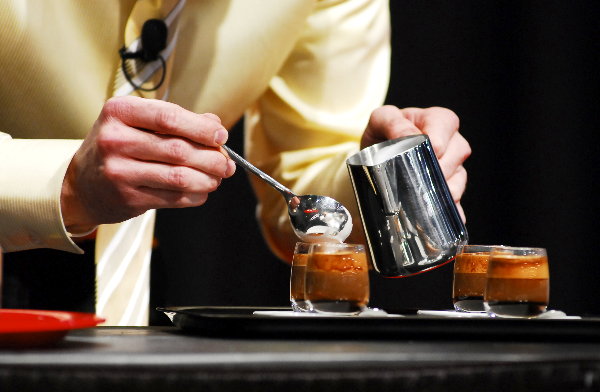 Technical notes: Like the other baristas from Intelligentsia, Matt doesn't leave his hands idle after the pour begins; he immediately grabbed a small brush to clean up around the grinder after pressing the brew button. Distribution is a brief rounded heaping followed by tamping with fingers overlapping the basket edge to check level. 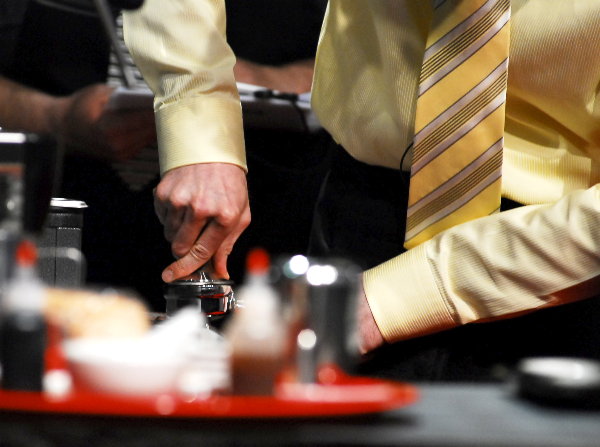 The technical and sensory judges are instructed to show no reactions -- positive or negative -- during their evaluation. Sensory judge Andrew Barnett ponders the taste and tactile balance of Matt's espresso. Technical judges Bronwen Serna and Barry Jarrett watch every movement and note any error. 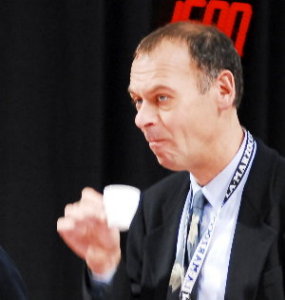 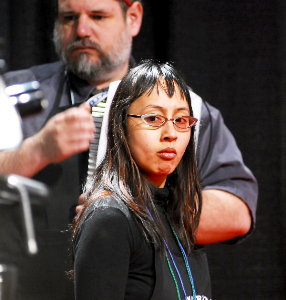 (*) All photos by Sean Lennon. Please do not copy or redistribute.
Dan Kehn
Top

you shame me, dan, with the in-depth, no-nonsense reportage. still, i've got video!


Toss that vid up on video.google when you get a chance. I had a bunch of small clips I freakin deleted on accident. (DOOOH)

Great photos; makes me feel like I was really there!

we have to ask: we're you judging at the MARBC back in February? One of the judges in DC actually nicked Belle Battista some points for wearing an outfit that didn't match her tablecloth. That's nowhere to be found in the judges instructions... and with all the attention you paid to Matt's outfit, just wondering, y'know?

Great photos though. Much better than what we took... we need a new camera.
Top
← Back •
By accessing this site, you agree to the site's terms of service. If you need help with the site, please contact us .