This summary of Olympia Express history was written to accompany the review of the Olympia Express Cremina. This history is based on information provided by the current owner of the company, Thomas Schatti. It is supplemented by online searches and a review of prior Home-Barista posts. I welcome contributions that will help me fill in the gaps, especially if you can point me toward original references. For instance I would love to find a photo of Luigi Bresaolo, the company founder.

Olimpia Express (Olympia by 1967) was founded in 1928 by Luigi Bresaolo, in Chiasso, located in the Swiss Canton of Ticino. According to online legend that may trace to an original publicity text, Bresaolo became dissatisfied with the quality of coffee machines in his wife's café. He started his own company and for many years produced commercial machines and cafetieres (moka makers) for home use. He was a perfectionist and would modify a machine until he could improve it no further. The current Olympia Express site has a page with photos of these historic machines. Those include urn-like steam espresso machines that predated the 1938 invention of the café crema brew method, where a piston forces water below the boiling point through the coffee, greatly improving extraction flavor and mouthfeel. 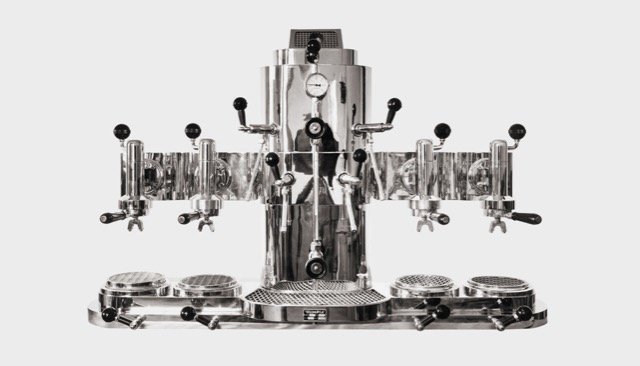 In its middle years the company produced commercial levers and pump-driven machines. Restoration threads show that these were all beautifully crafted. In 1968, the management torch was passed to Luigi Bresaolo, Jr., and at some point the company moved to Morbio, Switzerland. Later years were marked by several ownership changes. In 1992 the company was closed. It was acquired by Markus Fasnacht, who ran the workshop in Mendriso, Switzerland. Felix Wey became a partner in the late 1990s. He and Fasnacht redesigned the Cremina and Maximatic in their near-current versions. There's a beautifully documented account of the company in that phase in the 2005 thread by H-B member Danno, Visit to the Olympia Factory. Fasnacht sold his shares to Heinrich Linz in 2007. As principal but still with Felix Wey's involvement, Heinrich Linz established Olympia Express, SA in 2008. In the same year Christian Sagehorn joined the company, and manufacture of the Cremina, Maximatic and Moca were restarted. In 2010 Schatti, AG acquired the company, with Thomas Schatti now serving as chief executive. In 2011 the company moved its manufacturing to Glarus, Switzerland. 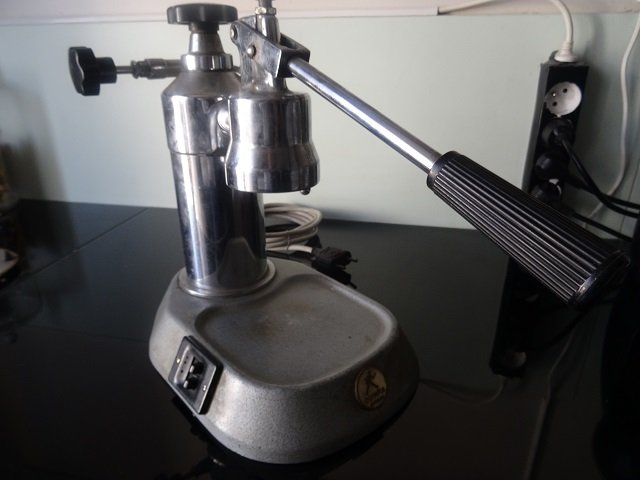 The first Cremina manual lever home models were introduced in 1961. These show a common ancestry with the La Pavoni Europiccola, which was introduced by the workshop that created the Nea Lux, Caferina, Co-Fer, D.P. and Wunder. The extremely rare Nea Lux was first produced in 1958 and was patented in 1959 by Diamanti Piero, but no one knows whether he was the inventor. The earliest Nea Lux type machines were well made, with simple mechanical era device technology. They lacked later innovations like sightglasses, drip trays and protective thermal switches. Heating was controlled by a Massimo/Minimo switch, and the machine was powered when plugged into a wall socket. The group had a brass sleeve screwed into the outer cast brass group head. This was a very good heat sink. Temperature was also kept within brew range by constant venting of the overpressure valve. Francesco Ceccarelli's website is the best reference information for these early machines.

In the early 1960s the D.P. company, or at least its patent, was probably acquired by La Pavoni. From the very first version Olympia Express improved the manual lever machines obtained from La Pavoni. Francesco Ceccarelli believes that even the earliest Creminas were produced by La Pavoni, because they all had serial numbers, unlike the immediate predecessors from D.P. (personal communication, 11/29/15). It seems the Olympia Express machines were taken right off the La Pavoni production line because a recent Internet search reveals that the serial numbers correspond with the feature sets seen in the same version of La Pavoni machines. La Pavoni successively added useful features, including a sightglass, drip tray and grate. Olympia express added its enhancements to the very first version of the Cremina, including a removable power cord so the machine was easily turned on and off, and a metal base instead of the rubber La Pavoni version.

Introducing the Cremina as We Know it Today 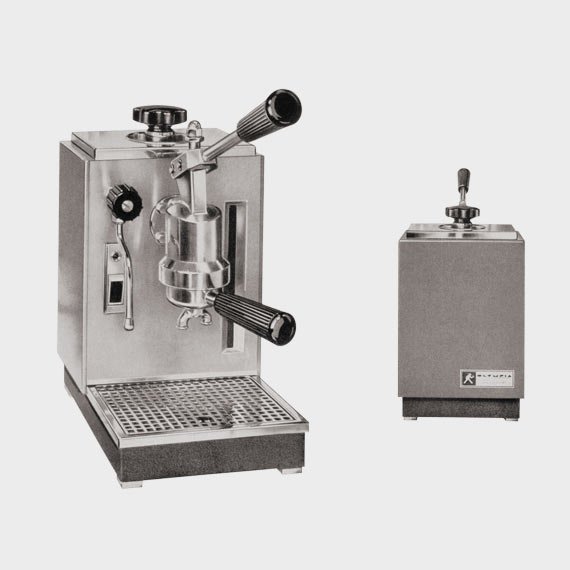 By 1967 Olympia Express brought the manufacture of the Cremina in-house. The second generation Cremina was a total redesign to the machine that we know today. An outer case now enclosed the heated boiler to reduce burn hazard. It had a much larger, removable, metal drip tray and grate, a resettable thermal safety switch and a gasketed steam valve. The steam wand was moved to the left, and the heating system was now controlled by a pressure switch that was activated whenever the machine was powered on. Added: Introduction of a higher wattage and pressurestat controlled heating system may have made the base of the first generation machines uncomfortably hot. A more thorough explanation of that is provided below. Olympia Express continued to improve design and build quality with minor exceptions (i.e., the 1991 plastic drip tray) that were almost always later reversed. The substitution of a standard, Mater pressure switch is the only exception. It was introduced by 2002, replacing a highly durable Olympia manufactured pressure switch that is prized by collectors of the older machines. This change to a standard part has an advantage. It eases access to that replacement part without altering the machine's function.

The Cremina has undergone many changes over the years, some of them cosmetic, such as changes in the logo badge to elimination of that badge in recent models. Boilers in the early Creminas were encased in asbestos insulation that was eliminated when the toxicity of inhaled asbestos fibers became known. The boiler was originally brass but is now made of stainless steel. A pressure gauge has been added as well as a heat break gasket between the group and boiler to improve its temperature stability for brewing. The build quality of the current version is unsurpassed, earning a reputation as the Rolex™ of home espresso machines. 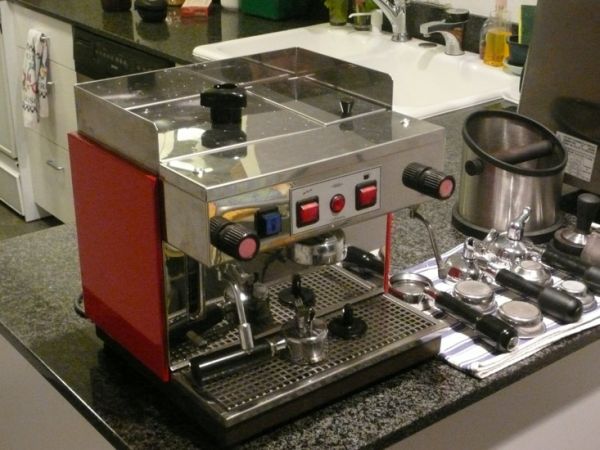 Olympia Express's entry into the home market included a line of grinders, spring lever and pump machines. Briefly they include the following models. Of these the Maximatic heat exchanger pump machine and the Moca grinder are still produced today:
A Drip Coffee Brewer?

A web search brought up U.S. Patent 3505947 filed by Luigi Bresaolo in 1970. It's a drip coffee brewer similar to what we know today but is not the first one, as pointed out by Craig aka baldheadracing. I wonder whether they made any drip brewers? 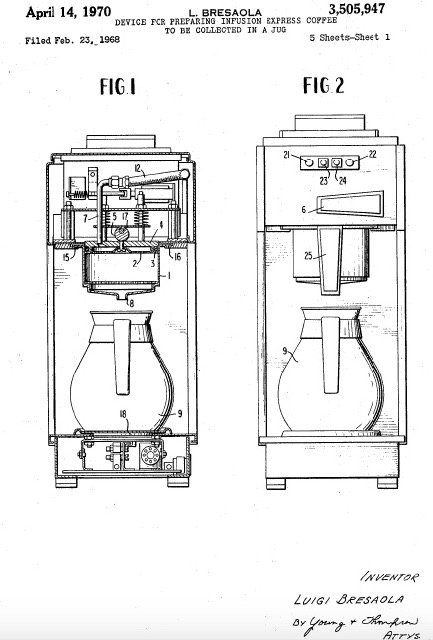 Thank you dr.gary, for such a wonderful History. ( Yes, I loved history ) Please keep us posted more

Very nice Gary...thank you for taking the time to put this forth for us!
No Espresso = Depresso
Top

Danno visited the factory a few years back:

This is my favorite piece in your collection of work. Thank you for the write up, Gary.
http://soulsidecoffee.com LMWDP #354
Top

Visit to the Olympia Factory

Thanks, Jack. That's a great thread that also includes suggestions about manual lever technique that have become standard methods to this day. I've added a link in the original post.
Gary
LMWDP#308

Yessss, it was great to read about the story I was told half a year ago in Glarus/Schwanden. It helps me remembering. This company is really a unique one. Thanks Gary. Somewhere I've linked the pictures already as Mr. Schätti introduced me the Schätti AG and the Olympia assembly.
www.naked-portafilter.com
Top

Gabor: I found your link by searching your temperature study thread for the name, Schätti. I you want to upload a few select photos here they would be welcome!
Gary
LMWDP#308