Yes, the case is back at EPNW. There may be a limited excursion to catch those who were passed by due to a miscommunication.
Dan Kehn
Top

I just went through this and noticed that no-one has held the coffeelab and espressocraft tampers by holding them only by the bulb. Luke Shilling (moreso than I) has been playing with different hand grips for these tampers and we both found that by moving our hands up the tamper piston and gripping just the bulb we have the weight of the tamp centered evenly downwards. This makes for a much better feeling when tamping because everything feels 'more right'. It results in a little less eyeballing to center and level the tamp.

It also makes it so that our fingers don't feel worn out by taking the pressure of the tamp. Luke during his coffee cart periods finds that this grip helps him reduce the wear and tear on his tamping arm. It wasn't something that was apparent to me and Luke has been doing it for ages hah. Anyway I only really sussed this out in the past day or so but the results have been fantastic.

I might also add that we are more of the 30# tamp rather than the super grunt tamp and that's what this method seems most well suited to.
Anthony Lau
Top

I just picked up a ball-handle Bumper Tamper and I love it. It's heavy and the piston is thick. It feels great in my hand - very comfortable.
Top

I did a new mod to my "Barismo Spec" tamper. 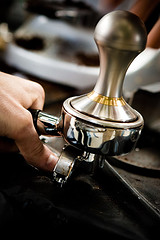 I was worried that sand-blasting the handle will take away the real nice shine of the tamper but everyone seemed to really loved the satin finish. It also provided a a much nicer grip, especially when your hand is dirty or wet.

EspressoParts folks has seen the tamper and liked it. They are going to make available the "barismo spec" tamper and have already made some brass adaptor rings. Not sure if other mods (mirrored c-flat base or the new sand-blasted handle) will be included but something is definitely in the works.

I really like this tamper. It's the EP5 from EspressoParts.com. Terry recommended it, and it really was a great choice for my tamp. I feel it has a great balance, and while it's a little lighter than most, you can tamp real well and even with it. Kudos to Terry and espressoparts.com! 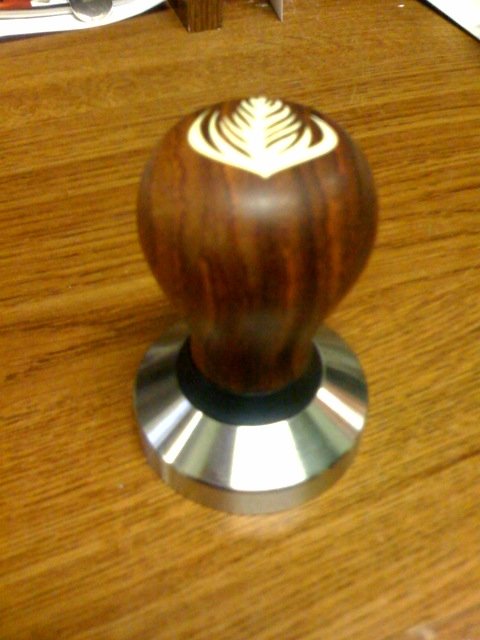 I refuse to own a tamper with better latte art than I can pour.
Dave Stephens
Top

Funny, I've just read this whole thread through. The tamper which most discourages is the tamper I prefer to use, the Reg Barber Radical Pro.
Actually, I have three of them two 58 mm a maple and a Bubinga and a 49 mm Bubinga.
Tamping is truly a personal issue.

LMWDP #255.
Top
← Back •
By accessing this site, you agree to the site's terms of service. If you need help with the site, please contact us.