RegulatorJohnson wrote:i have been using a minimalist approach lately. not as extreme as "no toucha" but it seems to work well. here is a shot of a recent shot. i have been really into these macro shots of the initial beads. it seems like the less i do the better these look. i let the coffee fall and then bump it around a bit then tamp. no re-distribution, trust gravity. 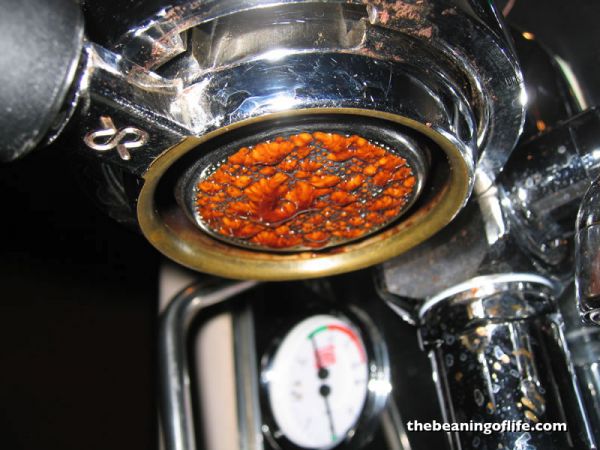 Nice even beading. They're not as attractive as a midpoint bottomless pour, but I believe the first 5 seconds of the extraction tells you much more than the next 15.

HB wrote:Nice even beading. They're not as attractive as a midpoint bottomless pour, but I believe the first 5 seconds of the extraction tells you much more than the next 15.

how do these look from the same shot: 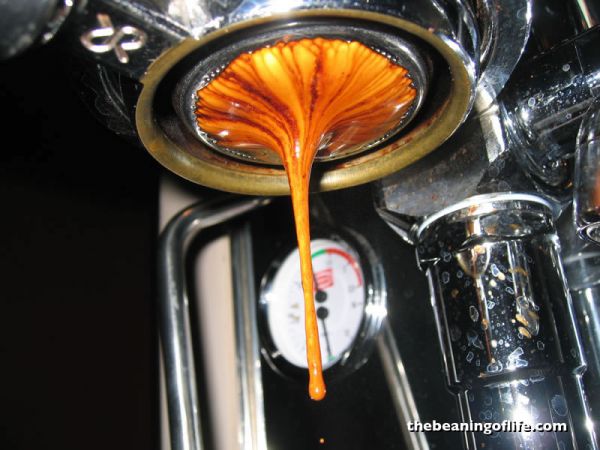 the cup at the end of extraction ended shot just after the photo. 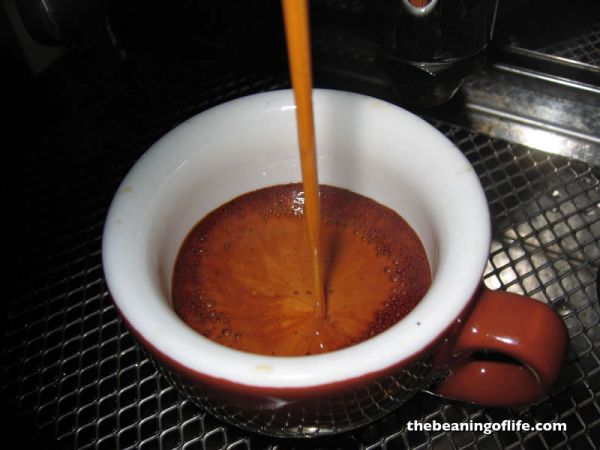 A video would be more revealing, but based on the stills, it looks as good as it gets.
Dan Kehn
Top

Responses like this one from my buddy Dan are driving me a little crazy.

Several years ago, people used to talk about improving the TASTE of their espresso. Developing the ability to taste well was difficult, as was developing the vocabulary to describe what one tasted. But we struggled and learned.

Then the bottomless portafilter came along. Almost overnight, the goal was no longer a great TASTING shot; it was a great LOOKING shot.

Haven't any of you had a mediocre-looking bottomless pour that tasted better than the perfect-looking pour that came before it? I have.
-AndyS
VST refractometer/filter basket beta tester, no financial interest in the company
Top

AndyS wrote:Haven't any of you had a mediocre-looking bottomless pour that tasted better than the perfect-looking pour that came before it? I have.

of course.. i have also thought about, if i use the spouts, how many other shots am i also tasting? especially in a cafe' how often does the inside of the PF get cleaned? that alone is a good reason why i use the bottomless and seek it in commercial locations. and it also looks cool. a picture is worth a thousand words describing the taste. the internet is a visual medium. we do taste with the eyes and the tongue, yes?

AndyS wrote:Then the bottomless portafilter came along. Almost overnight, the goal was no longer a great TASTING shot; it was a great LOOKING shot.

You're right, it's really silly and I remarked on the obsession with pour appearance a couple years ago:


HB wrote:I'm not responsible, but I did contribute my small part to the bottomless portafilter craze by publishing Perfecting the Naked Extraction. No argument that a chopped PF is an invaluable diagnostic tool. No quarrel that it's pretty neat to watch. No quibbling that it is easier to clean up, assuming you've addressed the issue of channeling. But why the undying fascination with photographing an extraction?

(From Neverending Novelty of Nakedness... Not)

I consider the "look" a diagnosis tool and nothing more. A perfect looking pour and gorgeous looking crema aren't a guarantee of an exceptional espresso. I've had plenty of very good tasting espressos with quite ordinary looking crema, and even more espressos that tasted ordinary but looked nearly perfect.

Bottom line: It's a heck of a lot easier to pull an espresso that looks good than tastes good! Another of my pet peeves is the obsession with producing gobs and gobs of crema. Don't get me started.

just for a second think about this:

imagine a world where the naked PF came first, instead of the spouted PF.

what would the benefits be for using the pants, other than splitting the shot into 2?

i personally think a spouted PF is gross regardless. it generally always has some standing water in there somewhere, maybe part of the last few shots as well.

if there were no difference in taste and im sure there is not much difference. .. what reason would there be for someone to make a PF with a bottom?

i dont think the shots are better tasting from either one or the other. i am sure we can agree that the taste isnt affected much either way.

Lets discuss the pros and cons besides taste and cool factor.

a wise man once typed: in a thread on HB


Those who close their minds to alternatives like naked portafilters, triple baskets, up dosing, etc. stop growing in the art.

we all love espresso many for the same reasons and many for different reasons. but the fact is we are all here enjoying the same thing in different ways.

I do not normally use a bottomless portafilter. I got caught up in the bottomless is better rage a year or two ago. Since then I have decided I prefer the shots from my single spout over the bottomless. It is less a taste issue and more a texture issue. The bottomless PF creates an abundance of crema, however that crema tends to be larger bubbled than a spouted shout. I prefer the finer texture and silkier mouthfeel I get from a single spout. It is like comparing stiff bubbly milk to micro foamed milk for me.

At one point I found myself obsessing over how pretty the shot looked, kneeling in front of the espresso machine as if offering up a prayer to the espresso god. I put away the bottomless portafilter, quit obsessing, and just enjoyed the espresso.
Dave Stephens
Top
← Back •
By accessing this site, you agree to the site's terms of service. If you need help with the site, please contact us.