Do you mix / stir your espresso before drinking it?

Tim proposed this poll in "Attack" in espresso tasting and the subject has come up before, e.g., SCAA Barista Competition - USBC 2007 (excerpted below). I sometimes give the espresso a gentle swirl before sipping, but haven't tried the "PT's flip" Peter suggested. How about you?


timo888 wrote:An interesting thing to consider when noting the attack of an espresso is whether you stir your espresso with a spoon, or not. The brandy is pretty much uniform from top to bottom of the glass, whereas with unstirred espresso there can be quite distinct layers.

Do you stir your espresso?

HB wrote:Pete espresso preparation was unorthodox: The shots were drawn into shotglasses and transferred to white demitasses. He explained this would help mix the drink's heavy and lighter notes. Judges were asked to taste the delicious chocolaty body, floral acidity, and warm lingering spice.

another_jim wrote:"Swirl before drinking" was a popular instruction to judges this year; for the same reason apparently.

ThePete wrote:I would encourage everyone to try the "PT's flip" as we have been calling it. Pull a double shot, one straight into a demi and the other into a preheated shot glass and pour it into a second demi and try them side by side. Doing a blind tasting is even better. You might just be amazed that both shots, especially on that first sip, came from the same portafilter. On a final note, I don't feel that this is a step that should always be done especially at a cafe. As I said before, espresso is a layered drink and I find that part of the enjoyment is tasting the changing flavors as you drink it down.

I've only used a spoon a few times (and I never take sugar, too sweet), but I do sometimes swirl (and thunk) an espresso, especially if I used the bottomless PF. I can't speak to taste change or improvements.
Jeff Sawdy
Top

Honestly, it's never occurred to me to stir it!
Rich A

I don't swirl my espresso on a regular basis because I sort of like the layered effect, but I do it occasionally if I'm trying to dial in a new SO or blend so that I can just taste a little bit and get an impression of what's in the cup overall. I started trying this after I saw Philip Search do it at his cafe when they were pulling SO shots and trying to get it dialed in.

On a related note, how do you guys taste your espresso when dialing it in? Do you taste every shot or spit it out? How do you get the best sense of what's in the cup without getting overloaded with caffeine by the time you're done?
Top

I never stir or add anything to an espresso.
If it's a mediocre shot, I call it a Cappuccino since milk goes into it to hide the shot quality and even then I only swirl the milk around in the cup to mix the flavors.
Top

Often I am drinking espresso as part of a tasting so I tend to give it a good stir first as some of the thicker, heavier goodness is sat at the bottom of the cup and without that stir the first sip isn't a great picture of what the coffee is like. When I was training for competition or working on a blend I didn't want to have to sip and spit my way through the whole espresso as it was likely I'd have to taste a lot more that day.

I think it gives a more even drinking experience sip to sip, though obviously some people will want the cup to evolve or change as it is drunk for the pleasure of variation.

No swirling here. One sip to coat the tongue and then two or three wonderful sips to finish.

you may change your opinion if you take 2 or three espresso cups and slip them under the stream to "split" the shot into separate cups for each section of the pour. even 2 cups will give you a noticeable difference between the 2. i guess the more times you split the shot the less variation there would be between them.

does that make sense?

i think someone made a shot glass thing to do this but i just used espresso cups.

RegulatorJohnson wrote:i think someone made a shot glass thing to do this but i just used espresso cups.

You are thinking of Andy's espresso cupping device. 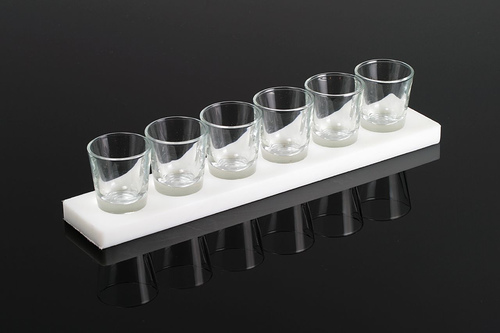 nice.
2012 BGA SW region rep. Roaster@cognoscenti LA
Top
← Back •
By accessing this site, you agree to the site's terms of service. If you need help with the site, please contact us .