I thought it would be fun if we had a thread that was dedicated to displaying our great coffee/espresso gear scores, whether they be from eBay, Craigslist, or just from a garage sale. I'm hoping people will share their stories along with their treasures, which will make the whole thing more fun.

To lead it off:

How about a nearly unused Ditting 804 with immaculate burrs for $55 on our local Craigslist. I've never seen a grind so even and consistent. 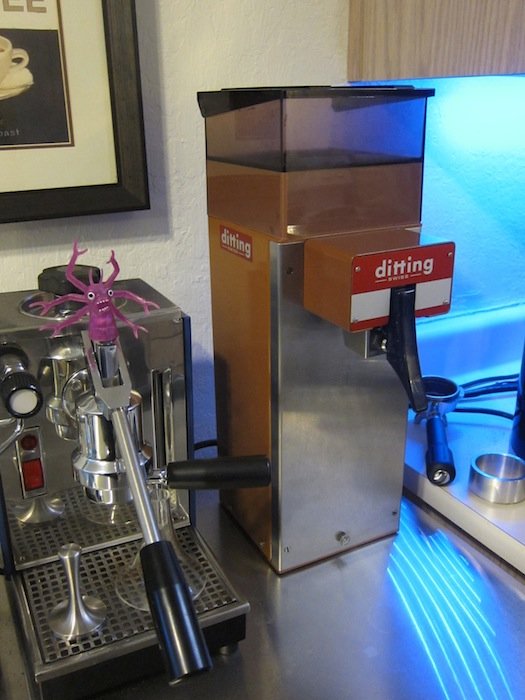 I check every day for listings for espresso machines and coffee grinders. I even check under the misspelling of espresso machines and a few other horrible hack job spelling attempts, hoping I don't miss anything. Somehow I missed this, about 4 days ago. A friend found the listing under coffee grinders and was the second person who contacted the seller. The first guy flaked out. Apparently this guy had a bunch of stuff left in his basement from a previous owner who wanted to start up a cafe and never did. This is more his score than mine, but I ended up with it. Now it sits proudly next to my other gear. Saved me dropping $1700 on the Mahlkonig Tanzania I was saving up for!
Top

Sorry Tom. I just wanted to point your attention that you have a typo in your post and missed a zero at the end, or maybe a "10" at the beginning of it. You probably meant 550 or 1055.

Glad I could help.

La Dan, his typo was probably not the price - in his excitement, I'm pretty sure Tom meant a Fitting for his Cremina. The coffee grinder in the photo can only be an amusing coincidence. But how can we blame him - given the Cremina prices these days, even a knurled nut under a hundred bucks is valid cause for celebration.
Top

Anvan wrote:La Dan, his typo was probably not the price - in his excitement, I'm pretty sure Tom meant a Fitting for his Cremina.

You can see it right there in the photo. Obviously some sort of mod to improve temperature stability. 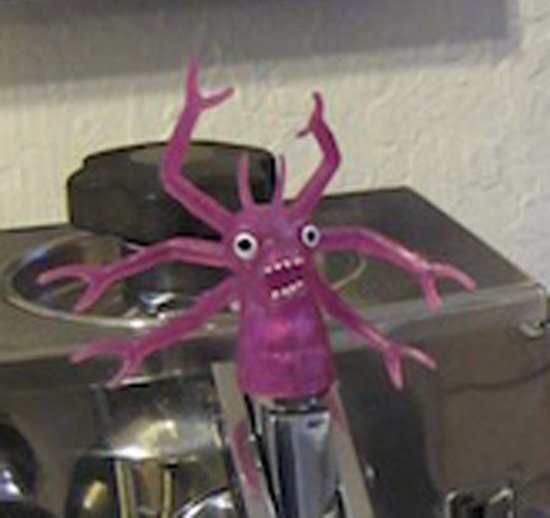 Bob_McBob wrote:You can see it right there in the photo. Obviously some sort of mod to improve temperature stability.

This little purple guy obviously sucks out too much caffeine while pretending to work on temperature stability. :tsk tsk tsk: Is this the real Coffee Monster???

DOH! So you got the Ditting - I think I saw it after 2 hours, but no one got back to me. Congratulations. I thought it was strictly non-espresso (according to other HB threads) - but you like for espresso?

TomC wrote:How about a nearly unused Ditting 804 with immaculate burrs for $55 on our local Craigslist. I've never seen a grind so even and consistent.

Does it have the press style burrs like the Bunn or the newer Ditting machined burrs? Auger feed?

Best deal on coffee gear was a few years ago when I bought two complete & running Majors for $175.
LMWDP 267
Top

The little purple guy came in the box of those coffee bean shaped ice cube trays. Couldn't bear to throw him out right away, so he guards the coffee bar to keep bad mojo away.

The burrs are the original ones, cast, not machined. I wondered if the newer machined and magnatized ( screwless) burrs would work in this grinder.

I don't use it for any sort of espresso, it's just there because that's where the BUNN G-1 sat.
Top

Nice, hope you paid your friend a finders fee.

Of course! He lugged that thing for nearly a mile, it weighs a bit over 50 pounds!
Top
← Back •
By accessing this site, you agree to the site's terms of service. If you need help with the site, please contact us.