Want to talk espresso but not sure which forum? If so, this is the right one.
← Back to Knockbox

I started serving my Grand Juror Duty last week. Serving is the right verb here, as in "serving four years in Sing Sing". A Grand Jury stint in New York is four weeks. No, it is not a typo. In a city where fortunes are made and lost in a minute, four weeks is a life sentence.

But, this is my civic duty, so I'm there. Besides, the bastards threatened to take away my espresso machine.

We have a short 15 minute break everyday, between the murder, theft, burglary, assault and other misfortunes that unfold in that room. We had a particularly long day today and as we took our break, I noticed that the woman to my left and a man two seats from me did not leave, but rather started pacing the room. I got up to stretch my legs, making chit chat with the two. This is how it went:

Woman: I'm dying for a cup of coffee

I: There is a big coffee vending machine outside our deliberation room - you have 15 minutes, go get a cup.

Woman: What planet are you from? Have you tasted that coffee??? It tastes like crap in a paper cup. Have you heard of Starbucks? I can't drink that *it.

Woman: Yeah, I can't keep up for two more hours like this.

Man in blue shirt: I'm going to pickup a thermos at Starbucks tomorrow. Man, I could use a tall Mochachino right now.

I: any of youse can break a five dollar bill for me?

Woman: What do you need it for?

I: That vending machine outside.

Woman: What's wrong with you? Didn't you hear what I just said? It's crap !!

I: Oh I heard you alright, I just wanted to hear it again

That coffee vending machine remained idle for a week. 23 people and not even one cup.

So what did I learn from that incident? That whole dialogue could not have been possible six years ago. In less than a decade, Starbucks managed to reprogram America's coffee preference and, I can't believe I'm saying this, raise it a few notches. There is a great opportunity to raise it a few more notches, but this will not be done by Starbucks. I think that we are going to see more and more small boutique coffee houses that sell quality in the coming years, and notice a slowdown in Starbucks' expansion.
Abe Carmeli
Top

I live in a different America than you. Here, Dunkin Donuts reigns. There are 7 of them within a 4 mile stretch along part of my commute to work. If you can look either direction down the street and not see one, then one will be built. I've never known of one that went out of business - people love them here. I can't count how many times someone has raced around me only to veer in front of me, cutting me off while jamming on the brakes so that they can turn into the Dunkin Donuts parking lot.

The majority order a "regular" coffee. You're thinking "well, at least it's black", right? I asked for a medium coffee years ago (my first Dunkin Donuts experience), assuming it would come black. They asked "Regular?". Thinking they were referring to size, I nodded "yes, a medium". No, a "regular" coffee at Dunkin Donuts is coffee with 4 packets of sugar and 4 pumps of "cream". And that's just for the medium sized coffee, which nobody orders. They usually order the 16oz. supercup with extra cream and extra sugar.

And that coffee machine at work is making somebody rich. I'm looked upon as an oddity.
Dolce Vita,

To paraphrase on that edgy juror's words: "what country are you from?". Wherever it is, it is probably more like the rest of The US than New York is. You have some serious mountains to move there, and I'm not talking about the two legged ones.

Thanks Abe for posting an amusing and thought provoking piece. Sorry to hear about the pains of jury duty...

It's fashionable to bash Starbucks and I'm glad you didn't. In my view, we owe them a debt for adding the term "espresso" to the US lexicon, and by extension, expanding the market nationwide so more speciality cafes could thrive. I don't worry about the Green Mermaid's potential world domination since coffee is not a zero-sum game. Afterall, nobody worries about hamburger sales killing off the demand for prime rib, right? 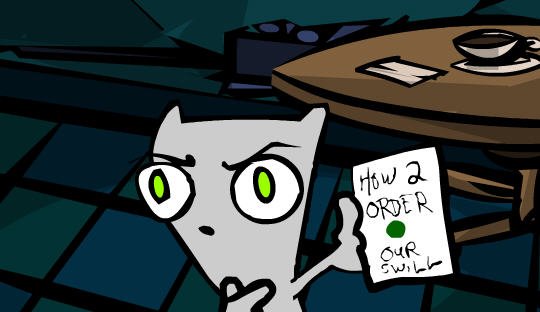 I think I've fiqured it out. It's the orange and fuchsia decor that draws them! Marketing brilliance!!!

We did have our first Starbucks open in New Hampshire a couple years ago, and it's not far from where I work. I can run over during a break. It's not a real Starbucks, though. You can't order a french press coffee, and the espresso comes from huge boxy automatic machines (not La Marzocco). It think most, if not all, Starbucks will be going that way. They can manually steam their milk, but the espresso is automatically tamped and brewed by the machine. No provision for ristrettos, either. If a new "barista" takes my order for a double macchiato, I get asked "What size?", and I'll have to explain what it is. The only macchiato they have on the menu is a Caramel Macchiato, and it's an entirely different concoction. And I've never seen anyone else order an espresso.

Things progress a little more slowly around here. But you're right, the times, they are a changin'.
Dolce Vita,

LOL, that one nearly killed me.
Abe Carmeli
Top

there's two things in this thread that I really wanted to comment on.


and the espresso comes from huge boxy automatic machines (not La Marzocco).

McDonalds, I'm not sure what they are like in the US but here in Aust they expanded their menu about 4 years ago with a range "McCafes" and they made a big song and dance about having real coffee machines and an espresso based menu. Well in the past 6 months, I have noticed a gradual slide away from the coffee machine and grinder. And it seems logical, why would they go to the effort of training people and having to deal with variance etc when they can put a big boxy auto in each shop and at the push of a button knockout an 'acceptable' drink, it's significantly quicker and if they still froth, as Cliff said, then they are still almost serving fresh coffee. I'm going to be bold and predict a polarisation of the coffee market, here in Aust anyway. At the moment every bakery, bank and dry cleaner has a single group and mazzer sitting around with the portafilters resting on the drip tray ready to swing into place to serve up a crap coffee. Pretty soon, I reckon we'll see the coffee market split into autos and not. comments from the US?


In my view, we owe them a debt for adding the term "espresso" to the US lexicon

I whole heartedly agree, in 99 I did work experience in North America, I was astounded by the complete lack of an espresso based coffee culture. That has certainly changed and even if what they serve is swill by our standards, it's still better than the burnt burnt burnt drip filter with 'cream' that I had to survive on back then.
Top
← Back
By accessing this site, you agree to the site's terms of service. If you need help with the site, please contact us.