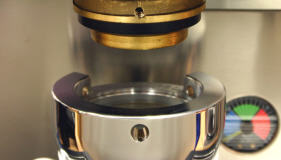 Comparing LaCimbali to other prosumer offerings is a study of what separates "9" build quality from "10". Lugging Junior around is the first clue that you're dealing with a heavy-duty machine in both senses of the word—it weighs over 70 pounds wet, which is 20 pounds heavier than a typical prosumer espresso machine. You don't need to be an engineer to see where the extra poundage is going—the group is massive and the boiler is made of thick stainless steel. Even the boiler's safety overflow catch is made of solid brass and the boiler's endplates look to be one-half inch thick.

In terms of maintenance, Junior is designed with the demands of a commercial environment in mind. For example, you remove only three bolts and the chrome-plated grouphead "donut" detaches, eliminating the need to crane your neck or poke with screwdrivers to replace the grouphead gasket—a quick tug and it's out.

Accessing the machine's interior is even easier.

Two small rubber caps atop each side of the cup warming tray (near the center looking at it lengthwise) cover access holes to the screws holding the top edge of each panel flush against the frame. To take off a side panel, first remove the rubber cap and loosen the screw beneath it (a couple turns only, there's no need to remove them). The bottom corner of each panel snaps into a retaining pin; gently pull the top of the panel away about two inches and then tug each bottom corner out and slightly upward. Repeating the same steps on the other side and half of the machine's interior is exposed, all by untightening just two screws. (The back panel is held in place by two screws on each vertical edge; the side panels must be removed to access them). 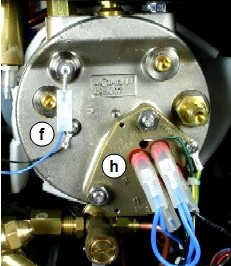 The photo to the right shows the side of the boiler and its fill level sensor (f) attached to a thin, light-blue wire, and heating element connections (h). Notice how the thick blue heating element wires near (h) are firmly attached to their connections and covered with a silicone tubing wrap; this eliminates the chance of touching wires shorting or them pulling loose during shipment. I tugged on them very hard and they did not budge.

Keeping these connections snug and sealed avoids potential problems—not that there's much chance of burning out the heating element in the first place because Junior has an over-temperature thermostat inside the boiler, running right along the heating element (thin, dark green wire entering hole above (h)). Most machines have an over-temperature thermostat on the top of the boiler. In most cases that works just fine, but a safety sensor in nearly direct contact with the element will react sooner than one mounted on the boiler's exterior.

As I inspected more closely, I noted other prudent design decisions such as:

I could go on and on, but I think this level of detail has already proven my point: The Cimbali Junior is conceived to deliver reliable service for many, many years. In the event of a problem, a repair technician can return it back to service quickly, which is of paramount importance to a café whose reputation and customer loyalty rests on the reliability of their equipment. 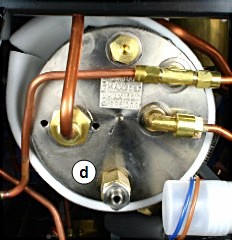 Minor adjustments and maintenance is a normal part of owning top-end espresso equipment. If your water has more than three grains of hardness, then it is particularly important to address the problem of scale build-up. Section 4, Water Treatment and Preventive Descaling for Espresso Machines, of Jim Schulman's Insanely Long Water FAQ describes in general terms how these homeowners can prevent costly damage by performing regular maintenance. Fortunately the combination of the adjustable boiler fill level sensor (f) and boiler drain (d) make this easy. For reasons of brevity, this article doesn't cover the procedure step-by-step. All machines sold by Chris' Coffee Service include water test strips, and again if your water has more than three grains of hardness, you should contact them to discuss your options for addressing this issue, which may include water treatment, preventative descaling, or combination of both. Improving the quality of the water you use by filtration will improve the taste of your espresso and save money on bottled water; and again, proper water softening will also avoid the #1 cause of costly service calls in espresso machines—scale build-up.

Although overall I was quite impressed with what I found, there was one miscue: Accessing the pressurestat to adjust the boiler pressure / brew temperature requires the removal of all three panels. Given that this is one of the more common adjustments for new owners, it should be more conveniently located.