The goal of velvety-smooth microfoam eludes some home baristas, and not necessarily because of technique problems per se, but due to the relative ease of frothing milk for a given machine. Plainly stated, some espresso machines are steaming dreams, while others make you work harder for the same result. The ease of frothing isn't related to a single physical metric like boiler size or heating element wattage. The balanced combination of steam volume, velocity, and the steam tip dispersion pattern tells more about how easily the machine froths and dictates the techniques that will work best.

Very often new owners who are frustrated by their recently upgraded espresso machine actually suffer from continuing the habits they learned on their previous less powerful machine. Comparing the speed with which different machines can warm water from 40 to 160°F is the first indication of this difference, as shown below.

Some owners prefer a more modest steaming pace since it gives them additional time to "finesse" the development of microfoam. The design of the tip has a big effect on the pace of steaming. So in addition to Junior's stock tip, I tried some others, including a single-hole "cheater tip" from LaCimbali. It wasn't my favorite of the three that I tried, but if you share Junior with someone that infrequently makes cappuccinos or lattes, the cheater tip will likely produce smoother, less airy froth for them than the stock one. The single-hole tip improves results for less practiced baristas because it has two intake holes on the sides that give obvious visual and audio clues when the tip is correctly introducing air (the "tch-tch-tch" sound discussed in the well-written Milk Frothing Guide). Finally, since there's only one fairly large hole, rolling the milk in the direction of your choice is easy, as most baristas do in the last phase of steaming to smooth away bubbles. 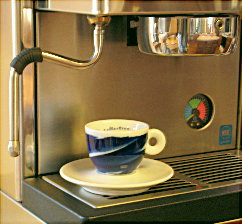 If you look closely at the picture to the right, you'll notice I substituted Junior's stock four-hole steam wand with the one that is standard for the La Spaziale S1. This three-hole steam wand is slightly shorter and has sharper bends, thereby allowing more freedom of movement. Unlike the standard Cimbali wand, it can directly reach all the way to the back of the drip tray (the stock wand extends lower and can only go beyond the forward edge if rotated; on the other hand, the S1 arm doesn't quite reach the driptray, so plan to purge wand condensation into a pitcher rather than shooting for the driptray—or risk being sprayed). In addition to the added mobility, I think the smaller holes increase the velocity and make for better small-volume steaming.

Generally I recommend adapting your frothing technique to match the equipment, not shopping around for "new and improved" steam tips that match your habits. On the other hand, for frothing small quantities of milk, it proved difficult to avoid injecting too much air using the stock tip. If your favorite espresso drink includes less than nine ounces of milk, the steam wand / tip combination shown to the right is worth considering.

The stock tip's combination of high volume (lots of heat!), lower velocity (four medium-sized holes), and multi-directional dispersion pattern (one hole straight down, three pointing downward and out at an angle) make it best for a twenty-ounce pitcher and about nine ounces of milk. Since the dispersion pattern is multi-directional, I begin the stretching phase that introduces air with the tip in the center of the pitcher and immersed about one-half inch into the milk; heating continues to about 100°F until the second phase of frothing, called texturing. Texturing involves spinning the milk to create a vortex, smoothing the consistency and breaking large bubbles that may have inadvertently been introduced. Instead of the whirlpool created with the cheater tip's unidirectional dispersion pattern, I switch to an "end over end" roiling for multi-directional tips. The end over end circulation is created by moving the steam wand to one side and tilting the pitcher slightly forward. This produces a standing turbulence wave as the milk below the wand is forced downward by the steam and the milk on the farther side of the pitcher recoils upward as the undercurrent curves back along the bottom (note this sort of rolling requires some serious steaming power!).