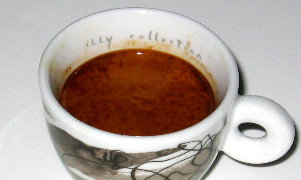 An earlier how-to, How I Stopped Worrying and Learned to Love HXs, focused on managing the brew temperature of prosumer E61 espresso machines like the Andreja Premium by Quick Mill. However keep in mind that most of its observations and suggestions apply only to E61 prosumer machines, not the Cimbali Junior, whose temperature management is considerably less complicated. In fact, I consider Junior an exceedingly civilized heat exchanger espresso machine. Temperature stability is one of Junior's claims to fame and months of use confirmed this to me, although it requires a few extra steps to initially "tame" Junior to a predictable curve after a long idle period. Like all commercial machines, Junior shows its stuff best when run continuously and run hard. If the Cimbali has any weakness in terms of temperature management, it would be when it's used intermittently.

This should come as no surprise for a commercial machine, which generally have heavy groups that need a few flushes and several shots to reach their ideal brew temperature. But for practical reasons, a home barista preparing only an espresso or two will want to get to the same point temperature and stability-wise as they would see on the fifth and sixth shot, but as the first and second. I had the Andreja Premium in-house while researching this article and recognized immediately that the flushing regime for an E61 was quite different than Junior's. The Cimbali Junior still needs to be flushed, but not nearly the same volume as a prosumer E61.

One reason for this difference is the size of their respective heat exchangers. Junior's heat exchanger is much larger and a smaller percentage of its total volume is submerged in the boiler water compared to Andreja's. The deeper a heat exchanger is submerged in the boiler water, the faster the heat exchanger's temperature will rise since water conducts heat much more quickly than steam. If you don't remember your high school physics, think of it this way—you'll sweat profusely in a sauna heated to 140°F, but the consequences of immersing yourself in water at that same temperature for even ten seconds would be gravely serious.

To get a quick feel for the performance characteristics of a new machine, I do a temperature profile test nicknamed "drop off." It involves pulling a shot and continuing to run the pump until the grouphead water temperature falls off, providing a general idea of the HX size and temperature stability without the need to disassemble the machine. In Junior's case, the results were incredible: After the temperature leveled around 12 seconds into the shot, it varied little more than 0.5 degree for another forty-five seconds (the pump auto-shutoff stopped the test at one minute). No prosumer HX machine that I've tested is capable of such lengthy tail-end stability.

How I Learned to Love HXs (Summary)

Managing the cooling flush regime, compared to prosumer heat changer machines, is a snap with Junior. The flush is short and sweet, and with the exception of the first warm-up of the day, only modestly affected by how long the machine has been idle. In that regard, getting fifth shot quality from the first shot of the day on a commercial espresso machine is analogous to parallel-parking an RV: It can be done, but requires extra maneuvers.

The general rules of thumb for Junior are below, including the exceptions necessary to wake Junior from a long slumber for the first espresso of the day:

Keep in mind that the above suggestions are for those who really, really want to squeak the best shot from Junior straight out of the gate. If you're a "keep it simple" sort of person, the abbreviated routine after five or more minutes of idle time is just one step: Press Big Flush. There's no need to wait more than few seconds for the temperature to rebound before beginning the extraction. After the flush, lock in and press Double for a metered shot, or the Free Pour button to start the pump and a second time to stop.

If you forget to flush over-temperature water from the heat exchanger, the first two-thirds of the shot could be scorching hot, depending on how much you've flushed through the group earlier. Even so, it's worth noting that the same omission on a prosumer E61 will assure blistering-hot boiling water through the entire shot. One of Chris' repair technicians who frequently works on Cimbalis commented that E61s run hot. After you've pulled a half-dozen shots on Junior, the basis of his observation is pretty obvious.

The bottomless portafilter highlighted in Perfecting the Naked Extraction dramatically shows the beauty of the extraction process; it reminds me of melted milk chocolate flowing into the cup. The contrasting colors, called tiger striping are excellent visual cues of a good extraction. Once settled in your cup, they form darker brown speckling and reddish-brown splotches on the surface of the crema referred to as mottling.

Below are the steps for pulling your first shots. Because managing the brew temperature is very easy on the Cimbali Junior, your attention can focus on the quality of the extraction. Let's assume that you've adjusted your grinder for a reasonable 25-27 second extraction:

Remember to relock the portafilter back into the grouphead to keep it warm.

At the end of a session, I also recommend a quick water backflush to clear the pathway from the grouphead to the pressure relief valve that empties into the back of the drip tray. Refer to Espresso Machine Cleaning - Why, How, and When for more details on a cleaning regime that broadly applies to the Cimbali Junior.