Ken Fox posted on this profile when reporting on his recently acquired 1 kilo Diedrich's roaster. Several people tried it and gave mixed reviews. The profile caught the eye of my coffeecuppers.com partner Bob Yellin, and he reprogrammed the PID on his Scirrocco and did side by side roasts of several coffees using it and his regular profile. He wrote that he had some very striking results and urged me to give it a try. He may post his own experiences later.

I did side by side roasts on the QM3 of a washed El Salvador Pache, a washed Guatemalan Geisha, both for brewing, and a tree dried Brazilian Yellow bourbon for espresso. The taste of the regular and Diedrich's profile varied in the same way for all three coffees; allowing me to post this list the overall differences of the Diedrich's profile I had no difficulty in immediately distinguishing the roasts or correctly identifying them. They varied in the way one would expect. The sugars in coffee caramelize at around 390F; Maillard browning begins around 290F. Carameliztion gives the dessert flavors; while the lower temperature Maillard reactions create malty, savory, toasty, and wood-nut flavors, everything one associates with a roasting turkey or goose. I grew up in central Europe, where coffee goes with cake and cookies; so this far more savory flavor was disconcerting. Those used to drinking coffee with food, on the other hand, may take an immediate liking to it. If one sets ones customary drinking expectations aside, both profiles are worth exploring.

One very disconcerting observation is that intermediate profiles, or blending the two roasts, always resulted in a taste that I found worse than either alone. On the other hand, that's probably why we don't put whipped cream on roast goose. We have distinct gaps, tasting no man's lands, between various types of foods.

Despite the faster finish, the slower start was enough to eliminate all grassy flavors; I had no trace in any of the roasts. Neither did the slow start create a baked flavor or flattened acidity. Roast that go over twenty minutes do flatten the taste, but the fast finish in this profile preserves the acidity.
Jim Schulman
Top

I remember I did a similar profile for the HB roasting competition. 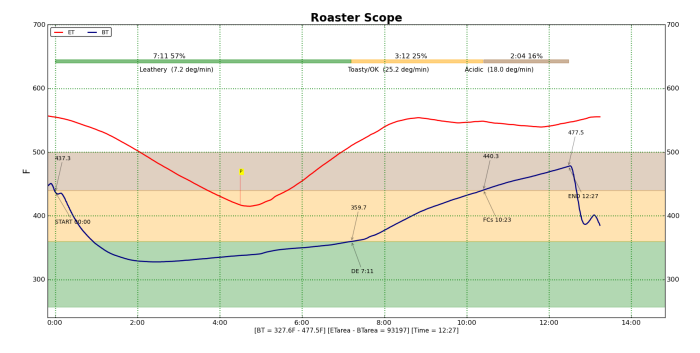 I'm not sure I'm reading it right; the temperature readings are 50F higher than most people measure. But it looks like you spent 3 minutes, not 8 going, through the Maillard zone; you spent just a very long time drying the beans. The profile requires 6 to 8 minutes after the beans go yellow and before you hit 1st crack.
Jim Schulman
Top

Interesting. I'm going to have to give this a whirl. Thanks for the nudge.

On a related note, I don't feel so bad now about describing the Vietnamese food tastes during the last homeroasting competition!

As I have posted previously, I had great difficulty executing this profile on my roaster, however I am getting a bit better at using it, through practice, and I'd probably do better now than before.

As to results, in those cases when I actually did execute it (largely by luck), I found that with the sorts of coffees I prefer, those that work well for SO espresso, I found that beans I had enjoyed as SO coffees did not show well with this profile. This is based on several "successful" roasts with this profile, so it is not what I'd regard as compelling evidence. More often then not, I tried to do this profile and did not "succeed," usually because I could not get the fast finish prescribed in the profile and instead it took 4 minutes or so to finish the roast after the onset of 1st crack.

I abandoned this profile primarily because I simply could not execute it reproducibly in this roaster, running off natural gas in my garage located at almost 6000 feet of altitude. Those few times I did execute it, I did not like the results with the coffees I tend to buy.

But none of this should be taken to mean that I have evidence that this is an inferior profile that produces bad results. For the overall group of specialty coffees, used mostly in ways that I don't use them, I have no opinion on how this profile works vs. any other. For those few coffees that are interesting enough to use as single origin espressos, and many of these come from Ethiopia in my experience, I have not found that this profile is as good as what I usually use -- a slow start, then rapid rise to onset of first crack usually by 9-10 minutes, then a drawn out phase to onset of 2nd (~4-5 minutes) after which I dump the beans and rapidly cool them. My total roast times are generally between 13 and 14.5 minutes.

As an aside, I used my "usual" profile on two back to back 2lb roasts today, using 1.5 year old DP Ethiopian Wondo Bonko from the good old pre-ECX days. It had been stored in the freezer and I have only 6lbs left of this formerly stellar coffee. Both roasts had nearly identical profiles which were very easy to execute, both roasts hit first crack within 10 seconds of each other, and were ended within 20 seconds of each other in total duration. Weight loss during roast was 16.2% in one case and 16.3% in the other. This is the sort of consistency I like to have when I roast, and I could never ever do that with Stephen's profile, my roasts would be off by at least 1/2 percent of weight loss and more by time, using the identical beans.

What is the profile supposed to look like on the last 2.5mins? If your going to the doorstep +/- of sc a rise of 40+ degrees are you to really push the just before the start of, into the first min.+(the most demanding of heat in the 2.5 segment IMO)? How does this effect the MET at the start of first? Do you also end up with a rather explosive fc? Or are you getting a sharp rise on the last min. to makeup time?
LMWDP #167 "with coffee we create with wine we celebrate"
Top

For my usual fast start/slow finish profile, I'm running 500F drum temperatures to the first. So I shut down the heat, run the fan flat out for about 30 seconds, until the drum drops to 425F (cupping roast) to 475F (rolling second), then I finish the roast with low fan, and enough heat to keep the drum constant. For the Diedrich's profile, the drum is at 425F at the first crack. So I used max fan and heat until I hit around 450F to 500F, then backed off both. This is a work in progress, and I basically went two half minutes regardless of where the roast ended up. I got pretty close to where I wanted to end, but not exactly, since I know the roaster fairly well, but the beans smell different with this profile and going by caramel smells doesn't work anymore.
Jim Schulman
Top

I suspect this type of roast wouldn't compete very well when tasted side-by-side with roasts that are sweeter, in the same way its hard to go back to turkey after you've eaten pie.
Top

I believe Bob liked the Diedrich's profile brew coffees more all round. The Maillard flavors fuse with the acids in a way the caramels do not. The result is a more focused and clear cup.

I have to admit to more of a sweet tooth, at least when it comes to coffee; so I preferred the regular profiles for espresso and one of the brews. But the other brew, the Guatemalan Geisha, has always been lackluster done conventionally; the roast tastes are not distinguished, and a very light roast tastes raw. Substituting the Maillard flavors for the less than great caramels helped this coffee a lot.

Bob thinks it may particularly shine for island coffees, which have lots of sweetness in any case, and where there are very interesting malty and sherry tastes to be had early in the roast. I also think it might do wonders for Sumatra, which are also about wood and forest flavors. Finally, great Kenyas have a hint demi-glace, they are not about sweetness, but complexity, so emphasizing the Maillard flavors might bring out something spectacular.

In any case, it's not always about what one likes, but about knowing how to work the flavors in general, so you can bring out what's great in a coffee.
Jim Schulman
Top

I've recently substituted 15min profiles from 11min for EVERYTHING and am finding a bigger, deeper, fuller, more satisfying cup. The flavors are definitely more integrated, less pointy...round. I do think more acidity can be left behind and that generally that makes the final minute more crucial on this roast profile; however, with a lightweight air roaster, I'm finding that much easier to nail than the twisty 11min curve I had been using.
-Marshall Hance
Asheville, NC
Top
← Back •
By accessing this site, you agree to the site's terms of service. If you need help with the site, please contact us.