I've been gather notes on this roaster and thought I should get a post going. 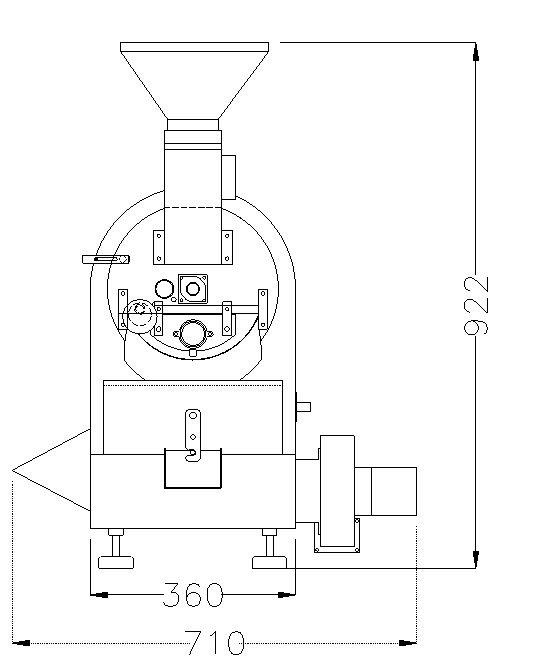 Some weeks ago the forum was hit with news of the upcoming next-gen high-capacity Hottop, but the heavy interest in this long-awaited roaster gave way to lamentations of what many considered to "way too high a price" for the likes of a roaster whose specifications don't seem up to snuff against commercial grade alternatives in the nearby $6K range. I fell into the group and noticed that the ensuing backlash led forum participants on to survey low-cost alternatives for those wanting a large-capacity roaster, commercial quality roaster, at least in the 1kg range (after all the new Hottop was claiming a 2kg capacity), for the home enthusiast. Sure enough, the recent onslaught of low-cost Chinese roasters surfaced in these discussions, many of which have either unknown or dubious track records. One roaster, however, caught my interest: the TJ-067 from North Coffee. I've since been in contact with the company and thought I would share what I found so far, since the time seems ripe as new threads have popped up regarding other Chinese roaster entries.

The whole next-gen Hottop letdown got me thinking about what I'd want out of a large-capacity commercial roaster for the home enthusiast, some of which include:
A quick perusal of the TJ-067 specifications (both the gas and electric versions offered) give me the impression that the first 4 requirements would be met. The bloody thing is 200lbs (if the specs are to be believed) and has large externally-mounted fans with variable speed control. While there would most likely be no issues with power delivery from the gas version, the electric version sports 3500W of power from 5 heating elements. Drum size is 250mm in length and 225 in diameter in both solid and perforated drum options (gas version is solid and electric is perforated by default), which in my estimation would volumetrically support theoretical loads approaching 2kg. The cyclone is independent of the roaster and appears to hugely outsize the 1kg capacity needs of the roaster.

Regarding damping and ventilation, the roaster appears to have gone through a design metamorphosis over the last 1.5 years and if you pay attention to the photographs on the web site, you might be led to believe that they are different roasters models, when they are in fact they are versions of the same model, as outlined as follows:

The first version had a damper with adjustment wheel and exhaust fan mounted directly on the chimney, where ventilation was only controlled by the damper on concert with a fixed-speed fan. 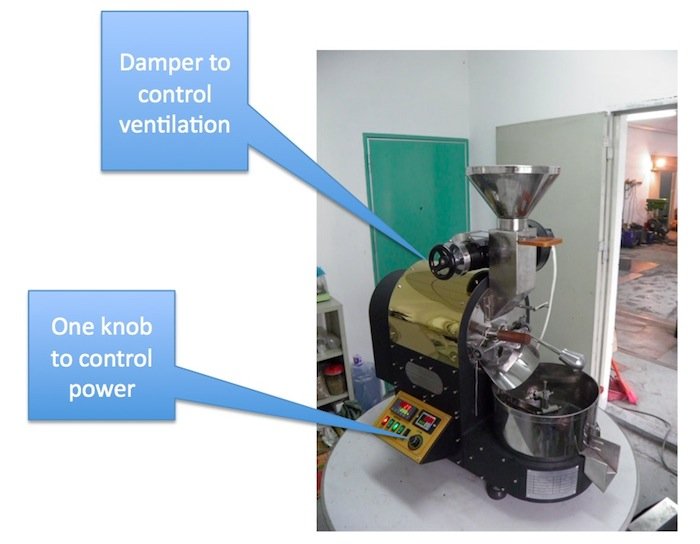 I have to admit the damper control looks cool but this version gave way to a second version that dispensed with the damper and moved the fan to rear of the roaster, but in exchange offered full fan speed control. The cyclone would connect to fan by a flex hose (not pictured). 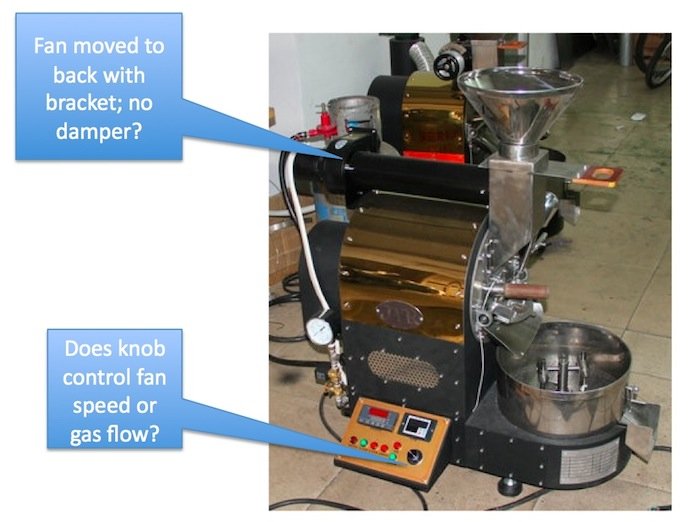 The third (and current) version moved the adjustable-speed fan off the roaster and onto the cyclone itself, supposedly to improve chaff collection and flow into the cyclone, but this means the flex-hose needs to attached to front of the roaster at the chimney, and to these eyes, this looks cosmetically worse and hose sag may cause ventilation issues. 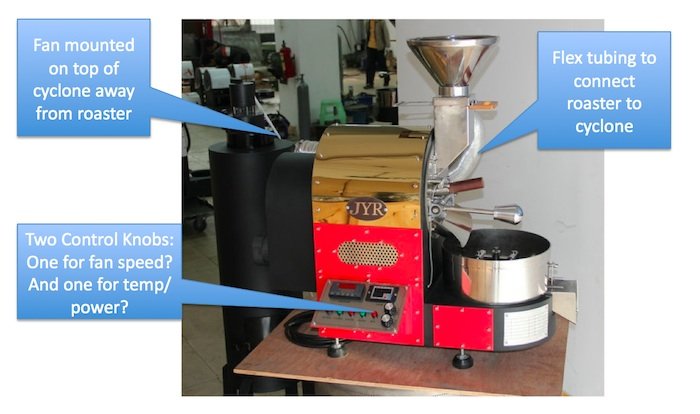 As such , I suggested to North Coffee to consider making a stainless pipe attachment from the roaster to the cyclone to create more integrated setup, as per what can be found with a Mini 500 or Cafemino. After a few weeks, they took up this suggestion, (and mind you I have no business affiliation with the company) and provided and updated version, that looks a lot better IMHO: 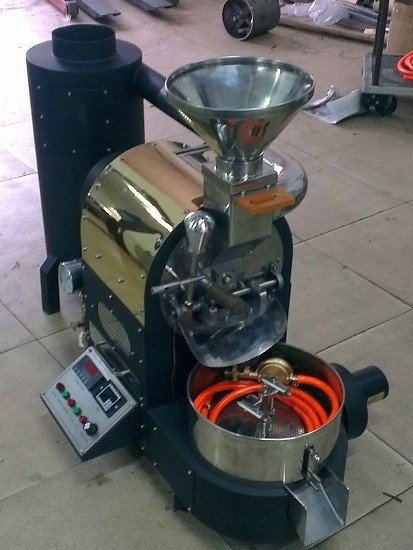 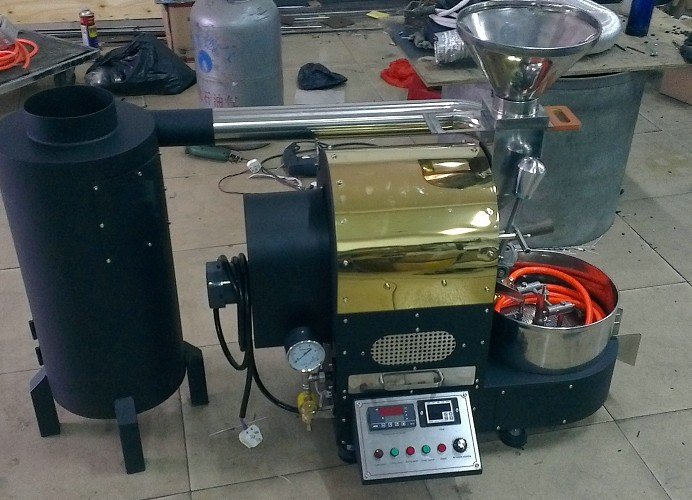 Regarding requirement 5, the thing that got me going on this was the thorough early adopter experience of TJ-067 roaster shared on this coffee forum from down under: crema coffee forum

Here, there's some good mod-friendly feedback (retrofittable parts, easy access, etc.) on the roaster and the roast profiles show both low drop temps and fast turn-arounds with 1kg loads that seem to imply that the roaster can operate well at this sweet spot, which is particularly interesting considering that this is the electrical version of the roaster being exercised. One would assume that the gas version could easily be pushed further into 1.5kg territory.

Finally, regarding requirement 6, it looks like this beast can be had for a price well South of the going price for the impressively well-built commercial-grade Mini 500 (thanks Henry for the demo) and less than half the price of what the next-gen Hottop is rumored to go for. Shipping seems reasonable, though destinations appear to be only to west-coast ports: for California, its Oakland and San Pedro.

I checked out their website and they have several different 1kg units as well as larger roasters. Pretty neat stuff. I'll be interested in the feedback on your post. This unit is probably beyond my scope at the moment. More than likely I will be getting a HUKY 500. Whirly-pop roasting has gotten quite old quite fast.

Thanks for the post on the TJ-067
Any Idea what the readouts that are presently on the roaster give ...
and now that they went from two "dials" to one .. what it controls.

Give us feedback if you go for it ... interested ..

The two digital readouts are for temperature and timer. I believe you can set both temperature and time alarms, but no PID for profile control. Judging from the crema forum, it looks like there's plenty of space to retrofit this digital components with a PID to control a roast profile. Or better yet a TC4C hooked up to Artisan or RoastLogger to automate profiles as far as one desires (the electrical version being the best to automate in this regard).

Just checking in and subscribing to the thread. Mine by the way has been faultless for over a year and roasts very consistently.
Levers RULE :-)
Top

Would you get the electric version or go for gas ... I'm leaning toward LPG - propane.

I ordered the Electric version and 2 weeks later it is being loaded onto the ship. Now I have to wait patiently for a big crate to arrive at my doorstep.

Thanks for the post slickrock, very informative. Also Beanflying has plenty of experience with using the original 1kg design and it's good to know that it is still going strong. There is also another 1kg coffee roaster being sold on Amazon and ebay with an analogue temperature reader near the tryer. Looks very nice but is half the weight of the Northcoffee roaster. Heavier does not necessarily mean better, but to me it is a good indication of quality of the build.
Top

In the US the biggest reason not to go Electric would be your 110V unless you aleady have a 220V circuit at home. The other major benefit of gas over electric is slightly quicker response time to heat changes but you just need to learn to deal with it (proactive not reactive) earlier. Technically in Australia this sort of device would require gas certification in particular if it was going in a commercial setting.

Also don't 'assume' North Coffee are necessarily the manufacturer because they say they are, plenty of Chinese companies claim to be the manufacturer of all sorts of goods and are in reality just reselling

I am looking to get TJ-005 from them , they said i can store roast profile but have to make sure about this. The machine doesn't have adjustable drum speed but they said it can be added with extra fee , do you guys think it is something i should get ?

Also beanflying will you please send me bank account number or paypal email they use to accept payment ? I just want to cross check before dealing with merchant without using escrow.

Thanks
Top
← Back •
By accessing this site, you agree to the site's terms of service. If you need help with the site, please contact us.