A few of us agreed to purchase some greens of this washed Mexican Organic coffee and participate in a roast and learn. It is available on sale at Burman's and I don't know how long the sale is on, so I thought I would go ahead and post up the topic header.

:The web page of the coffee producer and importer: San Cristobal describes each bag being traceable. I think I will reach out to Burman and try to get the numbers. It might be interesting to start out with that learning about coffee importing and traceability.

Anyway, if you want to participate, order some greens.
LMWDP #198

Jon Burman was very kind to promptly provide the number I requested: GTN4504018 I set it as a link to the page where the number can be entered.

Here is a screenshot of what comes up: 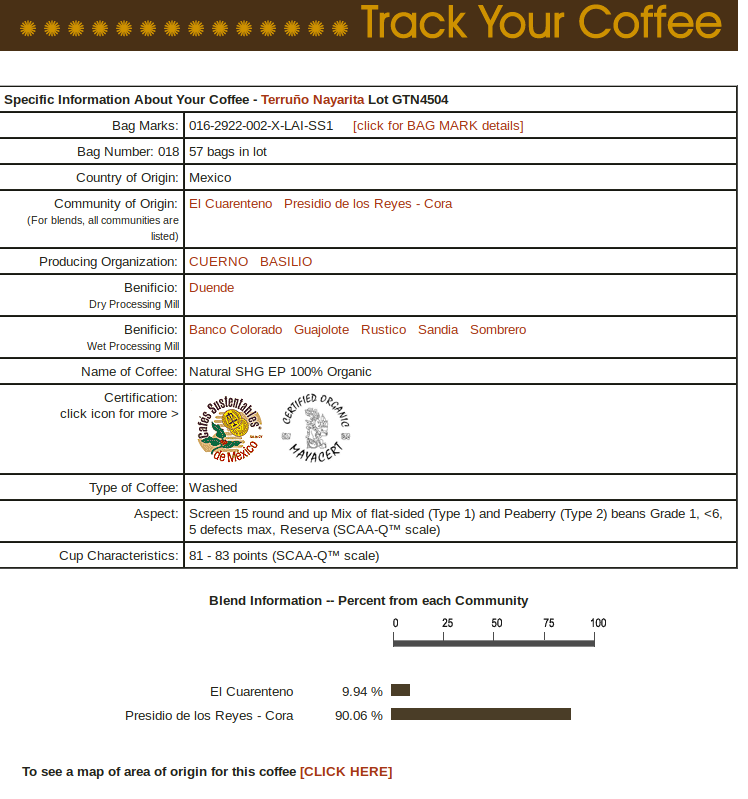 Got it delivered today so I tried roasting it. Here is what I've got: 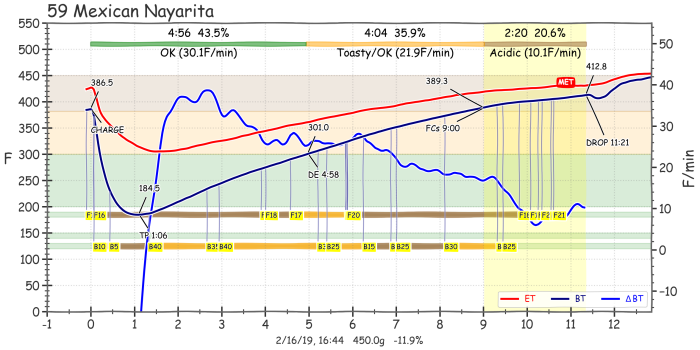 The beans looked and tasted underdeveloped with roasty notes at the same time (faced from too hot charge). So, less heat after charge next time and faster burner drop to stretch development.
Top

AlexGS wrote:Got it delivered today so I tried roasting it. Here is what I've got:
<image>

The beans looked and tasted underdeveloped with roasty notes at the same time (faced from too hot charge). So, less heat after charge next time and faster burner drop to stretch development.

Before you change charge temp (which seems fine) consider this:

A gradual down slope in delta BT with no plateaus, peaks and crashes might be the answer
LMWDP #603
Top

I understand all of this, but no. It tastes underdeveloped and the beans are bit bumpy on the surface, not glossy. The taste has sour part combined with green bean like after taste/aroma. I also roasted mexican chiapas the same day, and that was developed as expected. Anyways it was first attempt with the beans, will try roasting it today again.
Top

This is my attempt. Crash and small flick but overall promising. I messed with fan settings more than I wanted to but was worried about crash from prior smaller charge weight. Important to keep in mind that my probe is off by close to 40F from most folks

To be exact I dont bother to cup (since its not my forte) but I did brew this as a pourover at 17:1 on the origami

I get some malic/ apple tartness up front that smooths out with nice sweetness.
Almond nutty on the finish
Very smooth body throughout.
Roastiness for sure but I just roasted it so cant be sure if this is just too early or my crash/flick also contributed. Likely a bit of both.

I would consider roasting a bit more ... just a bit short of second crack next time
Top 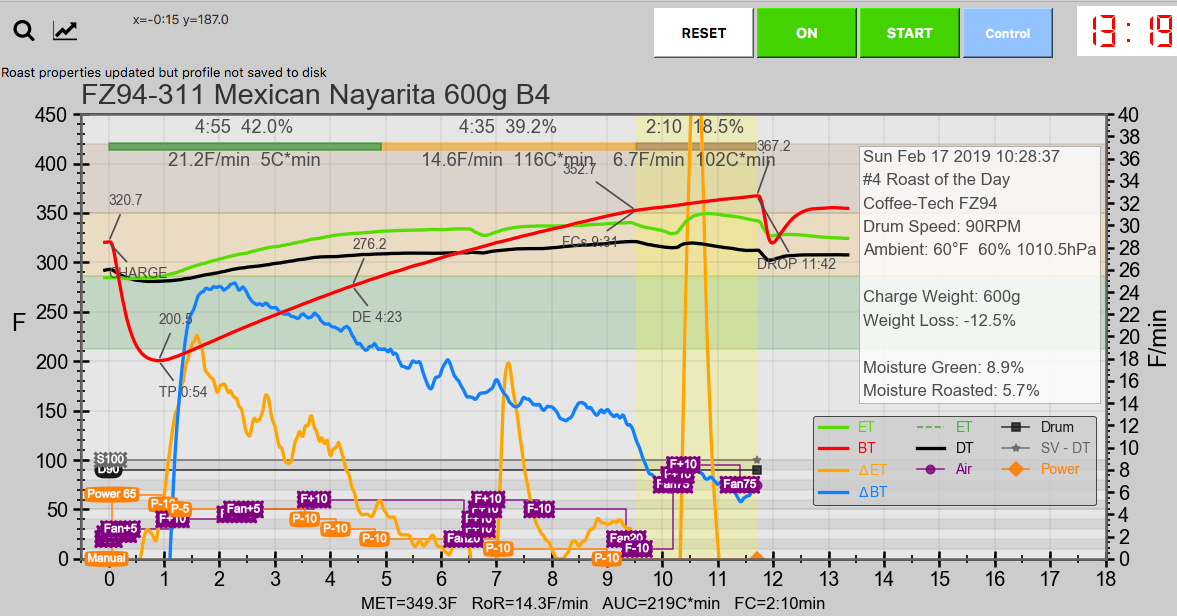 I was shooting for a 5/4/3 to get just to the initial pops of second crack.

Four batches and they all crashed. Not sure what's going on with these but the depth of the crash left no energy to really continue the roast successfully. I'll taste them tomorrow but I'm guessing they will be baked to crap. 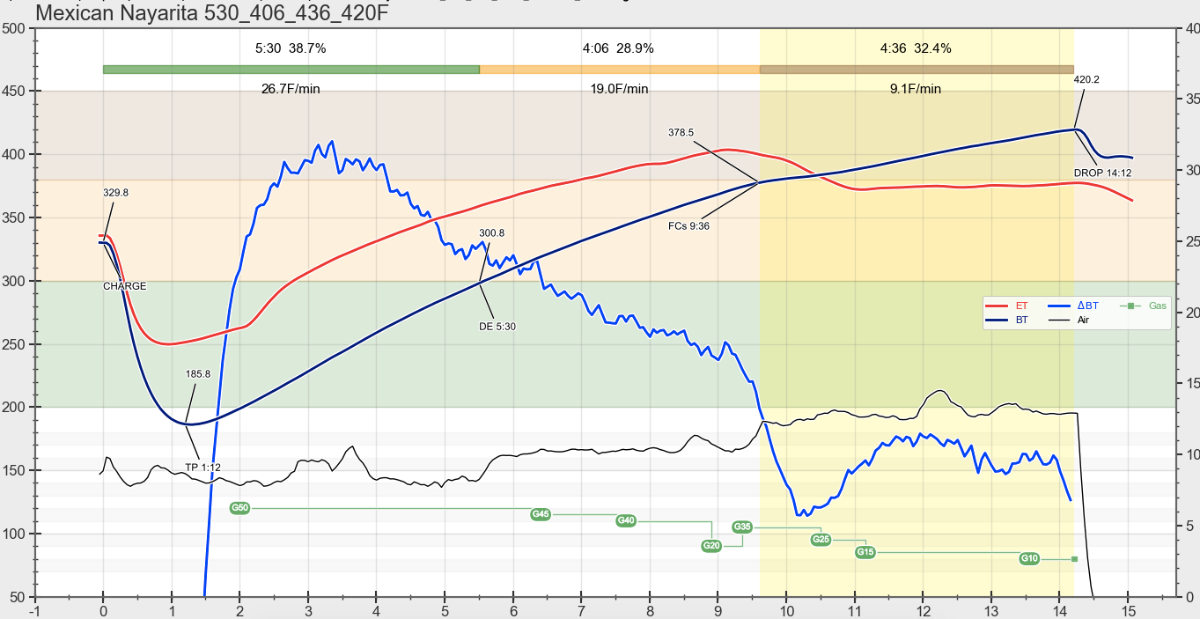 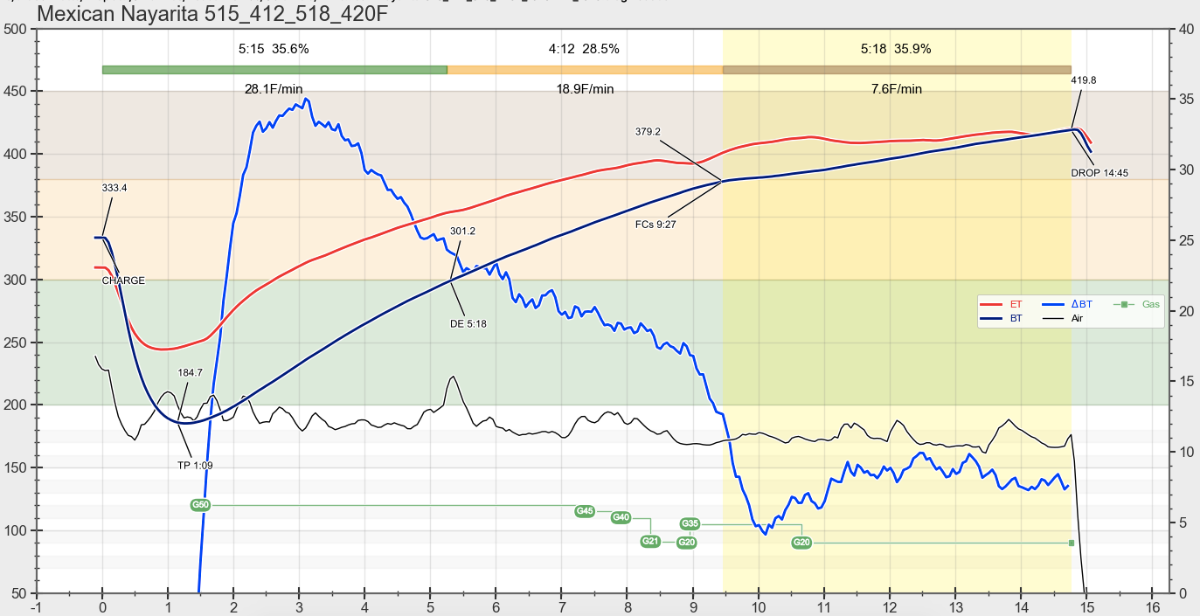 @AlexGS Was your roast a little beyond end of 1C or more than a little? I would think based on time and temperature than you were post 1C at drop.

@cataneo yours was probably dropped at end or within 1C. Can light roasts like that have roastiness? I suppose so but is that an taste in the bean or something else? My first go was a light cupping roast and I caused a surge in my system, freezing artisan. Bad timing for that, it is the only such freeze I've had in probably over a year.

So, @Moxiechef, I regret not seeing if my low charge mass roast was crashy since I finished the roast monitoring my TC4 LCD rather than artisan/computer.

I divided out 6 340 g batches from the 5# I ordered and the remnant of about 225 g was a cupping roast, which I will try to learn from blinded against 4 similar light efforts, a washed Ethiopian, a natural Ethiopian, a Colombian (bourbon noir), and another cooperative coffee, Atitlan Guatemala.
LMWDP #198

now more than ever
Top
← Back •
By accessing this site, you agree to the site's terms of service. If you need help with the site, please contact us.