This is a good R & L IMO, thanks for sharing your attempts to tame the crash. I think Flint's suggestion of starting FC at a lower RoR makes sense, the vigorous release of moisture at FC's @ higher RoR would make for some major temp changes around the BT probe.

How about making more aggressive gas cuts very shortly after DE for the first half of Maillard until FCs? That would elongate the Maillard and also allow for the beans to release moisture more slowly leading up to FC. The crash seems to be from a drastic release of moisture in FC that could potentially be mitigated with a longer Maillard. Bunching up the energy right before FC seems to make the crash worse. I have seen improvements using this technique to help prevent plateaus on an Ethiopia I have and the roast smells way better 4 days off roast than other attempts I have with the same bean.
Top

Well since your brainstorming, what about actually keeping temp high but turn up the fan to reduce the moisture level in the roasting chamber.
Top

Right, yes that's a good point. I think the airflow being set to an efficient convection level for the charge weight makes a lot of sense. After following the recommendation of many here on HB about finding the most efficient amount of air for your charge weight I now deem that an essential component of roasting. I don't alter my air at any point in the roast though, I have done that and it seems to strip off some sweetness in the latter stages of FC. Either that or I'm just doing it badly (most likely that lol).
Top

I have been intrigued to see if I could get this bean to full city without crash and flick. So I grabbed a few more lbs (and a organic decaf from Peru, and some Indonesian offerings while I was at it)

I'll cup my four efforts from today on Saturday and if any stand out as a success will post a curve.

I tried some of the suggestions of the last few posts here. More airflow, quicker cut to lower heat, just more ways of getting to dip and flick or dip and stall. I don't think prolonged development beyond 25-28% is what I want so I stop at 28% in general when roasting toward FC or beyond.

For my very final roast, maybe I should try a basically conduction roast. low airflow a few steps below the match test. Can't hurt to try. We'll see after I cup these Saturday.
Top

Seems worth a shot indeed, the decreased airflow would stretch the roast time and potentially dry out the beans slower and more gently. That could lead to a less drastic/more controllable dip in RoR post FC.

Then again, it might not affect anything lol. Maybe this bean is crashing for another unknown reason. It'll be interesting to see what happens regardless 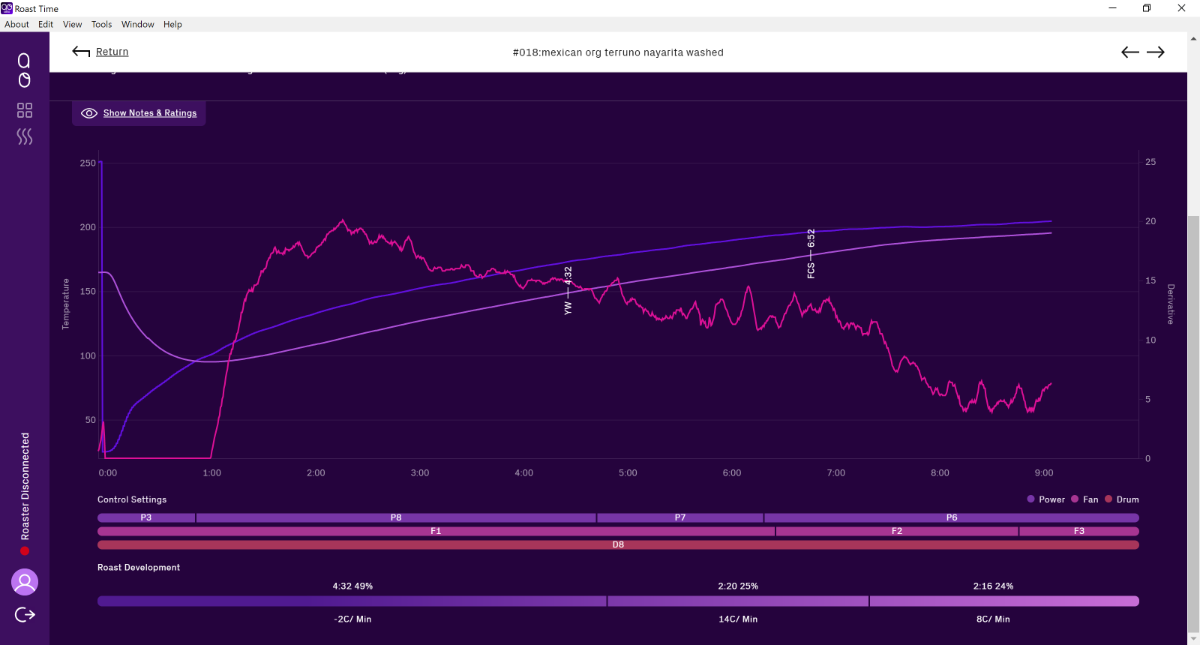 This was my third attempt from a week ago. 1 lb batch

My first two roasts ended on the light side and I was hoping to get this one a little darker to bring out some more chocolate notes. I tried to keep the RoR higher so that I could get it darker and still have a declining RoR during development. However, this one kind of got away from me and was a quicker roast than I was hoping for. I changed a few too many things about my roast approach so wasn't able to guide this one very smoothly. I would have preferred a longer maillard and roast in general so I'll have to try again.

As far as taste, it did have a little more hint of chocolate, although I think my previous attempts came out smoother. This definitely isn't my favorite bean but i've been blending it with some other more acidic or chocolatey beans and brewing in a chemex and it's pretty good. My coworkers are bigger fans of it than I am.
Top

My final effort, a conduction roast, dip-flicked as usual. I took it to 28%. So I will have 4 convection roasts and 1 conduction roast to cup and try to see if I can taste blind the conduction one, all at 38% dev for a full city - cup.
Top
← Back •
By accessing this site, you agree to the site's terms of service. If you need help with the site, please contact us.