By my limited knowledge I think prolonging maillard to help drive off moisture would be wise. My theory is that this would limit the high exothermic state that occurs at FC and likely causes the tendency to crash.

I take it that you view the "crash" as the cooling effect from the beans expelling all their moisture at 1C?

I wonder if, when you view the profile, if there is a slight peak before 1C?

In other words, you've lit the fuse for exothermic reaction, so you pull back on the power and let it do its inevitable pop and outgassing without pumping in extra energy (this would be different from lengthening the drying phase)
LMWDP #603
Top

Are you referring to the gas dip that SR recommends for these types of scenarios? I have never used that method but it seems to work according to those you implement it...worth a shot right?
Top

I think we're on the same page. I micromanaged some roasts in the past using that technique and it seemed to work.

For example, in a recent roast, I examined my profile. I saw the ROR bump before 1c then dip and flick. So I traced back up the ROR curve from 1C and figured I could reduce power 90s before expected 1C. I haven't been too disciplined in the last while though

Yeah, that seems to be part of what the SR gas dip entails. I know there is more to it but I have never used it so I don't feel comfortable giving the details. There are a few roasters on the forum who have profiles I have seen using this method and as I said they have had success with it. I never knew about it when I was experiencing some serious crash beans but now I do know I have some stable(r) greens and haven't had a need to try.
Top

As predicted, flat and hollow. A little roasty too but I'm thinking that's because I took them just a few pops into second crack.

I'll pull some shots of them this weekend.

Tried roasting a little faster and a bigger dip and it still crashed beyond anything I've ever roasted. 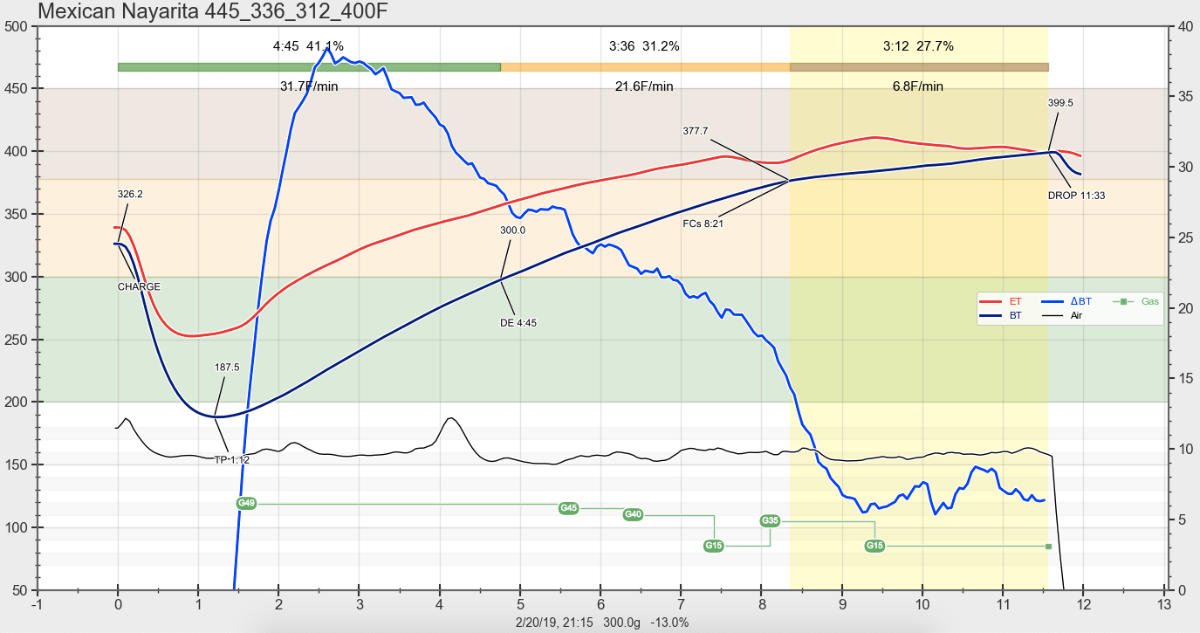 My ET is way higher than these sample profiles when I charge. I might have 400 BT charge temp with 476-500 ET. I maintain my ET using a PID. For instance I might run my PID at 476 and lower it around 1c. This provides plenty of energy to coast through the roast. That's for 300-350ml by volume of greens. (Around half pound)

With the ET and BT so close in these samples, there is no "bank" of energy in ET to draw on later in the roast. You can see this with ET and BT curve close together, or even crossing.

Are you watching BT, deltaBT Or ET during your roast? Try watching ET and glancing at the others.
LMWDP #603
Top

I think our ETs read very differently. Here's a Colombian with a little Rwanda I had left over that I was roasting for espresso. I took the gas dip a little too long but it was still tasty.

My ET is generally in a similar range as this profile. 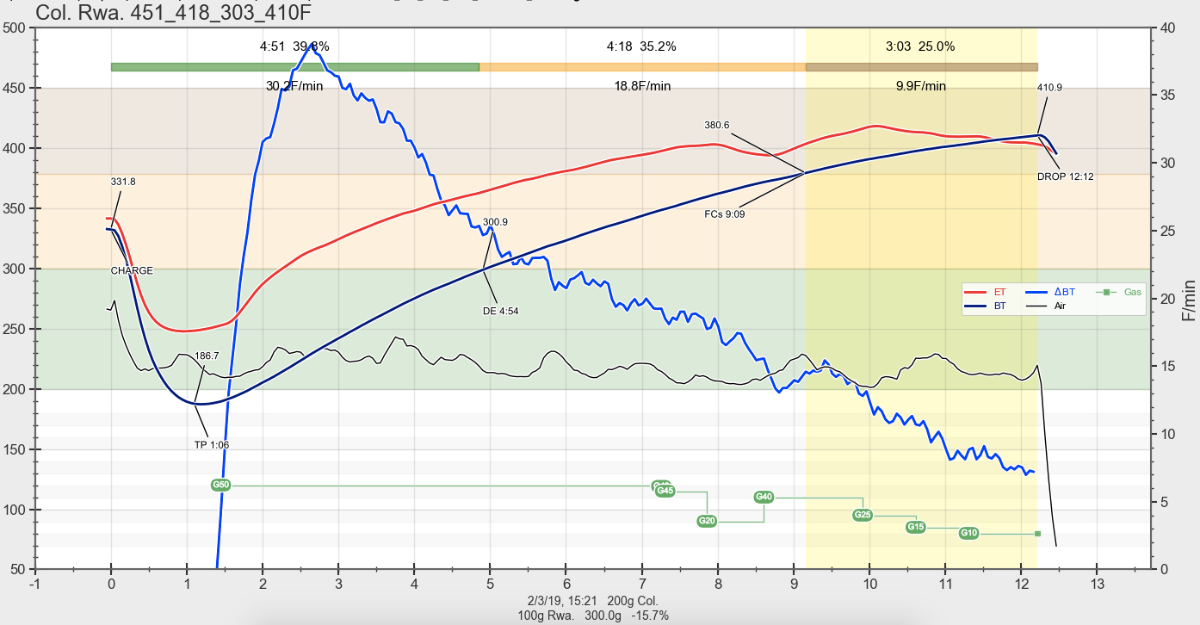 David are you referring to a probe placement similar to the "MET" probe on the Huky? My ET & BT are close to each other and so not far apart in temp, but my MET is in between the outer wall of the drum and the inner wall of the shroud so as to give an idea of the energy stored pre-Charge. Here is an example profile to illustrate:

happycat wrote:I take it that you view the "crash" as the cooling effect from the beans expelling all their moisture at 1C?

I wonder if, when you view the profile, if there is a slight peak before 1C?


I didnt quite notice it, but in fact there was a slight peak not long before the crash!!

Yes indeed, I've heard that mentioned as well, never quite dawned on me that I should be able to translate gas dip to electric drip (ha?) and the following resulted:

In other words, you've lit the fuse for exothermic reaction, so you pull back on the power and let it do its inevitable pop and outgassing without pumping in extra energy (this would be different from lengthening the drying phase)

Im not sure that I agree completely with this idea, By cutting heat (whether by gas dip or elecric dip) at the right time - you're still prolonging the 'maillard phase'. I believe this has effect of allowing more moisture to be driven off before official FCs so that remaining moisture is lower and doesnt cause the crash??? Of course this is purely educated speculation.
Top
← Back •
By accessing this site, you agree to the site's terms of service. If you need help with the site, please contact us.