That is very interesting. Now the $64,000* question: Is it possible to maintain a given profile with less air and more heat and visa versa?

First off, thank you.

To all whom it may apply:

Almico wrote:That is very interesting. Now the $64,000* question: Is it possible to maintain a given profile with less air and more heat and visa versa?
*Literally

The thing is, when you raise gas, airflow increases aswell. I suppose you could make a burner adjustment, then go over to the control panel and change the VFD on the circ fan... As for myself, I don't feel the need to start messing around with the machine to that level. Coffee is tasting good using the machine normaly.
Top

That's what I thought. So it is possible to tweak the fan and drum, but being manual adjustments, it would not be controlled by the software.

And I would not mess with those settings either, if it wasn't necessary. Any changes to those VFDs would change how the coffee reacted to your profiles. Like putting taller tires on a car, the speedo would give misleading readings.

Still, very interesting. I'll be talking to Rob Hoos next week at Brooklyn Coffee Roasters and will grill him for more info.
Top

Yep, thats right. I'm not going to be changing any settings anytime soon. Only 400 batches so far.

Report back once you've heard from Rob. I'd love to hear what you've learnt.
Top

I am very curious about the role of compressed air, and water supply line to the Loring. Is compressed air part of the airflow for recirculation of air through the roast chamber and flame? Don't fans serve that purpose? Is water used to quench the roast? Or what does the water line accomplish? Do the 7, 15 and 35 kg all require gas, water and air lines?
LMWDP #198

All newer Lorings require gas, water and air. The roasting chamber is pressurized many of the mechanical parts are controlled pneumatically (purge gate, drum door, etc.). The water is not used to quench the coffee, but to quench the chaff; as a last-resort fire control mechanism in the drum; and to hydrate the recirc column. It doesn't impact shelf life like you'd see with big multibag roasters that use quenching to cool the coffee (on the contrary I've observed longer shelf life with coffee roasted on a Loring)
Top

The S7 doesn't have an air hookup. Charge and Drop gates are operated by electric motor.

The chaff quench is a cool feature. There is a nozzle at the top of the chaff barrel that sprays water automaticly at the end of the roast. Spray time is adjustable. Damp chaff doesn't catch fire (the burner is dirrectly abobe the chaff barrel), takes up less volume and is easier to scoop out.
Top

And still being intrigued by the idea of compressed air pressurized roasting chamber (is that a thing?), I am curious. Is the S7 designed differently as to that feature?
LMWDP #198

Spent the evening at Brooklyn Roasters, with their Loring Peregrine and RH. Loring was sponsoring the event. It was a great time with pizza and beer and lots of elbow rubbing. Big thanks to Dave and Mike of BR for hosting the event.

Down to business...I'm in the market for a new roaster, so I was asking all the tough questions. I felt like a wet blanket, but before I drop $60K+ on a coffee roaster, I want to know exactly what I would getting.

The evening started out watching a Sumatra roast and discussing how the Loring works. I asked to be able to see the RoR curve and was told that the Loring does some special algorithmic calculation in "real time", but cannot display the curve. That was very disappointing. RH also depreciated the significance of the crash/flick phenomenon, calling it a temperature probe anomaly, and that the way a Loring roasts bypasses the effects. I found that disappointing as well, since I've be proving over and over again to myself just how important a steadily declining RoR curve is to sweetness and dynamics in a roast. More on that latter... 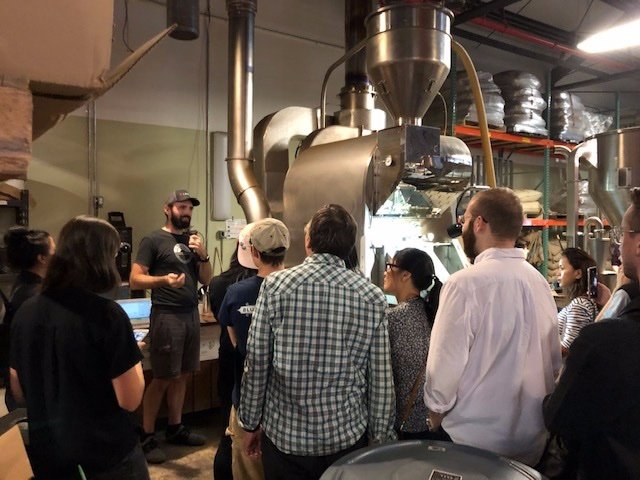 Rob also confirmed that heat and airflow on a Loring are inexorably linked. To get more heat, you also get more air. They cannot be decoupled. I feel I would be losing a valuable roasting variable, since I've been playing with more and less air while maintaining the same profile and finding a noticeable difference in the coffee.

He then gave a great talk on the Science off Coffee Roasting. The takeaway was distilled in this graphic, but there were a lot of questions that filled in a lot of blanks. It was a great session. 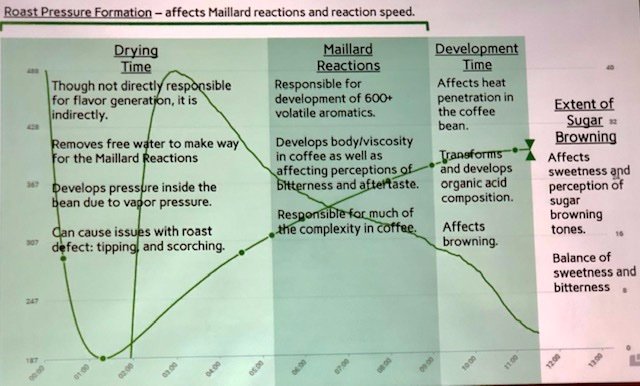 The background curve was typical of those presented. The post TP spike, followed by the pre-dry sag, coupled with the pre-1C plateau. I asked if he ever attempted to mitigate the sag, but was given the "blame it on the temp probe" answer again...and again. He had a graphic on his phone that showed 3 different curves from 3 different probes placed within cms of each other in a roaster. Yes, the difference was dramatic. And yes, I get the temp probe issue. To me, it's an issue that needs to be resolved up front in the roaster design or modification and not used as an excuse for bad curves.

I would buy the temp probe/roast curve argument if the coffee tasted superb. But that's where the train fell off the tracks this morning. Brooklyn Roasters let us grab a sample of the roast from earlier in the evening and I made a pour over this morning. It lacked sweetness and was a bit roasty. It was also a bit flat, like getting a jelly donut without jelly in it.

The weird thing is it smelled heavenly in the bag and after the grind. But it fell apart in the cup. I made a cup of my Sumatra along side it, which did not smell nearly as good (or as good as my old air roaster), but absolutely lit up the cup. I A/B'd them both for an hour while they cooled. The Loring coffee got roastier as it cooled, my coffee just got sweeter.

Yes, I realize I am tasting 2 different Sumatras, and I wish I had a few pounds of green from the coffee we roasted, but I'm certain I can replicate what I am getting in the cup rather easily with poor roasting technique. I know, I've done it before. My coffee used to taste like this. Good, but not outstanding.

This is the curve from my Sumatra: 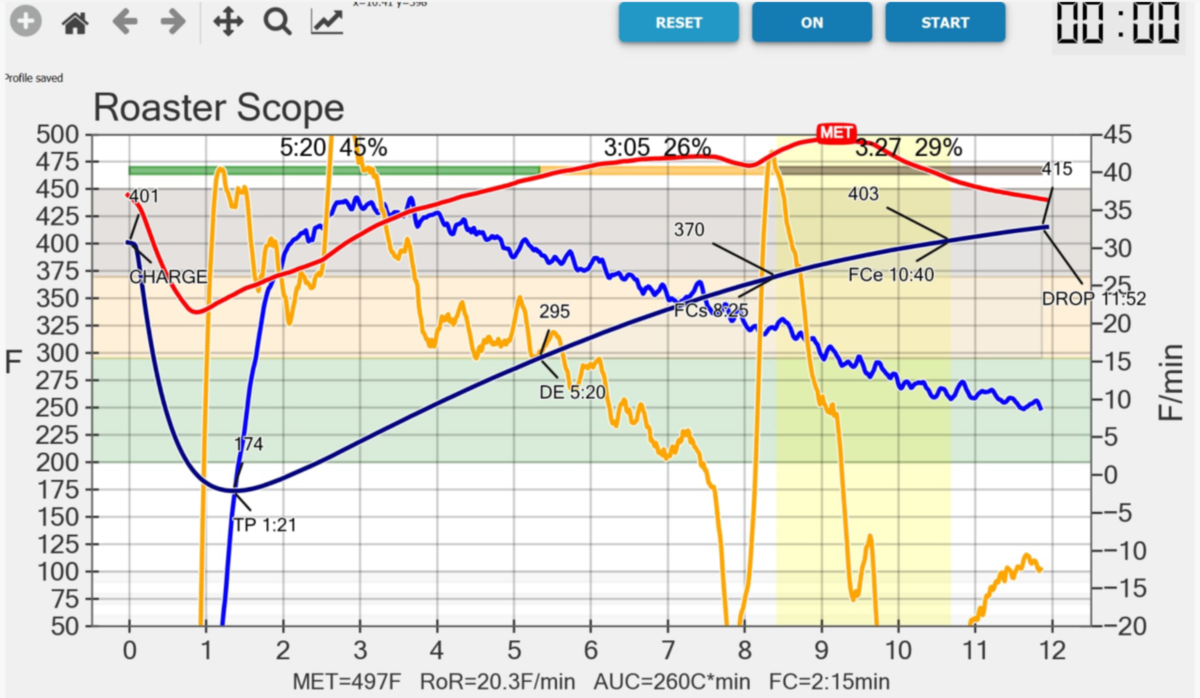 This is my crashy coffee from hell. I've finally managed a roast plan that removes the huge dip and the result is astounding. My employees and customers agree.

Rob might disagree with Scott's crash/flick axiom, but I'm guessing it's only because he hasn't spent enough time trying it, or it is hard to mitigate on a Loring because of the lack of useful RoR data. Once you learn to control your roaster to get an even, steadily declining RoR, it is impossible to argue with the result.

My takeaway, the Loring is an amazing machine. For mass production roasting, it is hard to argue its efficiency. But I'm still waiting to taste a Loring coffee that knocks my socks off. Sure, everyone's frame of reference is different, but once I tasted what a strictly controlled RoR can do for every coffee I've tried it with, there is no going back. For my small production needs, roasting only for my coffee shop and retail customers, I don't need efficient production nearly as much as I want to roast the best coffee I can. And I need flexibility to accomplish that and I need to be able to see and control the RoR during a roast.
Top
★★★ Very Helpful
← Back •
By accessing this site, you agree to the site's terms of service. If you need help with the site, please contact us.