Discuss roast levels and profiles for espresso, equipment for roasting coffee.
← Back to Roasting

So, I'm finally getting around to modifying my Quest M3s for Arduino/TC4 for use with Artisan. I've completed the box that houses the LCDaptor and TC4/Arduino along with the TC jacks,etc. I'll post some pics when I get the time. Anyhow, I'm currently working on the box that will attach to the roaster and contains the SSR's and ZCD.

My question... Since I will be controlling the roast using either Artisan on the laptop, or using the pots that connect to the SSR's, the pots on the Quest that control the fan and heater as well as the attached circuitry (triacs, resisters...) become useless. Also, the analog ammeter won't work as the signal from the SSR is pulsed. Therefore, my question... What if I simply remove the potentiometers as well as their connected jumbles of components, and the ammeter from the Quest. I can replace the ammeter with a digital ammeter and simply plug the holes left from the vacated pots. Will I be compromising anything other than the ability to manually control the roast from the Quest itself??

Your comments and insights are appreciated

While I don't have an M3, but judging from the M3 schematic, I wouldn't rip the old componentry out. I would leave the existing circuitry in place and back off the blower and heater knobs. Then tap the ZCD and SSR in parallel to the existing blower and heater triacs and completely drive the blower and heater duty electronically with TC4 and Artisan slider controls. Of course PID control via Artisan would be icing on the cake. When you power on the Arduino/TC4, the duty defaults to zero, so if you don't use Artisan you can always use the existing knobs to control the roaster manually - best of both worlds IMO.

Regarding the ammeter, yes its going to bounce around, but you can fool you friends into thinking your Quest is doubling as a geiger counter

I seriously considered running the SSR's in parallel to the Quest pots and then adding a DPDT switch to select which one to use. But I know that I would never touch the knobs on the Quest once I have the TC4 hooked in. On my Gene roaster, I also built an outboard box that housed an SSR and the pot to control the heater. I never touch the temp knob on that one either

I think that with the info that the LCD displays, it will be more convenient to operate the roaster (and with more accuracy) from the box. Incidentally, here are a couple of quick pics I snapped with an iphone. 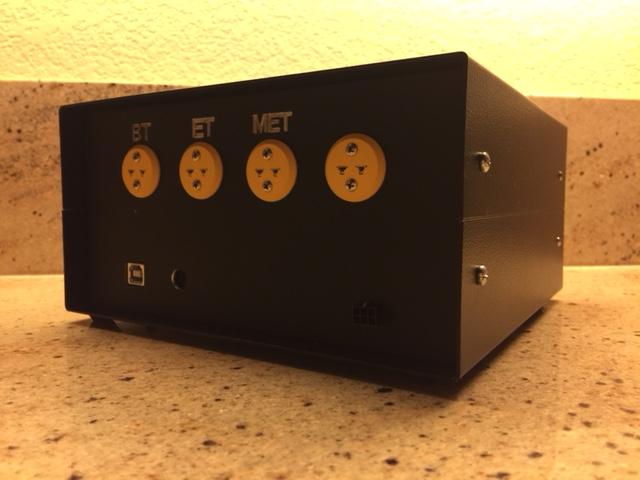 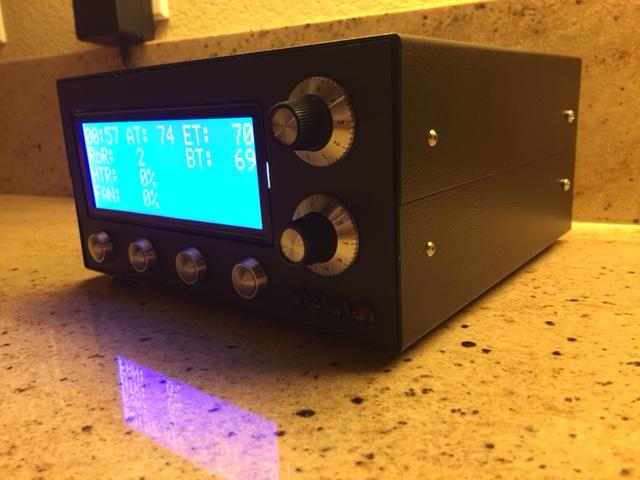 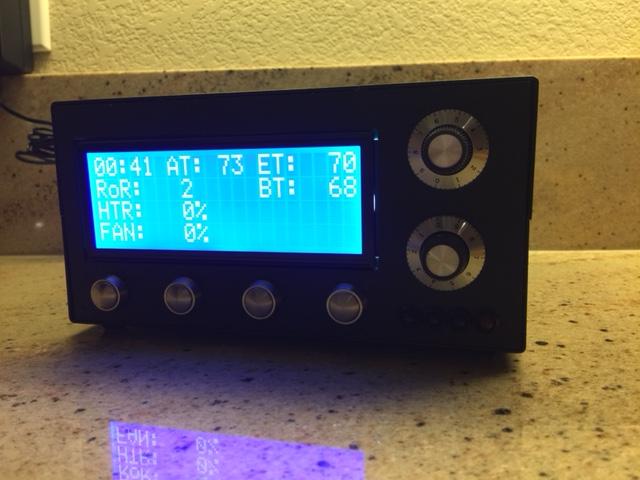 I tried to tweak the code to display MET on the screen instead of ET as I think that will be more useful. Unfortunately, I then lost a digit from the reading. Anyone know a quick fix??? I guess I have my homework cut out for me

ronncat wrote:...I also built an outboard box that housed an SSR and the pot to control the heater. I never touch the temp knob on that one either ...I think that with the info that the LCD displays, it will be more convenient to operate the roaster (and with more accuracy) from the box.

Having and outboard box with LCD and controls looks quite nifty. I was not sure about the level and sophistication of external modification to the you had in mind, especially for a separate digital control panel with knobs. Admittedly what I was recommending was totally in the opposite direction, basically a headless TC4 setup. For me, the last few releases of Artisan have changed everything regarding automated and digital roaster UI control. Add a Bluetooth adapter to your TC4 and your can drive your roaster through your notebook computer over the air, with slider controls, buttons, and all the metrics you desire for display, recording, and PID playback. I would try to put everything inside the existing chassis if possible, although It might be tight fit since you also need DC power adapter for the Arduino/TC4 boards. That way the Quest would look external unmodified, yet you could operate it manually as mentioned in the previous post or fire up your notebook and go full Minority Report.
07/11/1991, 08/21/2017, 04/08/2024, 08/12/2045
Top

I ended up gutting the potentiometers from the Quest roaster. Now I can control the heat and fan either through the outboard box, or from Artisan itself with buttons and sliders. I also removed the analog ammeter and replaced it with a digital one. Now I can determine the amount of wattage that is being fed to the heating elements.

I've played around a bit with the Arduino sketch to move the temperature readings around on the LCD screen. Having some trouble though making these work the way I want them in Artisan. Oh well... I'll just keep plugging along with it. 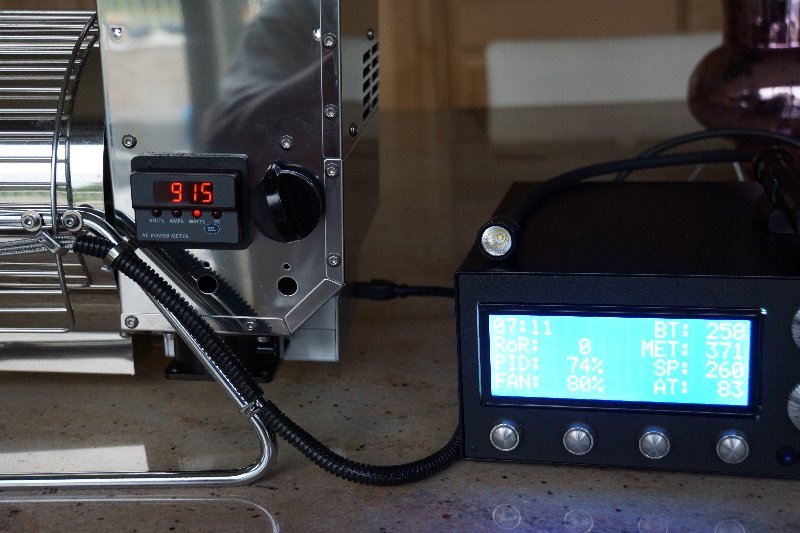 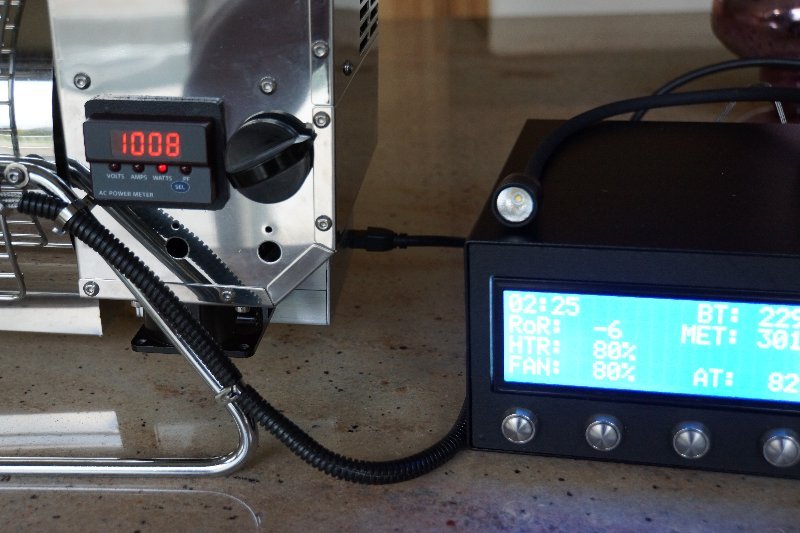 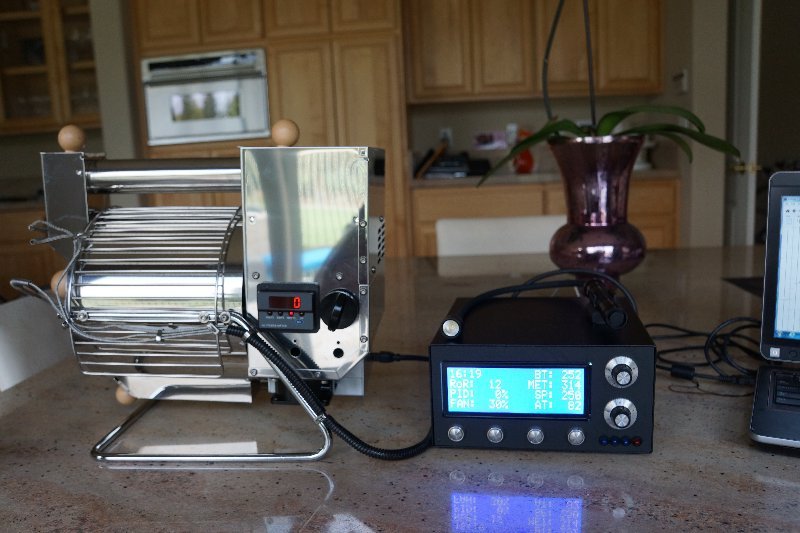 Looks great. Dumb question time. Is there something a TC4 board does besides zero crossing and ac-phase control? Just never really paid attention to it.

BTW, adafruit (probably others) has a lcd backpack board that gives an lcd I2C control (aka lot less wires) and (at least) 4 push buttons. Those work great for increase / decrease functions vs a pot.
Top

The TC4 also includes a PID. Too bad no one can buy it anymore.
Top

Ok, so pid software come with the board.
Top
← Back
By accessing this site, you agree to the site's terms of service. If you need help with the site, please contact us.