Drum Roasters - when do you change air; your theory? - Page 4

OldmatefromOZ wrote:This is by far the best coffee I have roasted to date, its sweet, full and rounded cup with no detectable roast defects. Makes my previous roasts seem weak and wispy, a bit undeveloped and baked.

If I had to guess, this result is from the fairly straight RoR curve on this last roast. On the two roasts posted earlier, one had a small crash/flick, the other had 8% DTR and might have been a little underdeveloped.

If I could make a recommendation, adjust your Artisan Config>Axes>∆Axis>Max setting to maybe 22*C. This will uncompress the RoR curve and show more detail. No reason not to have RoR displayed on the entire graph.


And for clarity: I used a constant airflow setting for the past year+ and was very happy with the results. My coffee was clean, dynamic, very sweet and free of roast defects. The air setting used was just enough to evacuate most of the chaff. It was about 20% below the setting that yielded max heat transfer. I could have been very happy leaving well enough alone.

But I'm finding that starving the system of air in the beginning of the roast has its benefits, but not without consequences. Maintaining a straight declining RoR is easier with steady air and not too much of it. Having lots of air blowing through a drum roaster makes controlling RoR harder.

Making air adjustments mid-roast also makes life harder with only marginal gains in the cup. Before I was able to use 3 roast profile templates for all my coffees. I had a city+ profile, a FC profile and a fast city profile used mainly for African coffees. Now, if I want to really nail the RoR slope, I need a separate profile for every coffee.*

The trick for me is achieving the same roast profile, with less initial airflow. This requires a bit more heat to push a roast through the turn and get it ramping up to the same degree as it did when I used more air. I'm finding I need 60-70% burner now where I used to use 50%.

So my intent of low air during dry might be different that MCR. Joe says its to prevent the outside of the bean from heating too fast before the inside has a chance to catch up. I do it to promote more conduction and less convection. The effect might be the same, but if I'm reaching DE in say 5 minutes either way, am I really slowing the transfer of heat? Regardless, I'm find less air in the beginning results in a softer, more nuanced cup.

Still two changes, one at DE and the other at FC. But the DE one is the most critical because of all the heat built up around the drum from limiting airflow in the beginning. The thin green trace is my incoming air temp. It is the air surrounding the drum that is being prevented from hitting the beans because the damper is closed. You can see how much potential heat is there when I open the damper and suck it into the drum. By the time the roast gets to FC, there is far less heat available.

The 50% setting is my old constant air setting. I could just leave it there. But since the incoming air temp is so low by this point, there is no harm in opening the damper up to draw as much smoke out of the roaster as possible. 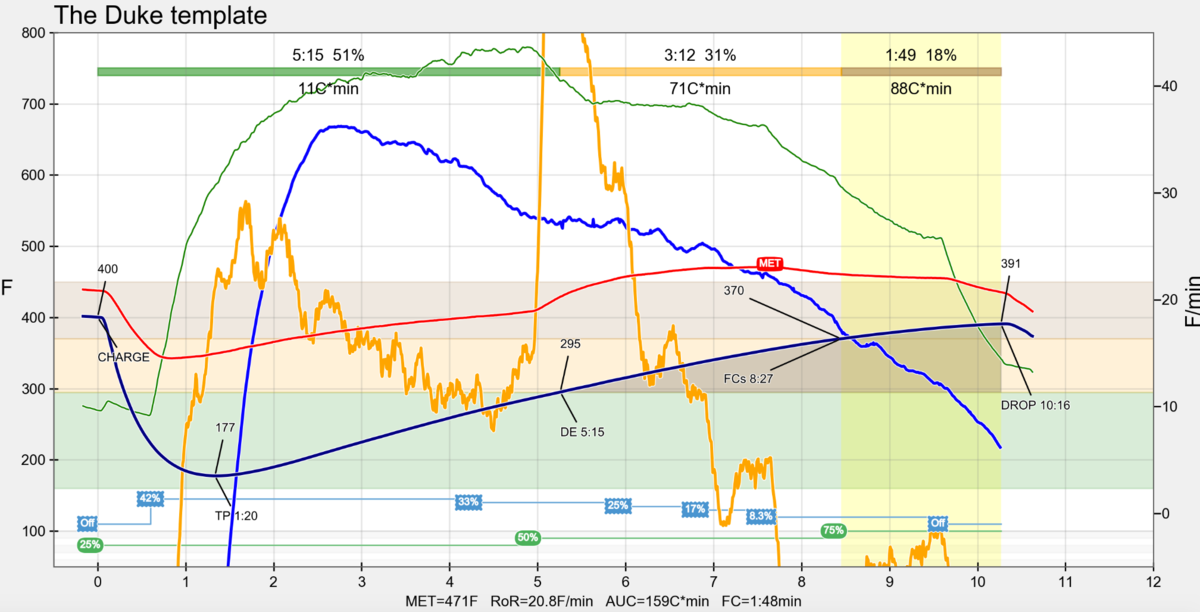 Alan, thank you, helpful so you are making the first at 15 sec prior to DE and the FC one right at FC? Same on all beans or you vary that a bit.

I started this thread to come of with a plan for experimentation and all of this is helpful. I had been using one setting just like you in the past.
CarefreeBuzzBuzz
___
Artisan Quick Start Guide
http://bit.ly/ArtisanQuickStart
Top

CarefreeBuzzBuzz wrote:Alan, thank you, helpful so you are making the first at 15 sec prior to DE and the FC one right at FC? Same on all beans or you vary that a bit.

I'm still figuring all this out. I'm trying to do a whole lot with a roaster that wasn't designed for any of it.

Like I mentioned, different coffees take heat differently. I try to minimize the spike in ∆ET as much as possible. I'm watching the BT RoR carefully because I don't want a big sag during dry. I can always bump the gas, but I prefer to have the initial gas setting right. This is where separate profiles for every coffee comes into play. The initial gas setting and the timing of when I turn on the gas before TP is critical, as is the charge temp and warmup procedure.

Once all that is in line, I make the first gas reduction a bit before the air adjustment to try and reduce the ∆ET kick. Most of the free water is gone by dry, so the added convective heat really pushes the roast through Maillard. Hence, all the subsequent gas adjustment. By FC I'm down to 10% gas, but that's because I have a big cast iron faceplate.
Top

Almico wrote:If I had to guess, this result is from the fairly straight RoR curve on this last roast. On the two roasts posted earlier, one had a small crash/flick, the other had 8% DTR and might have been a little underdeveloped.

If I could make a recommendation, adjust your Artisan Config>Axes>∆Axis>Max setting to maybe 22*C. This will uncompress the RoR curve and show more detail. No reason not to have RoR displayed on the entire graph.


Great, I will try changing that setting and thanks for taking the time to post the rest of your experience.
Top
← Back •
By accessing this site, you agree to the site's terms of service. If you need help with the site, please contact us.