That is a similar place to where mine was located, but I assume your drum spins CCW? 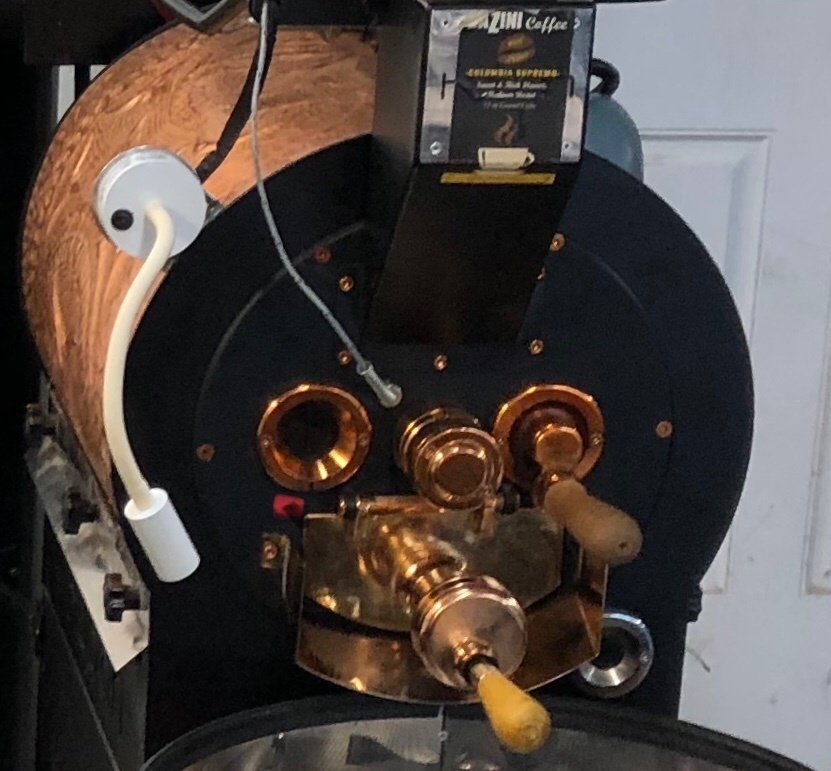 That was a very poor location for precise bean temp measurements. I relocated it to below the sightglass: 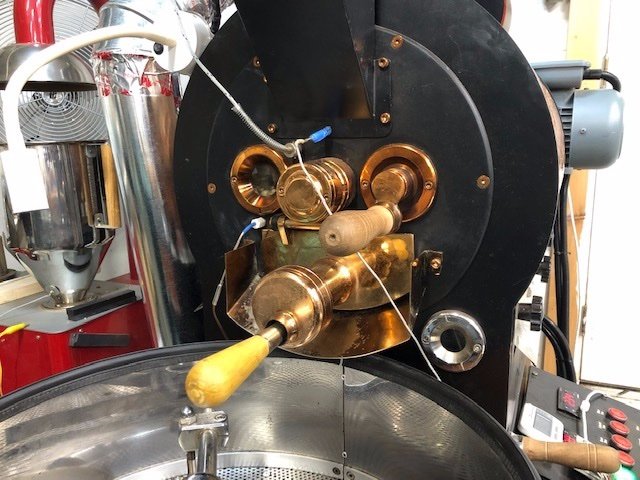 It's about 2cm from the drum wall. It's a 5kg roaster and I can easily roast 1# with good data. Last night I tried 1/2# for kicks and it seems that will work as well!
Top

TomC wrote:Very well written! It appears you've gotten a repeatable degree of control over your profiles, no easy task.

I ran one profile on this COE winning Colombian washed Geisha about 10 days ago and feel it's a tad undeveloped. There's likely more oomph left to be found. I purposely kept the post 1st crack development time to a minimum which is common for a light floral geisha. But I'll hit it again with a bit more heat up front and see what pans out.

The reason I mention it is we often dial in a profile based on bean morphology and traits like density, moisture content, previous experience, etc. But my preposition is that while one profile might be the best profile based on previous experience, or utilizing the above info, it is not always the case and might not yield the best cup. That's where experimentation comes in and breaking down some of the rules we generally follow. My previous experience has taught me that most geishas with their wider open seams and longer tapered shape require gentler heat and slightly more time, since very few would risk letting the beans develop much beyond the onset of first crack, lest they loose those delicate jasmine notes and other bright features in exchange for roast flavors, there's not a lot of segments to play with. You're not likely to just randomly add 2.5 minutes to your drying phase, etc.

So I think we're left with a belief that tells us to experiment more that we're used to. If one could shape a profile that defies norms and yet is still absent any roast defects (very important), then it should help us find the tastiest cup out of what we're roasting, rather than following someone else's suggestions of what to avoid.

This is what my Gesha roasts looked like before I was able to shed more heat via airlfow. I desperately wanted to get a nicely declining RoR to get in the ball park for nice jasmine and sweet fruit.

Here is what they look like now, with drastically improved flavor profile.

I am just beginning to experiment with other profiles as I couldn't really achieve anything other than the former image before increasing overall airflow. I think I will begin with elongating the roast a bit and keep development time similar with the Geshas.

Thank you for the input and discussion. I always look forward to your posts, and you were right on point with this one as per usual. Without control we are just flapping in the wind. Interestingly, I talked with Marshall Hance, and he said just about exactly what you did with this post. Thanks for the encouragement!
Top

Marcje wrote:I will follow this thread with great interest!

I have the same roaster and absolutely recognize your flat RoR / airflow adjustment statements. I typically charge 830grams at 190degC, leave the exhaust at 50% throughout the roast and switch off the heater right before FC. That way I get somewhat of a declining RoR without crashes. My roasts take approx. 14 mins.

Last week I tried two extremes in terms of airflow: 1) Start with a closed valve, then open up before FC vs. 2) Start with an open valve and the close before FC. I could not really taste the difference in the cup! This lead me to believe that I'd better use charge temp and bean mass to control the roast, rather than fiddling with the air valve.

What is your typical charge temperature and mass?
I would be very interested to see your SSR mod and some of your profiles.
Will post some of mine too

I am sorry it took so long to respond to this, life has been intense this week. Your approach is the best I could figure without an SSR to control partial heat. I have no idea what would happen with full open and then closed, I haven't done a roast close to that to know how the roaster would react.

You might try gradually opening the damper in small increments like I do, but if you are at full power I would get to fully open 4-7 minutes into the roast. Do you find RoR declines well when you open the damper? It would be interesting to compare your roaster performance empty with mine. I wonder if they installed different speed motors or otherwise altered airflow between roasters as they were producing the Toper E.

My SSR setup isn't much to see. Instead of the conductors going from the elements to the contactor it goes to the SSR, and then to the contactor. My SSR is controlled by 5VDC signal from Phidgets.

I charge between 226g and 1000g. Usually 226g or 454g. Aside from charge temp and charge mass correlating, the roasts end up mostly the same if turning point is the same temperature.

Almico wrote:With roasting, just like brewing coffee, it's important to learn to completely control the environment before expecting anything good to come from it. Only then can you start working on profiling coffee for maximum results. Sure, you might get lucky, but the odds of repeating luck are not good.

I'm still learning to control my roaster, but I'm getting there.

I was finding that although I was preventing a crash, the RoR was still sloping downward too quickly for darker roasts. The natural profile curve of my roaster was concave, losing too much heat momentum during the dry phase. To correct this I designed this profile the other day with a more convex curve in an attempt to be able to hit 2C and 415* before my RoR dropped too much.

Using that curve as my background template, I needed to start with low heat and slowly add through dry in order to get my RoR curve to conform.

But the RoR still dropped to low to reach a good 2C so I tried again. This coffee is a straight Brazil and RoR tends to increase at 1C instead of drop. The hump is during the +/-45s no touch zone, but I still managed the roast fairly well. Next time the 17% adjustment at TP needs to be 25% and that 12.5% adjustment before 1C needs to be 8.3%. This one did hit 2C and 417* in 12:22. You can see all my heat adjustments below. The air was never touched.

To help reconcile the numbers, it should be noted that the first roast is 8# and the last one is 6.

I just want to acknowledge that this is a good post, and not pertinent to the roaster in the title of the thread. Control of the profile is great, and if you have a roaster where you don't need any airflow to achieve it that's great. The Toper E absolutely cannot replicate those curves without more airflow than the roaster has from the factory, even with an SSR to control heat. The factory ships the roaster with just a contactor, it's full heat or zero heat. As much as I would like to be able to achieve those style curves without higher airflow, there is too much thermal mass and too little airflow in the roaster to do so, even empty.

Rob Hoos claims that airflow has little impact on the flavor of roasted coffee and that time from milestone to milestone is all that modulates the flavor profile (paraphrase). Could those of you that are low airflow advocates address his claims? I am not making a claim to either side, but I am genuinely interested in hearing your thoughts on airflow.
Top

hankua wrote:There is a way to get a better handle on the airflow; install a used Dwyer Magnehelic tubed into the plenum. If you have the traditional style damper flapper I think you'll find this very useful. Electric drum roasters don't work the same as gas machines due to the response lag with heat changes. If you get the air pressure gauge installed, you'll be able to narrow down more settings that are repeatable for your machine. I've done the entire mod including drill/tap, gauge, fittings, tubing for less than $50.

This would definitely help with adjustments relative to other roasts on the same roaster, but does nothing to compare airflow between roasters. Unless the fans are changing performance curves, which I doubt, then the same settings for the damper/fans do not have a repeatability problem, right?

How did you find that getting a more accurate idea of airflow from roast to roast on your roaster helped with your roasting? I am sure there is some interesting data to be had, but without doing it myself I am not sure what I would be looking for. Thanks for the input!
Top

Marcje wrote:Are the Artisan graphs here from elictrical Toper Cafeminos?
Reason why I'm asking is that I think I understand the generic priniciples to produce a roast (say witha a declining RoR), but I cannot replicate such a declining RoR curve myself. Mine stays very flat. And the coffee actually tastes ok.
I suspect that maybe because of the cafeminos design?

@Rush: Maybe you have some?

Here is a normal Cafemino E roast profile. Most curve afficionados would not approve:

We have to fight to get a declining curve at all, it just wants to stay flat, and then crash after FC.
Top

Here is another good one. In order to shorten the roast the only option is to charge with more momentum, but this is the result. It just results in underdeveloped coffee.