Confused about BT during crack - Page 2

I have tried some of your suggestions. I have charged at a lower heat and and I have preheated the Quest more slowly to reduce the high ROR after TP. Immediately after charging, I increased the amps to prevent the rapid decrease in ROR that was visible early in my last roast (shown in the background). This appeared to work very well. When I reached dry end, I lowered the amps to prevent creating a plateau before FC, like my previous roast showed. I realised too late that my ROR was obviously decreasing too quickly and that the roast would stall before even reaching FC. As a result, I was forced to increase the amps and my profile became a mess after 6 minutes.

Am I right in thinking I should have increased the amps at charge even more and lower it 1.5min after DE, instead of at DE? I expect that would make the ROR decrease less rapidly so I still have sufficient momentum to decrease the amps without stalling the roast.
I would love to hear your suggestions.
Top

I don't know what your power settings were, and I've never used a Quest, but I think you are charging too hot and carrying that heat into TP and the beginning of the ramp. I don't like roasts to go beyond 45*/m F. It look like your is going much higher.

I would charge lower, with as little power as possible until right before TP and then turn up the heat to whatever degree gets you to DE in 5 minutes. You need to get familiar with this setting for a few roasts because you should not be turning the heat up and down and up again. The only place turning the heat up would be appropriate would be prior to DE. After that, you have to dance with who brung ya.

I'm currently fighting this on my Cormorant. I can get a nice curve on the first roast with the roaster pre-heated to 300*F. After that, it is too hot to get a reasonable TP and the roast starts too fast. If I slow it down, then I stall and there is not enough power to get a good ramp going again. At heat not with a 500g charge. It works fine with less beans. That is your next "quest"...to find the ideal charge amount that facilitates the curves you want to roast.
Top
★ Helpful

I have a modified M3 (not M3s) with a perforations around the back of the drum and a copper tube to direct input air to the middle of the roaster. The drum is painted black. So I can't say that profiles I use will work with your roaster, especially when it comes to the fan settings. But here's what I generally do:

2. I find with the Quest that fan speed makes a big difference in heat transfer. More fan, more heat. Some have commented that you can't set the fan speed too high on the Quest (i.e., higher speeds don't lower the temperature in the roaster, they usually increase it.) I use 30% fan speed during warmup and at charge. I'm giving that speed in percent because I have an Arduino/TC4 PID interface that lets me set it that way. I don't know how that would translate to your fan pot, but the speed is the point where the fan goes from barely turning (about 20% on my machine) to turning well but not vigorously.

3. Typically I keep the heat at whatever setting is required to maintain the charge temp until the TP is reached (or 30-45 seconds after charge), then increase heat to the max I've decided for the roast -- often about 500F, though I'm in the process of experimenting with a lower max to slow the early part of the roast. In fact, I might just leave the heat alone until I need to lower it before FC (see below.)

4. When RoR hits peak, I boost fan speed to 40%. This keeps the RoR from declining too steeply before DE.

5. About a minute before DE I boost fan speed to 50% and leave it there until just before drop.

7. I keep track of the time between DE (about 300F) and "Brown" (about 330F). At least one professional roaster has commented that 90 seconds is the sweet spot for this interval. I usually get about 60-75 seconds, so I'm hoping the lower max for MET will extend the interval a little.

8. About 60-90 seconds before FC I lower the heat. Sometimes I do one large reduction and other times I try to ramp it down gradually. Still working on that. In any event, this is necessary to keep RoR from flicking up during FC. The trick is to lower the heat enough to do this without causing RoR to crash, which basically means your BT is stalling and the beans are baking.

9. About 15 seconds or so before drop I push fan speed to max to clear out the rest of the chaff. Honestly, this step may not be necessary. I rarely see appreciable amounts of chaff on the beans with the fan speed at 50%.

Hope this helps. All roasters are different, even the same brand and model from one installation to another, so YMMV. But maybe you can try some of these things and get a better roast.
Top

Peppersass wrote:1. I don't think your charge temp is too high. For most beans I charge between 340F and 370F.

30*C/min converts to 54*F/Min. That is too hot too fast for most coffees and profiles.
Top

I also own a Quest M3s and I often (always) have ROR that peak at this level.

I guess it just depends on the probes you are using. My TP are always happening at around 130F 30-45s into the roast which is faster than most of the other roaster. Hence the higher ROR peak.

I think Rao already said that the data in the first 2 minutes isn't that useful and I have to agree with him on that one.
Top

Bunkmil wrote:I think Rao already said that the data in the first 2 minutes isn't that useful and I have to agree with him on that one.

Yes, but he's not talking about Quests and certainly not roasters with 38s TP times.
Top

Bunkmil wrote:I also own a Quest M3s and I often (always) have ROR that peak at this level.

Ditto with my Quest M3. I haven't gone back and looked at all my profiles, but my recollection is that RoR always peaks somewhere in the 45F-55F range, with time to DE ranging from 3-5 minutes or more. The RoR peak doesn't appear to correlate closely with speed of the roast.

With vast differences in roaster design, probe types and positions, I don't think you can generalize something like peak RoR from one roaster to another. Let's remember that we're not really measuring the actual bean temperature, but some combination of ET and the surface temperature of beans that intermittently hit the probes.

Although I use computer monitoring to try to understand what's happening in my roaster, those measurements are relative. I've often though the only absolute profile parameters that one roaster can really compare with another are color, expansion, smell and sound -- i.e., analog stuff.
Top

I have alot more success controlling the ROR for my Huky with multiple timed heat adjustments to mimic and more gradual temperature change within the drum. Example would be, gas at max 100% 2.5 KPA, 2.5KPA after 30 sec soak, 1st adjustment 2.2 KPA @ 120c, DE, 2.0 KPA, every thirty seconds cutting 0.2 KPA, until nearing 1fc, 45 second before and after 1fc no adjustments. I am usually around 1KPA before 1fc, depending on bean type, some beans would require a small boost in power to mantain the ROR.
Top

Almico wrote:Yes, but he's not talking about Quests and certainly not roasters with 38s TP times.

I don't what to say but it's always been like that on my Quest. Why would TP be more relevant on a Quest than on other roasters?

Here's a post from Rao on that topic : https://www.instagram.com/p/BhWvZNgB9LA ... t0erww6sn8
Top
★ Helpful

It's not, but what Scott refers to when he says "the first 2 minutes of data are not useful", he is talking about commercial roasters where the TP typically occurs around 1:20-1:30. So "the first 2 minutes includes the TP plus tiny bit after. If you TP is occurring at 30s, then the first 1 minute is not useful. By the time the BT has climbed 1/4 to 1/3 of the way to dry, the data is reliable under normal circumstances.

High initial RoR temps appear to produce divots in darker roasts. I also find the sag from a high initial RoR spike does not do my roasts any favors. Once I learned how to get a nice downturn and straight declining RoR, my coffee improved exponentially. 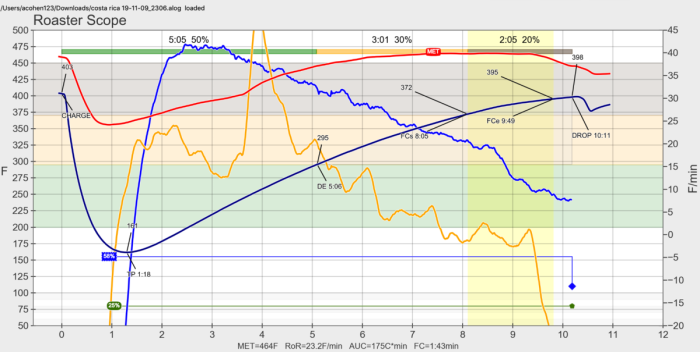 Top
★ Helpful
← Back •
By accessing this site, you agree to the site's terms of service. If you need help with the site, please contact us.