Continued from over on the Loring thread, I want to try and see the effect, to the best of my conventional drum roaster's ability, that shifting the conduction/convection ratio would have on my coffee.

The roaster: it's a 2017 Turkish 5kg roaster without drum or air speed control. Drum speed is 62RPM. I have tweaked the propane delivery system to provide a bit over 80KBTUs so I can roast a full 5kg in 10 minutes as well added a very sensitive Parker control valve. I've reworked the themometry set up to where I can roast down to 500g (10% capacity) and still get very reliable and accurate data for Artisan. My air control is only an exhaust damper with 5 detents which I have labeled 0, 25, 50, 75 and 100%. I'm fairly positive the values are not actual. I would add a magnahelic, but I might be replacing the roaster before I get to that.

The cooling system is a weak link and might need to be upgraded. It takes 4-5 minutes to cool 8# of coffee to room temperature. I'll be conducting additional experiments on the effects of cooling time on coffee flavor. I can use my Cormorant cooling bin to cool 200g to room temp in under a minute. I would like to know what my coffee would taste like at 1:00, 2:00, 3:00 and 4:00 cooling times.

For the past several months, and under the advice of council, I have been leaving the air alone during my roasts. I estimated that max heat transfer occurs between 50 and 75% damper, but I get less chaff at 75% so that is where I have been roasting.

Recently I started roasting at 50% to DE, 100% to 340*, 50% to 1C and 100% to finish without a significant impact on the coffee profile. BT RoRs have still had a nice downward track. I have not done serious A/B cuppings to see the effect on flavor.

Disclaimer: I consider myself a student of coffee and especially coffee roasting. I am an expert in nothing. I try something new, test it, have my employees and customers try it and if it works, use it...until it plateaus and the next learning phase begins.
Top

I did the first experimental roast this morning. I expected a disaster which would have stopped this experiment in its tracks, but that's not what happened.

The coffee is a fairly inexpensive Colombia microlot that I have been using in my house blend. I have never roasted as an SO, but now I will have to.

I roasted 4# and this is the profile. I neglected to input the first heat adjustment. It was 25% at about 1:00, just before TP. I not only closed the damper, but turned off the exhaust fan at charge. I turned on the fan at 2:30 while leaving the damper closed to see the effect. There is a clear rise in ET, but not much change in BT. Interesting to note that the BT still climbed nicely, even though the ET did not before the fan went on. 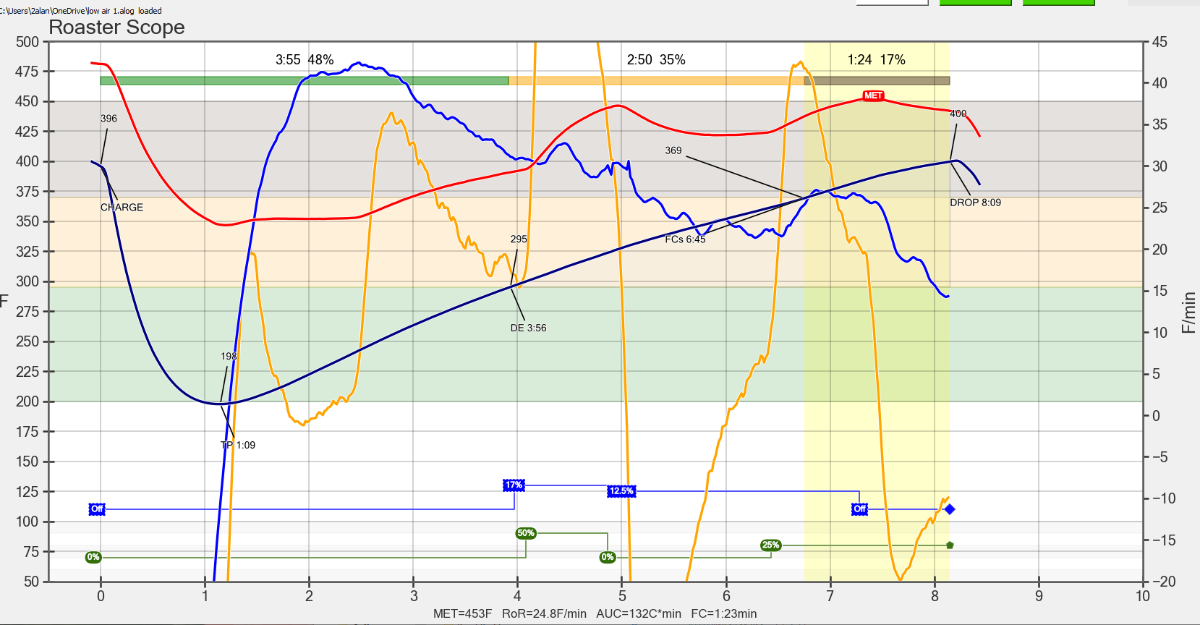 Yes, it's pretty ugly. But I'm sitting with a cup now, 10 minutes off the roast, and it is really pretty good.

The process:
Plenty of power to drive BT without airflow. Too much.
Next roast charge at 375. Same heat setting.
Big heat jump when I opened the damper at DE. Next roast, reduce heat prior to minimize ET spike.
I closed the air to 0 shortly after and left it closed until smoke emanated from the hopper before 1C. I opened damper to 25% to exhaust it.
Big temp spike. Unclear if that is the bean temp, or the probe is picking up the hot air around them. Need to reduce heat even more around 350* to prepare for smoke exhaust.
Dropped at 400* where I would normally drop this coffee.

Results:
Moisture loss 14.25%
More chaff in cooling bin and coffee.
Agtron 65/73 Unexpectedly developed given low air and 1:24 post 1C drop.
Batch appears med-light, milk chocolaty color, very even roast. Also unexpected.
Fragrance off the roast was malty, vanilla and sweet. Surprisingly much less smokey than my usual roasts. Can't figure that one out I will have to do another control roast with my usual roast plan.

The smell off the roast alone tells me there is something here to pursue. It will be interesting to see if the coffee gets sweeter when the pre-1C damper opening gets tamed. 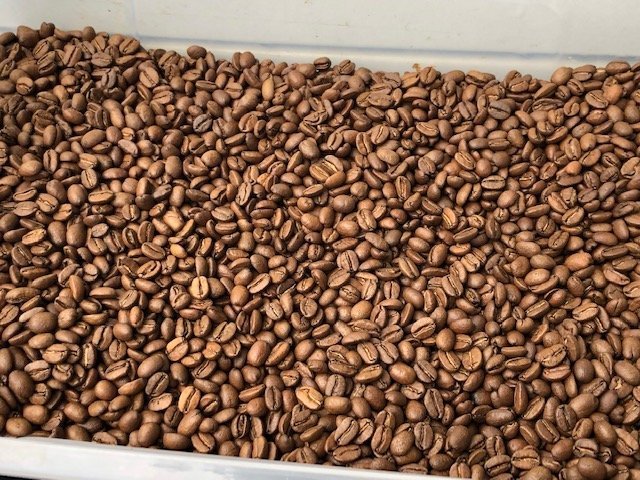 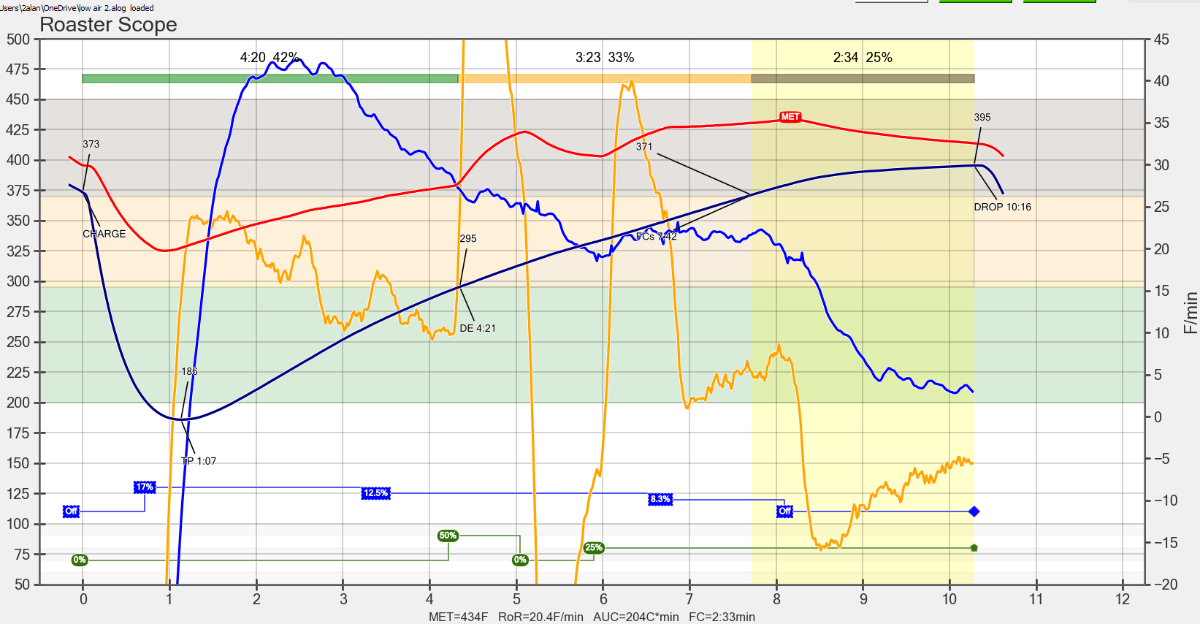 I tried to get it to 400* to eliminate one more variable, but it wasn't going to make it. Agtron 62/68 is darker despite lower drop temp.

Can't really start serious cupping until I get the RoR more in line: 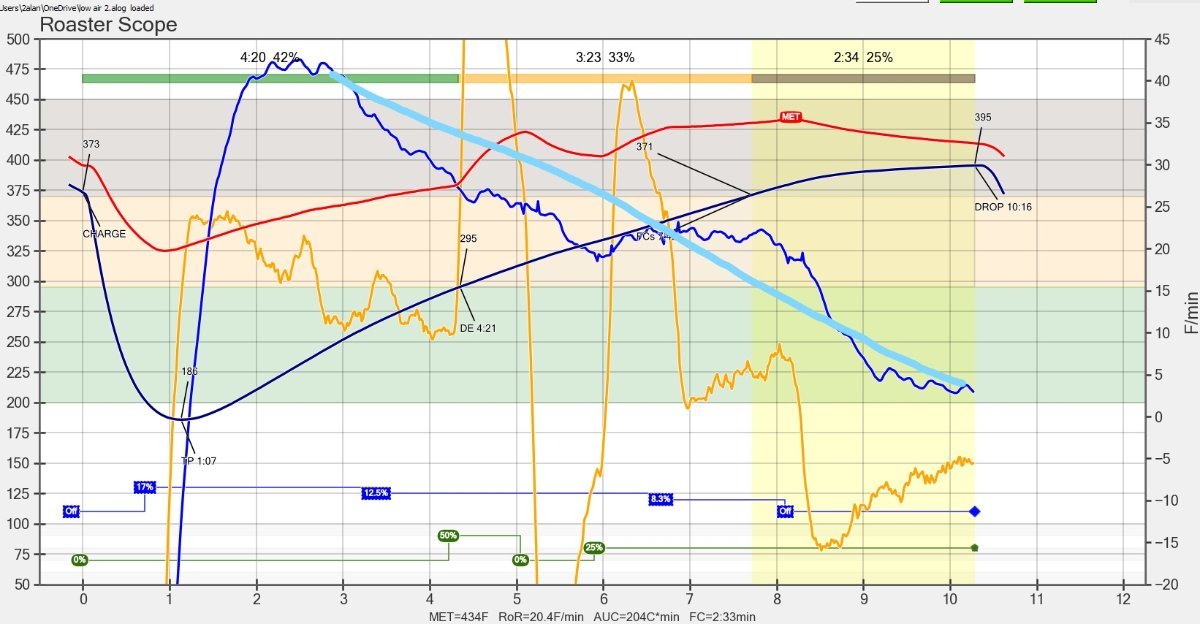 Drop temp is good. Need more ramp heat.
Had the fan on the whole time, even though damper was closed.
Back to 25% heat in the beginning next time.
Depending on the effect of more ramp heat, might have to just shut the heat off at or before 1C.
Top 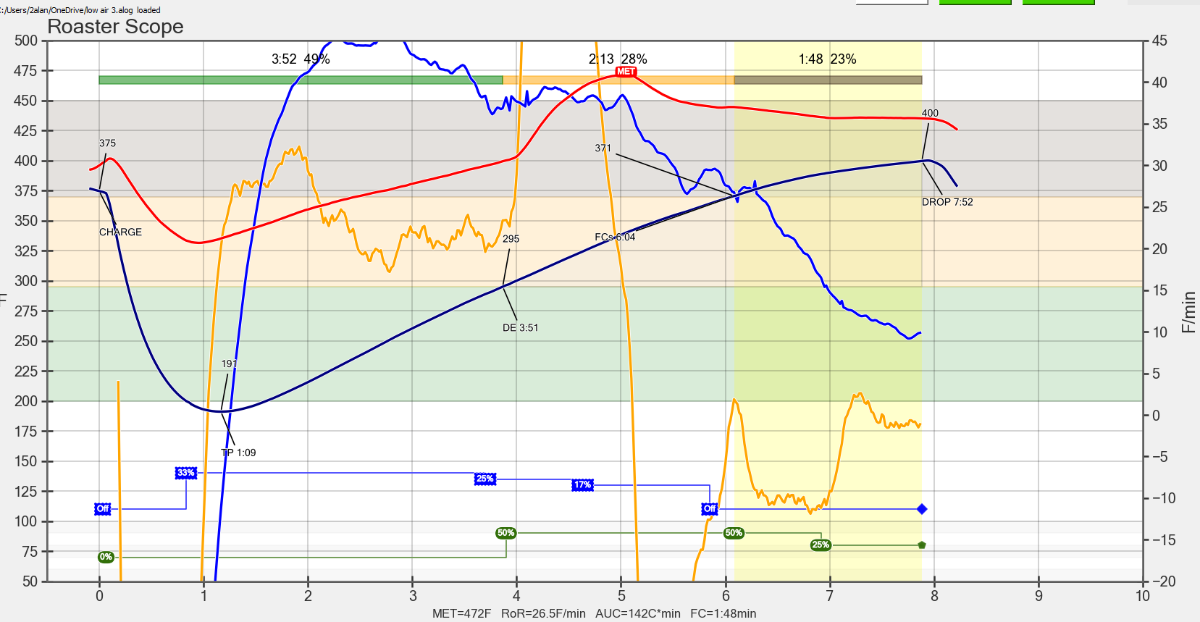 #4: Getting there. I think I can improve it by keeping damper to 25%, not 50. None of these roasts are smokey. Might be a different story with dark roasts, but not these medium/light roasts. 15.1% moisture loss, 62/70 Agtron. 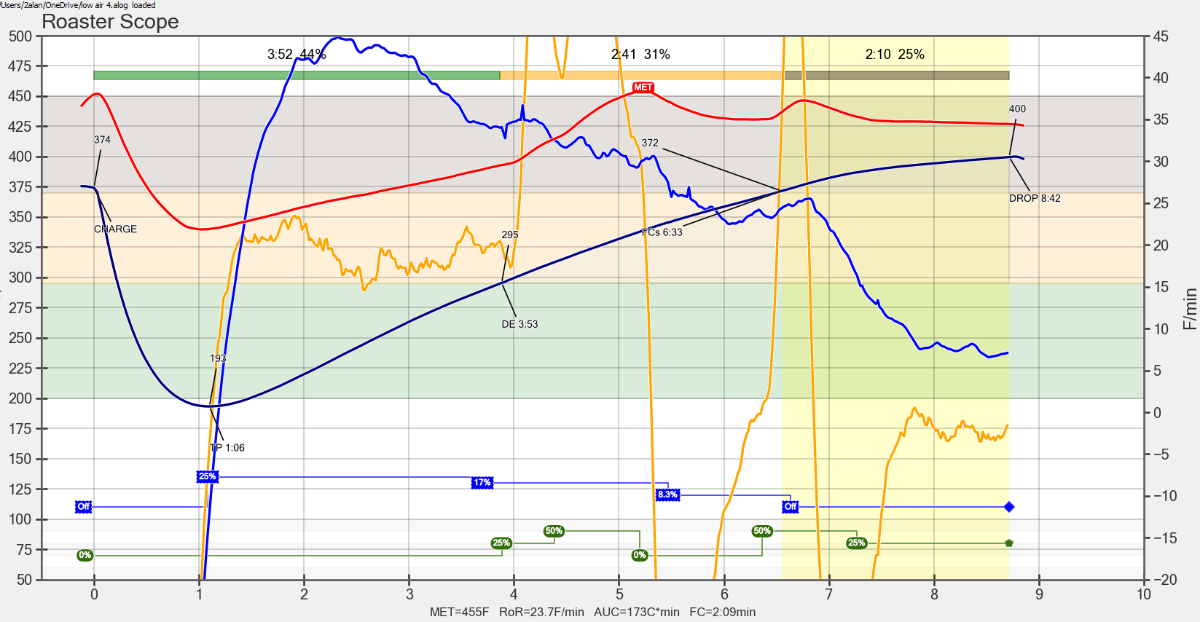 Interesting bunch of tests Al. I struggled a bit with what you were doing with air and gas (your green and blue traces are not marked). But now see you have damper closed at beginning of roast. Then you open damper later in roast.

I can only relate this with my North 1K, which has a variable fan. If I completely shut off my fan, my burner starts to go out due to lack of oxygen and I can only guess bad CO is coming out at me. So 0% air with my roaster is really not much air at all and I cannot roast with it at this setting. But I can get the air very low and monitor it with a magnehelic. 0.1" wc I call 100% air and 0.02"wc is the lowest I can use for roasting. I have no idea how that equates to actual air flow. Interesting, when I leave my bean chute open, I get airflow. My magnehelic, due to tapping air at chute and perhaps picking up turbulence, reads decent pressure (falsely). And I first notice the issue when my RoR is slower than it should be.

I find it pretty interesting your getting as much heat to the beans as you are with 0% damper. I'm pretty sure that won't happen with my roaster. 0.02"wc would result in much lower heat to beans than with say 0.04"wc. Now I'm inspired to run some tests!
Top

So, it seems I was mistaken. My ET (which is a probe in bean chute measuring exhaust air) is first to show than my chute was left open.
Below is identical roasts but one with bean chute left open for the first 3.5min. The result did have slight effect on heating beans (less with bean chute open) and a jump in heating when I closed the chute at 3.5min. Unfortunately, both these roasts were done a year ago and I did not have my IR measuring drum temps at that date. 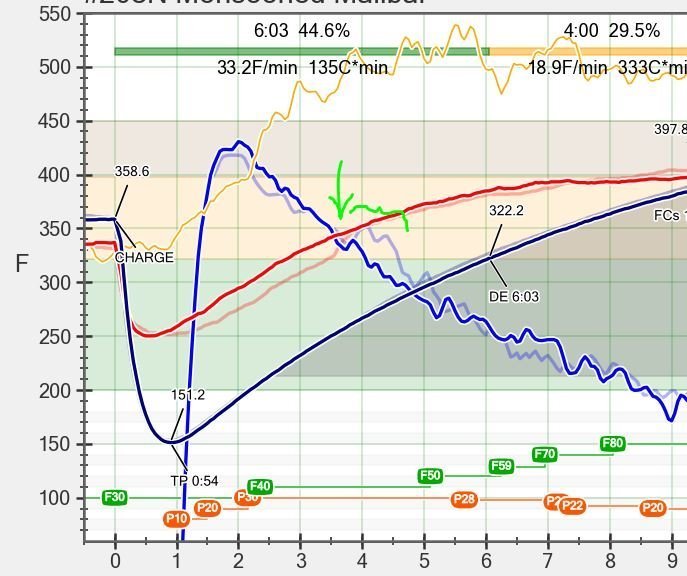 Note: yellow trace is a MET probe measuring inlet air temps at back of drum. Green is my fan setting (50=0.05"wc on Magnehelic) and Orange is gas burner pressure (20=2Kpa).
Top

Below is a recent roast with IR drum temp. The IR sensor looks at the outside of the drum (drum painted black with measured emissivity of 0.96) and Wall temperature is the temperature measured with thermocouple behind the IR sensed spot which is used to correct the IR temps.
My drum is a solid SS drum and the sensor is such that the drum rotated >270degrees from flames and about to go back into the flame (I'm thinking the temp at this spot is more stable, perhaps cooled slightly, from a spot just after the flame). Note: my drum rpm is about 65.

The data is interesting. Notice how MET follows the drum temps at beginning and drops far below during development. In fact, the inlet air and exhaust air is below BT at end of roast. So I think the only thing warming the beans at this point is the drum.
Top

If you are using a Magnahelic or a true "U" tube manometer and are measuring into a moving air stream instead of static pressure you should be using pitot tube probes instead of a tube stuck into the duct.
Top

Yeah, my magnehelic is simply plumbed into the analog temperature piping. I would like to make the mod I think you are suggesting where the tube is brought into the middle of the air stream facing the direction of air flow. That way, I get no "wall turbulent" effects.
Top

Yes, the pitot tube has a dynamic port and a static port and will provide accurate flow indication without a bunch of hate and discontent. Surplus pitot tubes are cheap all you have to know is what the max air flow might be and a trip to the ASRAE books at the local library has nice charts and graphs that will allow coming up with that value then there are more simple formula to convert the Magnehelic reading to flow in standard cubic foot/min at some temperature. Air duct flow is a big issue in ventilation and has been reduced to easy to understand info in those 2 books. It is online but if you do not know where and what to look for it is near useless, need paper books.
Top
← Back •
By accessing this site, you agree to the site's terms of service. If you need help with the site, please contact us.