Almico wrote: There is some programming of the VFD involved and my brain is feeling a bit maxed lately. I'm afraid if I try and stuff anything more in there, it might crash.

Hmmm. The extra smoke from these experiments is reducing the absorption of caffeine?

Caffeine: Neurobiological and Psychiatric Implications
Scraping away (slowly) at the tyranny of biases and dogma.
Top

Still playing with less air. Using no air leads to an unbearably hot roaster. My roaster is just not designed to do this. 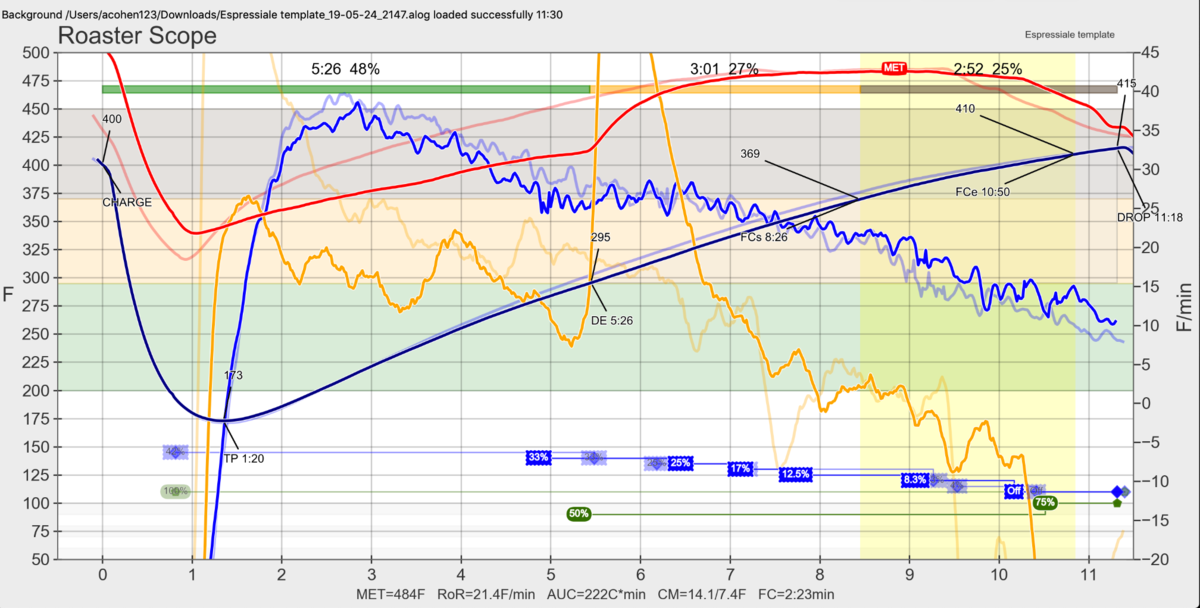 Interestingly, the ET is considerably lower, yet the BT ramp is similar to the background guide roast. Obviously, I do not need all that ET in order to get the BT to climb. It appears the beans are only going to absorb the heat so fast.

It looses a little steam about 2/3 through dry. I lower the heat before opening the damper to 50% to purge some of the reserve heat from under the drum. As soon as I open the air, the ET rises to the background roast.

I left the air at 50% and controlled the RoR with the gas, only opening the air at the end, after the burner is turned off, to evacuate smoke.

This is a Brazil/Colombia blend that I am serving this morning at the bar. Chocolaty sweet, heavy body with a hint of allspice. Nice!
Top

I ran a few test roasts over the weekend. All a older Myanmar bean. The tests were with three different airflows.
The lowest read 0.03"wc on the Magnehelic and I consider the lowest air and still pull the flame exhaust out. The second is a more normal airflow of 0.05"wc, which I've typically used on many quality roasts. Then, the final roast was with 0.08"wc. With this higher airflow full gas had trouble maintaining the RoR during ramp. My max fan is still considerably higher than at 0.15"wc, but this is way too high to roast with.

All roasts I charged 32oz at 370F BT. But notice the first (0.05" baseline drum temp was hotter since outside drum temps were cooler).
The bean was a rather old Myanmar bean I got for nothing. The slow air and fast air roasts, I smoothly adjusted gas such that the profile for all was matched (best I could do). Beware, my MET (inlet air) is not reliable and must pick up a lot of hot/cool air turbulent. My BT Phidget has an issue with being steppy and so my RoR is a bit noisy.

The three roasts matched pretty well. All ended within a 15 second window and within 2 degrees. My ET and RoR closely matched as well. 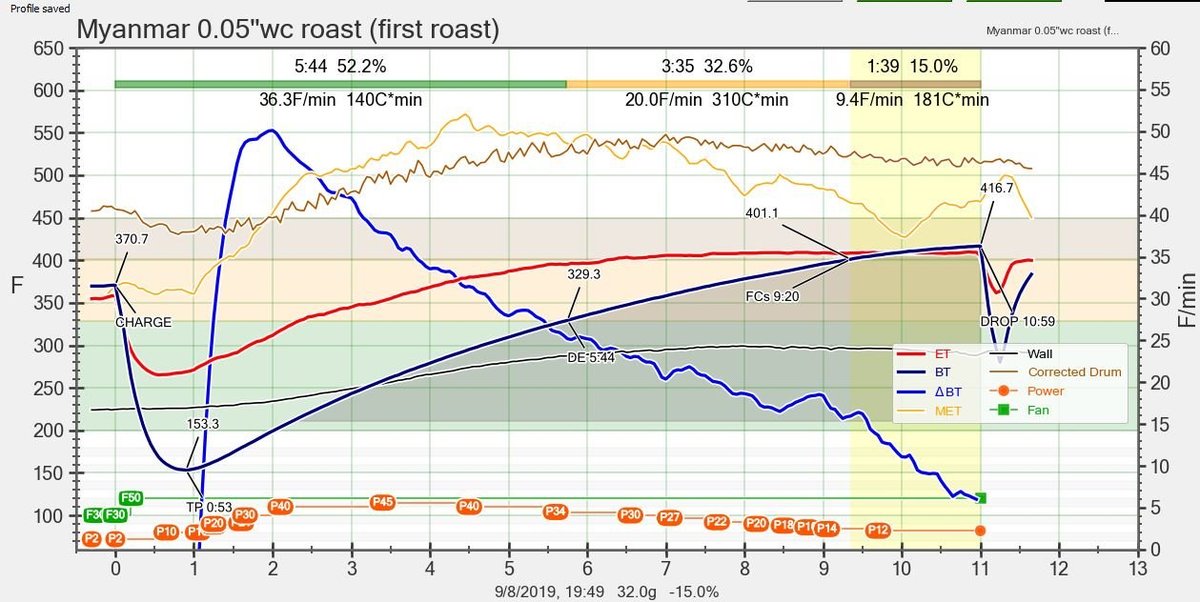 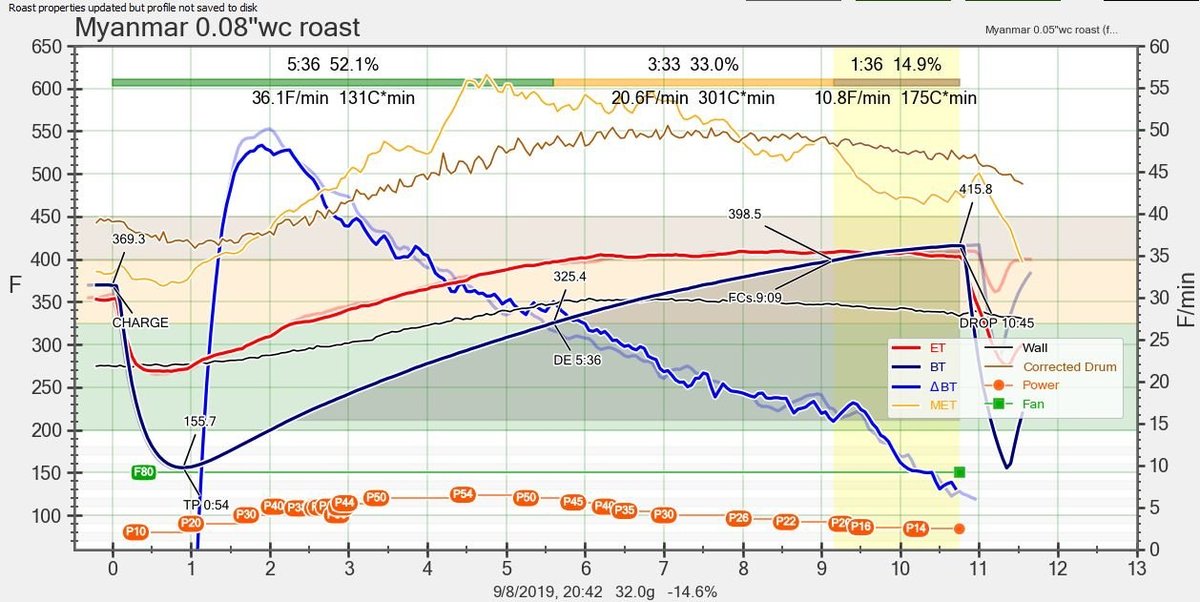 My conclusions are that I cannot change drum temperatures very much with airflow for a set profile. Other observations are that my inlet air temperature (MET) with low airflow hit record high numbers even though gas used throughout roast was lowest. Highest airflow did not reduce MET all that much relative to baseline. Also interesting is my ET (exhaust temp) seems to want to match between roasts in order to have matching BT (regardless of airflow). The gas required for fast air roast was max and I had to completely shut off the gas with low air roast during development.

I'm not sure what all this means other than I need to find another way to reduce my drum temp (air and gas don't work). I do have a few more knobs. Namely my drum RPM (which was set to 63rpm) can be bumped to 72 or dropped to 50. Then, I can change my charge weight. Would a half load act similarly? I'm wishing my roaster had an adjustable burner height.

Al, I think your low air roast must be lower airflow than the one I did with 0.03"wc. I did not change my air during roasts, so maybe I too would see jumps in ET.
Top 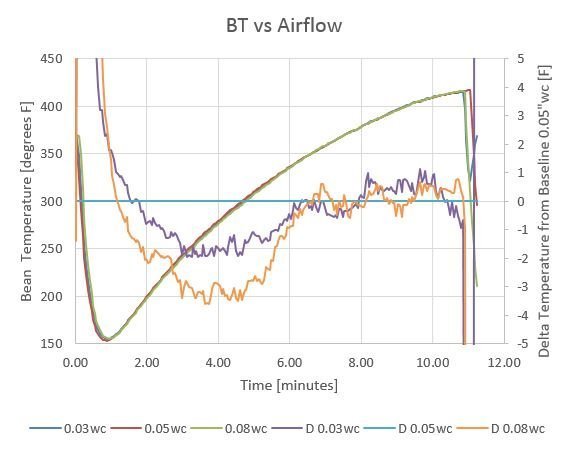 The plot above is all three roasts (from my last post). I also included a delta from baseline plots which shows my low airflow and high airflow roasts for the first 5min was a bit lower temperature than the baseline. Some of this was likely due to them being second and third roasts and the drum starting temp was lower. But I recall having a little trouble keeping the gas high enough for high airflow roast. But all roasts were within 1 degree from 6min to the end of the roasts. 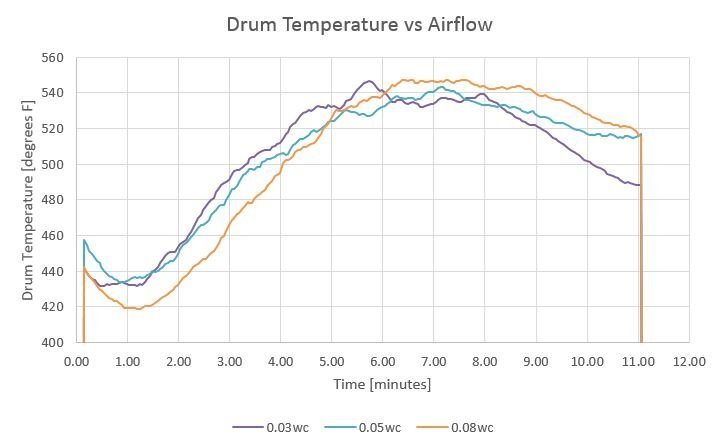 The drum temperature for the first 5min confirms my struggles with keeping gas high enough and hence the lower drum temp. What is interesting is there does seem to be a trend during development. The lower airflow roast does seem to have a lower drum temperature and high airflow has highest drum temperature. After looking at this a while, I think this correlates pretty well with gas settings. More gas and my drum gets hotter. The low airflow roast had the gas almost off during development and the drum temps are dropping quickly. 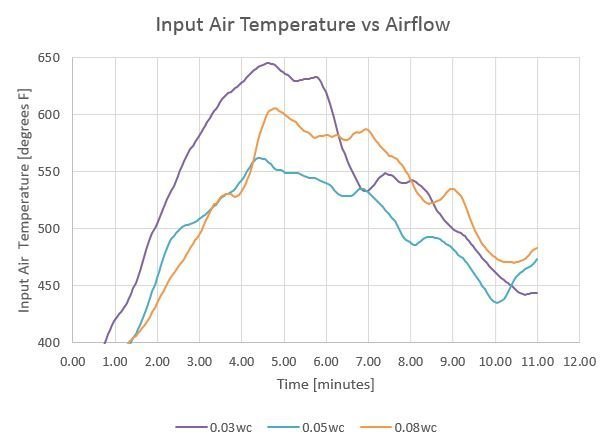 This MET or input air temperature is very hard to draw conclusions from unless you know what I was doing with gas settings. Even then, it is very had to know what level of convection is going on. But the trend really is that MET skyrockets with relatively little gas for low air roast and stays quite low with high gas on high airflow roast.

All this makes me want to try a roast with high airflow for the first 4-5min followed by low airflow during the rest. This should cause air and drum temps to be at the lowest throughout the roast. This is quite the opposite to what I normally do when I roast. To date, all my roasting used low airflow early and high airflow late. Hmmm . . .

Now. For what does this mean for taste? I pulled espressos for the past three days with the high and low airflow roasts and cupped this morning (all three). The first day, I was shocked that the high airflow espresso was very muted and musty flavored compared with the juicy low airflow espresso. The result was so noticeable that I thought I had a bad bean in the high airflow espresso. The next day (yesterday), I repeated the exercise and this time both espressos were much closer. But, I still could detect a slightly improved acidity with the low airflow roast. Todays cupping of all three resulted similarly. I could barely detect a difference between the three, but the winning flavorwise was the low airflow beans. So, without something more drastic than airflow mods, my roasts will likely marginally improve. I'm looking for ideas to drop the drum temps even more.
Top

I believe the next step is understanding the magnification/amplification or rather the 'focusing of heat that' playing with the the two variables has a drastic effect of the bean. To put it simply they are both heat factors on the bean and apply heat to different parts of the bean (cell structure, cellular fluid) and since airflow and gas apply heat differently. Using airflow as a brake or have drastically different setting to counteract each other, does not lead to a happy end. Catalytic reactions like smoothness, and harmony like seashells and other aspects of nature. Though I'm sure some exceptions apply. Like dance partners unity and proper timing of the two are key. And the application of air and gas depend of density, free/fixed moisture, and flavor content.
Top

Hi,
Thanks for all the wonderful information. I would like to know where people got to with their experiments on this front.
Almico - are you still liking the "Zero airflow start" method? If so, what are the main advantages in the cup?

stoned_survival wrote:Hi,
Thanks for all the wonderful information. I would like to know where people got to with their experiments on this front.
Almico - are you still liking the "Zero airflow start" method? If so, what are the main advantages in the cup?

Zero airflow is not practical on my roaster. ET would need to be 600*F in order to get BT to rise without airflow. These days I'm starting the roast at 25% damper and opening up to 50% before dry end and leaving it there.
Top
← Back •
By accessing this site, you agree to the site's terms of service. If you need help with the site, please contact us.