I'm in the market to upgrade from my Behmor roaster. I've done tons of research, and narrowed my options to the Quest M3s and Bullet R1. I don't have any experience with this caliber of roaster, and I've found it really difficult to find viewpoints posted anywhere around this question:

Based purely on results in the cup, do you think the Bullet is really capable of roasting better coffee than a Quest M3s fit with thermocouples? And if so, how much better? I get that the Bullet has cooler software, automation, much bigger max batch size, etc. But does that actually boil down to better coffee?
Top

It's quite a step up from my Behmor but I haven't roasted on a Quest, however I just read this on the Community.Roast.World site that I hope it's ok to share. 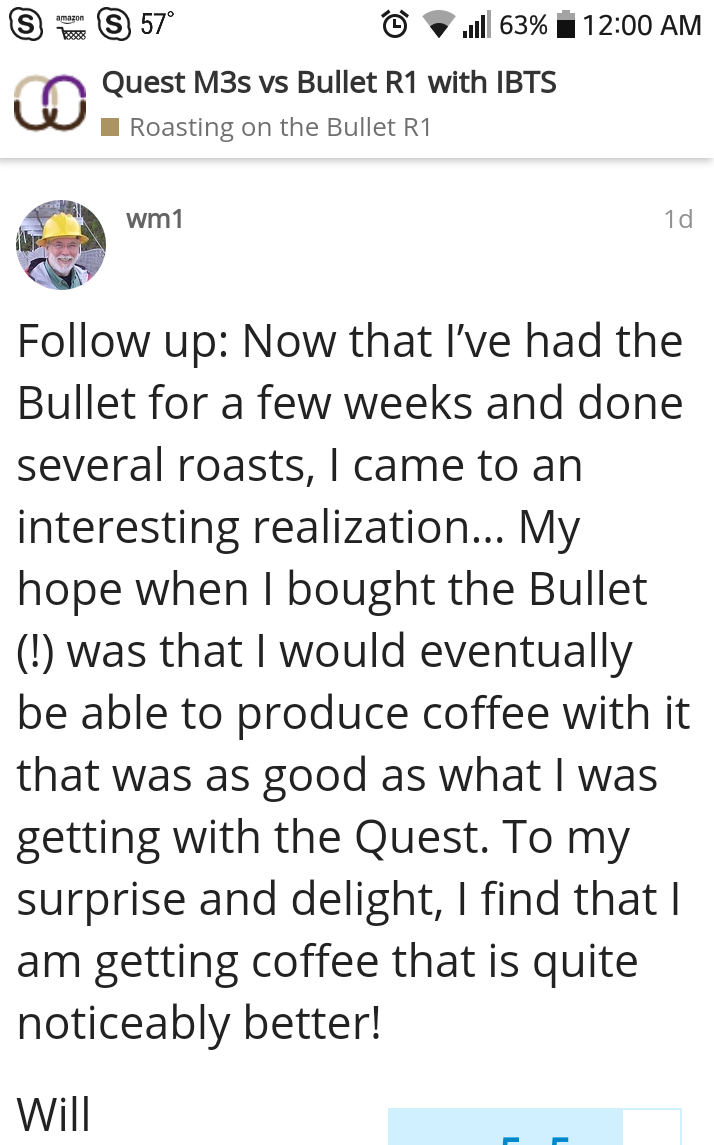 easier seems more likely likely, but not necessarily better in the cup IMO. Ultimately it may be more convenient and a faster way using a Bullet to reach a good result but given that some folks are capable of producing GREAT roasts with very modest equipment I would predict that the in the cup difference is not huge if used by a skilled roaster.
LMWDP #483
Top

Ive not roasted on either

The bullet user community doesnt appear to be too concerned with quality though, mostly quantity and price-point.

Not sure majority care. Makes it difficult to find data representing what you want.

I think it holds great promise, and can definitely satisfy most people. Maybe not top 10%, but quest doesnt satisfy them either. I know many are frustrated trying to tame their quest profile as well.

There is always some bias in peoples evaluations of their own purchases as well. Unless some skilled roasters and tasters do a head to head with same beans...its just mostly conjecture.
Top

I don't have a bullet I do have a quest. I upgraded from behmor. I considered both. I wound up with the quest based on price, the substantial amount of user posts, and my general DIY attitude. It has taken me awhile to understand its nuances, but I now think I am producing really good roasts. On the plus side, because I am doing smaller batches (150g) it has enabled me pretty quickly to understand variability in roasts and how to reproduce various profiles. I probably have 100 roasts under my belt at this point. I don't love the lag (eg you have to make all your adjustments a minute ahead of time) but I am getting better and better at thinking ahead. I wouldn't say I have branched out to much into playing around with different types of beans, but I will at some point.

I'd also note that artisan has been my friend. I like being able to rewind to see what I have done in order to either reproduce or make slight adjustments the next time. It has a ton of customization features which I have increasingly used (e.g. setting power level custom buttons to mark my curves easily).

So, my general view is the quest is worth considering if you are more experimental in nature, don't mind doing a few smaller batches versus having the ability to do a bigger one, and don't mind a few early "ugh I'm chucking this" roasts.
Top

I recently upgraded from Behmor to Bullet. Whichever you choose will require you to learn some new skills. You will have much more control over your roast. Which translates to you will have many opportunities to ruin beans. I got my Bullet last January and I'm almost to the point of feeling like I know what I'm doing. All in all it's worth it.

My thoughts on the Bullet:

Induction heating works. I'm sure it's not as fast as gas but it responds well to temperature changes.

I really wish the US version was dual voltage or that a 240 volt version was an option without buying direct. I suspect it would be a bit more efficient with higher voltage. I have a 30 amp 120 volt outlet in my garage so I can deliver all the juice it wants. But still...

I'd prefer knobs to + - buttons but they work.

Being able to actually observe what's happening to the beans during the roast is bliss.

Clean up is reasonably easy. The chaff collector is a bit of a pain to empty. It's done by a small opening at the bottom; a fair amount of shaking is required.

It's really well built. Weighs in at over 30 pounds.

Their RoastTime software is OK. Artisan is alleged to work but I've not had any success getting the two to talk. But then I've not made a serious effort to find out why. RoastTime is Good Enough.

Sweet Maria's service is excellent. Mine came with a defective exhaust fan. They had a replacement fan right out to me. The roaster's design made for a straightforward replacement.

All in all I'm pleased with the Bullet. My roasts so far have been 500g but I really like having the ability to go to a full kilogram if the need arises. THAT was a key decision point for me.

I've no clue as to which you should get. Pick one, ruin a few ponds of beans while getting the hang of it and have blast doing so.
Top

roger_s wrote: I really wish the US version was dual voltage or that a 240 volt version was an option without buying direct. I suspect it would be a bit more efficient with higher voltage. I have a 30 amp 120 volt outlet in my garage so I can deliver all the juice it wants. But still...

You can buy the new v2 220v PCB and it effectively converts your roaster to a 220v one.

I think the Bullet might have a slightly lower quality ceiling to the Quest because the Quest has such a low thermal mass and adjustments (gas, fan) are stepless. There are only 9 power settings on the Bullet, and while the 10 fan and 9 drum speed settings help a lot to vary things up that's still less fine grained than the Quest. However I believe the Bullet has a significantly lower skill floor to roast well, is much more convenient workflow wise (at least for me), and can roast 1kg comfortably. However what really makes the Bullet worth the extra money for me is the ability to replay roasts. I have significant coffee ADD and considered the Quest so I could roast many different coffees in small quantities but in the end I decided the greater feature would be the ability to replay a God roast, which has always plagued me in the past. Plus, you can always roast in small quantities with the Bullet, although if you know you're going to be exclusively roasting under 300g then I'd go with the Quest.
Top

No. Anyone that says otherwise is high on confirmation bias
Top

I'm a Quest M3s owner. I am very pleased with it. The electric heating elements are slow and take some getting use to. The airflow is a little low and not high enough to drop heat like my North does. But I think it is high enough to prevent any smokiness and removes chaff reasonably well. I have not heard from any Bullet folks who was unhappy with the performance.

Recently I have been playing with a Phidgets IR 1045 sensor (not for bean measurements). I've learned a great deal about how IR works and doesn't work. In order for an IR sensor to be accurate, it needs to be collecting IR energy from a true black body (emissivity of 1). If emissivity is less than one (and coffee is most certainly less than 1), then the IR energy the sensor collects is also includes the surrounding background causing temperature shifts. In the case of the Bullet, their sensor must be collecting IR from the hot drum along with the beans. Maybe they are doing a correction, but it isn't simple to do. IR is instant, but do we really need that? We likely need to filter IR due to noise, which adds delay similar to a thermocouple probe. Folks who use the Bullet say it is very quick responding. But I guess I am not sold on the IR bean probe.

I've lurked over at the Bullet FB site for a while. There sure seems to be issues. Firmware updates, panel errors and other things going wrong. Now, maybe it is just a spot all dump their issues. But I haven't had any reasons to fuss for over a year or more (just sayn). That said, replacement parts for the Bullet do seem well supported and owners don't seem upset with reliability.

I liked the size of my Quest to learn on, but when you get to the point where you want to give coffee to others, the batches won't fill a standard bag (12oz or 1lb). But the Quest is great for roasting samples and complements bigger roasters well. I now do most my roasting on a 1K North. But kept the Quest for 100-150gm sample roasts.
Top

Thanks for the information. That's worth looking into.
Top
← Back •
By accessing this site, you agree to the site's terms of service. If you need help with the site, please contact us.