Another airhead drums: Initial Impressions of the Quest M3

In May this year, I attended a cupping course, and I was very surprised at how different the cupping roasts out of the Probat sample roasters tasted compared to the ones I air roasted at home. The roast color and profile were almost identical. The acidity and origin flavors were also quite similar. But the drum roasts had a whole 2nd dimension of malty and woody flavors that were absent in my air roasts. Air roasters develop caramel flavors at medium and darker roasts, as do drum roasters. But these malty and woody flavors, which develop prior to the first crack usually taste poor in air roasts, and also mean the other flavors will not develop properly. This was not the case in these sample roasts, which tasted rather nice. For the first time, I was tempted by drums.

Then I hear about two Taiwanese companies making ventilated solid drum roasters, in effect, the design used on Probat drums. The Quest M3 looks like the first real "semi-commercial" roaster, with a heavy solid drum, fairly heavy duty components, variable heat and airflow, a thermometer and tryer, and fast cooling. So I ordered one, and Molly got it too me in a week. One heating element fried on the first roast, and Molly got me the replacement (along with a second one in case the entire production run had been defective) also within a week. The replacement took 1/2 hour, since the roaster is built for home maintenance. I was very happy.

My first roast was a sample roast. I followed the instructions given, holding the power at around 6.5 amps and the airflow at 4.5 for a 150 gram load, but dropped in at 200C to get a fast 9 minute roast (sample roasts in ventilated Probats use roughly 375 to 400F drop ins). Success! The same malty and woody tastes I had at the course. There was a whiff of grassiness, so I'll need to fine tune it for a slightly slower drying period. Now it was time to learn how to use the roaster

I'm still a long way away from producing high quality roasts or profiles; but I have instrumented the roaster for reliable and repeatable profiles. I wanted to share this, so that it might save others some work.

Bean Temperature: For this I simply wrapped the TC around the supplied thermometer, kept it out of the way of the tryer, and brought it out through the underside of the air exhaust/bean entry funnel 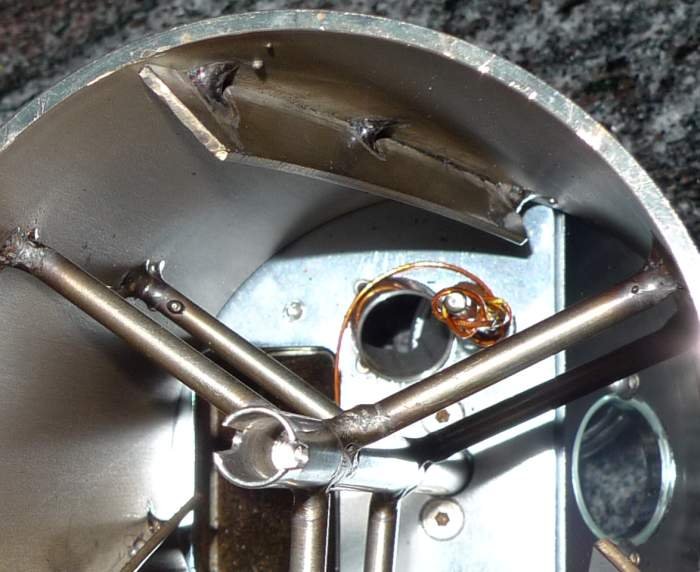 This is more complicated. After lots of experiments, I placed the TC outside the drum and above it. The skin of the roaster has three screws that are on the underside. These need to be loosened, and the skin turned so the bolts are at 1 o'clock. Then the TC can be pulled through the gap and tied to the upper right support bar: 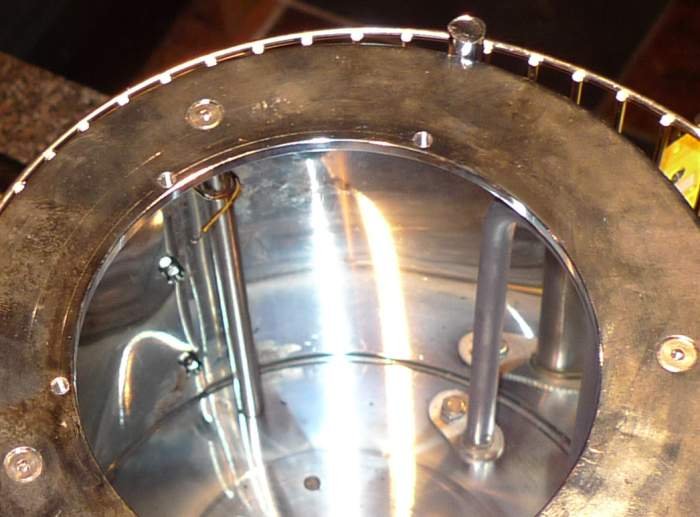 This placement produces a fairly steady and useful indicator of the drum's temperature. Here is a profile: 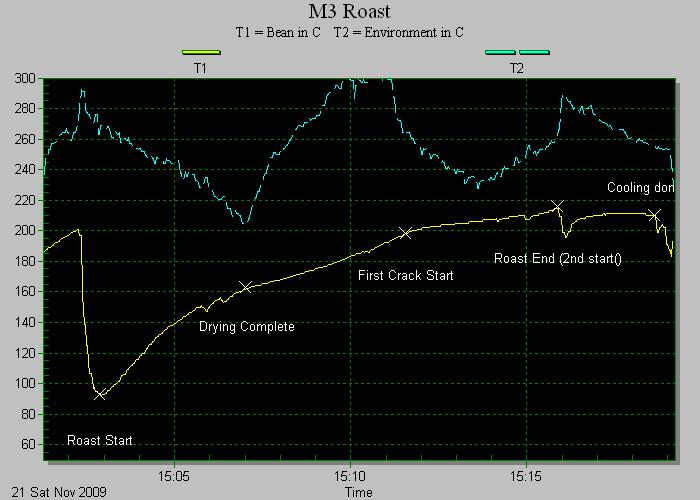 At this spot, it is easy to control the speed of the roast after the first crack. One can drop power to slow the roast down, but make sure the drum temperature stays above about 240C (480F), so the roast doesn't stall out. Placing the probe below the drum puts it into the air being drawn into the roaster. I had it there initially, but no matter how hard I tried, I kept getting incredibly jittery readings like this: 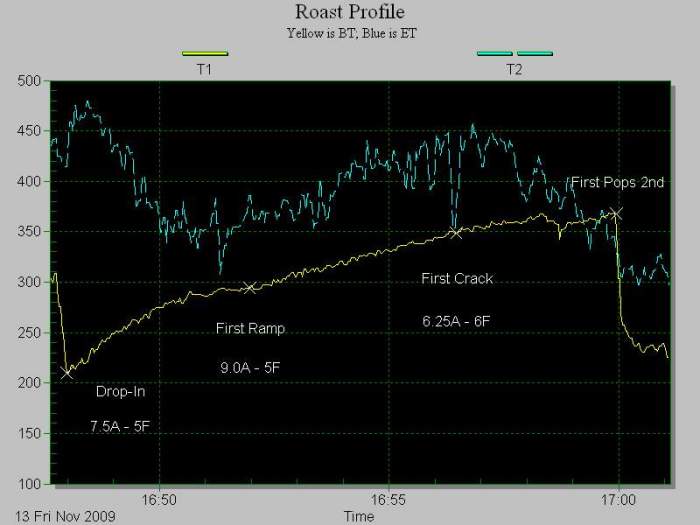 While this is the fastest responding spot to monitor, it was just too noisy to be useful for controlling the roast's speed.

Venting Tips: If the airflow is kept above the 4 dial setting, all the smoke vents out of the grill at the rear of the roaster. This makes constructing an effective venting system easy. I place mine on my cook top underneath the vent hood. This also requires a deflector to block the horizontal outflow and deflect it up to the hood: 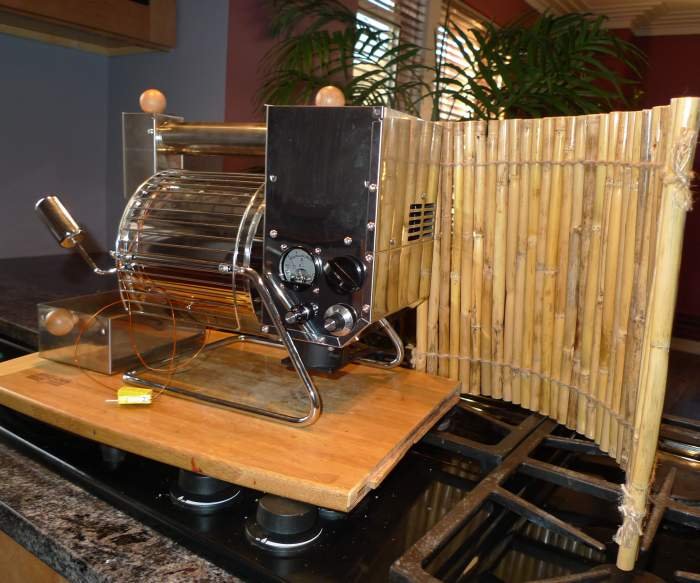 I also tried roasting backing the exhaust to the window. Even in my old building, which has negative pressure (i.e. air blows in when opening windows), the exhaust vented out without problems. However, the air intake points in the same direction as the exhaust, so it was sucking in cold air. This really slowed the roast down, taking it from 13 to 19 minutes even when I kept the drum temperatures up to par: 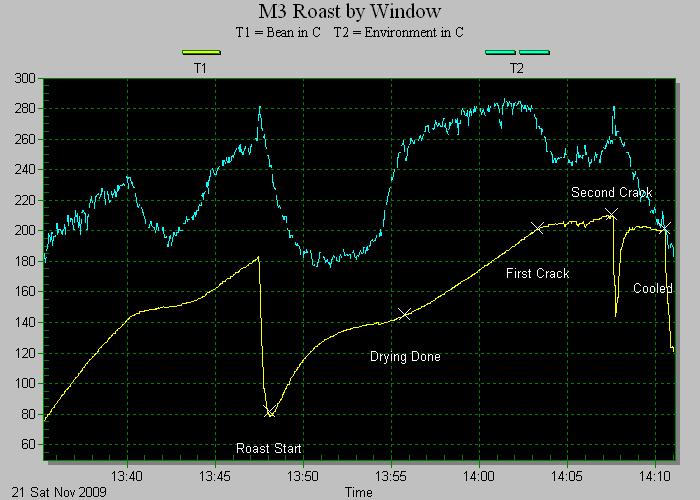 So people roasting by the window in the winter, will need put a deflector at the air intake, so it gets warmer room air.
Jim Schulman
Top

Nice purchase, Jim - and the company provided very proper service on the heating element failure. In the event you MIGHT want to substitute a 1/8" thermocouple for the thermometer, I have two stainless steel adaptor kits left which completely take the place of the thermometer and its housing. 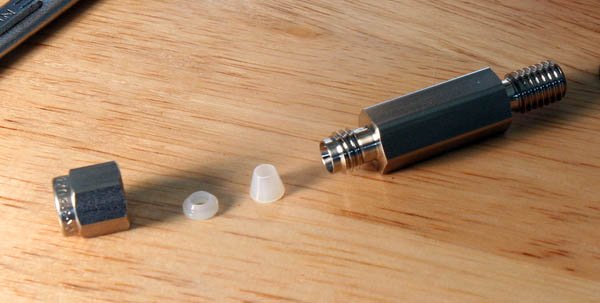 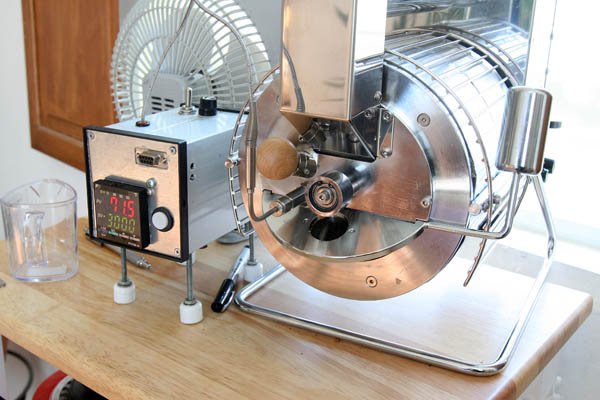 Thanks, I may go that route. For now, I just want temporary TCs for monitoring. The site of the stock probe does seem optimal (I tried the exhaust pipe, where Probat locates their probe, and it isn't as good).

How hot does the drum get? Is the 300c max.(first graph) just off the drum surface? How spread out is the heat application to the drum?
LMWDP #167 "with coffee we create with wine we celebrate"
Top

I can't really talk about the drum surface. The air directly above the drum, a few millimeters away, where I'm monitoring, will top out at about 325C (615F). Just beneath the drum it gets to 300C (570F). I think these temperatures are slightly higher than the temperatures on the inside surface of the drum (the true MET). I do not know yet what the upper limit is to prevent tipping or acrid flavors. So far I've been trying to stay below roughly 275C (525F). This is 50F higher than I can get away with on my air roaster, but I don't think it's an apples to apples comparison.

I've appended a schematic of how I understand it. This may get revised as I pick up experience, or if Rafael or Orwa care to correct my errors. 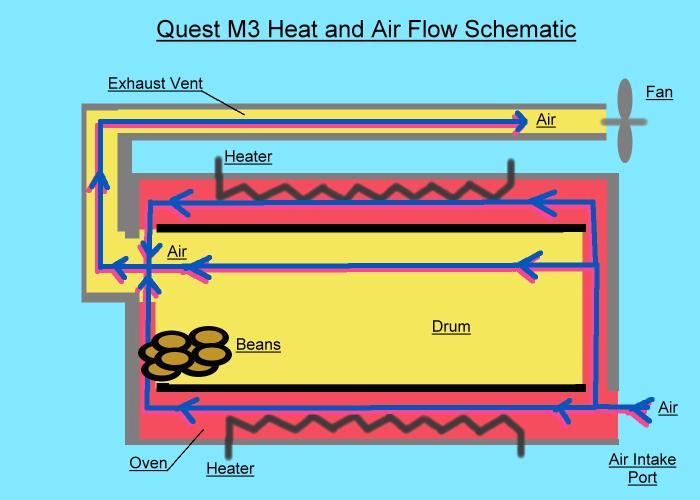 Wuau. Congrats Jim. This is very cool. Now we have a knowledgeable person with the m3 roaster. Now I can finally learn something.

About the adapter. Eric's adapter was made to hold and protect a 1/8" probe using the already made hole for the thermometer. I can attest it is high quality.

The airflow diagram you made is right.

I've been very happy with the roaster and so far it fits my needs (well, it is also a toy jeje). I still need more hands on and lots of reading.

The air flow looks very well thought out. Should keep heat from pooling in any spots. The vanes in the drum look like they should work pretty well also, being tall enough and with the slight angle should roll the entire bean mass over.
Have you tried a heavy chaff DP? Does the agitation seem to release the surface chaff well enough and can you balance blowing out of the chaff and managing the temp.?
You have fan setting shown as F5, F6 is the scale from 0-10? Overall seems like a very nicely designed, built and compact roaster

LMWDP #167 "with coffee we create with wine we celebrate"
Top

The fan runs from 0 to about 8.5. Usable roast settings run from 3.5 to about 6.5; the highest setting is for the dinky looking but surprisingly efficient cooling system (about 3 minutes for 250 grams).

A few bits of chaff fall through the gap between the drum and end plates into the oven, and need to be cleaned out; but the rest ends up in the ventilation chamber at the back of the roaster. There is no chaff left on the beans. The removal is actually better than my air roaster. By the time the cooling is done, all the chaff is in the sieve; but before that, some will be on the bottom plate of the ventilation chamber as well.

The easiest way to communicate profiles seems to give the power and fan settings at various temperature milestones (ideally in terms of A + b*bean weight). Certainly this is the best information for a new user. However, for my own roasting, I'd like to hold a simple environmental profile and let the beans do their thing. I want to stop doing the multiple peaks and valleys I posted above and get to something simple like this: 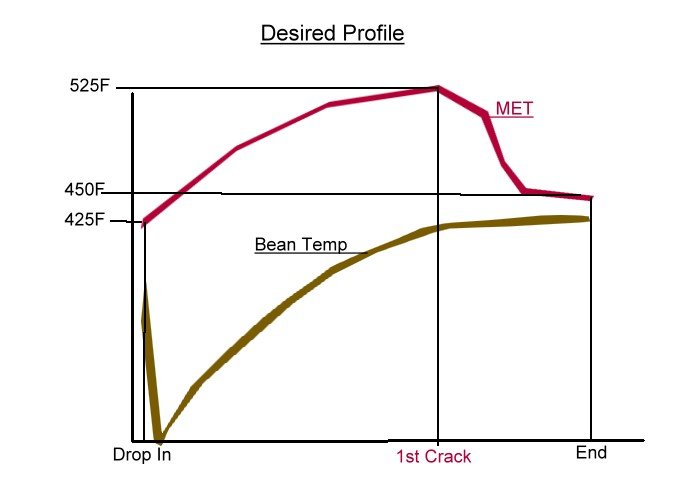 In a perfect world, this would require stabilizing the temperatures before drop in, then doing a high amperage/low air setting at the drop in, and switching just once to a lower amperage, high air setting just ahead of the first crack. With luck, thermal storage would take care of the rest.
Jim Schulman
Top

I'm not sure if this means the response on bean temperature is too slow for PID control. I was seeing lags of about 45 seconds and 2 minutes for a full response to pulses on the heat or fan during my dry runs This makes a ramp control a bit dicey. You might consider PIDing the MET at roughly the point where I'm measuring it. The response there is only 15 seconds lag, and one minute to a full response.
Jim Schulman
Top

another_jim wrote:In a perfect world, this would require stabilizing the temperatures before drop in, then doing a high amperage/low air setting at the drop in, and switching just once to a lower amperage, high air setting just ahead of the first crack. With luck, thermal storage would take care of the rest.

I eagerly await your results.
Ian's Coffee Stuff
http://www.ieLogical.com/coffee
Top
← Back •
By accessing this site, you agree to the site's terms of service. If you need help with the site, please contact us.