Why is the Rancilio Rocky so unpopular here?

I am looking to buy a grinder : Rancilio Rocky Doserless. I would like to have some feedback about it. Why the people don't include this model in the reviews and never talk about this? Is this so limited or cheap? How much steps can you make just for espressos +/-. What about the durability of the product? Is it that bad if you compare it to a MACAP MC4 "stepped"?

Perhaps for the same reason that the Silvia doesn't get much airplay on H-B: at $300-400, the 50mm burrset Rocky has is somewhat overpriced, and there are significantly better flat burr grinders available for only a little more money (e.g., the 58mm burrset Compak K3 or Macap M4). And yes, stepless adjustment is nice for espresso grinding.
John
Top

WLL has plenty of feedback on the Rocky and it scored 4.8 out of 5 w/ plenty of reviews. There seems to be quite a few people that like them and have done a few mods including making it stepless. You can find them around $350.00 when you catch a special 5-10% discount some of the vendors offer. That's still around $100.00 less than the K3 Touch, not sure on prices on Macap stepped. Rancilio makes a great product, My Silvia has been rock solid for 5 years.

Mark Well wrote:I am looking to buy a grinder : Rancilio Rocky Doserless. I would like to have some feedback about it. Why the people don't include this model in the reviews and never talk about this?

The crowd around these parts is a BTDT sort of group. On its own merits Rocky is a very good grinder, but it is a starter espresso grinder. When compared to all other "serious" espresso grinders it sits at the bottom of the list with only maybe three to five grinders below it (again, talking about grinders dedicated to be used for espresso). I didn't actually count, but you get the idea.

Some problems with the Rocky include:
- burrs don't last as long as some people seem to think (when I had one I changed the burrs about every two years and noticed the difference every time.)
- it creates a dense, clumpy grind (relatively speaking)
- the top burr mount sits loosely in the threads of the body
- one step (click of the adjustment) is equivalent to about 4 seconds of extraction time

Many of us here have started with Rocky or a similar grinder and have moved up and found the difference between Rocky and the better espresso grinders to be greater than we expected. It is why so many state that the grinder really is the most important part of the equipment equation (The Gospel According to Arabica - 2:25).

Of course, the choice of a Rocky is often one of economics, and in that price range it is a quality grinder. But for that much money, the general recommendation around here is to get a used Mazzer Super Jolly and put new burrs it it. Careful shopping can get that for less than a Rocky, and for espresso it is far superior to the Rocky. At least to say, I don't think there is one person here who, if given the chance to choose, would pick the Rocky over the SJ. The other benefit, the SJ would well serve the needs of most any espresso machine, and I would not say the same for Rocky.

As I mentioned above, everything is relative, and I think that most user reviews that speak highly of the Rocky are from users who never had a grinder nearly as good as Rocky nor have they tried a better grinder. Yes, it can be modded to be stepless as well as firming up the upper burr carrier, but try pairing it with a "pro-sumer" espresso machine and its faults become even more apparent.

My advice... spend the extra now and get the last coffee grinder you will ever need and don't look back. On the other hand, if you are not sure about this whole espresso thing, the Rocky can be sold at a decent price in the future because of its reputation, so you won't lose too much.

I went from a Rocky to a (OMG) Mazzer Kony. I would not recommend the Kony to many people because of its size and cost, but the difference was apparent and appreciated. .....all IMO, of course.
Espresso! My Espresso! - http://www.EspressoMyEspresso.com
LMWDP #644
Top

caferetro wrote:WLL has plenty of feedback on the Rocky and it scored 4.8 out of 5 w/ plenty of reviews.

I view vendor feedback scores with deep skepticism. Even on Amazon, shilling is a real problem. For example, I noticed a popular product with dozens of responses receive one unflattering comment, followed by flood of positive comments in the next two days. Coincidence? I don't think so. Product manufacturers are very keen on the influence of online opinion and some are not beneath attempting to game the system.
Dan Kehn
Top

I've used a Rocky DL about 3 years for daily cappas and drip coffee. Before that I used a Maestro (briefly), which, although great for drip coffee, is not up to grinding for espresso.

I have a low-clearance issue (15" max), so that narrowed my grinder selection and keeps me from catching upgrade-itis.

I think you'll find the Rocky to be quite adequate as long as you're not expecting to pull top-class straight espressos, especially if you do the "WDT" technique and get yourself a "click-clack" lid that fits snugly enough to help puff the grinds out. (These are described elsewhere in these forums.) The espressos are consistently good to very good, just not great. Whether this is an endorsement or a criticism depends on your expectations.

The limitations of the Rocky with my hx machine (Bezzera BZ02s) become apparent when trying to dial-in espresso roasts from some of the various roasters. I'm just not able to grind some roasts, which I'm sure are 1st rate, "just right" to pull really good shots. The grinder is just one factor in this, but you can only do so much to compensate if the grind is too coarse/too fine. So I just stay with a short list of roasts that work well with my setup and enjoy the cappas.

As long as I have the Bezzera, I'll probably keep the Rocky. (I switch between grinding espresso and grinding for drip a lot, and it's great for that.) If either the grinder or hx wear out and force me to upgrade (darn!) I'd go with one of the higher end grinders (and have to figure out what to do about my low-clearance issue without replacing cabinets).
Top

HB wrote:I view vendor feedback scores with deep skepticism. Even on Amazon, shilling is a real problem. For example, I noticed a popular product with dozens of responses receive one unflattering comment, followed by flood of positive comments in the next two days. Coincidence? I don't think so. Product manufacturers are very keen on the influence of online opinion and some are not beneath attempting to game the system.

Thanks for the heads up on this,

John Smith wrote:Why the people don't include this model in the reviews and never talk about this? Is this so limited or cheap?

The members of this site (as a gross generalization) are the kind of people who are looking to improve the quality of their home espresso. This is contrasted with the audience of other sites where people are looking to learn how to start making espresso at home.

I was looking for the black model MACAP MC4 (stepless). It is a bit cheaper than the chrome model, but I think the exterior housing is made of plastic.

Is the MACAP MC4 black stepless could be a nice alternative to the rocky? What is your opinion on this model?
Top

Doserless grinders, as a class, clump more than their doser counterparts. I tried the Macap MC4 and it was a worse clump monster than the Rancilio Rocky doserless. That said, the Macap doserless does have its fans, most notably Ian (cafeIKE), who recommends grinding per dose. He posted a photo of his "snout clearing tool" in the thread Have Rancilio Rocky, looking for an alternative (willing to pay more): 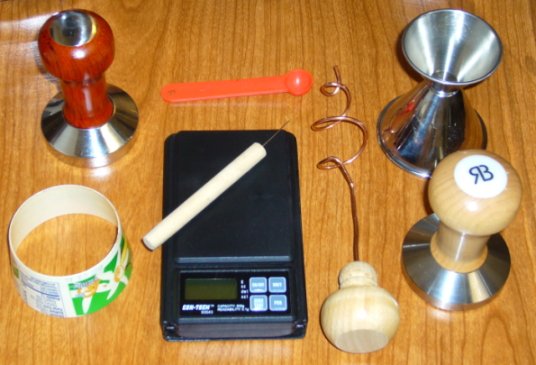 Dan Kehn
Top
← Back •
By accessing this site, you agree to the site's terms of service. If you need help with the site, please contact us.