Why is the Rancilio Rocky so unpopular here? - Page 2

John Smith wrote:I was looking for the black model MACAP MC4 (stepless). It is a bit cheaper than the chrome model, but I think the exterior housing is made of plastic.

It's black paint on the same metal chassis as the chrome MC4.


John Smith wrote:Is the MACAP MC4 black stepless could be a nice alternative to the rocky? What is your opinion on this model?

The MC4 is quieter. It offers infinite adjustment. It has 58 v 50 mm burrs.
IMO, Rocky is ugly. The grind steps are way too coarse if you're serious.
OK?

The MC4 is a serious espresso grinder, but it's just a 'starter' for the glitterati.

Mark Well wrote:I am looking to buy a grinder : Rancilio Rocky Doserless. I would like to have some feedback about it. Why the people don't include this model in the reviews and never talk about this? Is this so limited or cheap? How much steps can you make just for espressos +/-. What about the durability of the product? Is it that bad if you compare it to a MACAP MC4 "stepped"?

It's not popular because it has a sloppy, cheap, stepped burr adjustment. Wait for the Vario.
"Disclaimer: All troll-like comments are my way of discussing"
Top

So I should go with "doser" model of MC4 ? Doser is not better when you make big quantity of coffee? It seems to work less good for just some grams. Some people complain about the coffee that don't go in the small "door" of the doser chamber...

When you say clump, what do you mean exactly? The coffee is make small balls, or sticking together?
Top

Yes, A doser is good for large quantities because you can be off steaming milk while grinding instead of standing there holding the portafilter. The downside as you stated are grounds getting stuck in the chute (the thing between the grinding and dosing chamber) and in the doser and becoming stale.

I have heard the M4 is nice as are the Compak K-3 and Mazzer Mini. Here is a comparison between a few Espresso Grinder Reviews - Mazzer Mini, Mini E Doserless, Cimbali Junior, Macap M4

A clump is a bunch of grounds sticking together forming a little ball. Here is and example of this http://www.pbase.com/teme/image/78651000.jpg.
Top

Mark Well wrote:So I should go with "doser" model of MC4 ? Doser is not better when you make big quantity of coffee? It seems to work less good for just some grams. Some people complain about the coffee that don't go in the small "door" of the doser chamber...

When you say clump, what do you mean exactly? The coffee is make small balls, or sticking together?

The exit chute for the M4 (doser) will hold back far, far less grounds than the snout of the MC4 (doserless). A doser may seem pointless given the modest service requirements of your kitchen, but they are helpful for breaking up clumps/evening out the distribution by thwacking the doser handle. This action breaks up clumps formed by coffee sticking to itself and also by grinder compression as grounds are extruded from the grind chamber to the doser.

Below is an example of significant clumping: 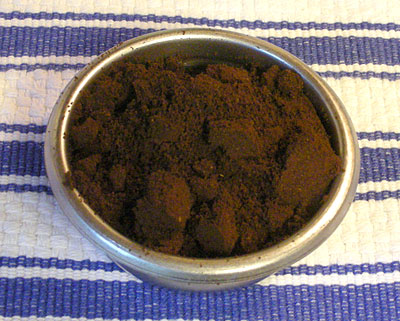 It can be eliminated manually using the WDT.
Dan Kehn
Top

Mark Well wrote:How much steps can you make just for espressos +/-. What about the durability of the product?

First of all, the Rocky can be used to create very good espresso as you can read about elsewhere on this site: Titan Grinder Project: Can it Beat the Mazzer Robur?

I currently use a Rocky. The biggest problem I have is the adjustment and precision of the mounting of the burrs. It could not grind fine enough when I bought it (new and tested from Rancilio), this was helped by some teflon tape, but I still only have around three steps useful for espresso (the three right after the zero point). I would not buy a Rocky again for espresso because of this.

Regarding durability: The Rocky seems very durable and spares are easily available, at least in my part of the world.

My advice: If you go for the Rocky, make sure you can return it if it cannot grind fine enough for your use.
Christian B.
Top

In defense of Rocky, one step is around 5-7 seconds, and you can adjust the amount of coffee or make it step-less as described here: Stepless mod for Rancilio Rocky- a cleaner approach.
Christian B.
Top

Before one embarks on a DIY project, the original should offer something unobtainable elsewhere.

Michal wrote:A clump is a bunch of grounds sticking together forming a little ball. Here is and example of this http://www.pbase.com/teme/image/78651000.jpg.

While those look like clumps, I don't think a grinder that "clumps" like that would be an issue for anyone. Clumps the size of what Dan showed are most certainly a problem and need WDT to fix.
Top
← Back •
By accessing this site, you agree to the site's terms of service. If you need help with the site, please contact us .