Two compact, well-engineered and well-built grinders landed on the desert landscape of my coffee bar, replacing my Mazzer Robur E and Mahlköenig Tanzania. A third grinder replaced a Kony E at my office, and I have had no complaints about coffee grinding, ever, since getting my Monoliths. The low retention, relative quiet, absolute reproducibility and consistency of extraction and grind have enabled me to advance my barista skills and palate development considerably over the last two years. The mantra of "Grinder, Grinder, Grinder!" is more like a universal constant in my reality. These grinders have stood the test of time in terms of reliability, low retention, and great espresso. The importance of grinder alignment as promulgated by Frank (Terranova, Titus and modded Versalab) and Denis (Kafatek Monolith Conical and Monolith Flat), has also been accepted by commercial manufacturers, from the newer crop of precision hand grinders, to LWW EG1 and the upcoming Ceado beast.

Contemporaneously with all of this, the trend among the hoi poloi of the coffee cognoscenti has been the pulling of long shots using EK43 spice grinders to obtain high extraction ratios, and overcoming some of the acid bomb characteristics of underdeveloped, light roasted coffees. This worked pretty well, and subsequently burrs were modified, and EKs were aligned, and now Mahlköenig is releasing a version of the EK43 for barista purposes, but the thing will still be enormous, loud, and a bit out of place aesthetically in the home. With better developed coffees, modded EKs with SSP burrs make excellent EKspresso, and espresso.

Another omnipresent element of the Jedi religion of the Grinder Wars is the notion that "Bigger is Better." This has been very true in the past, but with excellent alignment, it is abundantly clear that even small grinders like the Helor 101 and the Kinu M47 punch way above their weight class.

But... This thread is not intended to discuss the low end. An information embargo has been lifted, and I am now allowed to introduce another solidly built precision grinder from Kafatek, intended to address the desires of those of us who would seriously consider putting an EK43 or Compak R120 in our house: 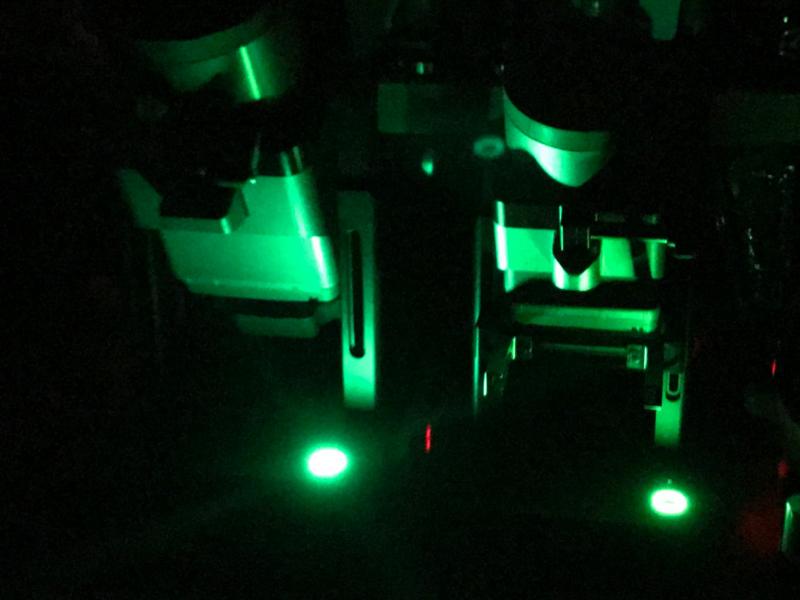 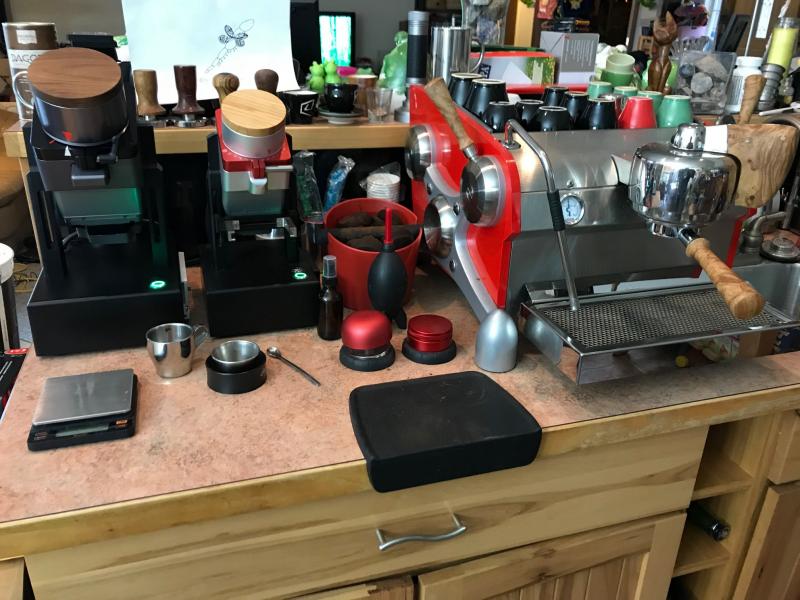 First, the beta version. Three copies of this grinder were made, and Denis and I each tested one, while the third was tested by three others for several months. I will not "out" the other beta testers, but they are welcome to chime in here as they wish.

The concept proved successful and worthwhile, constructive criticism was soliceted and given, burr and other modifications were made, and the final production version is now in my hands. Well, except for the portafilter forks, which will come back from finishing in the next few weeks. They will look like those on the Flat. The initial production batch is very small, and I am fortunate to have the opportunity to get one of the first two, probably because I wanted in the same color as Denis did. I call it Darth Maul. 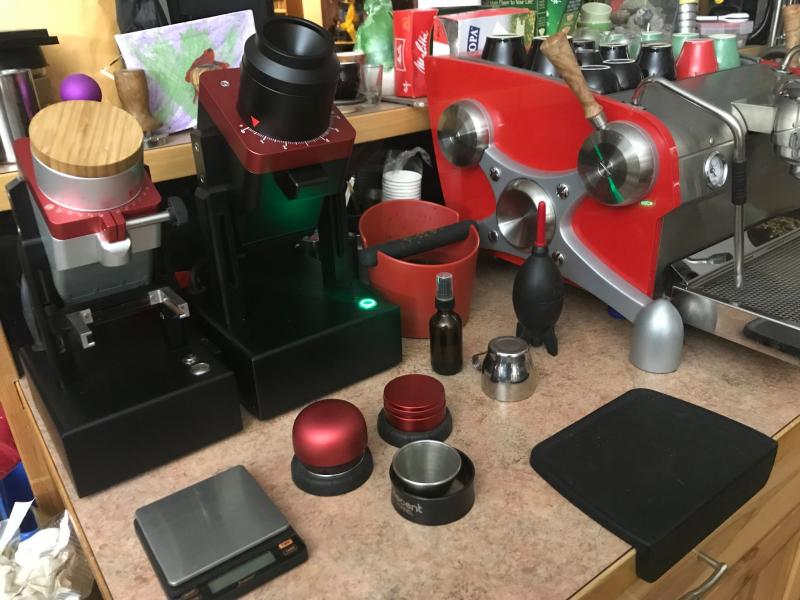 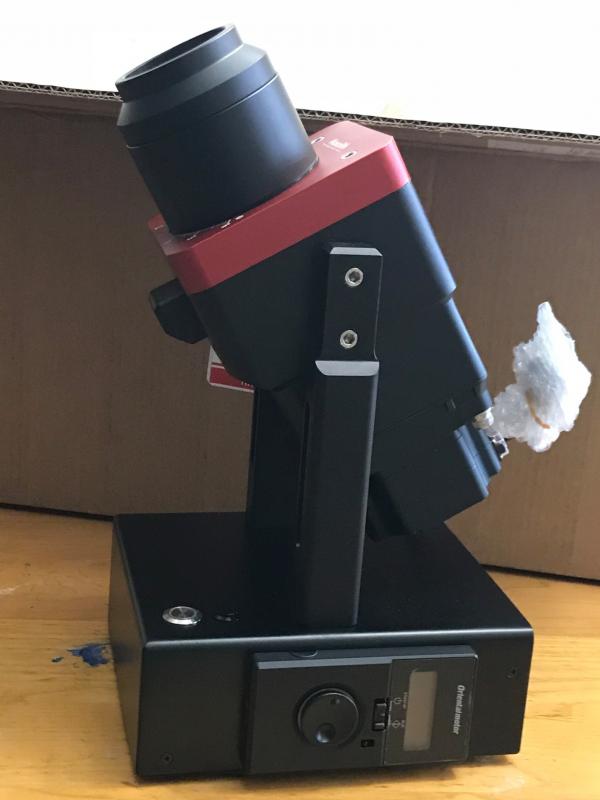 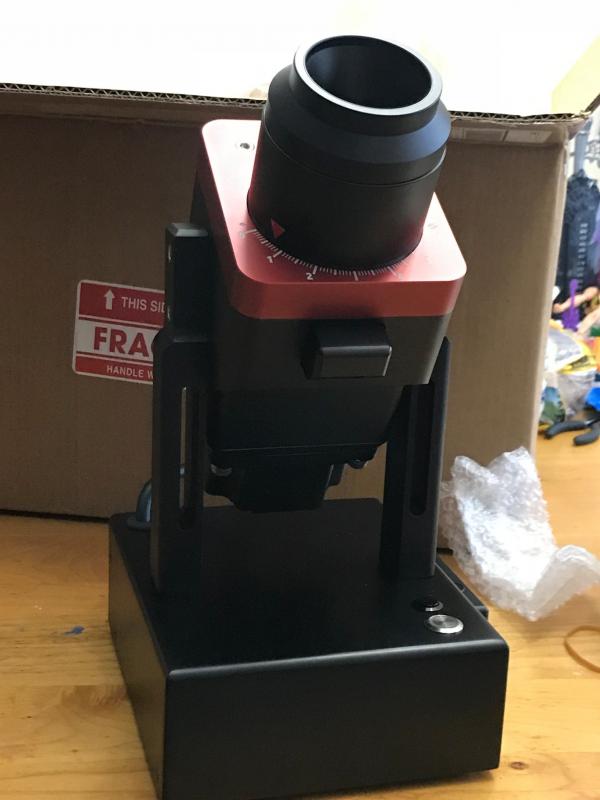 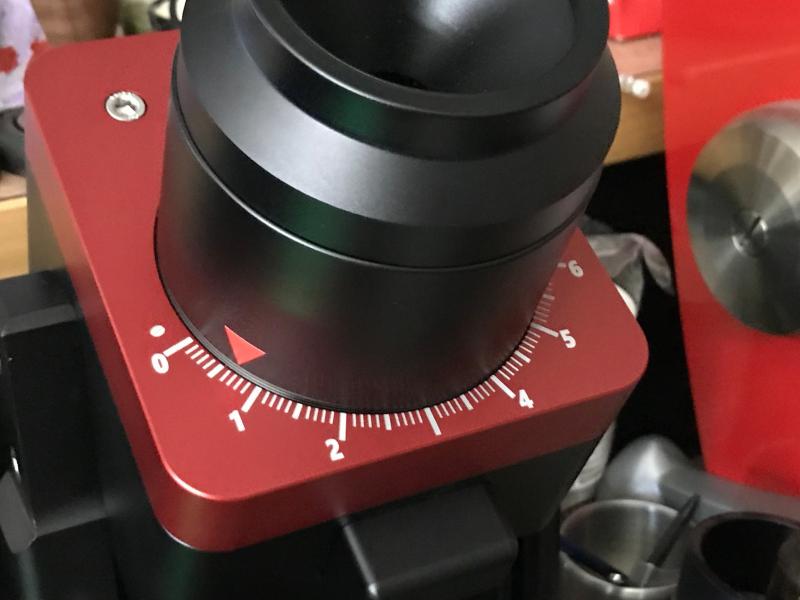 98mm customized SSP burrs, a result of several iterations between Denis and SSP. These are shown in TiN, but mine are "Silver Knight." The beta grinder had Red Speeds. They all grind the same. Denis will pick his favorite, and we will all like it. Silver Knight may be the frontrunner. The grinder goes up to 400 RPM, adjustable of course. So far, I like 350 for espresso and 300 for drip. Burrs touch with arrow at zero. 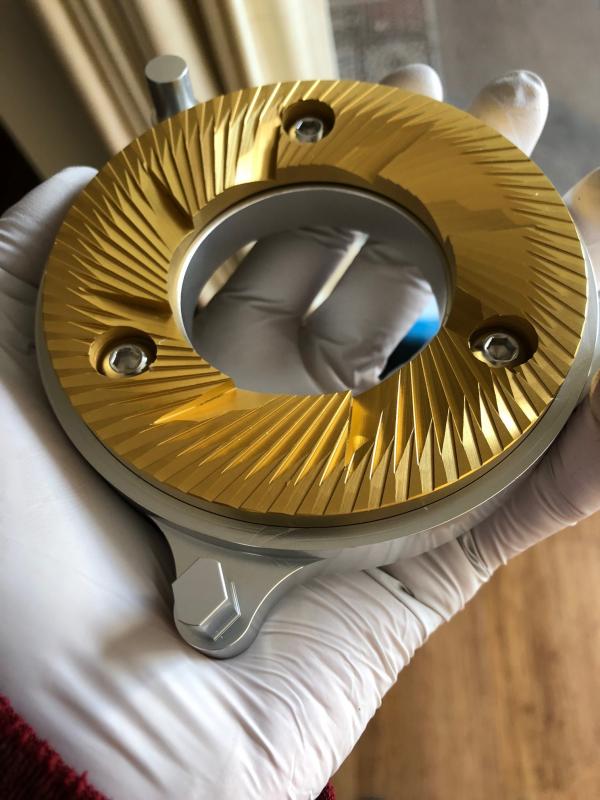 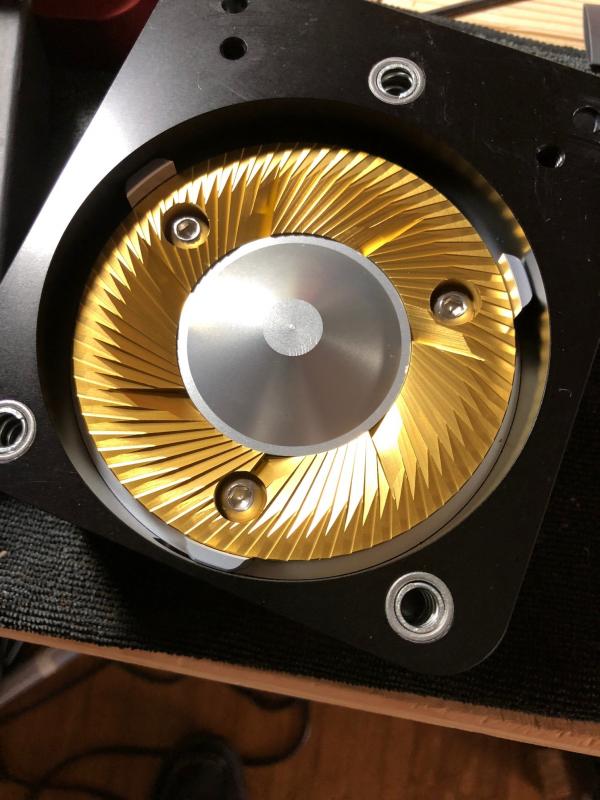 Also note the change in the locking mechanism. This is very solid, will not wander, and allows for even more precision in burr alignment per Denis. It grinds brilliantly from turkish to cold brew, and everything in between. Ratio 8 / Kone drip pots have virtually no visible fines.

This grinder does what the Flat does, equally or a bit better for Espresso. It is equal to an EK43 for non espresso applications, and it can make EKspresso as well as, and espresso better than the EK43. If you like Monolith Flat, then this is the gamma-irradiated Hulk version. Main difference is even better clarity than the Flat, which is no mean feat.

That said, it is smaller, cuter, and quieter than the mighty EK43. It retains basically like the Flat, which is to say not at all, with some taps and RDT. WDT is optional, but as is the case with all Titan class grinders, helpful when the burrs are new.

Welcome to the Dark Side!

or maybe "One Grinder to Rule them All"

With a Monolith Flat on order, I feel like I just got a big brother, and Mike you wrote a great story. Appreciated reading it, and it is fun to see innovators innovate. Congrats to you and all who will get one. Michael
CarefreeBuzzBuzz
___
Artisan Quick Start Guide
http://bit.ly/ArtisanQuickStart
Top

Denis, please put me in line for one of these . It is just what I have been wishing for! You have checked all my boxes with this one.
Suffering from EAS (Espresso Acquisition Syndrome)
LMWDP #586
Top

I had stopped thinking about new grinders until I saw this!
LMWDP #602
Top

I know the feeling.
Top

Where can I put money down?
Top

kwantfm wrote:I had stopped thinking about new grinders until I saw this!

Wow. My Flat is supposed to be here next month. With the shorter conical and this EK43 killer, now I want to get a connical and a flat max! Grrrr
Top

mivanitsky wrote:A long time ago, in a galaxy far, far away...

How much better is the pourover and French press on the max compared to the regular flat?
Top
← Back •
By accessing this site, you agree to the site's terms of service. If you need help with the site, please contact us.