Titan Grinder Project: Can it Beat the Mazzer Robur? - Page 5 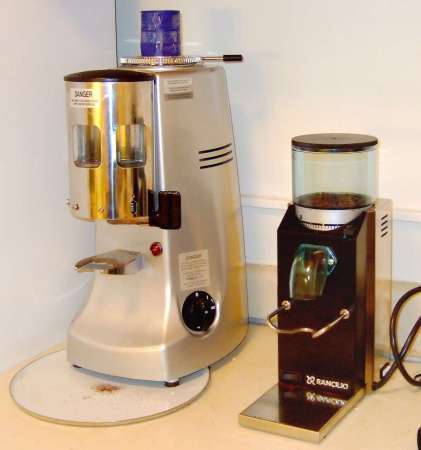 The Rancilio Rocky is the most popular semi-commercial grinder among espresso enthusiasts by a long way; and it is easy to see why. It is internally identical to the commercial MD40 model, it feels very solid, and runs fast and quiet. All this for a price about $100 less than any small commercial grinder. I received the doserless model from Jeff Sawdy to try out, and even in this configuration, it runs quickly enough, around 1 second per gram, not to strain ones patience when doing a double shot. Finally, it has very little of the dreaded "doserless clumpfest." The grinds are about as usable as those from doser flat burr models.

However, this grinder has a small burr size, 50mm, and shorter grind path, 6.6mm, than even the Mini's 7.1mm. The burr size, and especially the length of the grind path, have been good predictors of how well a grinder will do against the Robur; so the short one makes it a distinct underdog.

In the first two rounds, at 16.5 gram doses, the Rocky produced what I think of as over-dosed and under-extracted flavors, rough, not sweet enough, not creamy enough. In addition, there was a lingering bitterness in the aftertaste. The shots weren't horrible, or even bad; I had tried some on their own prior to testing, and thought them average. But compared to the Robur's, they came up very far short. The Rocky had better crema on the second round, but was still 12 points back after two rounds.

In the third round, at 13.5 grams, I got a surprise when I flipped over the IDs: the Rocky produced the creamier, more rounded shot. It was hard to decide whether it was a difference in taste or mouthfeel, so I scored it a half point each. The Rocky takes back 4 points going into the final round. Will it rival its namesake?

In the final round, also at 13.5 grams, one shot was massively seductive, a lot creamier and sweeter than the other, winning the round by a whopping 8 points. When I flipped over the IDs, it turned out to be the Rocky. I was shocked, but after the 3rd round, not all that surprised. So in true movie fashion, the Rocky comes in dead even, getting knocked out in the first two rounds, and delivering knock outs in the second two.

The Rocky has been in several grinder comparisons, and has always lost against the Mini and the Innova/Lux style conical grinders. This is not surprising, since the testers were making 17 to 18 gram doubles, and the Rocky pretty well sucks at that dose, the worst of all grinders tested. The big news for Rocky owners is that it is an absolutely terrific low dose grinder, the best of the group tested so far. So if you own one, get yourself used to making 12 to 14 grams shots. For prospective buyers, it's harder to give advice. Most Silvia/Rocky buyers seem to be looking for Vivace like shots; and this setup isn't even going to get into the same zip code, never mind close. But the Italian sized doubles from this combo were, quite simply, great.

BTW, these shots were made at a setting 1 click above the burr-touching zero point.

another_jim wrote:So in true movie fashion, the Rocky comes in dead even, getting knocked out in the first two rounds, and delivering knock outs in the second two.

Well, that was a surprise! Just FYI, the burrs are brand new, I only ran about 1/3 pound of Paradise Roasters S.O. India Sitara through them before Rocky went to Chicago. I was at a very fine grind setting as well, but I had attributed that to the robusta.
Jeff Sawdy
Top

In the actual contest with my test blend, which is less bright and heavier bodied, the difference wasn't as marked. The Pede did lose every round on flavor, but it wasn't a blow out except the 3rd, where it lost by 1.5 points. The others were all close 1/2 point rounds. The final score was all rounds to the Robur, with 13 points total.

I'm not sure this was a fair fight. I own several hand grinders, mostly Zass. Some of these grinders can run circles around my Mazzer Mini and some of them can't hold a candle to it.

To make this fair, several different hand grinders need to be in the test.
LMWDP #017
Kill all my demons and my angels might die too. T. Williams
Top

I've been playing with Major vs. Kony here in my kitchen to try and taste for myself how a monster flat burr stacks up against Robur's little brother. I wonder how the Major would fare against your Robur in this series. Any chance you could drum up a Major there in Chicago land to run in the 'Beat the Robur' sweepstakes?
Top

The blind tasting scheduled for today fell through; so without further ado, the final Robur bout: 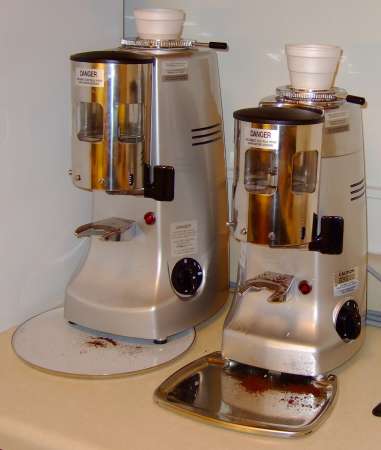 The Kony is the Robur's little brother; except it's not so little. Although it is a 62mm conical like the Macap MXK, it has a beefier, 500 watt motor and comes in a larger body. It is as large and heavy as other manufacturers' 68mm conicals. However, it isn't nearly as fast; the grind speed is a bit faster than the MXK, but it is far slower than the 68mm conicals, the Jolly or the Max.

Several amateurs have bought the Kony as a grinder at the limit of domestic usability. From these early adopters a curious story has been making the rounds. The Kony is an awesome grinder, 100% crema, totally consistent, but BRIGHT, very very bright. This impression has been shared by the Titan grinder testers. Today is my first day with the Kony, and I've thrown it right into the beat the Robur stakes. Will it get sour-pussed right out of the ring?

The first two rounds, at 16.5 grams, confirmed all the stories about the Kony. The crema had a consistent edge over the already excellent Robur, coming out a hint redder, a hint more flecked, and a hint deeper. It did this like clock work, in all four rounds. At 16.5, the Kony was more acidic. It was also less sweet than the Robur. I gave it a half point edge, because the acidity was pleasant, and the flavors and aromas more detailed.

The story changes in the second two, 13.5 gram rounds, where the Kony tasted flat, both less sweet and less acidic than the Robur. Because of the edge in crema appearance, the Kony drew the Robur both in rounds and points despite getting an overall lower taste score.

My early conclusion is that the Kony may be workable by dose for acidity, with down dosed shots being less acidic. However, the grinder may have a dryness problem. I found the consistently slightly less sweet shots puzzling.

It should be noticed that this is not a bad grinder; in fact it is a very good one indeed. But people expecting the profile they got from the Robur or the 68mm conical at their local cafe or roasterie lab will be disappointed.

Wow, Robur and Rocky with the same score, I can't believe it.
Top

Nor can I. But that's why they actually play the games -- long shots occasionally do win.
Jim Schulman
Top

another_jim wrote:So if you own one, get yourself used to making 12 to 14 grams shots.

yeee-hah! it's a good day for pavoni owners, what with our (ahem) small baskets!

p.s. thanks for curing (well, maybe delaying) my upgrade-itis to the mini...
Derek
LMWDP #139
Top

Referring to test of the PeDe hand grinder, Fullsack wrote:


I'm not sure this was a fair fight. I own several hand grinders, mostly Zass. Some of these grinders can run circles around my Mazzer Mini and some of them can't hold a candle to it.

To make this fair, several different hand grinders need to be in the test.

I purposely sent Jim a well-used grinder, to be sure that it would represent one that someone could get from an Ebay auction for ~$50, and sometimes for less. I bought that particular PeDe 3-4 years ago, and it has seen daily use since. About once a year I disassemble it, brush off the burrs, and grease the one ball bearing. Considering it was probably around 50 years old, I'm willing to concede that it may not quite keep up with the Robur anymore. I've posted some videos of just average shots I've pulled with it and my spring lever machine:

I asked Jim to run these tests because I'm often asked about hand grinders, and I've never used a good electric grinder. I'm now convinced that they represent a great value for someone who wants to brew good espresso, but who does not want to spend $200+ for a good electric grinder. I can assure you that the La Pavoni PA electric burr grinder ($50 new) I had is a POC compared to any reasonable hand grinder.

And, after all, it not whether you win or lose, but how you play the game, right? Hand-grinding coffee is almost as pleasurable as drinking it - maybe Jim needs to add a column or two for aesthetics....

PC
LMWDP #049
Hand-ground, hand-pulled: "hands down.."
Top
← Back •
By accessing this site, you agree to the site's terms of service. If you need help with the site, please contact us.