Titan Grinder Project: Can it Beat the Mazzer Robur? - Page 2

Grinders are one of the keys to exceptional espresso. Discuss them here.
← Back to Grinders • 100 posts •

RapidCoffee wrote:But take this with a grain of salt. For one thing, Jim is undoubtedly a far better cupper than me. For another, we may simply have different taste preferences.

* I'm pretty sure the "small Macap" is the MXK model, with 63mm burrs.

In the review, we'll get all the boilerplate stuff right, I hope; for the thread, I'm going off memory (in the fond hope that there's not some knockoff MXK out there that somebody might buy).

As I said, in this round, all eight shots poured perfectly, and all eight would have had ratings of 3.5 to 4.5 in competiton (the Silvia won't make it to 5 unless lightning strikes; I was sorry I hadn't pulled some of these on the Semi). So my giving the nod to the MXK is partly subjective, and part that my blending and roasting style have adapted to using the M3, which is a similarly bright grinder. The blends key components are the Biloya for acidity, the Aged Sumatra for bright bitters, the Cenaproc for sweetness and caramels, with the Ismaili and Brazil doing the chocolate and kola nut back beat. The balance I'm looking for in the tests, is that between the three front ingredients. The Robur tends to emphasize the sweetness and the two background components (although not as much as the Mini, from which the blend tasted slightlly flat and comfort food-ish); this is the Robur's vulnerability, where a slightly brighter grinder can beat it, if it produces perfectly balanced shots.

Dave and you are set up around the SJ, which sounds as bass dominant a grinder as the Mini. To you, the MXK would tend to taste too bright for your regular blends and pulling technique.
Jim Schulman
Top 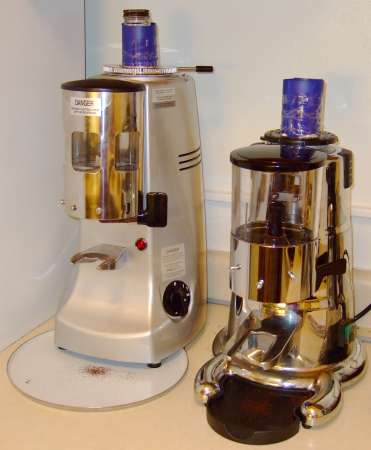 We are now entering the true titanomachia. The Kony and MXK are the conical equivalents of the Mazzer Mini, that is, decaf or catering conicals. The 68mm conicals, like this Macap M7K, are grinders built to service three and four group bar machines. The grind speed is about the same as the Robur's, that is, ridiculously fast for home use, with a double being done in 5 or so seconds.

The Macap is not as tall or heavy as the Robur, and has the lightest motor of the 68mm grinders, only 350 watts, same as the MXK's according to the faceplate. However, it runs louder than the MXK, especially at startup, and is larger than the Super Jolly or other 64mm flat grinders, since it is housed in an enclosure roughly the same height as the Mazzer Major or Macap's large flat burr machines. Despite this, the usability of this grinder is as good as the MXKs. The version I'm testing has click stops for the grind adjustment, rather than a worm gear. Given the much wider travel required to set conical grinders, this does not impact the ability to set the grind to the exact pour one wants. As with all Macaps, worm gear versions are available.

Just as yesterday, the testing was a breeze. These grinders operate ultra-consistently. Three pours had completely identical pour times, in the fourth, they were 3 seconds apart.

These may be top Italian grinders, but they may as well have been 1980s Italian soccer teams for all the excitement this match generated. The shots looked and tasted identical, and in order to generate any scores at all, I had to get really picky. Based on this, I gave two rounds to the Robur, and one to the Macap. In the final round, nothing I tried yielded any sort of difference between the two shots. Other grinders got close in scoring to the Robur, but this is the first time where the entire taste experience was well nigh indistinguishable. These grinders are on exactly the same page when it comes to taste profile. My score sheet gives the Robur a 3 point, and 2 to 1 round edge, but trust me, nobody will ever tell these grinders apart under normal tasting conditions.

I have to admit I'm not enamored by the M7K's style: it's big without being imposing, and it starts up noisy. But if you want the consistency and taste profile of a Robur, and are on a budget, this one is definitely worth a very long look.

All the grinders being tested have reputations for making excellent espresso, which turn out to be deserved. Also, the scale I'm using, based on the steps in Barista competition, makes a point a distinct difference, 2 points a large difference, and 3 points a whopper. In retrospect, I should have used a finer scale, since I'm rarely seeing more than 1/2 point differences.

The Titans are distinguishing themselves slightly on grind quality, but more on the intangibles -- they are rock solid consistent and steady. At this point my jaw would drop if I got a sink shot from any of them. When Intelly switched from the LM Swifts to the Robur, because they found the Roburs more consistent, I didn't see how this was possible -- how could a conventional dosing grinder be more consistent than something that dosed and tamped automatically? Now I understand. I've never used the large 64mm or 72mm flat burr grinders, so I don't know if this shot making reliability is something they also have.

My leg of the testing is mostly about gauging differences in shot and taste quality, and not so much ergonomics or consistency. My shot making practice is too improvisational for me to be a good judge of these. But in some sense, this leg has been a dud, since the taste differences are so minor. I'm guessing the final review will focus more on the process of using the grinders, where most of the differences lie.
Jim Schulman
Top 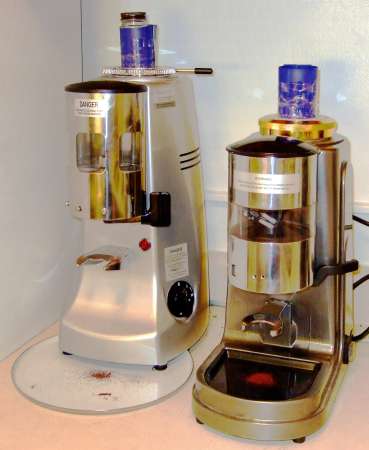 There's a lot of Italian grinder companies whose name you probably don't know despite seeing their grinders in cafes every day. Companies like Bregant, Casadio, or Eureka mostly produce grinders that are badged and sold by espresso machine manufacturers. Fiorenzato was a grinder company in this style until they started producing their own line of machines; now they market their grinders under their own name. The Doge Conico is their flagship grinder, a 68mm conical with a 500 watt (2/3 HP) motor. This is a very impressive grinder. The case is as well finished as the Mazzers, the doser is perhaps the best and cleanest I've used, and the burr carrier is beautiful -- a springloaded, floating system, like the Mazzer, that is made of polished brass, and which, unlike the Mazzers, turns easily and smoothly. My only caveat is that it lacks a motor starter, and there's about 2 seconds of loud clatter when the motor starts.

Another Italian soccer match. The cup profile of the Fiorenzato is indistinguishable from the Robur's, and I was grasping at the least hint of difference to score the rounds. The Robur took two on flavor, since there was a hint of astringency to the Fiorenzato shots. For all I know, this is due to the grinder not having been used much during this testing process, and the burrs still being unseasoned. In any case, the Robur took two rounds and the match by half a point, the Fiorenzato took one round. One round was a tie, with indistinguishable shots.

Based on the performance of the Fiorenzato today, and the big Macap yesterday, the buzz surrounding the Robur appears to me to be slightly undeserved. These two big 68mm conicals perform just as fast and just as well; and the same probably applies to the versions produced by other grinder manufacturers. The 3 phase Robur may edge them out, but all these conicals come in 3 phase versions, so even that may be a wash.

another_jim wrote:The Robur took two on flavor, since there was a hint of astringency to the Fiorenzato shots. For all I know, this is due to the grinder not having been used much during this testing process, and the burrs still being unseasoned.

I wonder if this could explain the less than stellar cup I got from the Kony. Could the harsh/bitter experience I had be due to grinder break-in? I tried to run a lot of coffee through the grinder to break it in and season the burrs. I ran somewhere around 8-10 pounds of coffee through the Super Jolly and Kony. More than half of that was run through the Kony. I would guess 6-8 pounds.
Dave Stephens
Top

I wondered the same thing about the Macap MXK, especially after Dan mentioned a similar break-in experience. I got the Macap new, and only ran 2-3# through it. Why would a grinder need more than a few seasoning shots to grind optimally? I dunno. Maybe the burrs need time to seat properly.
John
Top

I was ready to hit the supermarket for a big bag of Stewarts (a local mass market coffee with no objectionable taste) to run through the grinder if there was anything obvious. What I got was so subtle, I didn't know what to make of it -- the barest hint in the initial hit of the coffee on the tongue. After that, it was all the same. There was no point in even taking a second taste, whatever the difference, it was well below my threshold of tastebud fatigue, and the second sips tasted totally the same.

I should have explained this for the last two tests of the Doge and the M7K -- the half point differences mean I can't taste them on the second sip, so that they are frustrating, like seeing something out of the corner of ones eye, but not when looking at it full on.
Jim Schulman
Top

So glad to see that you gave the Lux a decent score. I use an Isomac branded one with a 1 group machine and the shots are great. Sure the build quality isn't the best and the adjustment pin is so flimsy it's ridiculous and the noise, arghh the screaching noise of the motor is enough to have the neighbours cats thinking they are in for a bit of action...

But it does grind extremely well and produce great coffee. It's important for people to keep an open mind and not believe great espresso can only come from the best equipment money can buy.

Some book keeping on the scores:

I hate to do post-hoc revisions; but in order to keep the scoring comparable, I must revise the scores of the first three grinders. I've added a half point to the flavor category whenever the winning margin is 0.5 and 1 point (the higher scores are unaffected).

There's an additional reason for doing this. People are curious how their regular home grinders would fare, so I'm getting in a Rocky and a Zassenhaus, two popular home grinders after the rounds with the Titans are done. I'll be scoring them on the revised scale, so the earlier grinders need to be corrected to keep the comparisons of the domestic grinders on the same page.
Jim Schulman
Top
← Back • 100 posts •
Sponsored by Baratza