Terminology question: What are 'visible fines'?

I've been spending some time on this site over the last day or so and realising how little I know about coffee despite making espressos at home for the past 10 years. I doff my portafilter to all the experts.

My lovely Gaggia Classic Coffee reached the end of its days recently and I replaced it with a VBM Piccolo. I'm giving serious thought to upgrading my Isomac Professionale to a Baratza Vario or Preciso. I've read a lot of reviews and one piece of terminology keeps cropping up: 'visible fines'.

Now this may be the dumbest question ever asked on this forum, but what are 'visible fines'?

And, BTW, if anyone wants to throw in their thoughts on the Baratza as a poor/good/great choice, I would greatly appreciate it.

Every grinder, to one degree or another, shatters the beans. This fracturing can cause very fine partials (hence the term, "fines") of coffee grounds that are much smaller than the desired grind level.

The common belief is that fines are bad. That's mostly true. Without SOME fines in a grind the puck would lose a great deal of cohesion because nothing would be filling the space between the grounds that are at the desired grind level. So really, fines are bad when you can tell they're there.

I think that learned that second point from the folks at Sweet Marias in the below video, but I'm too lazy to watch the whole thing to confirm that it's the source.


Spoiler: show
«missing video»
If your tiny coffee is so great, then why don't you drink more of it?
Top 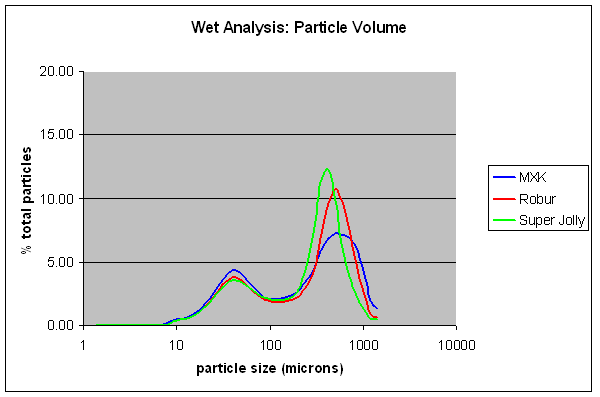 Grinder burr types explained shows the burr sections responsible for bean breaking and fines. While not shown in the linked explanation, grinder burrs for drip coffee have a huge coarse grind section and a mere sliver of a fine grinding section so the grinder produces a single peak. Back to the original question, the term "visible fines" is applied to coarse ground coffee for drip/press/pourover where the ideal is uniform coffee particles and powder/fines are evidence of an inconsistent grinder.
Dan Kehn
Top

JayReyMe wrote:... what are 'visible fines'?

As noted above, grinders do not produce one size of coffee particle, they always generate a distribution of sizes. For espresso, a bimodal distribution appears to be desirable, with most of the particles around 400u in diameter, but some only a tenth that size. The smaller particles are called fines, and apparently help to regulate flow through the puck. For non-espresso brewing, a unimodal distribution is considered better. Too many fines can clog a paper filter in drip brewing, or pass through the metal sieve and yield a muddy cup in French press coffee. Fines may also overextract and impact negatively upon taste.

I'm not sure why anyone wants to qualify the term "fines" with "visible". You may not be able to distinguish individual particles with the naked eye, but they're not invisible.
John
Top

RapidCoffee wrote:I'm not sure why anyone wants to qualify the term "fines" with "visible". You may not be able to distinguish individual particles with the naked eye, but they're not invisible.

I think that "visible" in this case is intended to indicate quantity and not size.
If your tiny coffee is so great, then why don't you drink more of it?
Top

RapidCoffee wrote:I'm not sure why anyone wants to qualify the term "fines" with "visible". You may not be able to distinguish individual particles with the naked eye, but they're not invisible.

I was mystified by the "visible" term too. Until I've read Dan (HB) post that clarified it for me. I think the term in Drip/Press/PourOver is important since IF you are able to see fines, if you are having visible fines, then that will be an indication of an undesirable grind.

Many thanks to all of you for clarifying 'visible fines'. The other obvious outcome is the more time I spend on this forum the more I realise how large my knowledge gap is. There's a lot to learn and I seem to be in the best place to learn it.

Brief update: was close to purchasing the Vario but plastic and digital displays lost out to the joy of seeing a Mazzer Mini on the kitchen bench. In my case, when it's form vs. function, form tends to win. I hope I made the right choice.
Top
← Back
By accessing this site, you agree to the site's terms of service. If you need help with the site, please contact us.