This is a report on how I resolved the 48 position grind collar limitation on my Rossi RR45.

Three or four years ago I bought a used RR45 on Ebay for about $90 including shipping. It was a great deal except for the rancid coffee residue. After an obsessive cleaning, I used it happily for another couple of years with a Rancilio Lucy (The Lucy is a Silvia with a Rocky grinder all in one cabinet). Even with the original used burrs, I thought it was better than the Rancilio Rocky. Probably my opinion of better was simply because the RR45 doser breaks up clumping in the ground coffee and eliminates(?) the benefits of the WDT...

Last winter I replaced the burrs when I could not get the grind right. It was either too coarse or two fine. Replacing the burrs helped for a while, but the too coarse or too fine problem re-occurred this past summer when I upgraded from the Lucy to an E61-HX machine, so I decided to resolve the 48 position adjustment ring problem. Because the 80 position ring was on back order, I took my usual obsessive approach and designed/built an infinitely adjustable clamp to clamp the upper burr in place. See pictures...

The results of this modification are very pronounced. I can now adjust the grind setting to any value I want. No fighting the too coarse or too fine problem and possibly more significant, the looseness of the standard pin adjustable grind collar is gone. Prior to my modification, when the pin was seated in the adjustment collar I could feel a small amount of rotational play in adjustment collar. After my modification there is NO rotational play - the upper burr is clamped tight. The difference in the lack of rotational play is very noticeable in the sound of the grinder during operation. The grind sound now is a more pronounced single note rather than the wide band noise prior to the modification. I suspect the loose grind collar was rattling slightly during grinding causing the wide band noise and a greater range coffee particle size.

When it is all done, the real question: Does my espresso taste different?
I think yes. I think improving the grind consistency has brought out some flavors / qualities that were hidden prior to this modification.

If you would like more details regarding this modification please send me a private message. 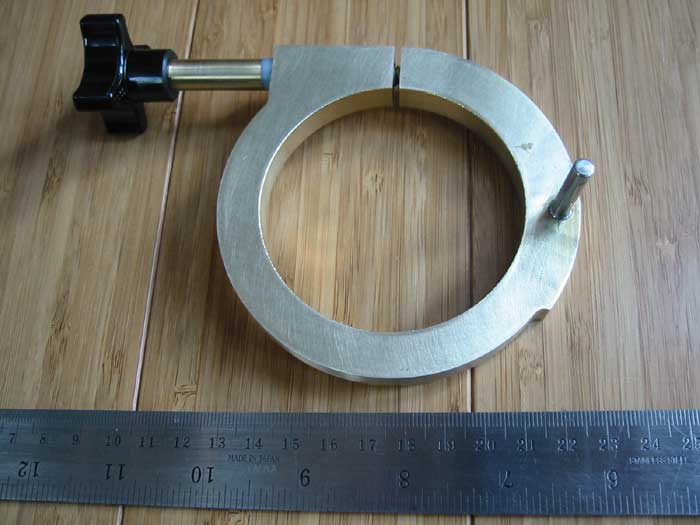 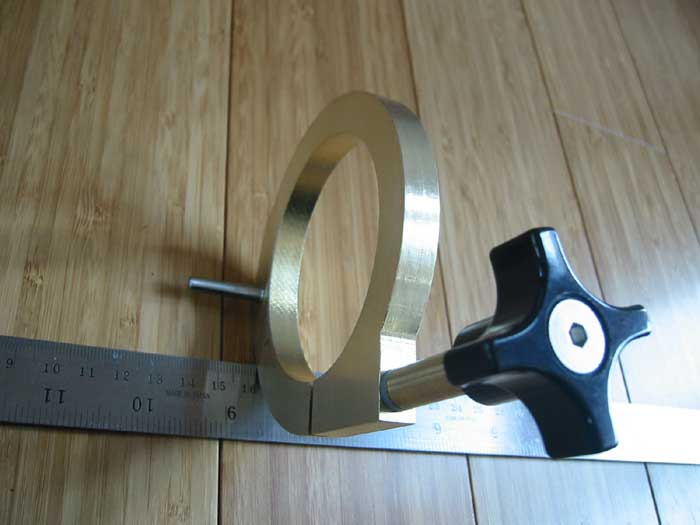 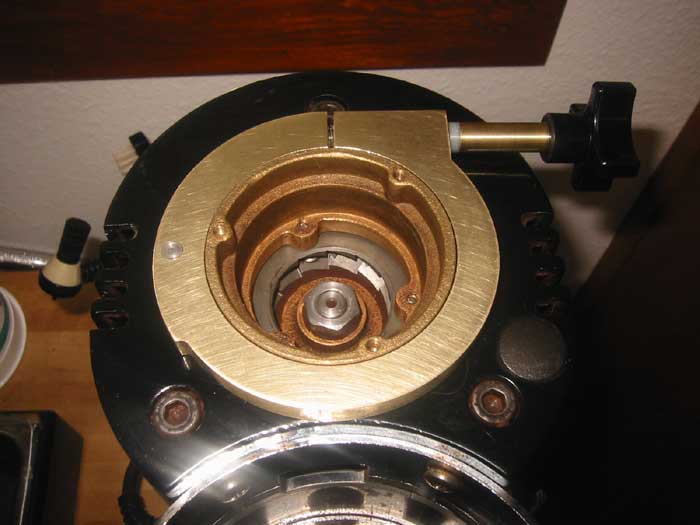 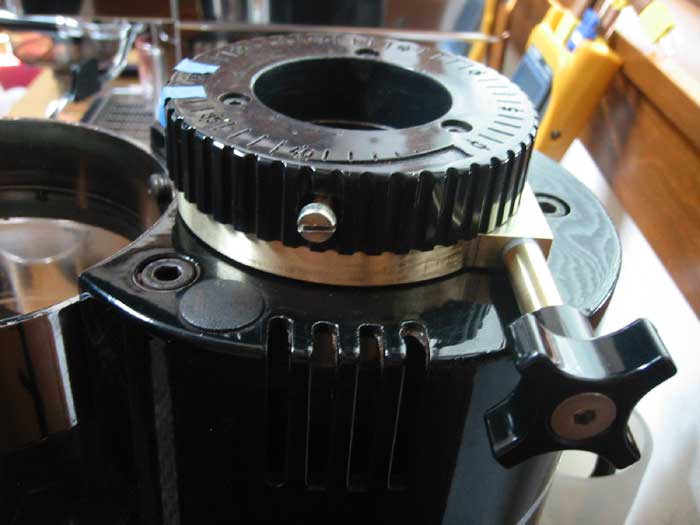 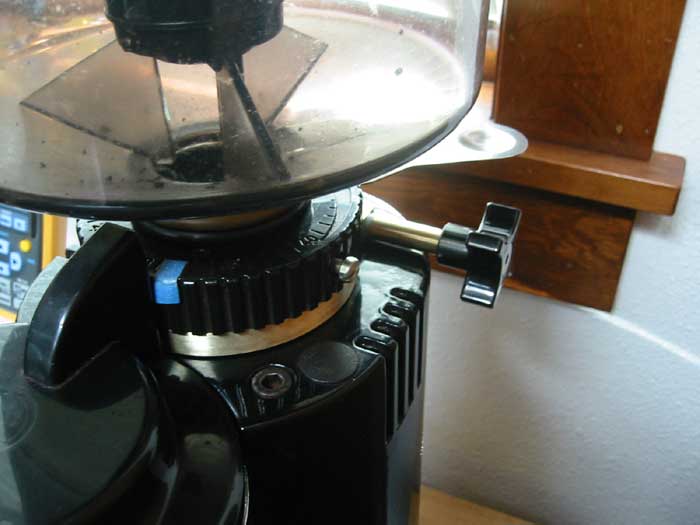 Very nice looking work you do.

I have a comment. Actually a question. Why can't I build things like that?
Scott
LMWDP #248
Top

Ok, I had a little problem with resetting the grind to a previous setting. How do I go back to where it was set yesterday?
So another hour in the shop with a rotary indexing table, a black sharpie and some rub on lettering and I have a vernier scale on the clamp. Now I can repeat to tenths of each 1/48 revolution.
Obsession... 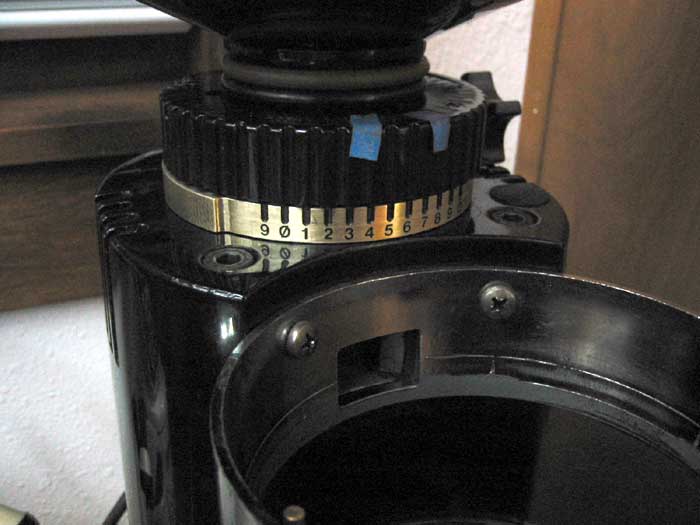 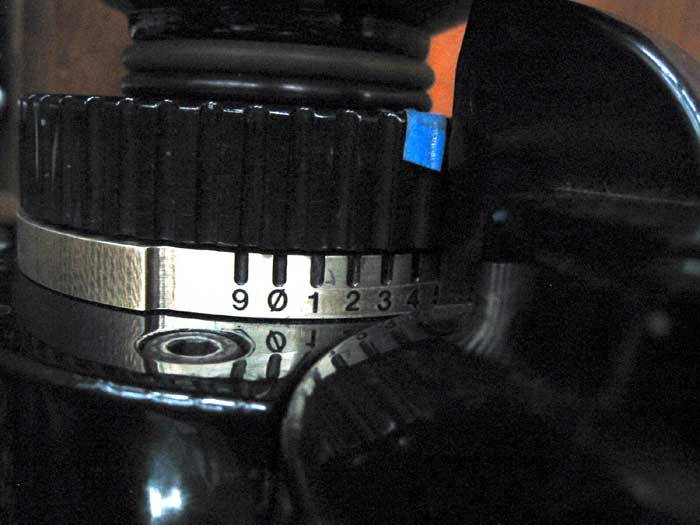 We are not worthy! In fact, I'd say it's much nicer than a much more expensive grinder: 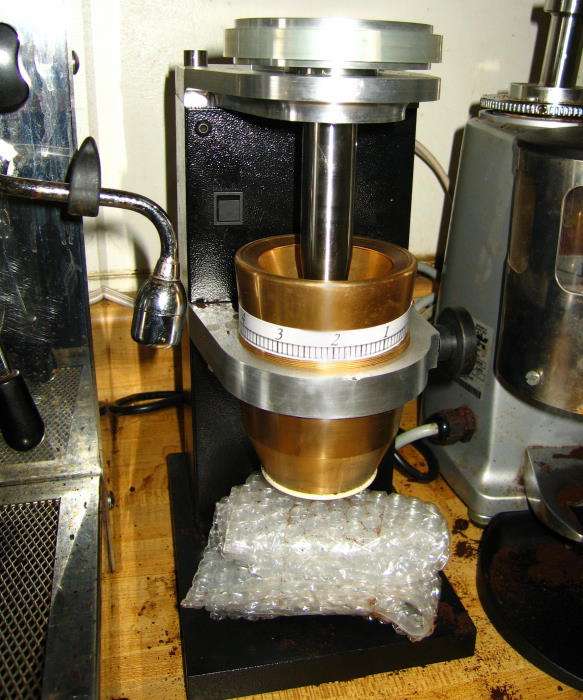 I replaced the 40 step adjustment ring and the adjustment pin with the 80 step ring and pin from the RR45A or RR45CC.
This works quite well and solved all my grind problems
Top

Another Approach to Rossi Adjustment Modification

I don't know if it's proper protocol to add to this thread or start another. If it should be another thread, please, moderator, create one for me.

Anyhow, I used a different approach to accomplish the same thing. Mine isn't better, but given that I don't have a mill or a cnc machine, just a ye olde lathe, it was much easier for me. I removed the spring loaded pin and rather than using that pin socket as an "anchor", I used an approx 1/2" hole that is located to the right of the center of the grinder. This hole is covered with a plastic cover and I have no idea why it is there, but it works well as an anchor.

All I did was turn a tenon (off center using a 4-jaw chuck) to fit into the hole (no attachment) and drill a hole to take a stainless steel allen head screw of the correct size. While I was at it, I replaced the other two screws which were getting a bit rusty. Then I made a knurled handle which I pinned onto a 1/4" SS threaded rod. The rod fits into a brake shoe made of a piece of hockey puck (this isn't pictured). Anything including an eraser would probably work.

I've been using the mod for 6 months and it works well; no slippage, instant continuous adjustment and it dampened the vibrations resulting in a quieter (still too noisy) grinder. I use the existing scale since there was no reason to change it.

If you look at the pictures you'll see another mod as well. I removed the grubby hopper and put in a purple plastic tube of the correct diameter. It has two o-ring slots let into it-- one pictured and one at the bottom of the tube which locks it into the grinder. This works well (with the tamper made from a piece of firewood).

A couple final notes: I clean the grinder if it hasn't been used for half an hour. First I use that rocket shaped air blower (see pic) that is available from photography suppliers. It works much better than CO2 or other compressed air. The blast has lower velocity but higher volume and when blasted into the square hole while the grinder is on, it does a very good job of getting rid of excess old coffee. Then I take that large paint brush and brush the doser as I flip the handle, removing most of the residual coffee.

I should mention, that I admire the original poster's solution; it probably is better or at least prettier than mine. But the grinder itself is pretty ugly, so maybe mine is in the same spirit. 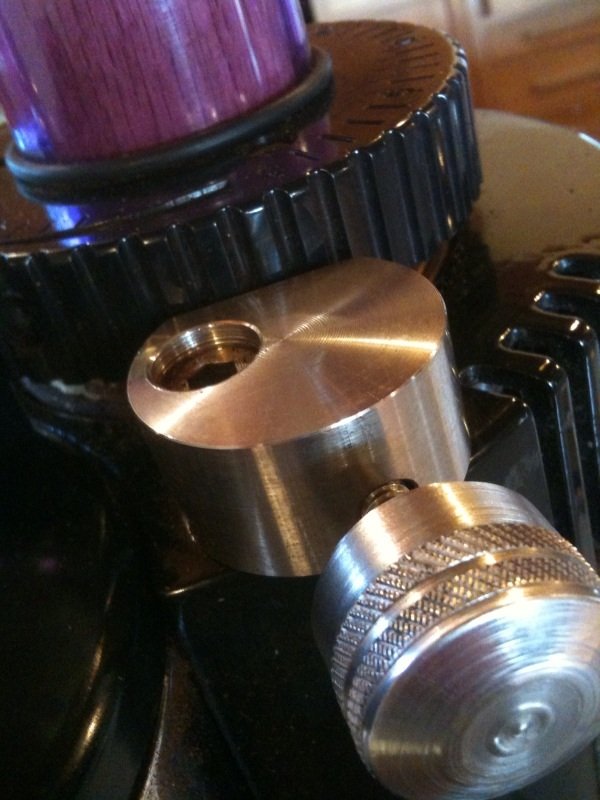 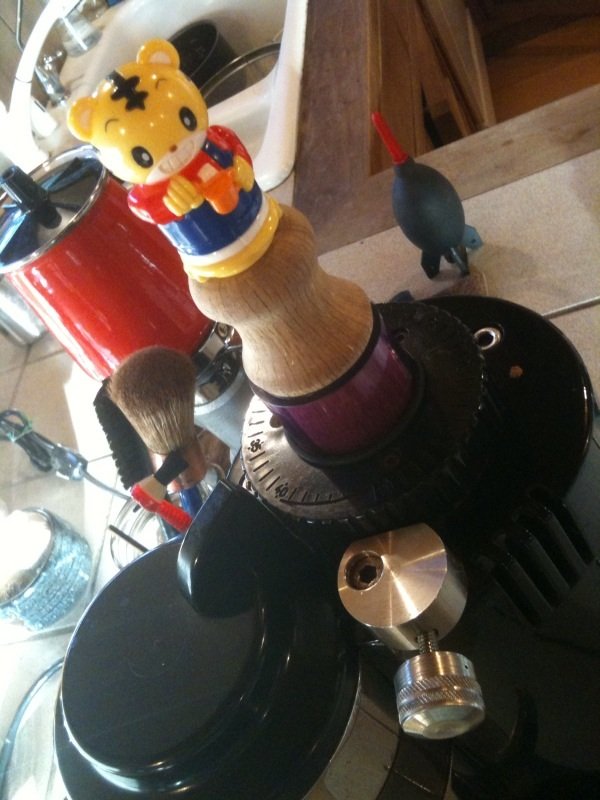 UPDATE: I sold my Rossi, having gone to hand grinders, but I thought I'd offer the following for anyone who wants to make their Rossi step-less without having to do anything much:

1. Take the burr assemble apart and remove the pin (and spring) that pops up and goes into the holes in the numbered black plastic ring. Now you have a step-less grinder. The problem is that the ring will turn while the grinder is grinding.

2. Get a pen with a rubberized grip that will serve as a wedge between the above plastic ring and the grinder body. This wedge will keep the ring from moving. I used a pen for quite awhile. A rubber eraser trimmed to the shape of a wedge and wedged in that spot would work just fine. I used a piece of hockey puck as a wedge and it worked fine as well. Keep the pin and spring and if you want to get rid of the grinder you can return it to stock.
Top

And maybe more off topic, but you're comment about the rocket shaped blower made me think about this:

Available at Home Depot in the Hilti section of the tool department. Intended for blowing cement dust out of freshly drilled holes before epoxying in studs. Sadly it's not much use on my M4D, but it does move a lot of air. It's 8 inches long, I guess I reduced it so much it's hard to see now.

trzynkaa, beautiful work. Any chance you could be commissioned to make another of that clamp?

Adam
Top
← Back
By accessing this site, you agree to the site's terms of service. If you need help with the site, please contact us.