Lido E arrived today. The box had been thoroughly smashed by USPS (who also delivered 3 days after their estimated delivery date) but to the Lido E's credit, it survived what seems like a very abusive transit without even a single scratch on it.

It actually feels a bit lighter than the Lido 3 in the hand, but a scale verified that they are in fact the same weight. 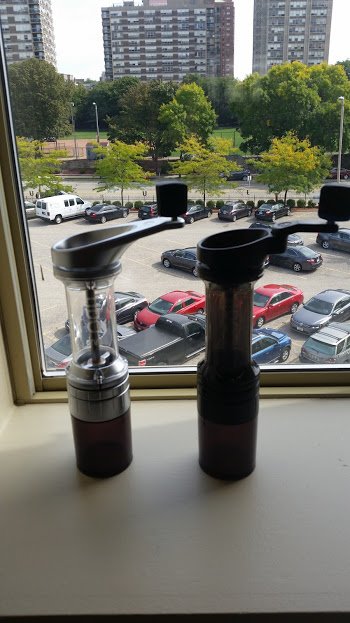 The part-swap manner in which the Lidos were engineered is pretty cool. The "extra" bearing piece right above the burr set looks almost exactly like the bearing right under the handle, I could probably install it right on the Lido 3 to get a 3rd bearing there if I wanted. 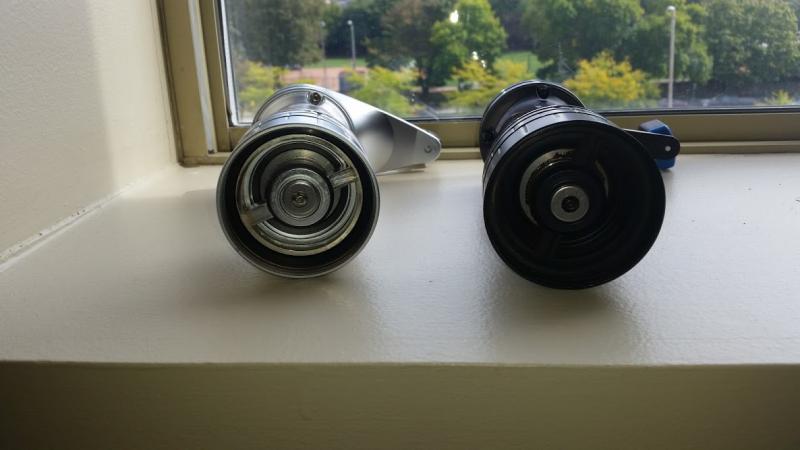 The grinder arrived perfectly aligned. The first thing I did after unboxing the Lido E was to set it right at the bottom of espresso range; 4 marks from zero. The espresso range goes from 4 to 8 marks from zero according to the instructions. No burr rub whatsoever. The handle swings freely and the only noise I hear is a little rub from the bearing which will probably go away with some use.

They also sent an insert about their "vortex" maneuver for easy and quick grinding. It seems very natural and its what I do for grinding lighter roasted coffee. I ground through 16 grams of "cinnamon" light coffee almost effortlessly.

The finer adjustment range is awesome. I've found that dialing in light roasts can be finicky and the ring adjustment, while still cumbersome for those still getting used to a ring style adjustment, is much easier to make micro adjustments on than on the the other Lidos.

I was already a fan of the Lido 3 and the third bearing and the finer adjustment effectively removed my only two gripes about it.

The taste? Great. I know from my other Lidos that I have to grind through a few pounds of coffee to fully season them but the Swiss burrs on the E and 3 really outperform their "size class" in my opinion.

The dosing cone looks cool, but I haven't really had a need to try it yet, I usually dump the grounds straight from the catch cup into the portafilter with the OE 58mm dosing funnel over it.

Any negatives? The handle. The Lido 2 with its metallic-ness and its glass catch jar is a very beautiful and aesthetic piece of "functional art". But the foldable Lido 3 handle quickly grew on me for its sheer convenience.
As far as color goes, I like the shiny, but the dark antistatic catchcup looks a little out of place on the bottom of the shiny grinder. It looks a lot more natural with the Lido 3 color profile.

Thanks for posting. I'm resisting buying one of these to add to my collection, but I'm not sure how long I can hold out...

Re: the folding handle, I asked Doug & Barb if I could buy a spare L3 folding handle for my L2, and what they sent was apparently the only *non-black* [metal] folding handle in existence. I sincerely hope they offer it as an accessory in the future because I love the look and the light weight; something like it would eliminate one of the quibbles you mentioned with the E. 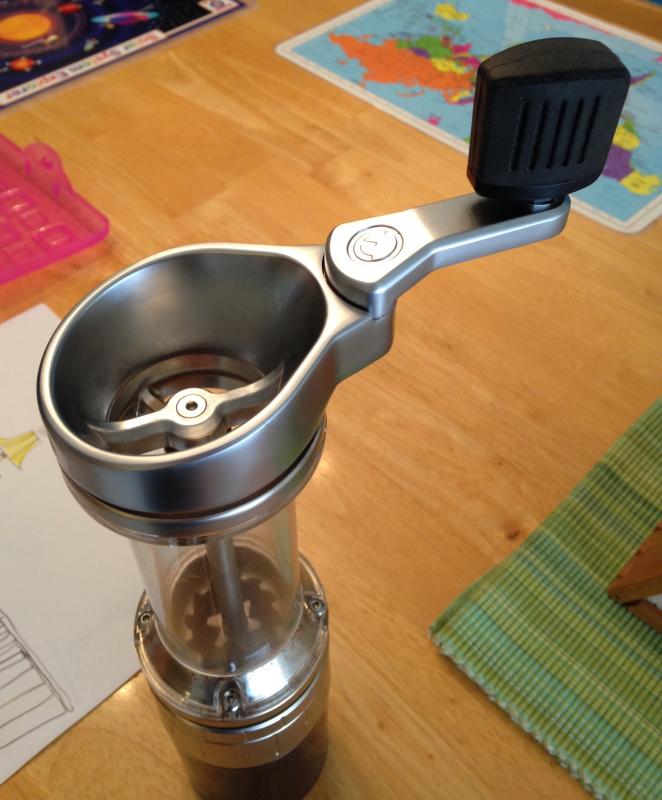 Edit: changed the handle color descriptor to "non-black" in order to avoid confusion. This one's made of chrome-plated aluminum.
"It's not anecdotal evidence, it's artisanal data." -Matt Yglesias
Top

There, I hope that works.

Hi dominico. Can you try grinding a few grams for french press to see how it is? I know that this is marketed for espresso
but I'm just curious if it can do it as well. Thanks
Top

That metal folding handle ... oh my, that is nice!

There, I hope that works.

LOL. Good luck with that. Try to convince yourself that a hand grinder with a bearing on top of the burr needs a stirring pin like the Hausgrind. (FWIW, there are two walnut Hausgrinds available at the moment.)
What I'm interested in is my worst espresso being fantastic - James Hoffmann
Top

I'd also like to hear about its drip grind capabilities, any difference from the 3? Besides just having to move the adjustment ring farther?

I agree about the folding handle, though if the E came with it I wonder if the 3 would be obsolete. Also the 2 for that matter. Why do they make 3 different Lido's again?
Top

jbviau wrote: Re: the folding handle, I asked Doug & Barb if I could buy a spare L3 folding handle for my L2, and what they sent was apparently the only *metal* folding handle in existence. I sincerely hope they offer it as an accessory in the future because I love the look and the light weight; something like it would eliminate one of the quibbles you mentioned with the E.

That handle... That handle is EXACTLY what I want! With that, my hand grinder journey would be complete

As it is, I've just decided to put my Lido 3 handle on my Lido E and travel with it like that until I decide what to do with my Lido 3. Just a clarification on the handles though, they are both metal, but the Lido 3 is painted black and the Lido E is a metallic looking color; whether a finish or its natural color I do not know.

As far as grinding for drip and Press goes, it uses the exact same burrs as my Lido 3 so my guess is that they are fine, but I will grind up some stuff for the Aeropress and French press tomorrow, try them out, and take some pics for all of you that enjoy staring at super zoomed pics of ground coffee...

I also wanted to mention, I re-read their description of the "Vortex" maneuver and it clicked, when they say place it on your hip I realized that they are describing something akin to what I've been calling the "Captain Morgan" stance I use for light roasts, because I like to put my foot up on something 8 or so inches off the ground, stick the catch cup into my "hip ledge" I've created, and grind in a bicycle motion from that stance.
http://bit.ly/29dgjDW
Il caffè è un piacere, se non è buono che piacere è?
Top

dominico wrote: As far as grinding for drip and Press goes, it uses the exact same burrs as my Lido 3 so my guess is that they are fine, but I will grind up some stuff for the Aeropress and French press tomorrow, try them out, and take some pics for all of you that enjoy staring at super zoomed pics of ground coffee...

Looking forward to it dominico. Thanks

Thanks for sharing your thoughts on the lido's ! This is already very helpfull! What do you think, if I don't have a lido now, which of the 3 lido's would you recommend to buy. Is the Lido E THE grinder for filter and espresso? And what about the burr rub with the lido 3 vs the 2 and E?

Is anyone noticing beans catching in and around the extra bearing crossbar? I seem to recall Doug mentioning that could be an issue if it's retrofitted to the Lido 3. I had a problem with the crossbar stalling bean feed with the original Feldgrind, but oddly enough not with the Feldgrind 2.0, and I couldn't see any difference internally. The original Lido also had the crossbar, and it was kind of nice having a wide open throat on the Lido 2, but I don't remember it being a big deal either way.


dominico wrote:It actually feels a bit lighter than the Lido 3 in the hand, but a scale verified that they are in fact the same weight.

Interesting. It must have the cut down profile of the Lido 3. The Lido 2 is over 500g heavier than the Lido 3 with the same catch cup. The hopper capacity is nearly identical, so I assume the Lido E will be the same. Easily enough for a 70g load for a large brew.

I really think OE should consolidate their Lido lineup. There is no point in having three separate grinders unless the $20 price point difference is a deal breaker and seriously affects sales. The Lido E with the travel handle would basically cover the use cases of all three current grinders now the Lido 2 doesn't have the distinguishing feature of the more aggressive Italmill burrs.
Chris
Top
← Back •
By accessing this site, you agree to the site's terms of service. If you need help with the site, please contact us.