Thanks to Dan K's pix, i was able to do the "sweeper" vane mod on a Mazzer SJ...I actually used heavy duty velcro, cut and measured to hit bottom...i used only the rubbery "nubby" sides, stuck together...not the felt portion...makes for a stiff, very effective sweeper...now if i could just machine the width of the upper vanes a bit narrower....it's quite a resting place for grinds!
Man, this thing grinds fast!
Rob
LMWDP #187
www.robertjason.com
Top

For those who are wondering what picture Rob is referring to... 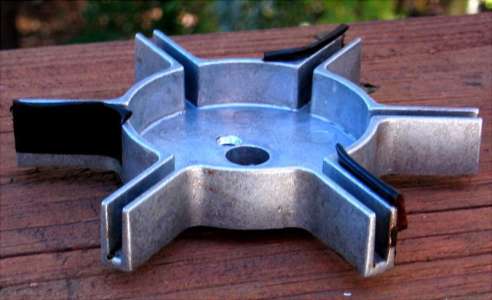 Referring back to a post I answered on CG (link). As for the grinds ledge, check out the "Modifications" section of HB's handy Resources page.
Dan Kehn
Top

Except MINE is less sticky!

Dan, thanks for taking all that time with me last night...you truly are the uber Geek
Rob
LMWDP #187
www.robertjason.com
Top

Velcro or electrical tape? I've heard that the velcro develops a "coffee mustache", which isn't a problem with my proposal. The adhesive portion is folded onto itself, so there's nothing to stick to. It wears out after a few months though.
Dan Kehn
Top

Velcro..my is folded over as well, sticking to itself...only the rubber portion touches the grind....
BTW, there is a thin metal wire like thing sticking up, screwed in to one of the upper vanes...is that to relieve static?
there's a corresponding hole on the opposite side, but it's empty....
Missing the tray that goes on the bottom to catch grinds...no biggie, though
It ground a triple in around 10 secs...maybe a tick less..had tamper in throat....it really shoots the grind to the front side of the doser...
Rob
LMWDP #187
www.robertjason.com
Top

That little wire sticking up from the end of a vane is to knock off the stale grounds from the doser's interior. It comes in handy at cafes that fill to the doser's brim.

PS: espressoparts.com sells the SJ tray separately. It's not cheap, but much bigger than the Mini (pseudo) catch tray and it looks sharp.
Dan Kehn
Top

Another big thank you...I originally thought my cafe-owner friend was loaning me a Mazzer MAJOR...was surprised it was the SJ...I told her i would clean it up and sell it for her...not sure where/when they originally purchased...
It's scratchless except for a couple on left front...i removed the PF holder as well...easier with naked PF..edit..hee hee, and I ground vac this morning as well...no harder to adjust than my Rocky DL....I might see if she'll sell it (the SJ) to me...
I'd cut down the hopper, or get the mini cut down from chris...
Haven't peeked at the burrs as yet...chicken...i think theres's a screw stopping me from rotating it(the grind mechanism) completely off

HB wrote:PS: espressoparts.com sells the SJ tray separately. It's not cheap, but much bigger than the Mini (pseudo) catch tray and it looks sharp.

Do you have a link to this? I can't find it anywhere, but would like to look into it as I think it would work well with my new Mini E Doserless.

No, I ordered it from Brian over the phone. I talked to Dave and he'll post the specifics.
Dan Kehn
Top

Yeah I talked with Devon and we quit carrying it as a separate item since it costs $50.00!!! The new Mazzers all come with one obviously, but we find that they really don't work all that well. You still end up with coffee outside the tray if you are particularly messy when you dose, which I have to admit I am since I over-dose and use the lid to scrape and distribute the excess grounds.

We actually retired the plastic tray that came with our Mazzer Mini, this is what we use and you might find it to be a little more affordable and useful.

David White
EspressoParts.com
Top
← Back •
By accessing this site, you agree to the site's terms of service. If you need help with the site, please contact us .