The New HG one Grinder: The Home Test - Page 25

I'm not having much of a static problem with my 83mm HG One. Only 0.1g clings to the funnel, but is easily released with a slight tap of my finger. The grinds pile up nicely without a central cone (see photo below). 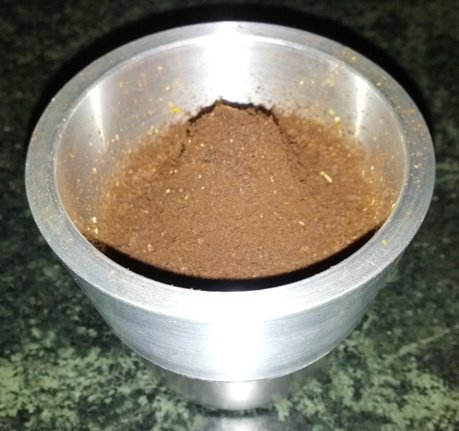 I live in Santa Barbara, where it is currently 52 degrees outside and 93% relative humidity. The air is heated up to 65 degrees inside, so the relative humidity at the grinder is relatively high, which will minimize static.
Top

Thanks for the compliment but I don't remember sending you any of my beans. By the way, I pass that bridge on the label every day.

I ran out of my own espresso roasts, so I was able to buy a bit from my friends cafe. It's great stuff.
Top

chococar wrote:I'm not having much of a static problem with my 83mm HG One. Only 0.1g clings to the funnel, but is easily released with a slight tap of my finger. The grinds pile up nicely without a central cone (see photo below).
<image>
I live in Santa Barbara, where it is currently 52 degrees outside and 93% relative humidity. The air is heated up to 65 degrees inside, so the relative humidity at the grinder is relatively high, which will minimize static.


Yeah, again, out of the 10 or so different espresso blends or S.O.'s I've put thru it, only 3 of them gave me any static issues.

And remember, I had both on my counter at the same time. Both the 83 and the 71 displayed the same phenomena. So, it's not s specific fault of the 71 burrset.
Top

Thank you Andy Schecter, for sharing this awesomely easy trick just now, from your troves of Alt.coffee info from back in 2005.

"From David Ross, fixing static in grinders: Add one or two droplets of water to the beans before grinding."

Now it doesn't matter what coffee I put thru the grinder.Pretty cool.

For grins, I tried the "few drops of water" trick on my PeDe handmill at work, which always had static issues in the metal catch tray. To my surprise I had no static whatsoever, and when I dumped the grounds into my pour-over, every last bit came out; no tapping needed.

Thanks for the tip. I think anyone single dosing can benefit from this tip.
Merle
Top

I was surprised how crazy easy and effective it was.
Top

Intriguing. Can you describe the process exactly? Do you add literally one drop of water on the top of the cup of weighed beans and then dump them into the grinder, thus ensuring that the drop reaches the burrs first? Would it be better to add 1 drop to the burrs directly? 1 or 2 drops? Maybe you could exhale on the beans to the same effect?

I wonder if this would work with Mazzers? (but please don't pour water into your mazzer

I took a small espresso *spoon, used the handle end thats nice and thin, I let two small random drops land in the basket and tossed them into the grinder. Nothing really to it, but it works, and it doesn't leave any residual moisture on the grinder at all. Hell, it looks cleaner.
Top

Similar process here in my PeDe. I had the beans loaded and ran my hand under a lisght stream of water from the faucet. I let two drops (very small!!) drop onto the beans before grinding. Seriously works like magic.

No reason this won't work on a Compak, Mazzer, Macap, and even a Pharos.
Merle
Top

Where has this trick been and why had it not become common knowledge? haha

I guess the water increases the humidity level around the grinds.
I know I've pulled a great shot when the flavour is 'like a beany taste that tastes like a bean'.
Top

I mistyped on my reply, I meant to write in my reply that it was a slim espresso cup spoon that I was referring to. I just let a few small drops fall of from the handle side of it.
Top
← Back •
By accessing this site, you agree to the site's terms of service. If you need help with the site, please contact us.