The New HG one Grinder: The Home Test - Page 23

Quite steady for me ...
You've got to consider that the Cremina has no spring, therefore the steadiness of the shot is a consequence of the arm pressure.
One can clearly see in the video, that the few and slight flow "hesitations" are directly related with the arm, that can be seen reflected in the machine's body.
Top

The whisking is just a modified WDT - took all of a few seconds. The concept of tapping the basket on the counter (with the funnel in place) after giving it a horizontal shake achieves pretty good distribution and is similar, if not identical, to the "slap shot" technique developed by Orphan Espresso. And the "icing on the cake" is that the PF has that useless spring removed.

Paul's technique essentially duplicates what I do about three or four times every morning.
Skål,

I'm back in action 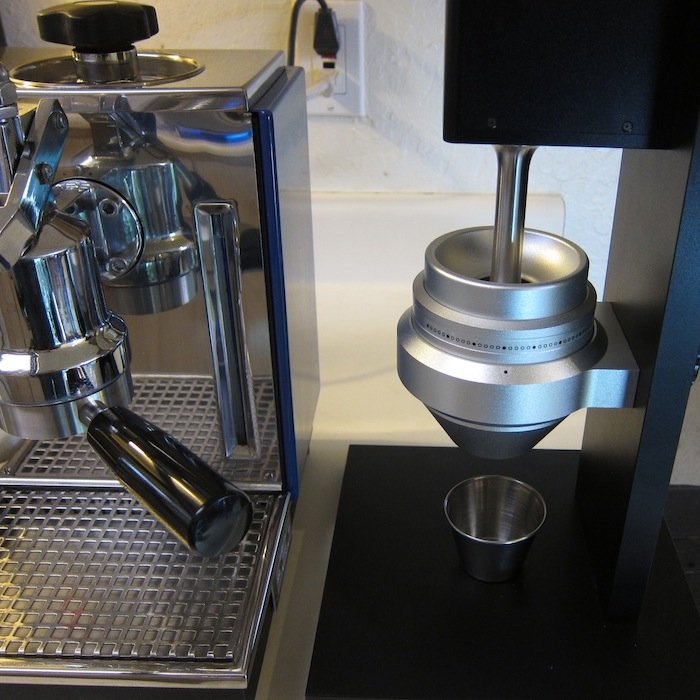 Paul and Craig were kind enough to offer me their other prototype as a lender last week, until the unit I purchased arrives in January. This one is the 71mm, it has the new sticker decal for grind settings that the units will ship with. My Cremina has been warmed up for the last hour so I'm all set.

I just got the Richard Penny PF from Doug and Barb, looking forward to testing that out, and a timer is on order from Amazon. The Cremina will now be my daily machine ( as soon as the timer arrives).
Top

I was under the impression that the HG One is on a similar level to a Titan grinder, thus any form of WDT is not necessary. Even if one has to use WDT, why not have the whole PF with the basket under the funnel? I've seen photos of a PF stand for the HG One, anyone knows why that was abandoned in favor of the basket only method?

WDT might take only a few seconds, but surely it's an additional step, which imho ideally shouldn't exist.

Just sold my K30 Vario and did a pre-order on the HG One 83mm. Currently a Mazzer Mini for a month from the person who bought the K30 Vario.
Top

dsc wrote:I was under the impression that the HG One is on a similar level to a Titan grinder, thus any form of WDT is not necessary. Even if one has to use WDT, why not have the whole PF with the basket under the funnel? I've seen photos of a PF stand for the HG One, anyone knows why that was abandoned in favor of the basket only method?

WDT might take only a few seconds, but surely it's an additional step, which imho ideally shouldn't exist.


Well, it's up to you to play with one and decide for yourself then. It's only been talked about endlessly in this thread. Not much more can be said.


Aside from that, I just pulled my 5th shot on it and it's getting better each shot. For certain, the static clung about 40% of my dose weight on the first shot, but was nearly gone by the 3rd grinding attempt. This happened after the first time Paul brought one over. I guess it shouldn't be surprised that a static charge could build up when it's taken from one environment put in a car and driven to another. I wonder if there was a way to discharge it's static charge right off the bat? Using something rubber or??? Either way, it doesn't really make a difference once you've got your hands on it for a few minutes and discharged whatever positive charge it's picked up. I'm letting the Cremina cool down a bit before I go back for a few more.

My routine is still shorter time-wise than my electric grinders. After the 2nd dose ground thru the grinder, I was satisfied that I was seeing less than .10g retention, so I can skip the post grinding weighing. My grinding is done within 10 seconds or so for a 15g dose. I rap firmly against the upper dosing funnel to dislodge any clinging grinds, then do a stir with the mini whisk and a slap shot. Tamp, lock and pull. Still shorter than the electric grinder.

Of note, they only lent me the grinder and a dosing cup, but not the thick aluminum lower dosing funnel basket contraption that I wrote about in the thread earlier. I do believe that with proper practice, using the right technique when pulling up on the distribution thingamabob that sits in the lower funnel, that I can get even distribution into the basket sufficient enough to just do a slap, tamp and pull. But if a 2 second WDT or whisk gives me more even, consistent extractions, then I'll do that too.

I haven't said it before in this thread, so I'll say it now, for clarity sake, I'm not getting, nor have I asked for any kind of discount for the HG-One. I really love the grinder, it has it's flaws, but my opinions aren't clouded by incentives to buy one. They were kind enough to let me buy the first serial number unit, but I'm paying full price and happy to do so.
Top

@TomC. How do you like the HG One compared to the K30? Especially curious about grindquality and taste with the low retention. Do you find it easier to work with.

Hope I made the right decision to sell the K30 and buy an HG One. The HG One really looks beautiful. A sign of true craftsmanship.
Top

Static can be reduced by having a metallic (non stainless) piece of metal in contact with the grinds. If it were me I'd try to find a wooden bowl to catch the grinds, and have something metallic in in to diffuse the static.

At least that's what works with my wooden hand grinders. I grind 1-2 minutes before I want to prepare the shot, then let them sit. Any static is gone by the time I'm ready to dose into the basket. The grinds are completely clump free and require no WDT or other preparation. Straight from the grinder drawer into the basket.
LMWDP #049
Hand-ground, hand-pulled: "hands down.."
Top

I'm still trying to eliminate it. Yesterday after it arrived it took about 3 or so rounds before it was completely gone. I'm using a new espresso now too. I took it with me to Dustin's cafe to pull shots on the Slayer, and came home with the same espresso they were pulling.

I'm 5 shots in and still have more than half of the weight left clinging to the funnel. I'm dosing 15.10-15.15g to usually land right at 15.00g. But only 7-7.5g are finding their way into the basket. If I whack the the funnel firmly, it all falls right out, but I don't want to be ringing a bell every morning at 5 am. The espresso grounds are literally 1/2 thick coating the whole funnel.

As far as taste, the same espresso was better in my opinion in the Cremina than the Slayer.

I remember some beans were less prone to static than others from the first time I had one. I transferred these beans into my normal glass jars and will play with various ways to try to eliminate the problem.

I really wonder if the funnel could have been designed to be a more steeply pitched wall angle, so that gravity would overcome the static cling and they'd just fall, even after building up a bit. That would make the funnel taller and take up more space under the burrs, which could be a little tricky fitting various devices under there.
Top

Have you tried food safe silicone spray? Some of us Pharos users did that to help the grounds skid out of the funnel better.
Gary
LMWDP#308