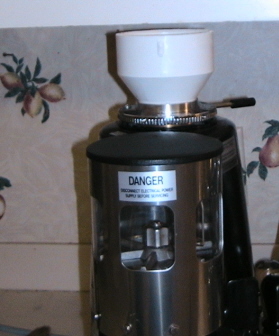 For others' reference, the bottom part of this funnel is a 1.5" female fitting and the top is a 3" female fitting. The box at Home Depot says something like "1 1/2" to 3" converter". The only part that really matters is that your bottom piece fits.

And thanks for the idea, IMAWriter .. my SJ is now sporting one of these 'funnels' too

The 3" end cap in sporty Schedule 40 Black would make a nice addition as well. You may need to do a bit of adjusting, though, as they are designed to fit rather snugly...
Espresso Sniper
One Shot, One Kill

In a similar vein I also stumbled upon a coincidence of dimensions when I was browsing through my local Sur La Table store. In this case it was a standard canning funnel, which turns out, just like your PVC fitting, fits perfectly inside the throat of the Super Jolly.

Adding to the dimensional coincidences is that a standard tamper also fits perfectly inside the throat of the funnel. This is due to the thinness of the funnel - any thicker and it would not work... 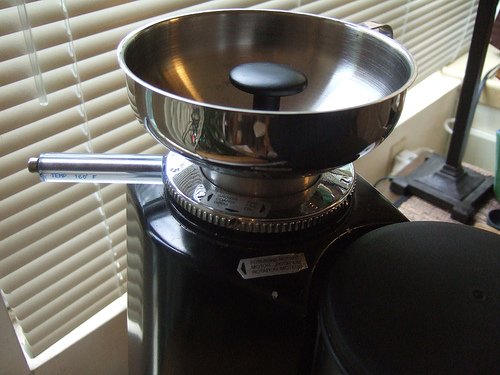 The "freebie" plastic tamper is kept in the funnel as I pour in one shot's worth of beans. Doing so allows me to make last minute adjustments to the grind without the beans getting in the way. Then I start the SJ and lift the tamper to let the beans in. I then rest the tamper onto the beans during the grind, maximizing stability and improving feed by its subtle weight.

Even with my rather heavy 20 g standard dose, all the beans comfortably fit into the throat of the funnel, meaning that no beans gets trapped behind the tamper during grinding.

Once I saw that the tamper fits into the funnel, I decided that I might possibly use it during dosing and leveling, resulting in a 100% use of the grounds. Great - much cleaner and no waste! (I pre-measure my beans before grinding ...) 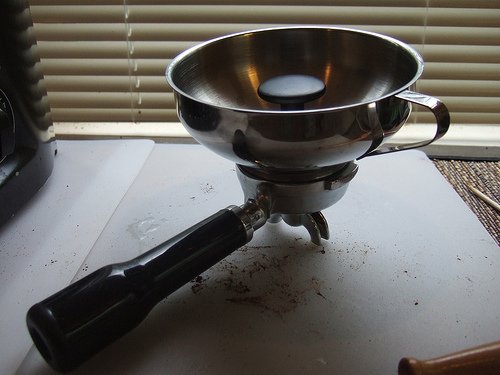 After this superficial pre-tamp the funnel gets used for yet one more purpose - as a tamping base!

For this I invert the funnel so that the small end points up and rest the portafilter into its throat. The wide end of the funnel creates an incredibly secure base, and the strength of the stainless steel allows me to use the hardest of tamps without a worry. This last use of the funnel works particularly well with both a naked portafilter or with a single-spout portafilter, both of which can be awkward during tamping.

I imagine the PVC fitting can be used in much the same way, except its thickness probably precludes getting the tamper to fit inside.

A video of the entire process:
http://youtube.com/watch?v=D_BEnIr07G4


BTW speaking of "Home Depot" Super Jolly hacks, here's one I did using the black PVC drain fittings found in the plumbing department: 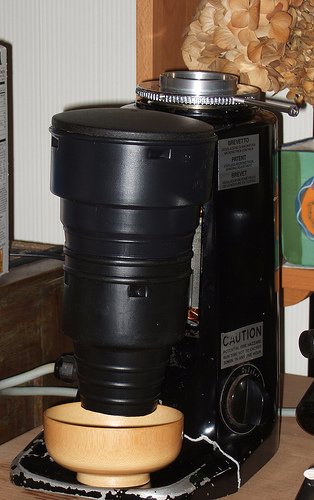 I removed the stock doser and my SJ is now doserless! Grinding directly into a bowl greatly simplifies the process and allows for catching all of the grounds...
Top

Hi Cgfan,
What a great, simple adaptation!
I would like to get a canning funnel like your one but I live in Australia. I guess I will look around.

I can get one from the US on an auction site....

Gees it looks so similar!

I like the way that you have utilized a stainless socket head capscrew to turn the grind adjustment....same as I have.
All the best,
Paolo
Top

Yes, that canning funnel on the eBay link does look the same. If you look at the dimensions posted on the auction it lists the diameter of the mouth at 2.25", which is just a tad over 57 mm. That would seem perfect for a tamper designed for a 58 mm portafilter to fit into. I am sure if this funnel is not identical to mine, at the very least it has the same dimensions as mine where it counts - at the mouth.

That's great you picked up on the metric socket head cap screw on the Mazzer grind dial ring. I had completely forgotten about that, and it was my very first "mod" on the Mazzer. I also now use a piece of vinyl tubing on the length of the screw to ease the stress on me fingers, as can be seen in the photo above... It certainly helps with my daily adjust! Nice to find a like mind out there!

You know...I had the Home Depot hopper on my machine for a couple of years now. Finally broke down and bought a mazzer mini hopper. No difference in function, but I'm so much happier with it. My wife and son have even walked by and commented on how much better it looked. Yes, I know that form follows function, but there's something to be said for polishing up one's tools. (Not to mention that the gated chute is nice for cleaning or a one off shot of decaf.)

Hmmmm... I thought the canning funnel looked quite clean and wife-friendly... Quar, were you referring to the white PVC version?

And with the canning funnel/plastic tamper setup, the lightweight plastic tamper acts not onlly as a beans gate of sorts, but also helps to stabilize the feed with the subtle pressure it exerts on the beans...
Top

Yes, I had the PVC edition. Wasn't so much a matter of wife friendliness...(That went out the window years ago...) It's just nice to have the matching hopper. I simply found it interesting that both my 5 year old and wife were actually moved to comment. The canning funnel is much more attractive than the PVC hopper.

Hi CGFAN,
I found a canning funnel in a local (Australian) kitchenware shop. As a result, I have stored my original Mazzer hopper in its box....this one is so much more practical. It actually looks great too.

I have by-passed the safety feature that only allowed the grinder to run when the hopper was installed and, like you, weigh the optimum amount of ground coffee so that there is no guesswork when filling the portafilter.The result....once the (new) Mazzer was dialled-in....WOW!!!!

Thanks for the tip!

Regards,
Paolo.
Top
← Back •
By accessing this site, you agree to the site's terms of service. If you need help with the site, please contact us.