Grinders are one of the keys to exceptional espresso. Discuss them here.
← Back to Grinders • 28 posts •

RapidCoffee wrote:Nice job, Tim! Any static problems with the plastic? (Nothing apparent in your pix.)

I did my first drip grind today and I must say that static was a very serious problem! Yikes coffee everywhere. I wound up having to leave my lid on and also cap the bottle. After grinding the whole inside of the bottle was covered. I removed the lid and brushed the coffee down to the bottom. Removed the bottle cap and emptied the grounds into the lid from my coffee jar (then into my drip filter basket). I wonder if a sleeve of aluminum foil would buffer the static issue?

But when grinding for espresso static doesn't seem apparent. Keep in mind I only grind enough for a double at a time. But with this set-up you can't really fill the "doser" can you?

Would make a nice standalone "How To" somewhere.
Top

Agreed. I've added it to the Espresso Gear FAQs and Favorites under Grinders and the site-wide FAQs and Favorites. FYI, the latter topics are also used to feed some of the Related Topics matches at the end of each thread.
Dan Kehn
Top

I'm tickled that the set-up in hindsight seems so "common sense." It's funny, it's just like I said above when I was holding that bottle a light went off. I'm glad it came together as well as it did. Not to mention it just works great. Sure is nice not having a doser to clean anymore (once was enough)! Looking at it I don't think it looks terribly ugly...(wife doesn't mind it either).

Again, my thanks to you all! This has been a lot of fun.

Just thought I'd add in my 2 cents worth by sharing the doserless mod that I did on my Mazzer Super Jolly. Having purchased a Super Jolly but being used to a process where I grind for each shot, I knew I had to do something about the over-sized bean hopper and the doser. Neither were suitable for the way I like to do my shots, using beans ground just prior to pulling my shot.

When I was going through my options I knew I needed something relatively easy to do, as might befit my rather modest fabrication skills. I also didn't care to invest too much money or time, although I've invested plenty of both in the pursuit of the ideal shot. What eventually came together far exceeded my original expectations, as not only did I find a solution for the hopper and the doser, but also a solution that has affected my entire workflow in a very positive way...

You'll see how this all comes together; a workflow which is clean, efficient (no coffee waste), and utilizes a simple, off-the-shelf, grain/canning funnel as a veritable Swiss Army Knife - you'll see that it gets used in three different ways!... The latter is possible due to a series of dimensional coincidences between the grain/canning funnel, my tamper, the Mazzer grind chamber, and the E61 portafilter.

Here are the principal components to my mod and consequent workflow, after which is a link to a YouTube video demonstrating my entire workflow (when paired with my Expobar Brewtus I). 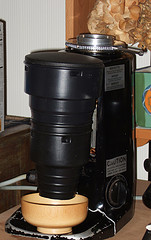 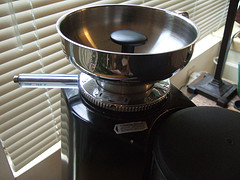 the funnel also fits into my portafilter 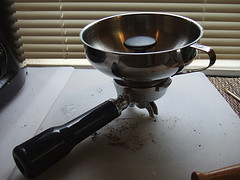 So how does this all come together? Rather than put it into more words, it's probably best demonstrated via this video that I put together showing the entire workflow.

A video of the entire workflow.
Top

TimEggers wrote:I did my first drip grind today and I must say that static was a very serious problem! Yikes coffee everywhere. I wound up having to leave my lid on and also cap the bottle. After grinding the whole inside of the bottle was covered. I removed the lid and brushed the coffee down to the bottom. Removed the bottle cap and emptied the grounds into the lid from my coffee jar (then into my drip filter basket). I wonder if a sleeve of aluminum foil would buffer the static issue?

When I originally did my mod, (shown in the post immediately above), I thought that I had somehow managed to avoid the static issue. However as the weather got warmer and drier I realized that I did have a static problem, though not as profound as what you describe. With my mod the ground coffee did not seem to have much of an affinity for the ABS couplers that made up the mod, but rather as soon as the grounds were dispensed into a non-conductive container, I could tell that it was charged quite a bit. When I would spoon out a measure of grounds from the container, (with a non-conductive scoop), some of the disturbed grounds would get dislodged from its neighbors and jump to the other side of the bowl.

The first thing I did was to use a metallic bowl to collect the grounds. That didn't completely solve it, as there was still much residual charge left in the grounds that didn't make contact with the container. What was needed was a means by which the grounds, during its free fall to the waiting container, would touch a grounded surface.

What I ended up doing was to fashion a sheet of copper foil into a cone, as tall as the stackup of the two ABS couplers used in my mod. This copper cone would then line the inside of the ABS couplers, and as it fell it would encounter the narrow portion of the cone, increasing the likelihood of contact with the copper. It also had the benefit of presenting a smooth surface to the falling grounds, vs. the steps and ridges present in the ABS couplers themselves.

Perhaps copper foil isn't quite the right word, as the copper I used was substantially thicker than household aluminum foil. It's easy to work with and doesn't "crinkle up" like foil does, and it takes on a relatively strong and permanent crease when you want it to.

Where the rectangular exit hole from the grind chamber would be, I cut into the copper foil an "X" of equivalent height and width. This created four triangular tabs which I bent through and back a similarly shaped hole in the top ABS coupler. Though it is making superficial contact via these tabs to the grinder body, the main grounding is occurring with the 2 screws (that used to attach the doser to the grinder) that is now used to attach the top ABS coupler to the grinder body, and in the process also clamps down the copper foil completing the ground.

I have been using this mod for over a year now and no longer have a static issue. As you will see in my "workflow" video (also linked in the above post) I no longer scoop out the grounds from the container either, but rather dump the entire contents into my portafilter via the use of a wide-brimmed funnel.
Top

I use an RR45, and one thing that annoys me is that the coffee sprays everywhere in the doser, and much is left behind. I tried (on a dry winter day) to build a chute from a plastic soda-bottle to guide the grinds and experienced awful static problems. So, count me in the boat that is curious to see how well this works in dry weather.
Top

TimEggers wrote:Edited 3-11-07: Please note that I have replaced the original post with this the latest version of the mod. The prototype used a green plastic bottle. Enjoy!

I was sipping on the last of the Mountain Dew in a bottle and all of a sudden something felt familiar in my hands. It was from when I removed the doser off my new-to-me Super Jolly! Ding a light bulb went off. Preferring doserless I had an idea, but would it work?

Can you write please, what brand of refreshment ,was the bottle from, because I found some bottles from Pepsi, but there are not totally cylindrical, but it is of larger diameter up and down, and less diameter in the middle of the bottle.

I live in a dry area, and also experience static problems when using plastic (in both dosered and doserless grinders). My Mazzer SJ doserless mod uses a small copper spout, readily available at hardware stores, which eliminates static issues. IMHO dosers (if used properly) can help reduce clumping, but otherwise a doserless design is much better suited to the needs of the home barista. I took my SJ doser off two years ago, and I've never been inclined to reattach it.
John
Top

Can you write please, what brand of refreshment ,was the bottle from, because I found some bottles from Pepsi, but there are not totally cylindrical, but it is of larger diameter up and down, and less diameter in the middle of the bottle.

Hello Theodore, yes any 2-liter plastic bottle should work. At my location many soft drinks use the same 2-liter bottle size and shape.