My Kony arrived a couple of days ago, and what a behemoth it is! I hope to have a user's report in a week or two to post here, but for now I thought I would share this mod that a lot of folks have done or talked about, but I think I came up with an easier method:

The doser has an enclosed microswitch, operated by a metal flap hanging from it that senses the level of ground coffee in the doser. When the doser is nearly full the flap is lifted and the grinder is shut off. That's great if you are making fifty to a hundred drinks an hour. For the rest of us living in the mortal world, there is rarely (if ever) any reason to grind so much coffee that the doser would be nearly filled. So what? The switch and it's flap sit directly in front of the exit chute and makes it a real pain to clean out leftover grounds in the chute. The solution is to remove the switch assembly, and here is an easily reversible method to do so:

2- Remove the bean hopper assembly and remove doser lid and place them out of the way.

3- use a 4.5mm socket (I used an extension with a 1/4" drive universal joint) and remove the two odd looking bolts which hold the doser to the body of the grinder. They are located, one to each side of the switch. If you do not have a 4.5mm socket, get one to avoid rounding the nuts. Put a towel on the doser forks and turn the doser sideways and lay it on the towel.

4- The switch is held to the doser body by two, small Phillips head screws that go in from behind. Remove the two screws.

5- Lay a towel down on the work surface and lay the grinder onto it's left side, power switch facing upwards, with the bottom facing you (take care with the doser as you tip the Kony over!). Unplug the Grinder!!!

6- Use a slot screwdriver and remove the grounds tray clip and then the four feet. The bottom will now come off easily exposing the wiring inside the Kony. Allow the bottom to lay flat on the work surface as seen here: 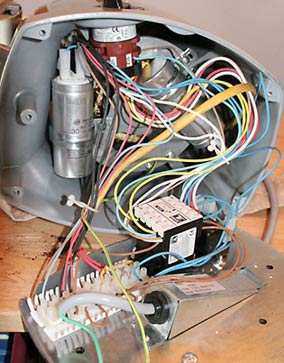 The insides of the Kony are as impressive as the outside!

7- There are two gray wires attached to the junction strip on the base as indicated here: 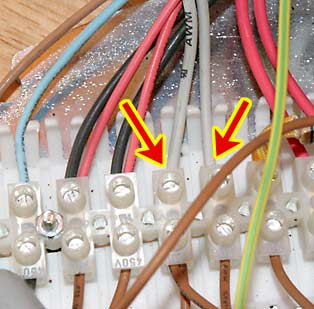 8- The switch is normally closed so you need to make a jumper wire to replace the switch as shown here: 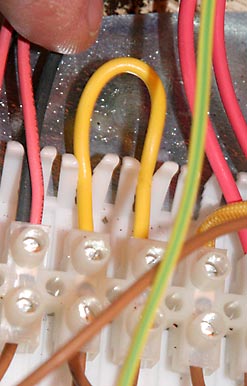 You may have to loosen the two little screws on the junction strip a bit more to get the wire fully inserted. Tighten the screws just tight enough to securely hold the wire but no further. Be sure that the conductor of the wire is fully concealed and that there are no loose strands of wire sticking out.

9- Reattach the bottom, making absolutely sure that no wires or anything else gets trapped between the base and the body of the Kony!

10- Be sure that the tie wrap that secured the two cables on the doser is not hung up (allow it to just drop into the grinder, still encircling the other cable), and reattach the doser to the body of the Kony.

That's it! The beauty of this method is that no wires are cut so the process can very easily be reversed in the future is so desired.
Espresso! My Espresso! - http://www.EspressoMyEspresso.com
LMWDP #644
Top

BTW, this method also applies to the Major (I've got one) and possibly the Super Jolly (can't say for sure since I don't have one). Wire colors may be different though, on my Major the wires were white.
Top

Randy G. wrote:The doser has a switch with a flap hanging from it that senses the level of ground coffee in the doser. That's great if you are making fifty to a hundred drinks an hour. For the rest of us living in the mortal world, there is rarely (if ever) any reason to grind so much coffee that the doser would be nearly filled. The problem is that the switch and it's flap sits directly in front of the exit chute and makes it a real pain to clean out leftover grounds in the chute. The solution is to remove the switch, and here is an easily reversible method to do so:

One question, is a flap-ectomy covered by insurance?
-AndyS
VST refractometer/filter basket beta tester, no financial interest in the company
Top

Thanks for the kind words, Andy. They mean a lot coming from you.

But don't worry about the insurance. I have an HMO... Honduran Macchiato Organization.

The same trick works for the original Cimbali Max sold in Europe (I don't know for the Hybrid).

I did the same for my switch, then removed the finger guard and the plastic thingy (Dremel power) that supports both to clear the grind chute for cleaning.
Top

hello,
I made an electrical diagram (inspired by jacob's diagram of the robur which helped me to understand the wiring there): 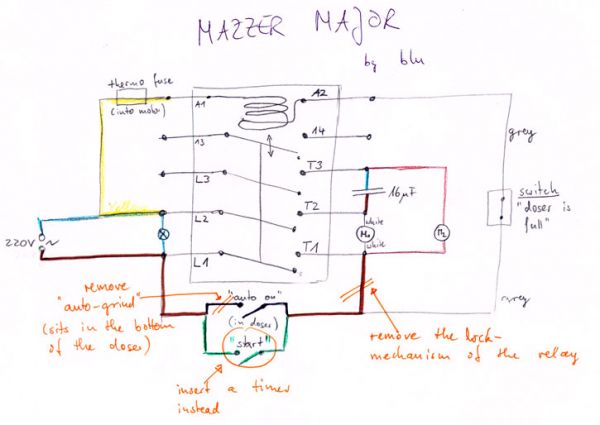 removing the lock-mechanism of the relay makes the major stop grinding after letting go the "start"-switch from "start" to "1". otherwise the grinder doesn't stop.
as randy wrote above the "doser-full-stop-grinding" switch makes no sense at home. it can be removed (but in my eyes there is no need to remove it).
on the other hand IMO it's necessary to remove the "auto-start-grinding"-switch in the bottom of the doser. better: don't disassembly the switch - simply remove the black wiring...

blu wrote:hello,
I made an electrical diagram...

Blu did you end up buying a new motor for your Robur?
Top

blu wrote: as randy wrote above the "doser-full-stop-grinding" switch makes no sense at home. it can be removed (but in my eyes there is no need to remove it).

IMO, in the home environment it does make sense to remove the switch completely, at least with the Kony. The switch-mount and flap block access to the exit chute of the grinding chamber. it is a LOT easier to clean out the chute with that out of the way. The entire job took me less than 30 minutes including taking the photos and rummaging out in the garage for a 4.5mm socket.

The original operation of the power switch is not optimum for the home user, but I have developed a working method that seems to make best use of it with my style of prep.
Espresso! My Espresso! - http://www.EspressoMyEspresso.com
LMWDP #644
Top

Jacob wrote:Blu did you end up buying a new motor for your Robur?

hi,
yes it's been ordered before xmas. still waiting for it...
cari saluti blu
@brad: excellent!
Top
← Back •
By accessing this site, you agree to the site's terms of service. If you need help with the site, please contact us.