I have been meaning to modify my Cimbali Junior grinder ever since I saw that there were beans and grounds becoming stuck above the upper burr in the area between the burrs and the hopper. I finally went to HD yesterday and bought what is called a "1 1/2" male adapter" in the plumbing section for a big 89 cents. They had a few lengths but the one I bought was around 2 3/8" - 2 1/2". I should have measured before modifying the part, but I got ahead of myself. First thing I did was remove the hopper to expose the adjustments rings and upper burr carrier area. The inner diameter of the adjustment ring was approx. 2 1/8" so I had to shave down the widest part of the pipe adapter to slightly less than that diameter. I used a small motorized belt sander but you could do this a few ways depending on the equipment available. Once that was done and tested for fit, you need to remove some of the PVC material to notch around the burr carrier screw "flanges"(?) and this was best done with a Dremel and the standard 1/2" drum sander. You sand down three notched areas to go over where the upper burr screws to the carrier. The whole pipe adapter then needs to be cut down to length which should be approx. 2" to 2 1/8" (less if you adjust more than a few turns so it doesn't bind with the hopper throat and prevent further adjustment), and I cut the wider end so that the other end sits nice and flat on the upper burr. After that's done and everything fits nicely (should be somewhat of a snug fit to the upper burr screw flanges to hold it in place), install the hopper and that's all it takes. I added a few "after" pictures of the adapter and process below, but it took less than a half hour and the plumbing part was less than a dollar. It works great, and the problem has been solved with this mod - the beans feed directly into the burrs.

The pipe adapter, after modifying 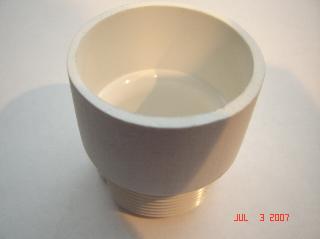 View of the adapter bottom with three notches 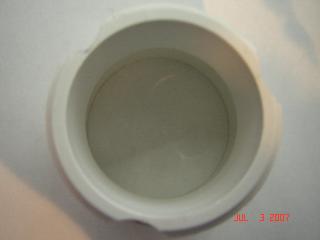 The Dremel drum sander for the notches 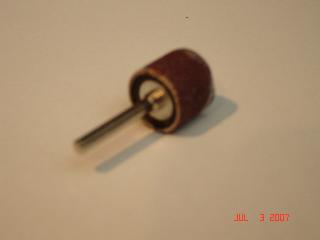 Another view of the modified and notched adapter 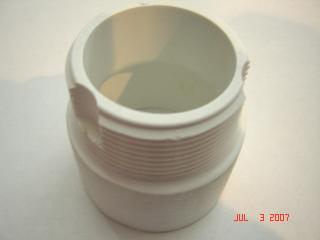 The upper burr area, as it comes from the factory 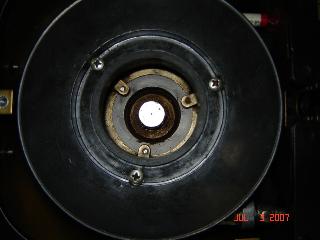 The modified pipe adapter in place 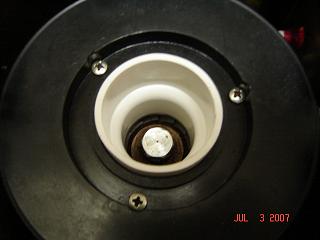 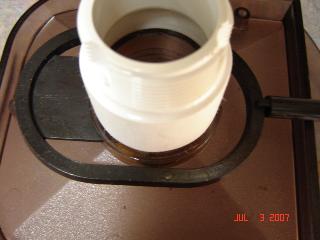 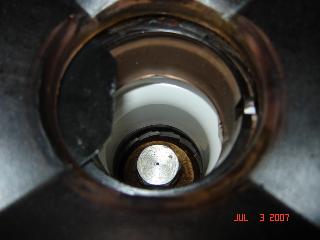 View of beans in the modified throat (mmm...Kid-O) 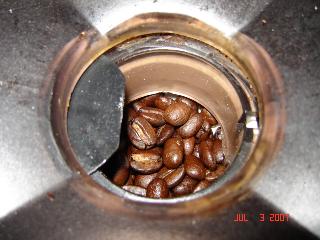 edited to add a few more tips to the instructions.
Top

Nice mod.... my biggest complaint of both the Cimbali Junior and MAX is that beans get lost and hung up on the grind setting indicator ring. The Junior tends to hold more bean mess on top of the burr carrier, but both have the lost bean issue.

Thanks for sharing.
Jeff Sawdy
Top

Great work. I have to read it again to get all the details, but looked like you located a very suitable piece of material to do the modification with, and turn that Cimbali into a performance vehicle. Thanks for sharing.
Top

Thanks. It's cheap and somewhat easy to do with the right tools, and I started using my Rocky more than the Junior because of the mess it always made above the burr area. I'm not sure if it would work as well with the Max due to the conical burrs having less of a seat for the part to sit on, but it might still be possible. I figure if anyone else can use this then it's worth posting, and hopefully the steps are clear enough even though I originally planned on a few before pictures and some along the way when shaping the pipe adapter. I ended up finishing it before I remembered to take any.

Edit - one thing I just thought of that I hadn't before, is the way this mod works during adjustments. I don't normally adjust too far from a single setting so this works fine, but if you adjust a lot with many turns of the adjustment knob, then you might have to cut the overall length to less than what I did (2 1/8") or shave a little from the inner part of the pipe adapter so that it won't bind. This would allow for adjustment either way without being restricted by the hopper's factory throat, if that makes sense. Just a concept and open to suggestions and improvements, but for what I do it works well so far. This plumbing part was as close to what I needed as I could find without making something from scratch.
Top

Excellent mod that addresses Cimbali's obvious oversight, thanks for sharing it. I've added this thread to the FAQs and Favorites. Let's hope the simplicity of your modification shames Cimbali into fixing it for real.
Dan Kehn
Top

Thanks, Dan - I appreciate that.
Top

Just received my Max-Hybrid, and wanted to deal with this issue right away. Call me lazy, but I didn't feel like making a run to the hardware store, so I looked around my workbench, and found another solution - the clear plastic tube used in a parts container, which is also shown in the image below. 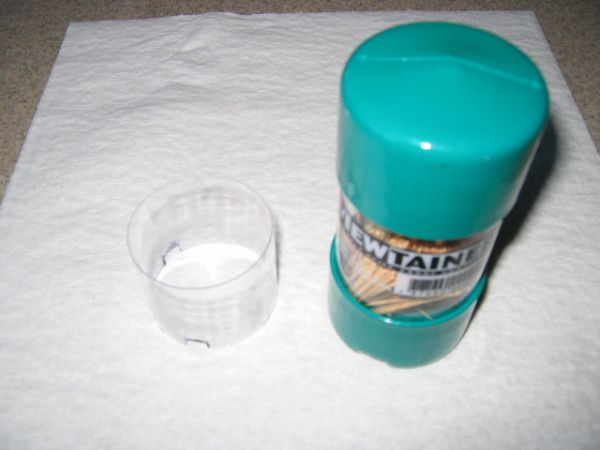 All in all, this was an incredibly simple solution to implement. All I really needed was a pair of sharp scissors and a utility knife - the scissors to cut the tube down to size, and the utility knife to score the notches where the sleeve slides over the three "bumps" of the burr carrier. Overall, I cut the height of the tube to about 1.5". Sorry, I didn't measure the diameter of the tube (and parts container), which may make picking one of up that much easier - let me know if you need this info, and I'll take a measurement of the one that wasn't sacrificed (for a very worthy cause).

I'd show you a picture of what the sleeve looks like installed... but it's clear! What I can say is that the inner diameter is perfect, and leaves minimal space between it and the hopper's feed tube. Overall, this works fantastic - the beans have a straight shot into the burrs, and there are no ledges for the beans to get hung up on. Also, the tube is completely contained inside the gap between the hopper and burrs.
Bob
Top

Nice job! Another version of the same concept - preventing the beans from sitting up on that rim above the upper burr. I haven't had any issues with mine since I did it, and I just wish Cimbali would come up with a way to add this type of bean feeder tube as an OEM part. It really does work.
Top

As far as Cimbali tweaking the design to eliminate this - I wouldn't count on it! (I would be curious how many of these grinders they sell per year.) Plus, from what I've seen, there isn't a perfect grinder for home use, and that's a bit of the fun for the gang here- coming up with mods to make this equipment a bit more consumer-friendly.
Bob
Top

You're probably right about the likelihood that they'll add this to the production models. Your version also seems much easier than the one I did which is always a good thing for those that might not have a lot of equipment and tools around the house. It is fun trying to come up with homemade improvements to grinders and espresso machines, at least I think so.
Top
← Back •
By accessing this site, you agree to the site's terms of service. If you need help with the site, please contact us.