TomC wrote:My Kruve kit is still circling the center of the state for some reason, but I've been sieving for years. One fun thing about sieving ( you probably know but I'm sharing for others who may be new to sieving coffee) is that you can really crank up your brew ratio. 1:12 brews taste like explosions in your mouth.

If quality over quantity works for you, it's definitely worth a try for folks to really up the BR. There seems to be less amplified sours and bitters and just more of the sweet spot.

This is especially fun with snappy Kenyan's demonstrating their classic dense blackberry flavors.

I know we all look forward to your experiences. Any recommended parameters you are planning to start with based on your sieving experiences?
Yes, i you per this on an iPhone
Top


Temp and time don't seem to matter quite as much, since the extraction seems so much more even (all anecdotally). So, I'd do immersion style brews, either in the siphon or the Clever and just adjust by taste. Some coffees don't seem to do as well. I never personally liked Indonesian/ Sumatran coffees or those that were heavier on the woody, forest floor notes prepped via sieving, since they just loose complexity to me. But the sparkling separation of flavor using brighter coffees that express fruits or florals only seem to get better.

There's some old threads on theories on fines buried somewhere here, that really try to examine the impact of fines (and later, boulders) on coffee extraction. I've held the impression that the fines only seem to make a cup more bitter mainly due to how they slow the drawdown time and lengthen the extraction via percolation. They just sorta net up and restrict the flow of brew on the way out, but don't really add much in terms of flavor themselves. But it's also important to carefully define what "fines" you're talking about. If you're dumping 20% of the coffee in the trash because it falls outside a pre-set sieve number, you're not just dumping fines, but plenty of extractable solids. When brewing anything like a siphon, where I make sure the water is spinning nicely in the upper globe before I add the coffee, you can pretty much guarantee that almost all the solubles extract within a few seconds of hitting the turbulent water (again, annecdotally speaking, I'm not looking to debate), so the infusion time can be kept quite short, especially since the sugars and acids will be the first thing to extract.

All that being said, grind much finer, sieve out the boulders and super-fines, and do a quick immersion brew that is polished in one way or another, either via a paper filter or Diguo style filter in the siphon, or simply use a Clever. The infusion time can be kept quite short. Just be sure to make your BR much lower, like 1:13 or so, to start. Go from there and adjust to your liking.

A very fun coffee to sieve and siphon is the Red Marquaha from Yemen, since it lacks the heavy forest floor, leather notes, but is packed full of awesome Hawaiian Punch tasting red fruits, but still has the incredible complexity of a good Yemen.
Top

TomC wrote:But it's also important to carefully define what "fines" you're talking about. If you're dumping 20% of the coffee in the trash because it falls outside a pre-set sieve number, you're not just dumping fines, but plenty of extractable solids.

Are there fines that don't have extractable solids? Are you referring to brown silver skins and chaff?
Scraping away (slowly) at the tyranny of biases and dogma.
Top


There are quantitatively, a vast majority of fines that don't have extractable material, these are the smallest shattered cell walls that are primarily cellulose. But I'm generally cautious when reading the word "fines" in case what I'm thinking isn't what the other person was describing. Those microfine shattered cell walls don't really have anything to extract. But you probably don't have to climb very high up from there in diameter before what you're looking at isn't a "fine", it's just a very fine particle of coffee, with lots of soluble material. Determining exactly where this cutoff point is, isn't readily obvious and I'm sure it's different for each coffee and each level of roast.

I wasn't referring to chaff/silverskins at all.
Top

TomC wrote:One fun thing about sieving... is that you can really crank up your brew ratio. 1:12 brews taste like explosions in your mouth.

If quality over quantity works for you, it's definitely worth a try for folks to really up the BR. There seems to be less amplified sours and bitters and just more of the sweet spot.

Thanks for the tip, Tom. I'd been brewing at 1:15 but when I last visited my folks, my Mom complained that my coffee was making her heart race so I backed it down to 1:16. My folks drink coffee all day long, not just in the morning so I think they're used to weaker pots.

This morning I amped it up to 1:14 with a very past crop Panama Elida Natural, this brew ratio combined with the sieving is helping getting the most out of this old green coffee. (It was vac sealed)
-Chris

samuellaw178 wrote:I am sure that can be done (if there is enough demand I suppose). Have you contacted Kruve about the idea?

Yes, sort of. I think they're likely watching this thread, and I sent them a note via Kickstarter. One of my problems is that I think they did a fantastically good job of designing this. My only real gripe is that I find getting the screen into the lower position to be a bit fiddly. That's kinda it.

So, I feel a little funny about whinging too much. Especially over something that will be super easy to fix (if - as you correctly pointed out - there's demand for it). But it DOES feel like significant oversight.

Added: They've seen and responded to my KS message. Definitely feel like these are good guys.
Top

Also, forgot to mention that I do a 5 minute 10 second brew. All of the coffee that I've brewed since I started removing particles under 300 um has been rather weak. Good flavor, but definitely not as strong as I'd like (I brew at a 20:1 ratio, which seems to be weaker than most folks here). So today I added an additional minute to the brew time, and that was much better.
Top 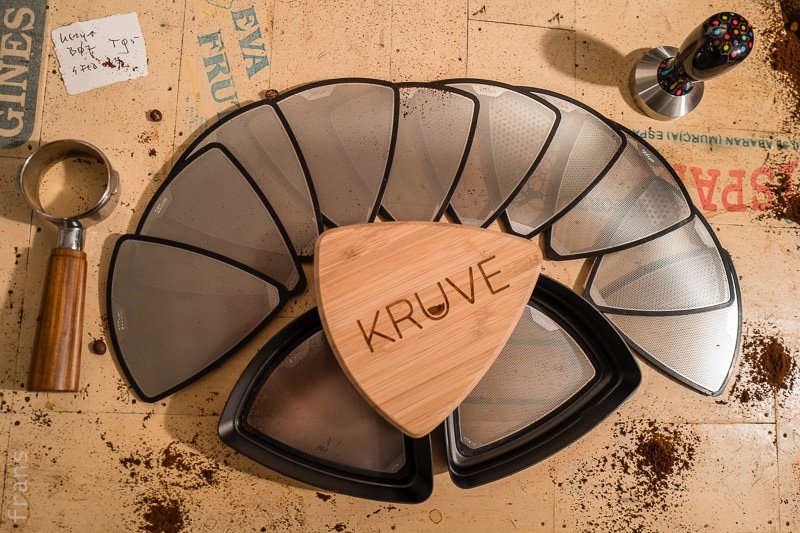 Now it's boxed again until I feel like playing with it.
Top

TomC wrote:All that being said, grind much finer, sieve out the boulders and super-fines, and do a quick immersion brew that is polished in one way or another, either via a paper filter or Diguo style filter in the siphon, or simply use a Clever. The infusion time can be kept quite short. Just be sure to make your BR much lower, like 1:13 or so, to start. Go from there and adjust to your liking.

Thanks for sharing your experience Tom! Kenyans are my favorite and so I'm super excited to play around with these ideas. It kind of reminds me of a lot of aeropress recipes that call for lower brewing ratios and shorter contact times, presumably to prevent overextraction from the pressure of the plunge and the finer grind.

I'm curious to know if you ever used a refractometer to measure the strengths and extractions on your favorite sieved/low BR/short infusion brews. I would think that with a really low brewing ratio that you'd get excessively strong coffee at extractions > 18%. So I guess that's another question I have: does sieving somehow enable you to get tasty coffee at lower extractions?
Top

samuellaw178 wrote: I forgot to measure the TDS of the first shot (I have an Atago refractometer). So I did another shot using the same procedure. Ended up with 12.4g for the shot. So the process is repeatable, good news. The 12.5g dose was pulled into 31.6g in about 27s. Was a tad too long I realized afterwards. Again, I've got the creamy mouthfeel and the lingering after taste. Measured the TDS and calculated the EY%. Guess what?? The TDS came at 8.1%, but the extraction yield was 23.8%! Never had I gotten such high EY even with overextraction. It does taste slightly overextracted but is drinkable. I will have to cut back the shot volume next time, or use more grind. 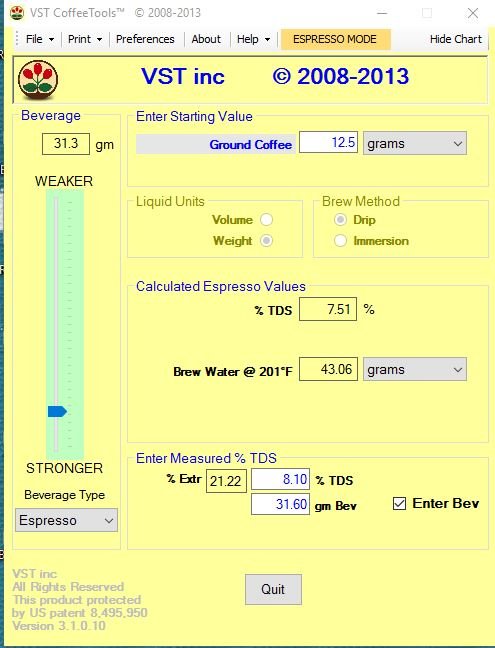 NB - I wonder if your assessment of the boulders may be the difference between grinders. If you are correct then in theory, assuming you have 10% boulders in your dose, your "boulder-less equivalent" dose (as entered into the EBF or EY calculation) should be 10% less than the measured dose. At which point EY would rise.

So a separate hypothesis is that for better grinders: [dose] = ["boulder-less" equivalent dose].

NB - What this means is that, for a lesser grinder, a larger doses may "over extract" rather than "under extract" - even though the Refractometer will say otherwise - since the part of the dose that actually participated in the pull (the "not-boulders") was lower than the measured dose. The hypothesis also renders a VST plot without sifting almost useless for anything but a perfect grinder.

Edit: BTW - Testing the hypothesis that boulders do not participate in the pull should be fairly easy. Grind two doses and sieve the boulders from one. Run the same beverage weight from both. If the TDS is identical (or nearly so) means the boulders did not participate in the percolation. (unfortunately I do not own a sieve so can't run this test myself).
Scraping away (slowly) at the tyranny of biases and dogma.
Top
← Back •
By accessing this site, you agree to the site's terms of service. If you need help with the site, please contact us.