Help me design and build a spout! - Page 5

I added a piece of old tupperware to the back to get a closer fit to the machine. If this works I am going to use some moldable epoxy for the rough shape and sand/file it down until it fits. You can also see I had to widen the square hole as well as widen the mounting points to fit the MDX.

I also found there are slits in the funnel within the front logo! I used some epoxy to cover them and I'll sand it smooth when its hardened. No more grounds flying everywhere.


Does anyone know the purpose of the rectangle slot above the bean exit chute? I assume it is OK to cover this over. I cant remember if there was an opening into the doser it was covered as well. 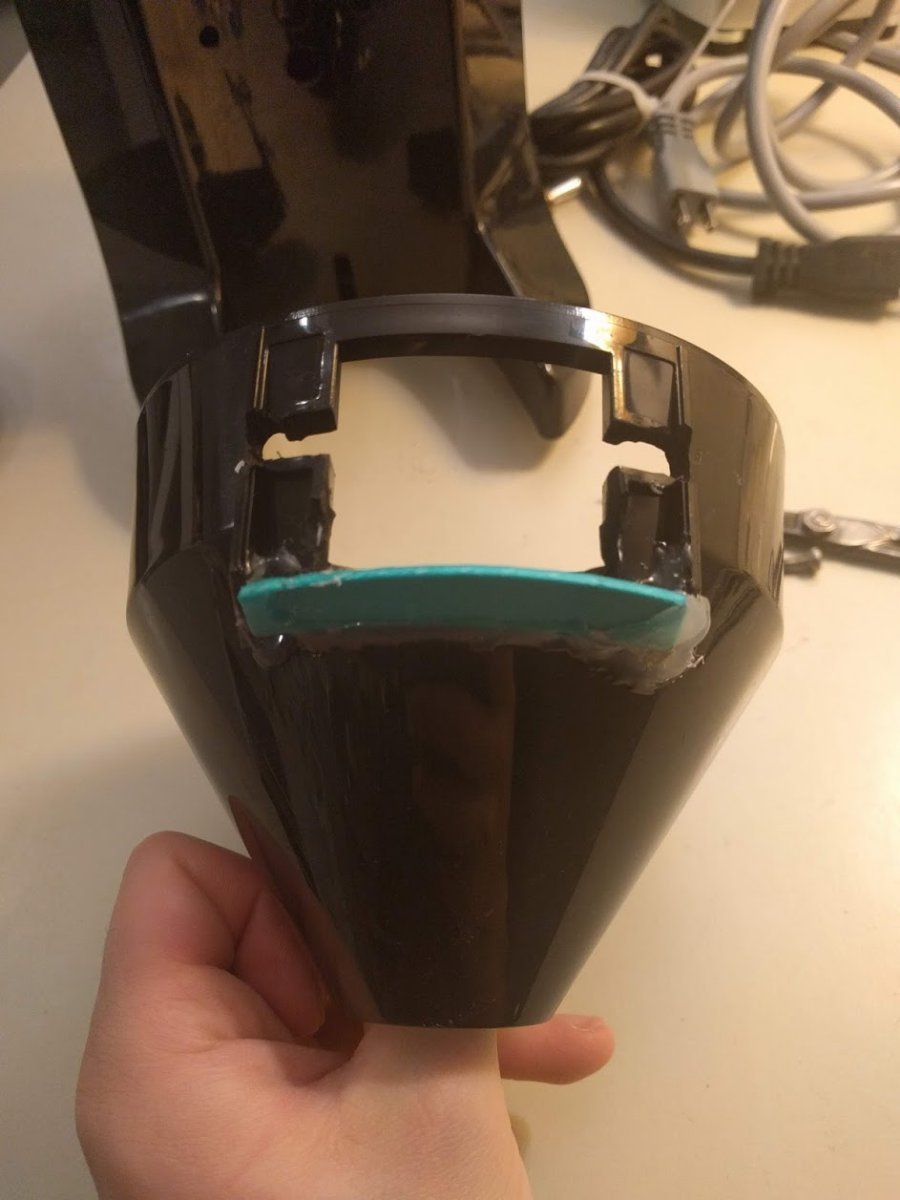 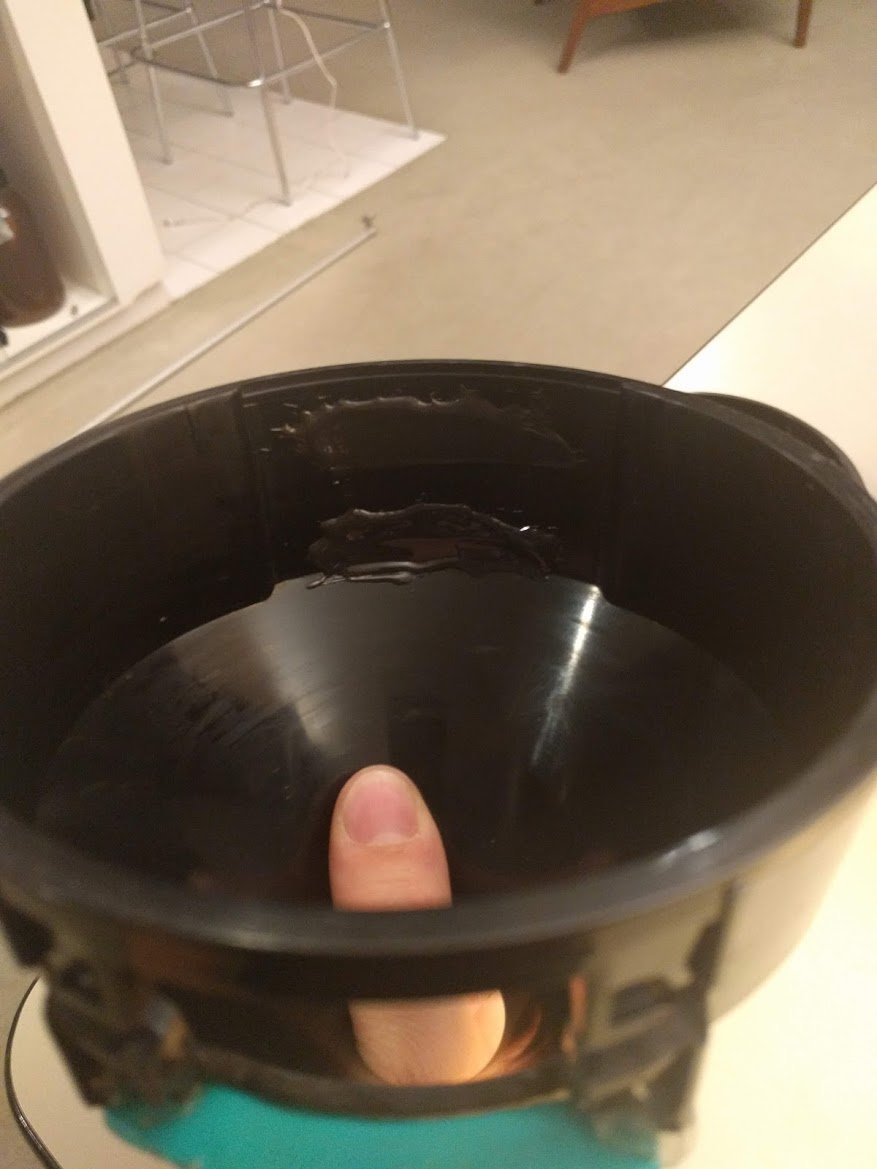 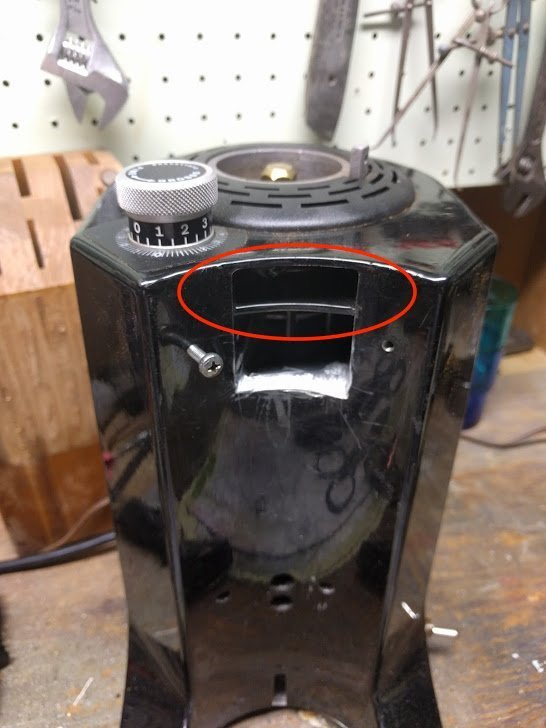 the top hole is for the switch cable, could be sealed with no risk.
you can also put few wires in the output chute to get some backpressure on the grounds exiting chute, resulting in greater time-based dosing consistency (if that is required). like the mazzer "anti-static screen".
Top

Received my funnel and removed the handle. It fits perfectly inside the plastic. I secured it with tape for testing purposes because I want to figure out where to glue it in place. How high up it should go. 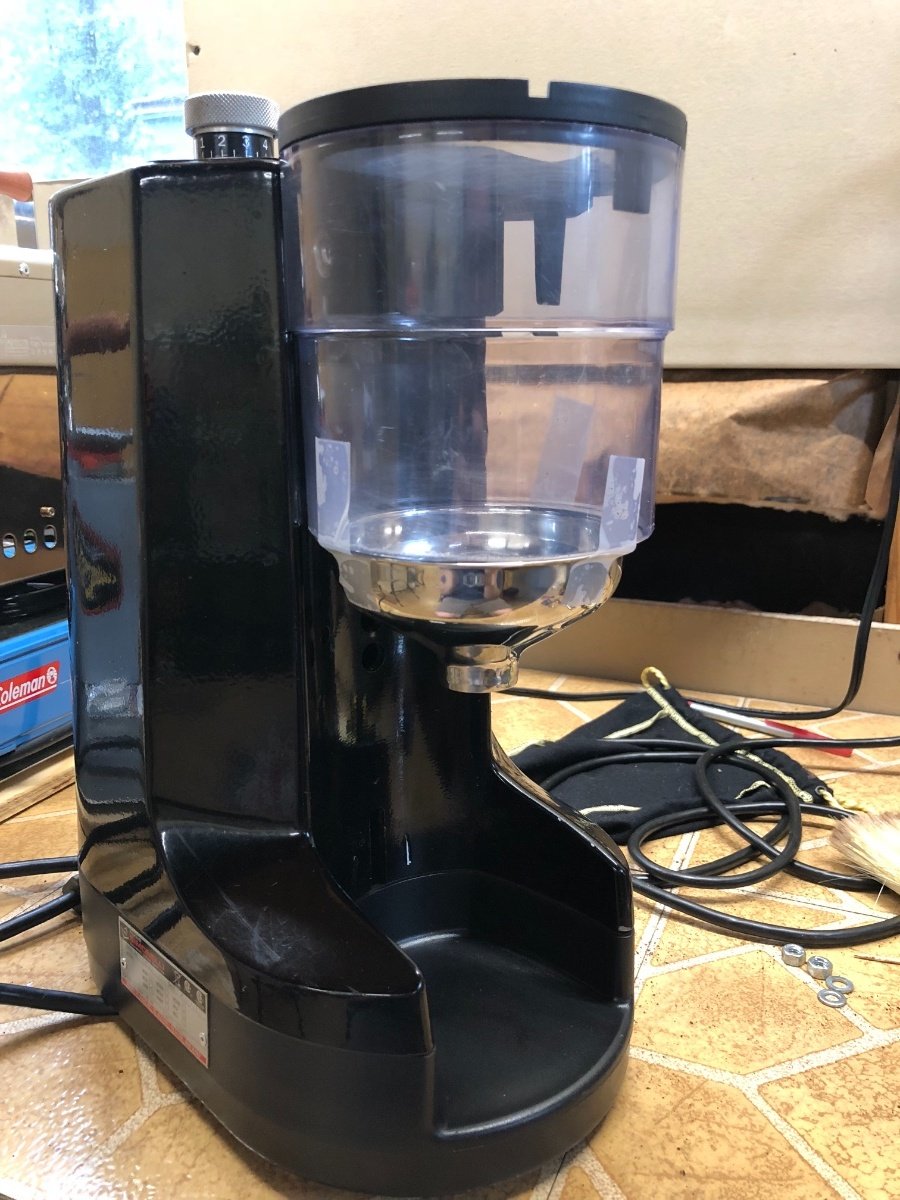 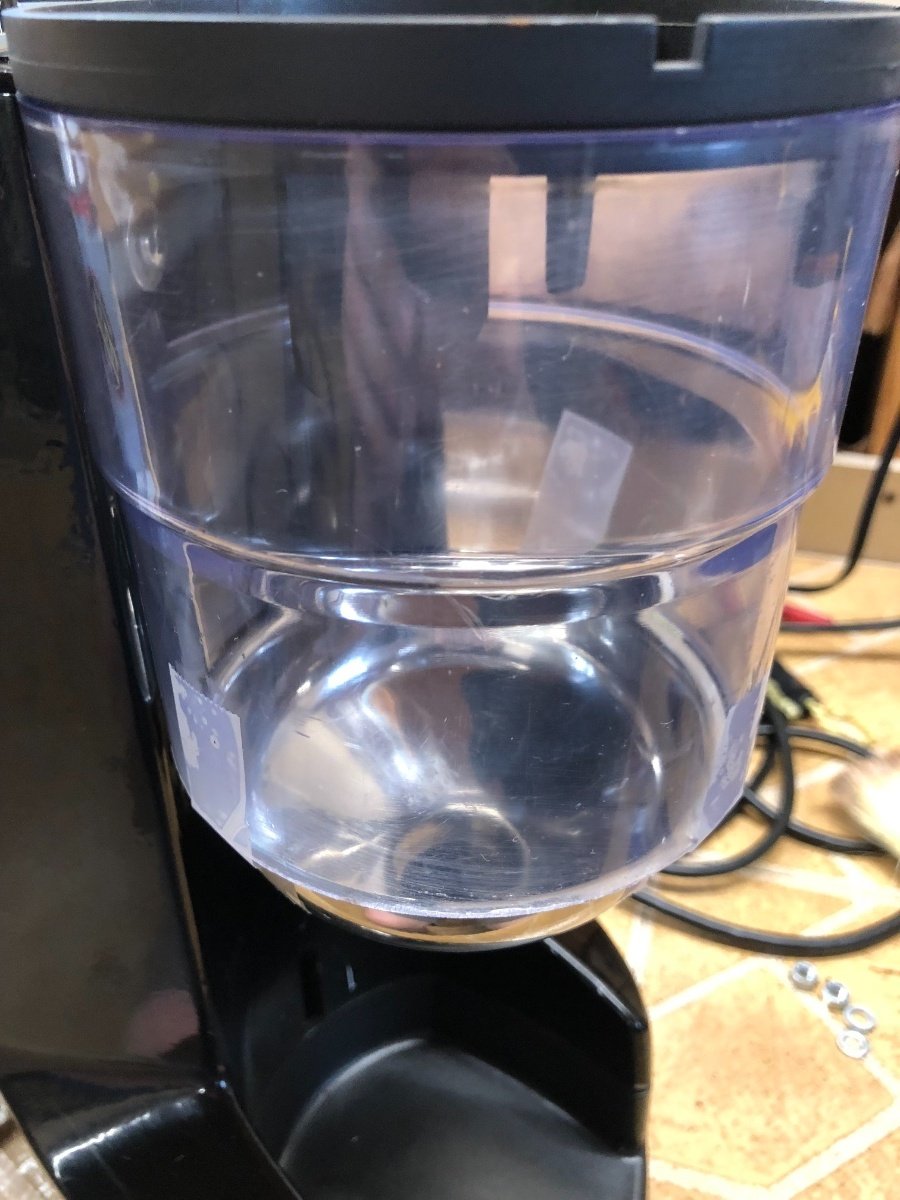 Ill be interested to see how much sticks to the sides.
Top

I left the flap in which helps direct the grinds down towards the funnel. Also grounds accumulated slightly where my finger is pointing but two knuckle taps to the grinder released them. I will likely move the funnel up to the line midway up and cut the clear shorter, but I want to test it more before I start cutting the plastic up. 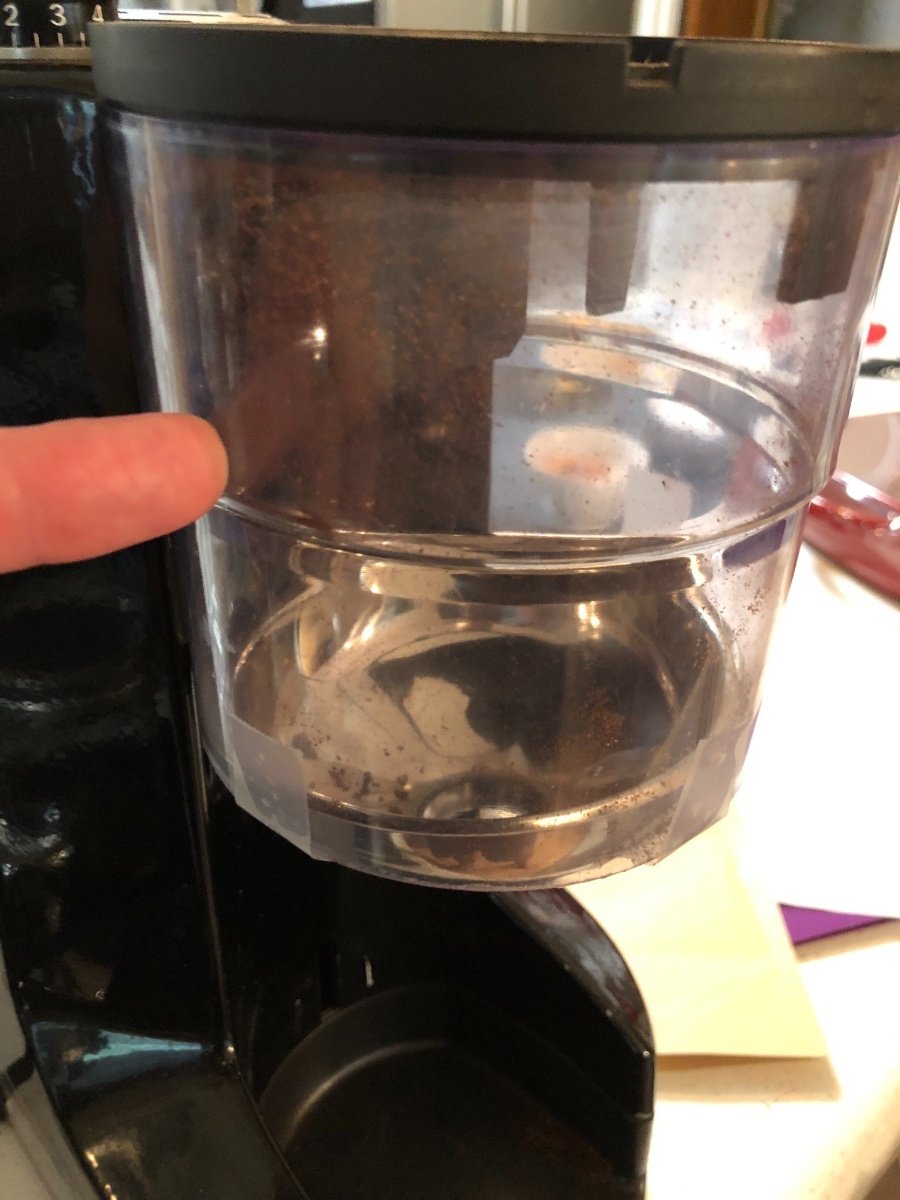 Look at this piece from the new G-60- might be helpful.
Assuming the body is the same as the MDX it looks like NS copied my idea of stripped down version of the MDX!
https://www.espressoparts.com/g60-22?gc ... LrEALw_wcB

Thats nice- are you the designer?
Wonder how it works- judging by the velocity my grinds come out at I would think that design would spray all over.
Top

Not mine, I just figured someone had already done it
Top

The 3D printed chute is mine. It's not perfect, but does mostly direct the grounds.

I'm not a fan of blocking off the top slot because otherwise grounds tend to collect up there and stay - then randomly chunks will fall out into my fresh grounds.

My MDX really doesn't fit my lifestyle well at all - it's a fine grinder for a shop or a household with multiple coffee drinkers. But I'm the only coffee drinker in my house and I only have an espresso or two per day max. But I got the grinder for $70 from a shop who's owner was retiring (and I suspect never once cleaned the grinder the whole time his shop was open) and it was too good of a deal to pass up. It came with the doser but I can't bring myself to use it since it wastes more coffee than I use in a day just to grind enough for one shot.

I originally carved a new chute out of wood that I've been using for the past 8 or 9 years, it worked...but wasn't optimal as it would clog up very easily and still let a lot of the grounds collect in the throat and there was no way to clear them out without removing it which was a pain.

So the 3D printed one is marginally better - it doesn't direct the grounds quite as well as my wooden one did...but it doesn't clog and with the front open I can stick a chopstick or handle of a spoon up there and dislodge the grounds that don't get blown through completely.

I'd still like to improve it to control the grounds better...but haven't come up with any ideas that also solve the issue of them collecting in the throat area.
Top
← Back •
By accessing this site, you agree to the site's terms of service. If you need help with the site, please contact us.