The guys over in Sydney are doing some very interesting testing over on instagram. I'm surprised it hasn't popped up here yet: 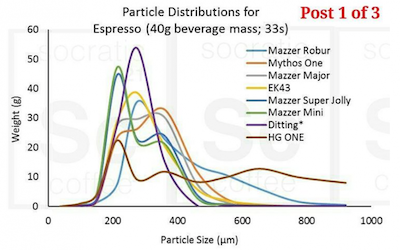 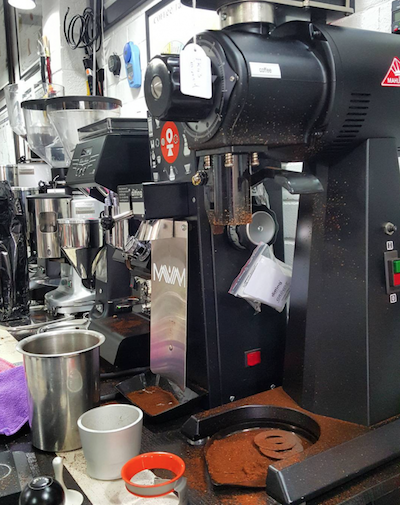 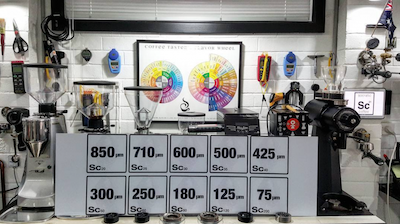 Apparently they're not using the known laser diffraction method but a sifting protocol. They explain why here: https://www.instagram.com/p/-y8akpSuLq/ ... aticcoffee

Pretty surprised with the HG-1 result as I know, judging just by taste, I prefer it to my old Mazzer Mini by a fair margin. And impressed with the Ditting.

Super interesting results. I wouldn't be surprised if that HG-1 is out of alignment (quite obvious ain't it?).
Top

According to their post, the owner of that unit stated that the TiN coated burrs were fairly new.

Question then becomes, how many lb of coffee does it take to get the burrs to tone. Sounds to me like they should either come pre seasoned or rather go with the regular mazzer burrs.
Top

Its interesting, but what about the taste? They should have done some blind taste testing on espresso pulled to grade it as well otherwise its just mechanical exercise that does not tell how and if this at all correlates to taste.
Top

Well, taste is always going to be subjective, unless you include so many subjects that individual preferences become negligible.

Grinders are a very technical thing, so I don't mind the strictly technical approach towards grinder performance. They're supposed to grind as uniformly as possible and it's interesting to see that some are up to the task more than others.

And it's also interesting that this experience correlates with some subjective, taste-based opinions. I remember someone (was it Jim Hoffmann?) giving a speech about how cafés only prefer the Robur because they have to pour away less shots if they go by the numbers - if they were to try every shot, they'd prefer burr grinders. Less accurate (all over the place) grounds would probably result in easier reproduction for espresso whereas more accurate grounds would require more attention during preparation (grind and dose matter more if there's a lower amount of fines that's going to clog up the basket to a degree anyways).

This would explain why I haven't had to pour away a single shot once I found a start-point for espresso on my HG-1. It doesn't really explain why I prefer the taste to the Mazzer Mini that I've owned and used daily for half a decade, however. Unless the Cremina is so hard to master that it requires more leeway from grounds that are more all-over-the-place. But that seems cynical and I'd much prefer to rather think I've mastered that machine after all those years.

They have not shown any real reason why the sieving tests are suitable for coffee grinder analysis. They have just given a few reasons why laser diffractometers aren't really suitable, but also raised a few points against sieving. They did not show that there is a measurable difference between two samples, that can correlate to taste.

A possible way to do this would be to replicate an ek43 shot by taking portions of sieved robur grounds. Until they do that, or something similar, then they're just producing noise, and everybody who is drawing conclusions based on that graph is being suckered by pretty pictures.
LMWDP #232
"Though I Fly Through the Valley of Death I Shall Fear No Evil For I am at 80,000 Feet and Climbing."
Top

I applaud them for their research! I don't think it's appropriate to say "they should have done this or that" when looking at new research data. They are trying to give us more info about what makes a good grinder for espresso, and have even with their initial data.

What it actually means at this point is indeed uncertain, but the nature of research is obtain data, see what it means, refine the data or the way it's obtained, and hone in to helpful information. Useful information is often gained one small step at a time. We don't often get the final answer to our query on the first question.

Is there room to build on this data? Absolutely! Does this sponsor subsequent questions that will further enhance our knowledge? Absolutely!

Should they have waited to look uniquely at this question of grind size and distribution until they could coordinate that data with blind tasting or other variables? Absolutely not. I say, "Test on!"
Top

SAB wrote:They are trying to give us more info about what makes a good grinder for espresso, and have even with their initial data.

So how do you do that if you don't taste the espresso? Its impossible.
Top

dergitarrist wrote:They're supposed to grind as uniformly as possible and it's interesting to see that some are up to the task more than others.

How do we know that, is there a taste study that showed that "more" unimodal grind tastes better for espresso? I'm genuinely curios.
Top

I sure wish the k30 was on this test. It's interesting data for sure. I look at it from a consistency stand point.
LMWDP #544
Top
← Back •
By accessing this site, you agree to the site's terms of service. If you need help with the site, please contact us.