ds wrote:So how do you do that if you don't taste the espresso? Its impossible.

Of course, apart from taste, we don't know what it yet means. But you don't have to get all the info in a single package.

They're finding out what grind profiles different grinders have. This has nothing to do with taste within the confines of this test.

They're just dialing in the grinders pulling shots just so the grinders are set to comparable, real world settings. Of course, this has implications for taste but that's not what this research is primarily focussed on. The question here is not "which grinder produces the best tasting shot?" but simply: "which grinder delivers what kind of distribution?"

There are going to be correlations between those two questions but their research is focussed on question #2. The theory behind what that means for question #1 should really be discussed outside of the actual research they're doing but anyway: My understanding is that a grind that is all over the place is going to result in under- and overextraction at the same time with a fair amount of proper extraction in there. How large that share of proper grounds is (the large hump in the graph) determines how good a grinder is according to this hypothesis.

Now, of course no grinder is going to produce a perfect 18g of 200µm particles. That's NASA stuff right there. An almost perfect result would look similar to that Ditting curve with, say 80% of the grounds within the 170-230µm range. Great. If you have a Mazzer Mini, however, you're only going to get 40-50% in that range and then, say, 30-40% around 350-450µm and another 20% or so all over the place. That shot is still going to be good, because 40-50% of the coffee are properly extracted. The rest, however, will either be over- or underextracted and you'll probably taste that. It's always a mix between *both*, over- and underextraction. If overextraction dominates, you might grind more coarsely but that'll also move the 40-50% of "proper" grounds away from the optimal range, so you'll go back and you're never able to absolutely nail it. You'll never know the full potential of that bean, *if* uniform grind size distribution is indeed optimal - we don't know that yet! Some people might argue you need fines to seal a puck properly...

An early hypothesis, looking at their data, would be that burr grinders have two humps: 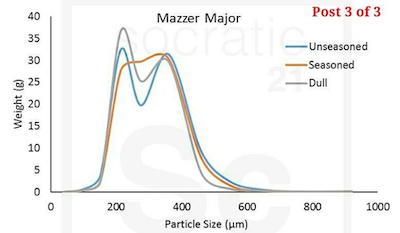 While konical grinders have one larger hump and then a fair mess of larger particles: 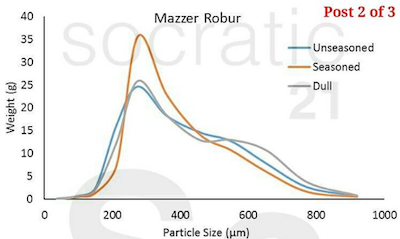 It seems that the Robur has a larger portion of "proper" grounds and then some larger particles that are going to be underextracted. It could be that that cup tastes better because there's more "proper" extraction happening and the larger grounds don't matter as much and just result in a thinner cup. It could also be that the optimal setting for the Major is between those humps as it appears to become smaller with seasoned burrs... Now, this is where taste testing would come in. But it'd be educated taste testing at this point, not just "I prefer this grinder, I don't know why, who cares?"

So, tl;dr: Kudos to them. If we try the same coffee from different grinders in the future and clearly prefer one, this data might put us in a position to make an educated guess as to why.
LMWDP #324
Top

Bluecold wrote:They have not shown any real reason why the seiving tests are suitable for coffee grinder analysis. They have just given a few reasons why laser diffractometers aren't really suitbale, but also raised a few points against seiving. They did not show that there is a measurable difference between two samples, that can correlate to taste.

A possible way to do this would be to replicate an ek43 shot by taking portions of seived robur grounds. Until they do that, or something similar, then they're just producing noise, and everybody who is drawing conclusions based on that graph is being suckered by pretty pictures.

Given previous history of Instagram pics from Socratic, I prefer to wait for the full report to be posted on their website.
What I'm interested in is my worst espresso being fantastic - James Hoffmann
Top

dergitarrist wrote:They're finding out what grind profiles different grinders have. This has nothing to do with taste within the confines of this test.

Until they can show that sieving accurately defines the grind profile of the grinder (they haven't), they're just producing graphs based on a test protocol.
I can make a lot of graphs as well. I could find out the angle of repose of a set of ground coffee. I could find out how much friction two glass plates have for a given dose of coffee between them, I could use an air blast to find out how far I can blow a given dose of coffee and what the spread is.

Point is, making graphs and pictures isn't hard. It's also not hard to come up with potential explanations for a given behaviour.
But unless you know the boundaries of your method, you're not producing useful data.

No they are not, the only thing they're answering is what happens when you sieve grinds in their machine and weigh the result. How this pertains to distribution is barely defined, let alone taste (on which you go on a huge tangent for the rest of your comment).

If we try the same coffee from different grinders in the future and clearly prefer one, this data might put us in a position to make an educated guess as to why.

It will only allow internet forum armchair analysts to make smart sounding guesses.

If Socratic coffee does post convincing evidence that their testing protocol has merit, then I'm of course very interested in the data.
LMWDP #232
"Though I Fly Through the Valley of Death I Shall Fear No Evil For I am at 80,000 Feet and Climbing."
Top

fair enough... of course there's more to grind quality than just particle distribution (for instance: shape, surface area, does coffee get cut, broken or literally ground down and what does that mean when it comes into contact with water?), and of course the test method needs validation. All very valid points.

Nevertheless, I just appreciate the fact that they're not simply giving up on understanding what makes a good grinder like large parts of the industry (grinder manufacturers as well as roasters and cafés) appear to have for the past four or five decades. Granted, there are exciting new grinders and hypotheses out there, these days, and it's really picked up in the last 3-5 years or so but before that, it was staggering how unchanged grinders had remained for so long.
LMWDP #324
Top

ds wrote:So how do you do that if you don't taste the espresso? Its impossible.

This is from the first results post. A possible explanation from delanocoffee:

"Taste is pretty subjective. But from what we have read and heard (cue Rao, Kaminsky and Perger) is that particle distribution is really about reproducibility. Having a grinder that cuts coffee into a very tight particle spread (ditting) gives a very accurate surface area over and over again. Water when acting as a solvent only strips from the surface area of the ground coffee. Grinders that have even minor fluctuations in the fines (dust) and boulders (large chunks) change the overall surface area quite rapidly, which will change the yield and flavour of whatever coffee you use, each time you produce an espresso. Looking at that graph the Ditting is the grinder to use if you want to produce the same espresso (yield and flavour) over and over again."

I know I could argue with this if I was so inclined, but since I'm totally in love with my new (to me) Ditting 804 I'm taking it as confirmation of my purchasing wisdom.

Loving my 804 too! I bought it mainly as a brew grinder but do play around with it for espresso too.
Top

I agree, this study is about the grinder particle distribution and taste is very subjective. Even if you dig into the method, the sieve method would not provide the same result as laser diffraction method due to limited bin size and tendency for agglomeration.
If you just look into the graph unimodality the Ditting stood out the most but that's not the whole story. A while back on periscope Tim Wendelboe explained his method of grinding the same beans in Ditting KR 804 and EK43. I think he specifically mentioned that he uses EK as his high end grinder where he can extract more TDS and the Ditting as a more "normal" grinder to make sure that his coffee tastes good for both end of spectrum.
Top

dergitarrist wrote:Grinders are a very technical thing, so I don't mind the strictly technical approach towards grinder performance. They're supposed to grind as uniformly as possible and it's interesting to see that some are up to the task more than others.

Says who? I want a grinder that makes good tasting espresso. I couldn't care less about technical specifications like this unless they directly relate to improved taste, reliability, or functionality.

Based on these "technical specifications" the Mazzer Mini is better than the HG-1? Nonsense. That just goes to show that these distributions are not directly related to taste, at least in any as yet discernible way.
Top
← Back •
By accessing this site, you agree to the site's terms of service. If you need help with the site, please contact us.