Grinder burrs touching is the "kiss of death"?

I did a bad thing. Don't do this at home.

I have a Rancilio MD-40 grinder (same burrs as Rocky).

While my grinder was running... I was dialing quickly from my mocha pot setting to my espresso grind setting and (to make a long story short) I went past my "zero" mark ...

... and then I heard a metal-on-metal grinding sound for the couple of seconds it took for my motor to wind down after I quickly hit the power button.

Since this has happened, my shots are running about 10 seconds faster at the same grinder setting.

So... my question for those who have the courage to admit they have done the same thing:
Should I bother to try to fix my dial-in by going finer, or should I and just suck it up and get new burrs (and save the coffee)?

Sorry to hear about your damaged grinder. While I've never done that with a grinder, if I did it I think I'd get new burrs (gosh, I sound like OJ).

But first you might disassemble the machine (like you were doing a cleaning) to inspect the burrs and see how bad the damage is. Ultimately, whether it makes sense to replace the burrs is a matter of how much the damage has affected the functionality of the machine. If a slight adjustment results in a pour that is equally good to what you had before, then maybe it's okay to just leave it.

BTW, lots of people say "The machine should always be running when you adjust the grind." I had a Rocky and I recall the Rancilio manual specifically stating that you should NEVER adjust the grinder with the motor running. This is a good example of why that's good advice. Never mind that it is also the advice of the people who designed and built the machine.

Good luck with fixing your grinder.

Indeed, if I did it, the sharp cutting edges should not be damaged because they are below the burrs' parallel faces: 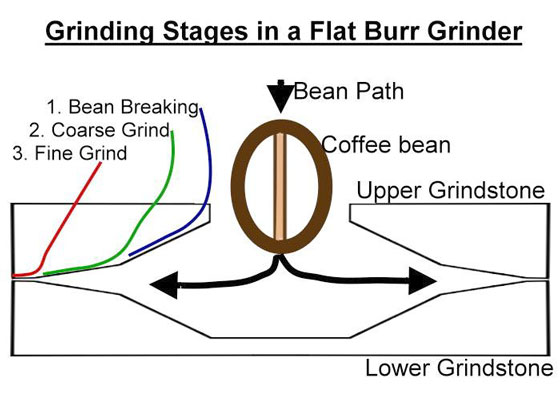 I have not used that grinder, but as Dan points out, there is usually a flat, smooth, non cutting surface between the burrs. While that flat edge surface may touch, the cutting portion of the burrs should be OK. I would think you would have to really crank them down tight to do any real damage.

Are you using a new batch of coffee? That could simply be the cause of your change in extraction. This time of year (winter) my grind changes from day to day with the humidity.

If you do replace them, just be glad you do not have the ceramic burr sets that the LM Swift uses, $170! Ouch. 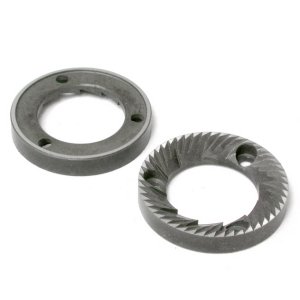 How bad was the grinding noise? Did the burrs jam and stall the grinder motor? Did any metal get ground off the burrs?

I think here on home barista there was a pretty in depth thread on flat burr design and conical burr. As Dan pointed out it looks like all burr sets have cutting zones and the zone that touches when you adjust fine enough to make contact is an outer flat zone. I don't know if you can go so tight that you'd ruin your burrs before the motor stalled. I mean the noise of metal on metal stops me as soon as I hear it and by reflex I back off. Maybe if metal breaks off and falls into the grinder. I had a Rocky and now a Macap and with each I found the zero point with the grinder running by going fine until the burrs contacted then backing off. There was no noticeable damage to the burrs that caused grind changes.

With the Rocky over time I had to go finer and finer to get the same pour rate but that was a gradual dulling of the burrs from grinding coffee, I'm sure. Extraction timing off from normal could be dulled burrs but it might be something else as cannonfodder pointed out.
Top

unidonburi wrote:
Since this has happened, my shots are running about 10 seconds faster at the same grinder setting.

So... my question for those who have the courage to admit they have done the same thing:
Should I bother to try to fix my dial-in by going finer, or should I and just suck it up and get new burrs (and save the coffee)?

I would be really surprised if the burrs are damaged, just dial it a bit finer and forget about it unless you can't get a good grind anymore.

It may be that by bringing them close together, you have caused them to seat a little differently, thus changing the settings? Without seeing the inside of that make of grinder it's just a guess.

A Chipped burr is another matter entirely. A friend of mine bought his Macap MC4 to my house to "compare" the grind with my Mazzer. I told him I thought the grind was very slightly inconsistent, and there was more of channeling/early blonding. I opened the grinder up and inspected the burrs, only 1 of them had a small chip out of it. He then let on that he knew this as metal had gone into the grinder, but didn't want to tell me, in case it affected my judgment of grind. I personally was really surprised that such a small chip on a single burr could make a difference detectable in the shot!

Your "accident" should not have chipped a burr or even allowed the cutting teeth to contact, so no worries (hopefully).

Dave
Top
← Back
By accessing this site, you agree to the site's terms of service. If you need help with the site, please contact us.